Here is a project I did earlier this year prior to my 7W NUBM44 Maglite build. I had a couple of weeks off work and wanted to try something that could be done without the assistance of a machine shop.
The host (if you want to call it that), was an “Aluminum DIY Project Box Enclosure Case” found on eBay.
The small storage case (pictured below) was a near perfect fit for this project and was purchased from Harbor Freight for about $12 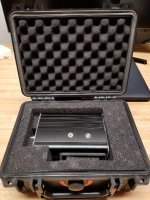 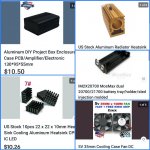 Because I have more than a few, I intended on using DTRs Nidec projector-harvested fans for this build, but unfortunately they did not fit in this particular enclosure. I did end up using them inside an old ABS RadioShack hobby box to cool off my test builds and test loads. They definitely move the air for their size! 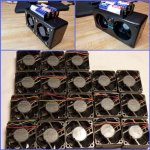 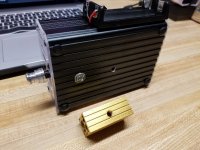 The front and rear panels were made from some scrap Lexan, which were cutout and shaped using a various dremel attachments and a small hole saw for the fans. I added a 5V regulator circuit using an L7805 to power the 5V fans. The driver, which is thermally adhered to the small heatsink, is also attached to the aluminum radiator using thermal tape. For power, I drilled the "20700 MosMax Dual Battery Tray" to the side of the enclosure. 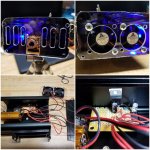 I was hoping this build would be able to keep a NUBM44-V2 running cool, but unfortunately the 5V fans, simply don't move enough air. Also, the "aluminum radiator heatsinks" claim to be 12mm, but unlike the DTR copper modules (which are dead on 12mm) the inside diameter of the radiator is about 12.30mm. While this may not seem like alot, you do need a good bit of thermal compound around the copper module for heat dissipation. But it still won't be 100% effective, since its not making proper contact. I don't think this would be as big of an issue if I was using a lower power laser, or one that doesn't immediately generate so much heat! So I wouldn't recommend using project for anything over maybe a watt or two.

Here is a short video that I put together of the project, measuring the output and burning a couple things.
The diode used was NUBM44-V2 with the driver set at 4.5A and a G-8 Lens.
Also, since I'm using this high powered diode in this enclosure, it is not properly dissipating the intense heat that is generated, so the output in this test doesn't want to settle.


And here is a handful of beamshots! 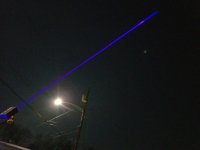 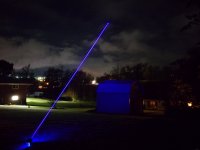 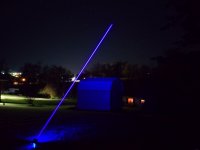 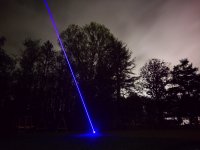