Is there a cheap laser pointer recommended, preferably visible to the naked eye. 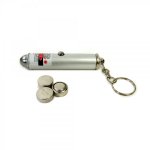 this should do trick
B

Sure. What are you hoping to do with it, though?

I've bought tons of them. Most of them are garbage-tier quality, but every once in a while I come across a good one. Most of them are obviously unbranded, but the Radio Shack ones are pretty good- not sure if they're in production anymore, and probably not really that "cheap."

On the other hand, I recently acquired a "Laser 202" from China and it is phenomenal quality considering it cost me under ten dollars.

1. Stay away from 532 nm green. Cheap pointers don't use a good IR filter or sometimes no IR filter at all, so your 5 mW of green might also have an eye-injury-inducing 100 mW of infrared. Be very careful.
2. Stay away from 405 nm violet, as this wavelength is barely visible to the human eye. To compensate, manufacturers often drive the diodes well above the safety limit. The first of these I bought was marked 5 mW, but was actually almost 100 mW, according to LPM. Even the dimmest one I have is around 30 mW. This wavelength is potentially very dangerous to humans and animals, as it catalyzes chemical reactions at the cellular level.
3. Be wary of anything green or blue, as the wavelengths and power levels of those are also very often misrepresented.

So that pretty much leaves the safe bet as the 638/650/660 nm reds. You can find them at pet stores, gas stations, online retailers, etc. 638 nm appears brighter, because the human eye is more sensitive to it than longer wavelengths, but 650 nm is by far the most common, and is perfectly visible indoors even at ~0.5 mW.

Also remember that any laser light is potentially harmful to your eyes. Never, ever, point a laser directly at your eye, no matter what the power rating is! Also don't point the laser at anything shiny, including water, which could reflect the beam back at you. Higher powered lasers (like the ones I warned about above) can blind you just from looking at the beam reflected off of matted surfaces, even.