Not new to the high power blue laser game but I just got a low cost blue laser engraver for my projects. (proto pcbs, labeling enclosures, etc)

The unit I got has a laser head (black one in attached pics) rated for 5500mW optical power. Right out of the box, used my Ophir LPM, it did about 5800mW at turn on and drops to about 5600mW steady state which is a good sign and I was happy.

About 4 hours total use (testing, trials, experiments on settings), I did another LPM test and it had dropped to 5000mW.

I did another 4.5hour engraving task (A3 sized photo onto wood) at about 70% power due to it being light colored, lower powers won't touch it, max power is now at only 4600mW.

The lens appears to still be clean, I can't see any smoke residue or dirt.

Reading about cheap engravers, the common trend I see is that the diodes are over driven.

Now for the fun part: I did some quick tests, the driver pushes about 3.8A to the laser diode and looking at the diodes available on DTR's site, the 7W NUBM44 diode should push about 6.4W at 3.8A. With the 3.5W NDB7A75 overdriven at 3.8A put out a little over 5W which confirms that my diode is most probably overdriven too.

I was looking to upgrade to the blue one (image attached) which is also 5500mW but fixed focus and is said to include FAC for a better beam/spot shape but the overdriven diode concern is still there.

The other option I was thinking was to get the 7W diode from DTR and slap it onto the stock head for better reliability.

Price wise, the 7W bare diode will cost about the same as the complete FAC laser head with sliding mount.

Why not just keep on using it at low power? Well, I bought a high power laser I want to be able to use the full power capability.

And also not worry about lifetime when I really needed the power to engrave or cut more difficult materials.

Another thing to consider is that the 7W diode has a much bigger (wider) spot so resolution might suffer a bit when engraving small texts. The FAC head should be pretty good in this regard.

Thoughts? Comments? Any help is appreciated

Had a look inside the heatsink and the diode is pressed into a copper module which is threaded into the black aluminum heatsink. Back of the diode is bare with a bunch of silicone gunk. It appears to use a standard 9mm diode case so it is easy to get a replacement. Will be a pain to press the old diode out though.

Removing the lens, I can see it is a single element glass lens and the front of the 9mm diode is bare (no can). The thread of the lens holder has two white o rings to give a firm focus feel and keep it in place while the machine is engraving.

Fan is a good quality Delta brand but appears to be from used gear. Parts and machining is nice, it's just that the diode is overdriven.

I like the driver board. It has two buttons, one turns on the laser at full power for testing, the other turns it on at really low current so that I can focus it without blinding myself or burning a hole on the table.

I modified the fan and driver board mounting so that there will be more airflow. The original design had the PCB sit too close to the inlet of the fan.

The original laser head has dropped to about 3W with 4A diode input. After doing some reading here, it appears the cause is an exposed diode which degrades with exposure to the environment.

I looked for other brands and came across NEJE which seems reputable so I bought one of the cheaper heads to try out and use for the meantime.
It was advertised as 5.5W optical output but I measured only 4W which was a shame. But these are also said to have been burned in at full power for 48hrs so we shall see how long until this starts to show some power loss.

But optics seem really good, the burn spot size is pretty small and round for a multimode diode. (It was advertised as using the NUBM0A "with NEJE Cap technology" diode at 3.2A) much smaller than the bar shape the old head was doing.

NEJE also has a dual diode with 15W optical output with FAC which looks interesting but way out of my price range. Maybe someday when I start earning some cash using this machine.

I'll still eventually get the 7W diode from DTR as budget permits and install it in the old head for high power needs.

NUBM0A is basically a NUBM44 that comes with a Gball cap but NEJE replaces the cap with a window can, if they backfill it with inert gass it should last a long time but I have not tested their product yet, however here are their diodes at a decent price, I do have a FAC nubm08 which makes a much tighter cutting spot but uses a different focus lens, opticsid I think has them IINM 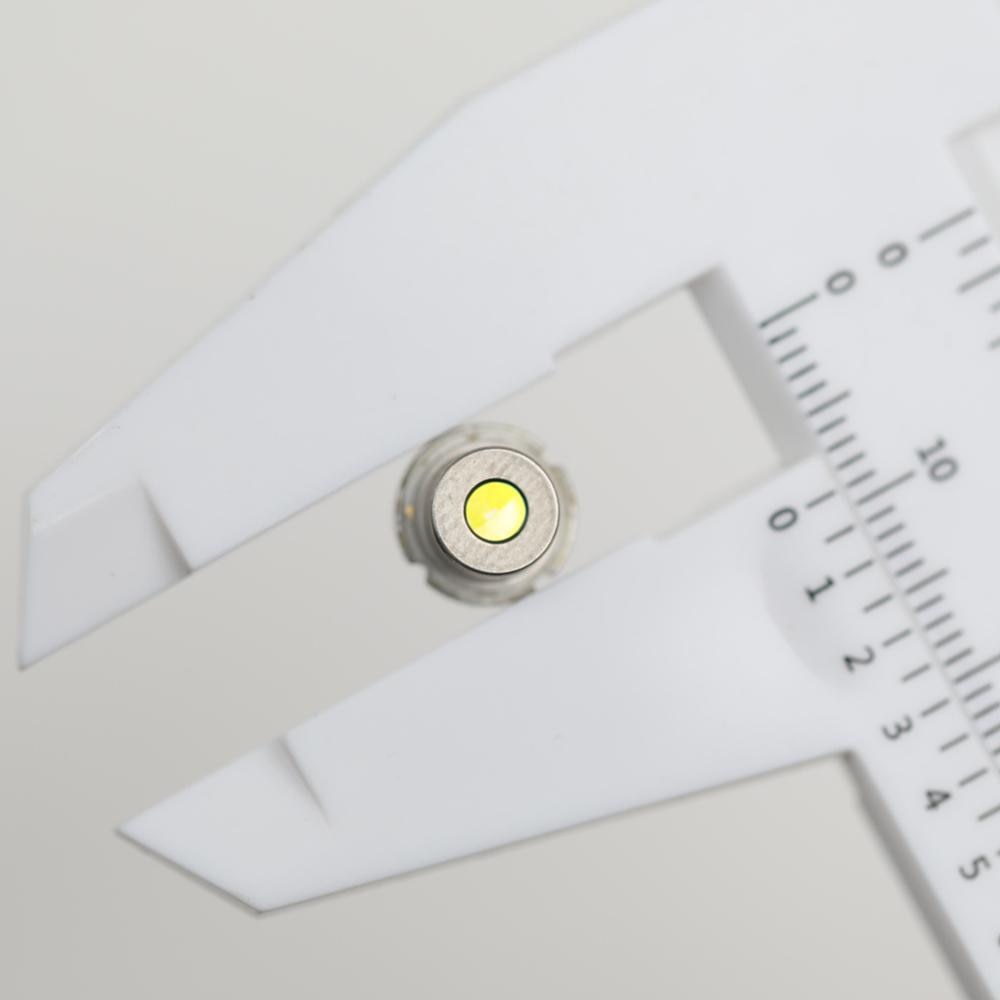 
Here's a laser diode which should be a NUBM08 with a FAC fiber and window can plus backfill, you need to use a longer FL lens but you will get a much smaller cutting spot. Note: Your working distance between your head and work piece will be longer. 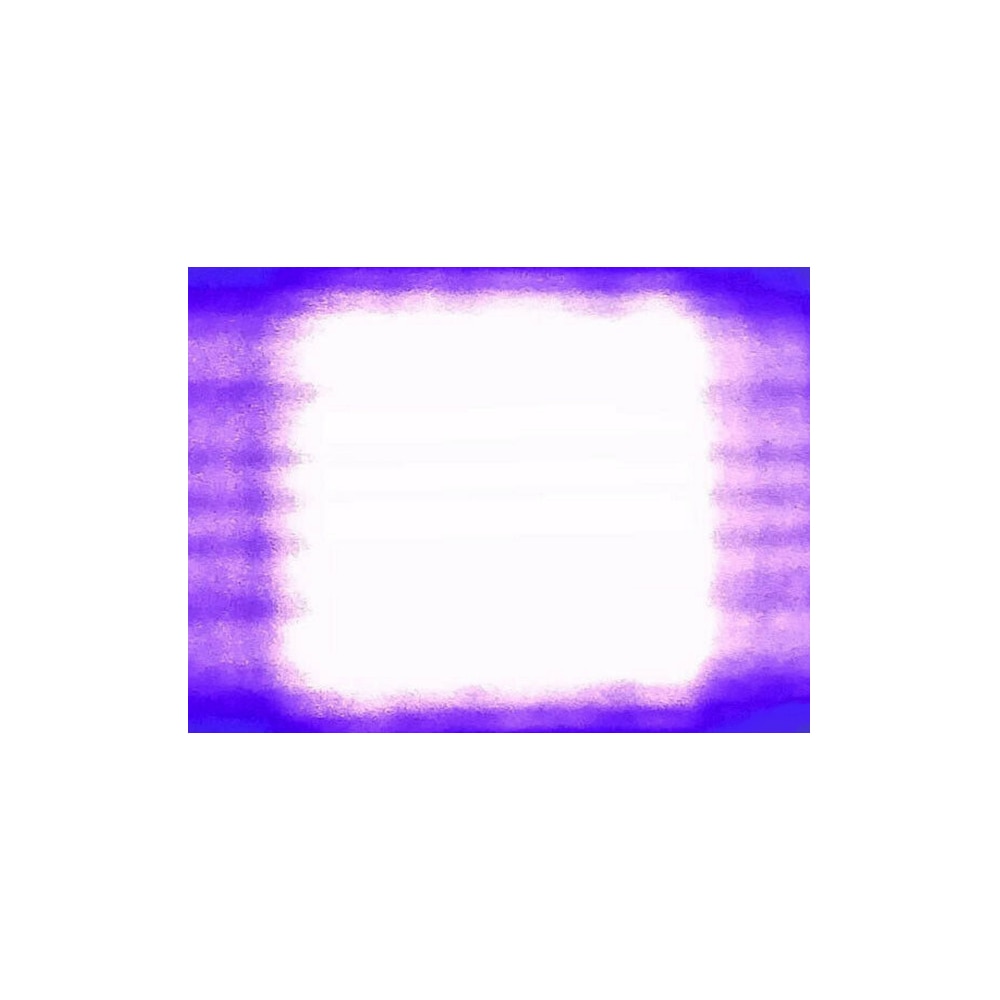 I thought this might use the laser diode with added FAC and window can and the drawing shows two diodes PBS combined so it might be an actual 12-14w...the 80w rating is no doubt a gross exaggeration but if there the FAC diodes then it should do well. 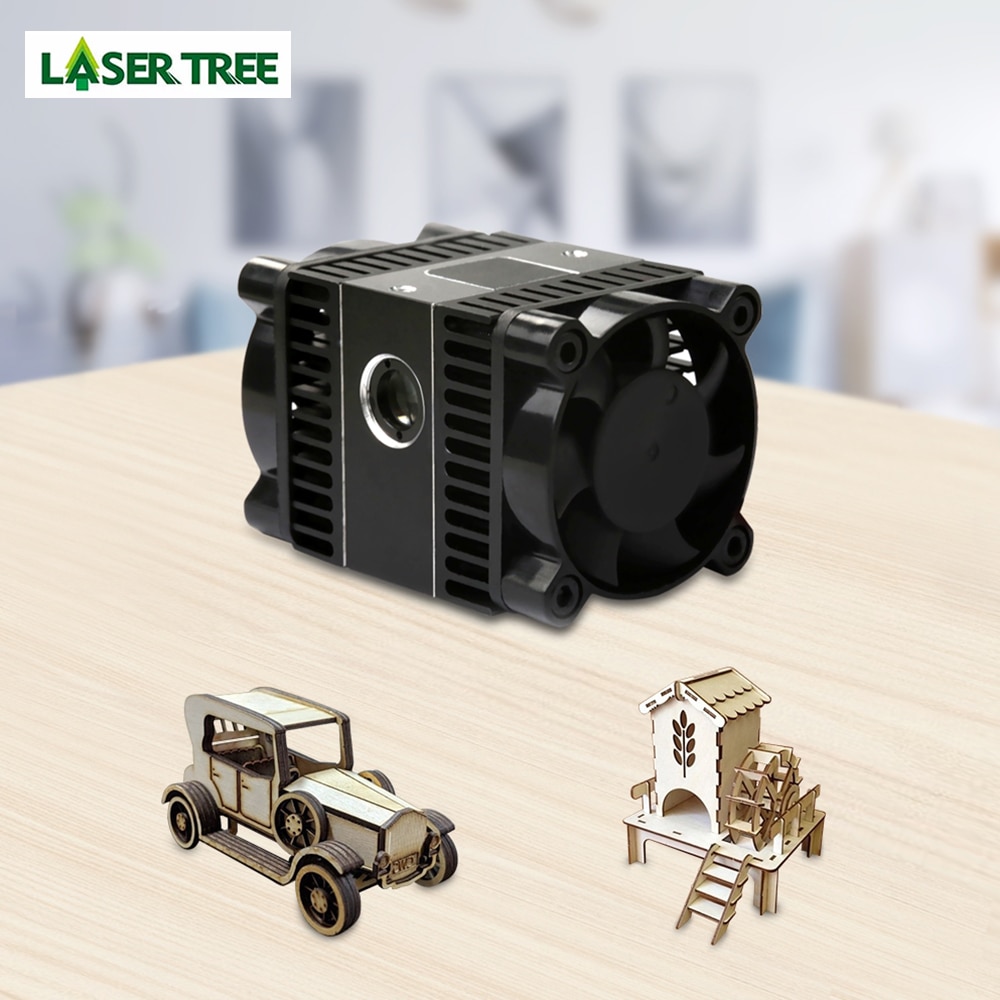 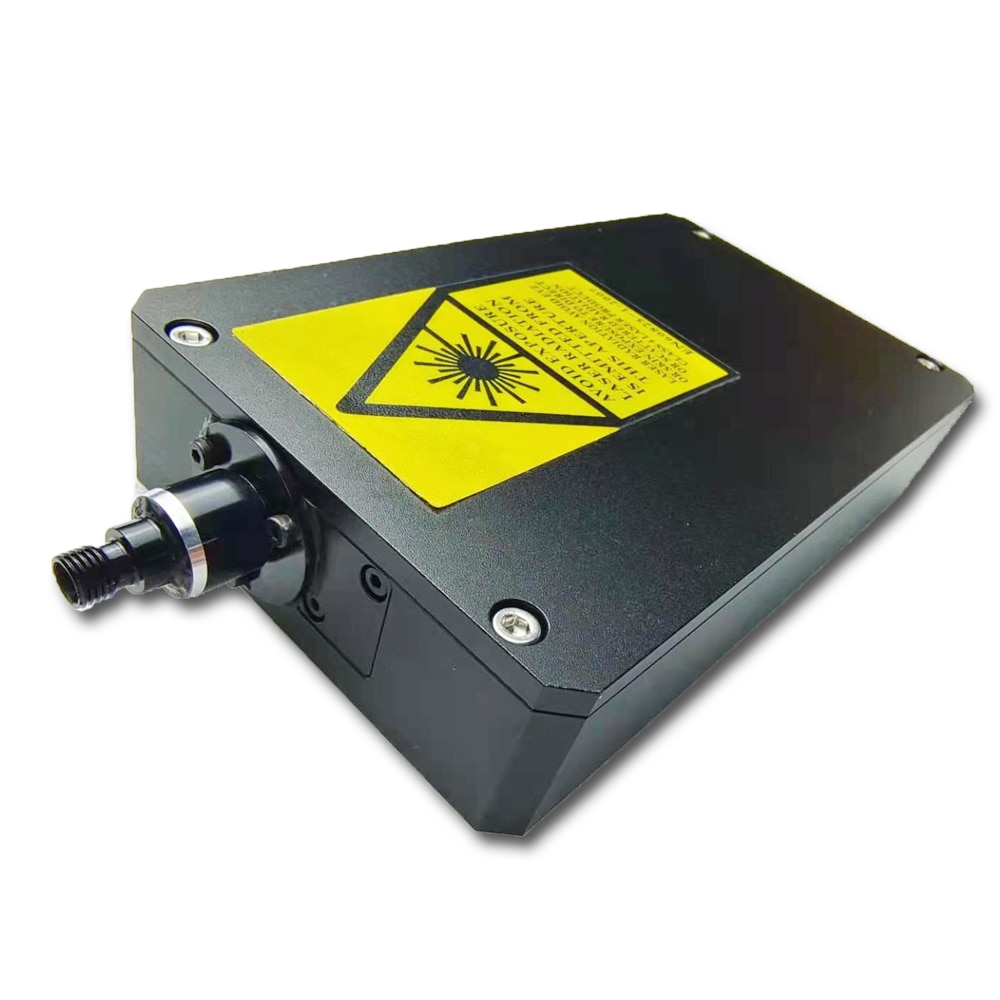 RedCowboy said:
NUBM0A is basically a NUBM44 that comes with a Gball cap but NEJE replaces the cap with a window can, if they backfill it with inert gass it should last a long time but I have not tested their product yet, however here are their diodes at a decent price, I do have a FAC nubm08 which makes a much tighter cutting spot but uses a different focus lens, opticsid I think has them IINM
Click to expand...

No mention of backfill but with an advertised 48H burn in at full power with no degradation, I guess it should be fine for a while. Some limited testing and regular monitoring of output power every burn job, it seems to be stable and keeping its output power more stably than the original.

Here's a laser diode which should be a NUBM08 with a FAC fiber and window can plus backfill, you need to use a longer FL lens but you will get a much smaller cutting spot. Note: Your working distance between your head and work piece will be longer.
Click to expand...

This looks interesting and not too out of reach of budget. I might get one or a couple to play with, thanks! Not sure about the original head's lens but it can be focused to burn at about 5 to 6in from the aperture. Though this diode is rated at 3.5A and the original driver pushes 4A. It might be no issue but I can drop it to 3.5A easily if I have to. A small spot seems to be more important than brute force power. The machine has about 5in of distance from the aperture to the table surface, if I need more room, the head could be mounted with two screws instead of 4 and add about 1.5in of additional distance.

I thought this might use the laser diode with added FAC and window can and the drawing shows two diodes PBS combined so it might be an actual 12-14w...the 80w rating is no doubt a gross exaggeration but if there the FAC diodes then it should do well.
Click to expand...

I'm thinking the 80W spec is DC power input but still too high. NEJE also has a 15W output head with beam combiner and FAC rated at only 40W input and costs a bit less than what you have linked. A youtube review seems to show it performs well engraving and cutting but no LPM testing.

Well above the budget, would be fun to play with though

As per RedCowboy's suggestion, I went ahead and bought the 5W diode with FAC.

I mashed the old diode out since there was only a small hole to push it back where it came from. It still lights up but only LED mode. I pushed full power without heatsinking and the die half attached to the copper slug. 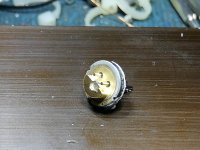 New diode is packaged in an antistatic bag. Pins are new and clean. 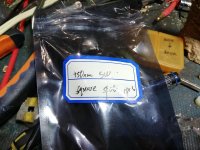 I drilled the inside of the copper heatsink to free up space since the new diode is cased. Took a lot of time to press it properly without applying mechanical shock to the diode case for fear of dislodging the FAC fiber. 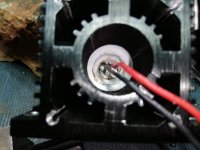 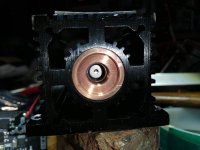 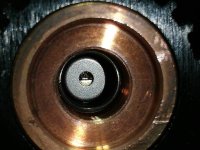 Square spot goodness. The original lens that came with the laser head seems to work fine with the FAC diode. 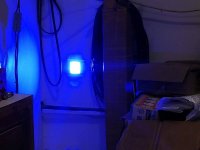 Testing it for output, beam dump is a brick. It melted the brick at the focal point. 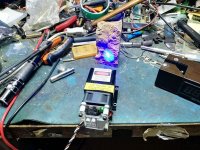 Tested for output power. It does a stable 5.2 to 5.3W in a few minutes runtime with the driver current reduced to 3.36A. They rubbed off the IC markings but I luckily still managed to find the driver datasheet with some googling. It gave me doubt on my pressing of the diode as the heatsink barely gets warm at full output. Removed the lens and used FLIR on both front and back of the 9mm diode case and it seems to keep the temp low. The diode seems to be a good quality high efficiency one. It seems to even run cooler than the NEJE laser head. 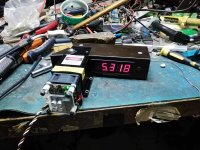 Currently burning some wood to test the spot size, though I need to figure out how to get best focus with the FAC by experimentation. My method on finding perfect focus visually (with goggles on) with non-FAC laser doesn't work here.

** edit/update: I did a power test just to make me feel better with my pressing of the diode. It does 5.3W at 10s after turn on 100% power, and at the 3 minute mark, the heatsink is just about warm and power dropped to 5.1W. Letting it cool back down seems to bring the power back up to 5.3W. Burned a few materials and did some image engraving to practice and power does not seem to degrade so this is a nice upgrade to the old laser head.

The burning spot though is a little bigger than the NEJE so it loses on power density (could not touch anodized aluminum) but makes it up for having a square spot vs a small line, nicer looking "pixels" on the engraved images in wood.
Last edited: Jul 8, 2021
You must log in or register to reply here.
Share:
Facebook Twitter Reddit Pinterest Tumblr WhatsApp Email Share Link