Ben fixes an ILT (was Another ILT arrived today)

Yep its on the fedex truck to be delivered today. So stuck at home waiting for the parcel. This is the 1300ish hour one in my sig. Hope ebay GSP didn't repackage this one so badly that its a box of crushed metal. I've read some real horror stories about their habit of repackaging parcels to reduce volume and thus cost to them to ship - sometimes to the detriment of the parcels contents with glassware ending up broken and fine china smashed to bits.

Its commonly referred to as "The race that stops the nation". everyone wether employed or not stops to watch the race, and even if you're recieving benefits its not too difficult to keep a buck or 3 to place a bet. People stop to watch the race either at work or on big screen tellys at the local public bar. Its an enjoyable afternoon of sillyness. The ladies get dressed up to impress the blokes wearing silly hats with feathers etc. Quite a fun day. Melbourne gets a public holiday for a horse race!

Mabye Lady Luck will be smiling at me and I'll get a working laser and a windfall on the nags!

edit: The laser arrived VERY well packed, and looks in fine nick. I will be testing over the next few days. Pics tomorrow.

For now heres a sneak peek. 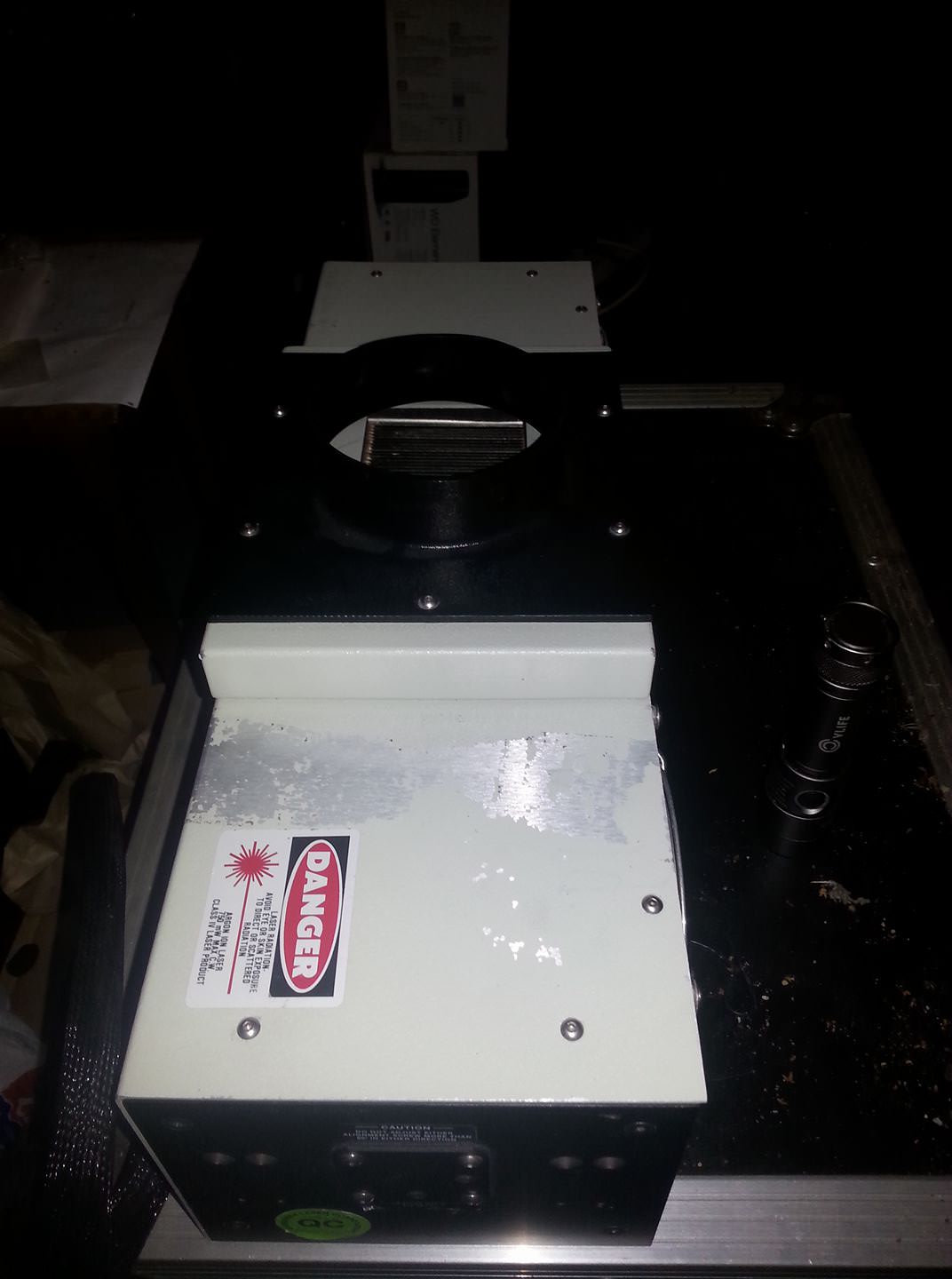 Needs a lick of paint but I can get some of that, along with the remote to local fan modification. Need to tesla it first.

Re: Another ILT arriving today

Yes, I've heard horror stories like that about ebay repackaging too.
And I've experienced it as well but it wasn't as bad as I thought.
Still, when it's equipment you don't want them messing with the packaging.

hehehe, yes the big race this afternoon.
It really does stop the nation.
You notice it a lot on the roads or in the shopping centres too.
Everything just stops for those few minutes.

Re: Another ILT arriving today

Yes - I wonder if the fedex guy will arrive at 2:55 pm and deliver then say "quick put the telly on - I want to watch the race!!" LOL. Even some of the buses up here have TV's in them and its not unusual for the driver to put the audio over the PA so if your stuck on a bus, you can still see the race. Crazy!

Screw it - the laser can wait. Fedex can redeliver it. I'm leaving here at 2 - laser or no laser. I want to watch the cup. :crackup:
I also need to open a new bank account (long story) so need to get that done.

edit: just went up and placed some last minute bets. Bloody pub was packed already. Glad I got them on RB. Good luck if you're having a punt. I have some many runners backed I should get something

edit 2: oh well at least I don't have to go to the pub again - picked all the flamin donkeys! didnt win a cent! LOL but all a bit of fun

Lets hope my luck with the laser is better than my luck on the ponies!

Well it looks like I had lady luck on my side with the laser - it appears to have arrived unscathed and not reboxed too badly by pitney bowes! Time will tell when I get the power supply to test it.

I will take proper photo's tomorrow when I pick up my iphone 8+ as the present samsung which I have borrowed is atrocious when it comes to pictures.
Last edited: Nov 7, 2017

Congratulations with a newcomer!

You're heading your way to becoming Pman of the ILT world.
Nice new unit.

Yes now I just need the 100 hour clock one from the uncle and I'll own three!

I'll need another 5405 PSU to run it, but first I have my eye on an auction for the funky 40 led bar remote controller

edit: just pulled the plenum off the unit and test fitted one of the omnichrome fans - fits perfectly, just need some longer screws.

Also spotted some 105CFM fans from Jaycar to use as side fans.

Its resting place when not being played with: 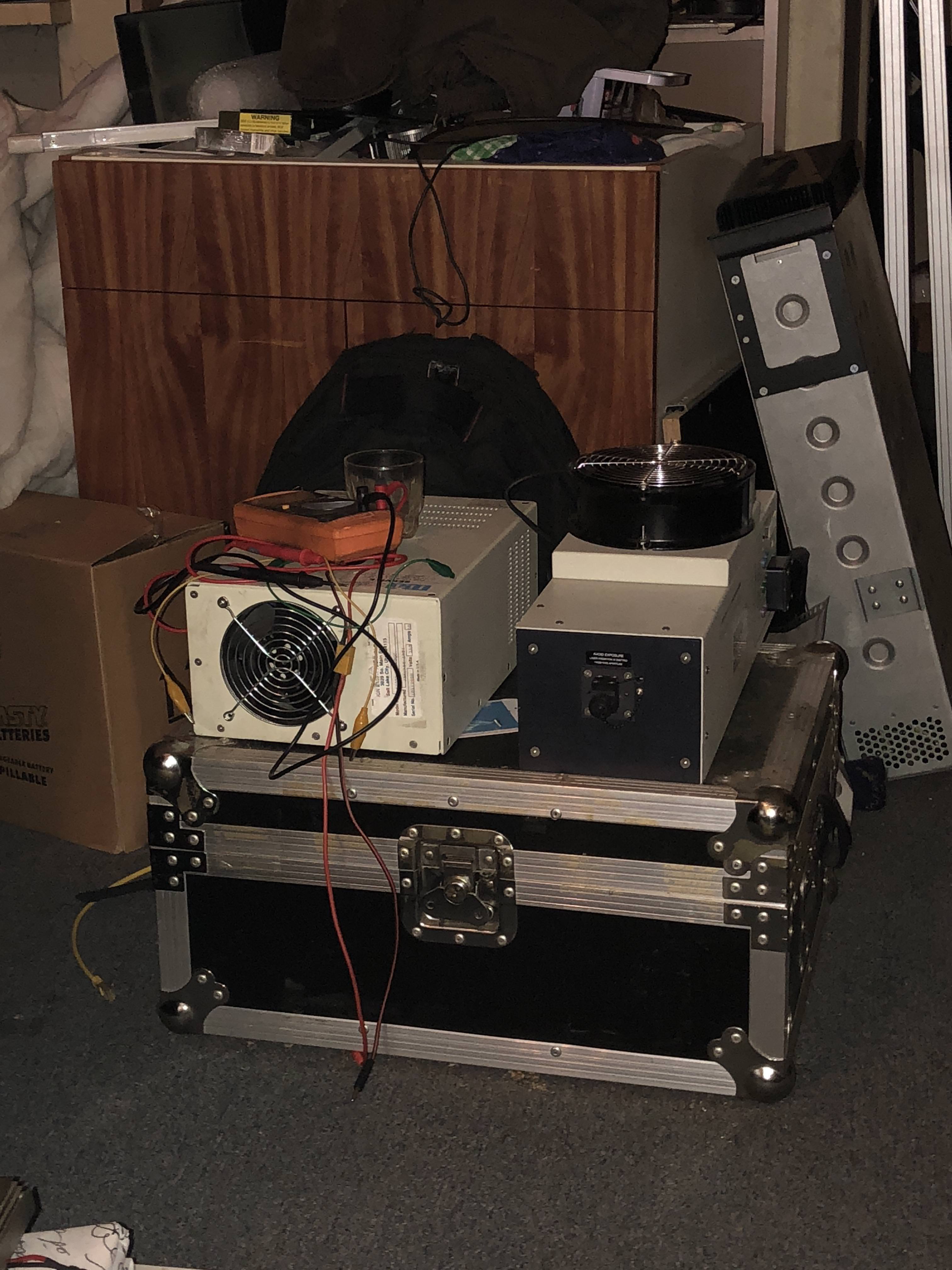 I'm one tap too high on the transformer. Not enough boost. I want BEAMZ! Notice the omnichrome start card makes an appearance! 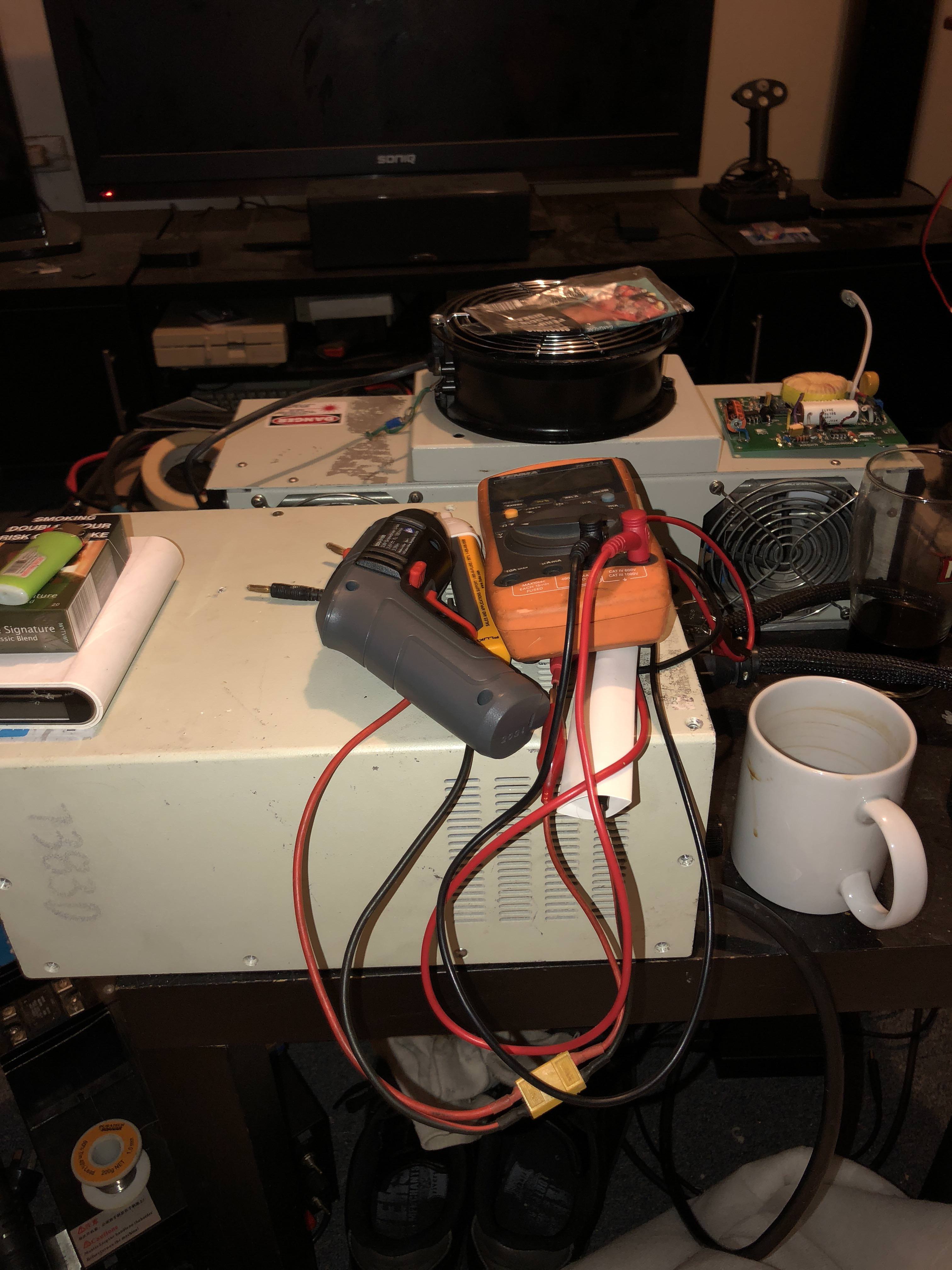 All the screws out to wire in some fans for cooling. 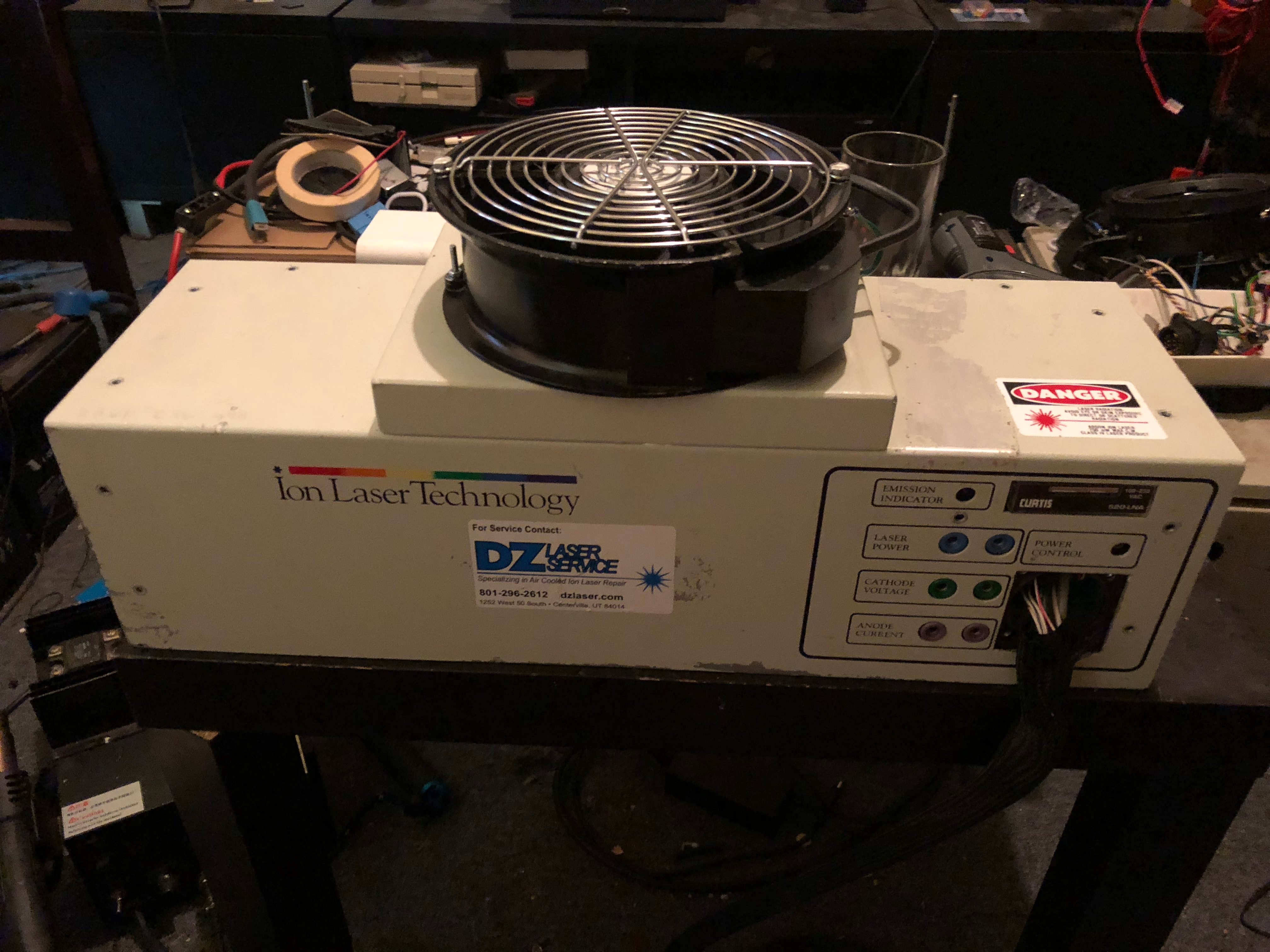 HR mirror end. This is normally covered (and remains so, I just wanted to check for a littrow prism). 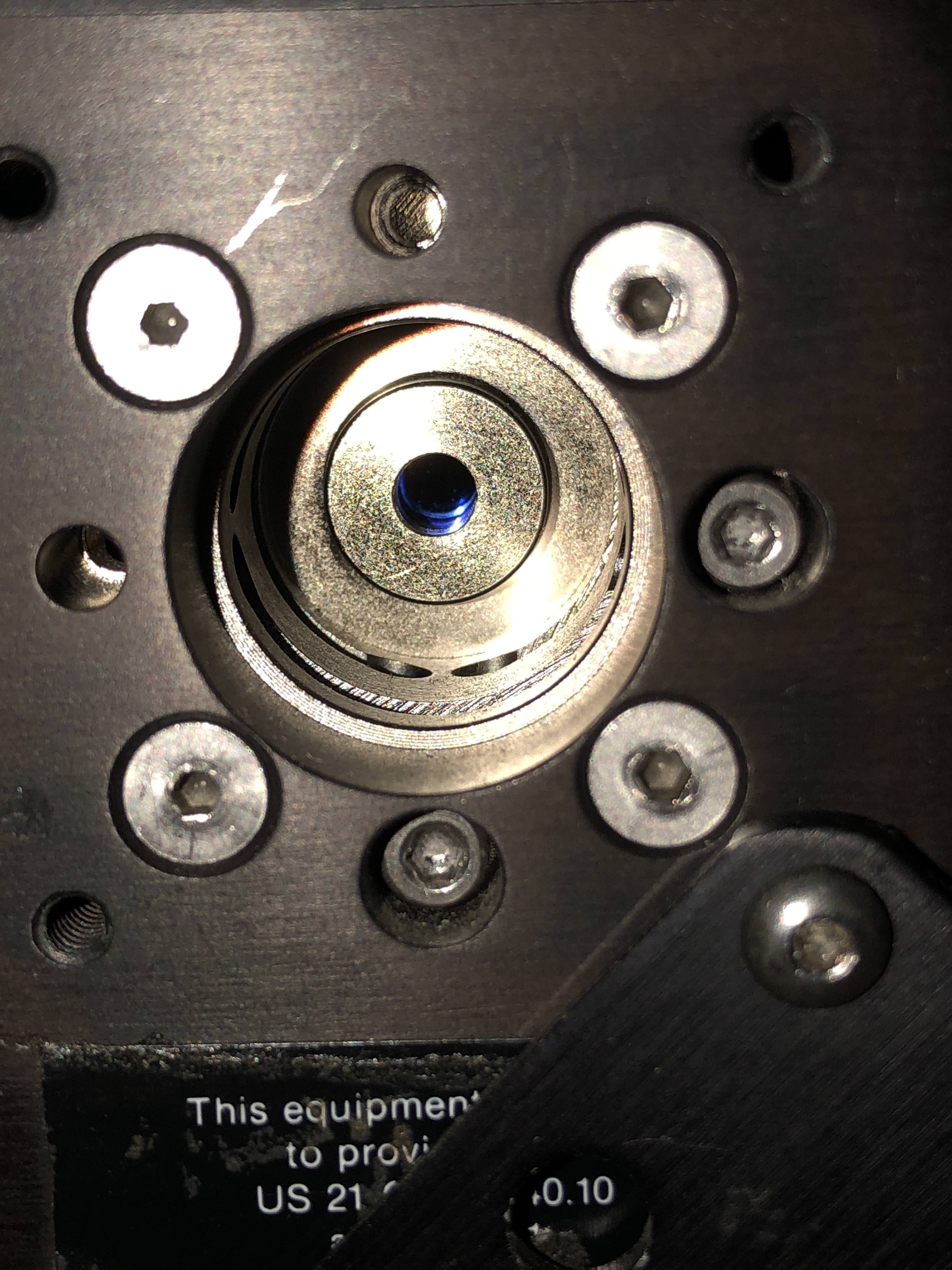 one naked tube - I gave it a cleaning and fished out a dead spider. Also checked for any obvious damage. 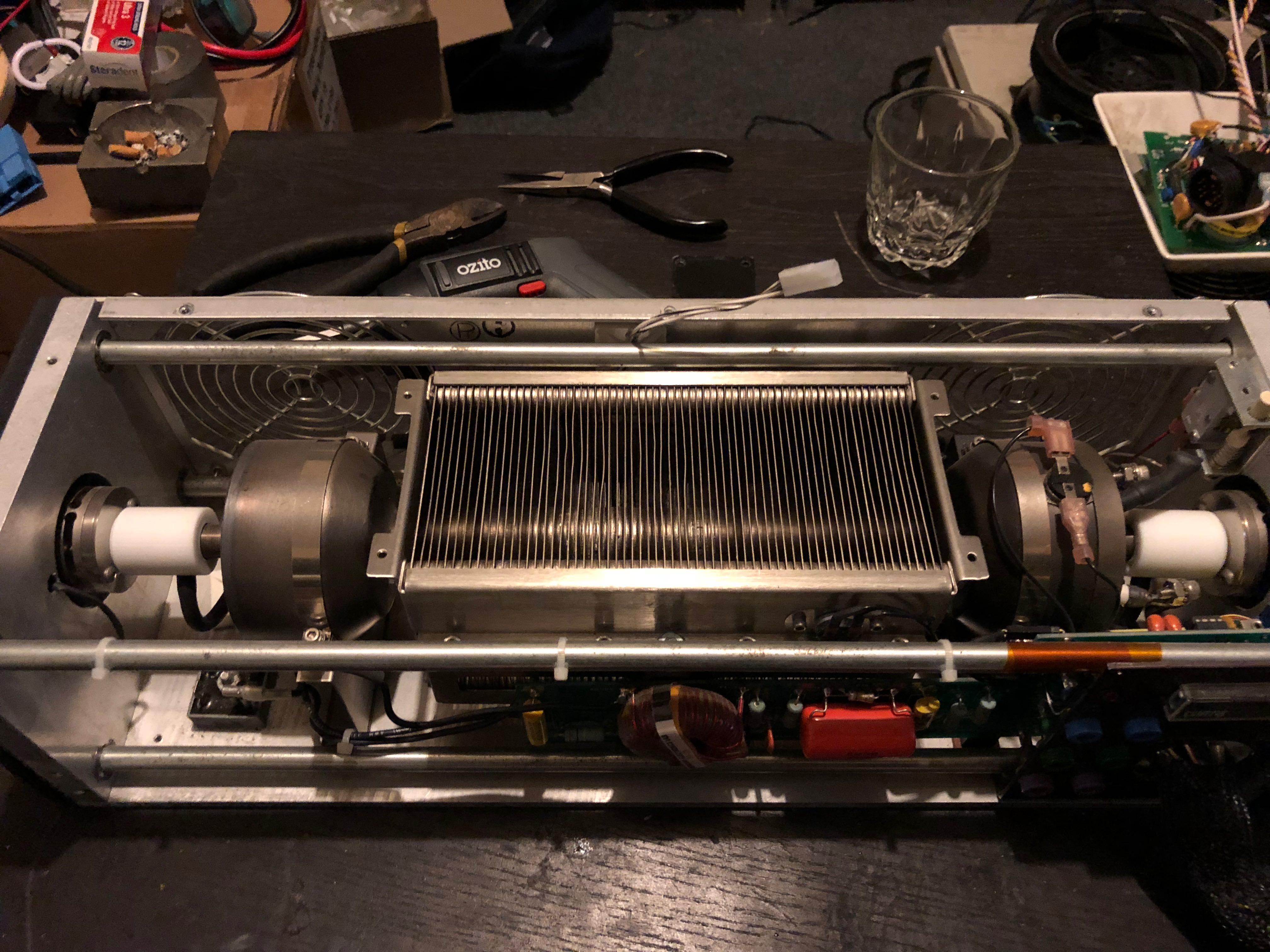 Cathode end of tube - this thing has a case interlock! The thermal switch on the endbell turns the fans on. 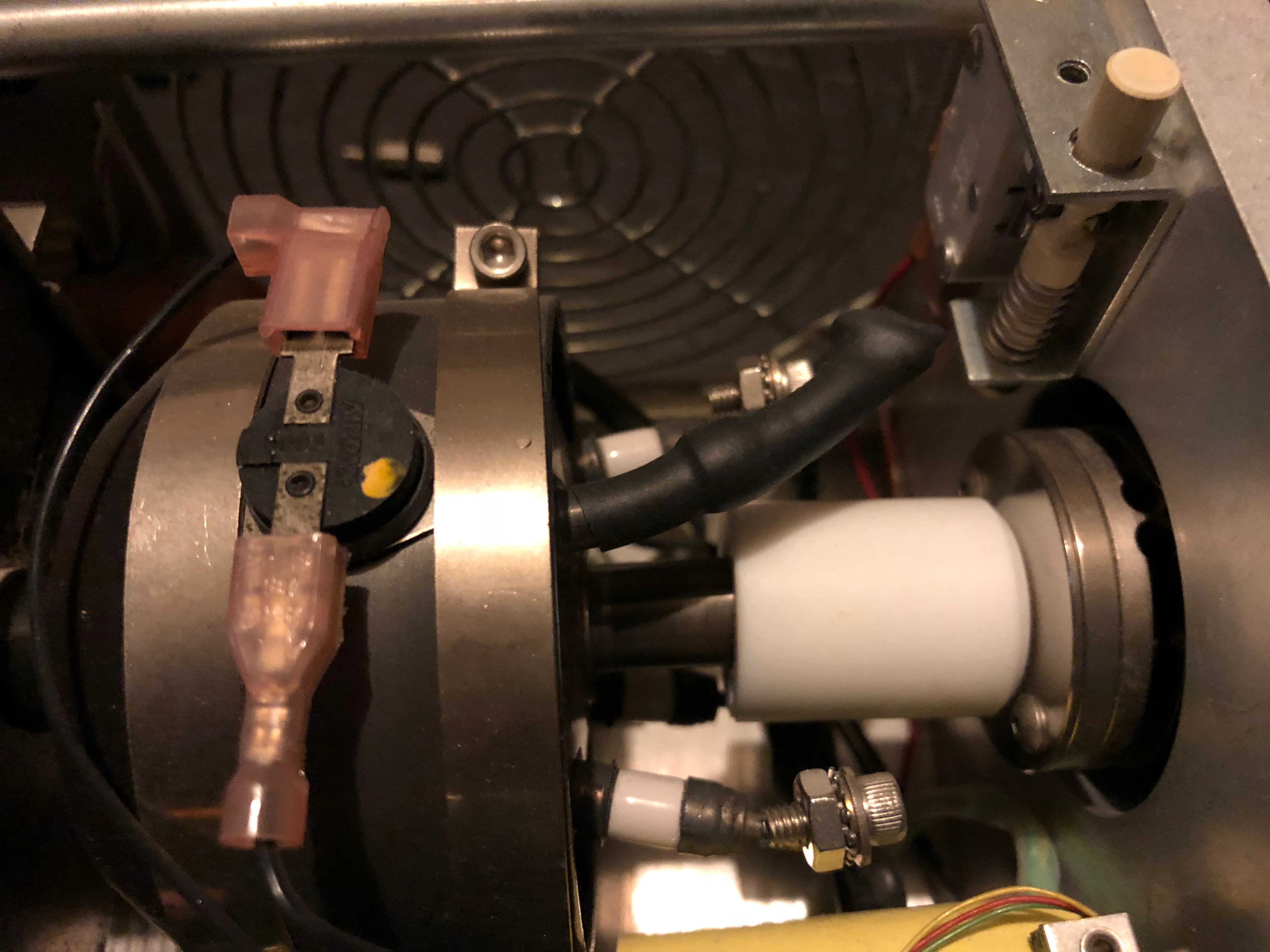 You could hardly call that a start card! 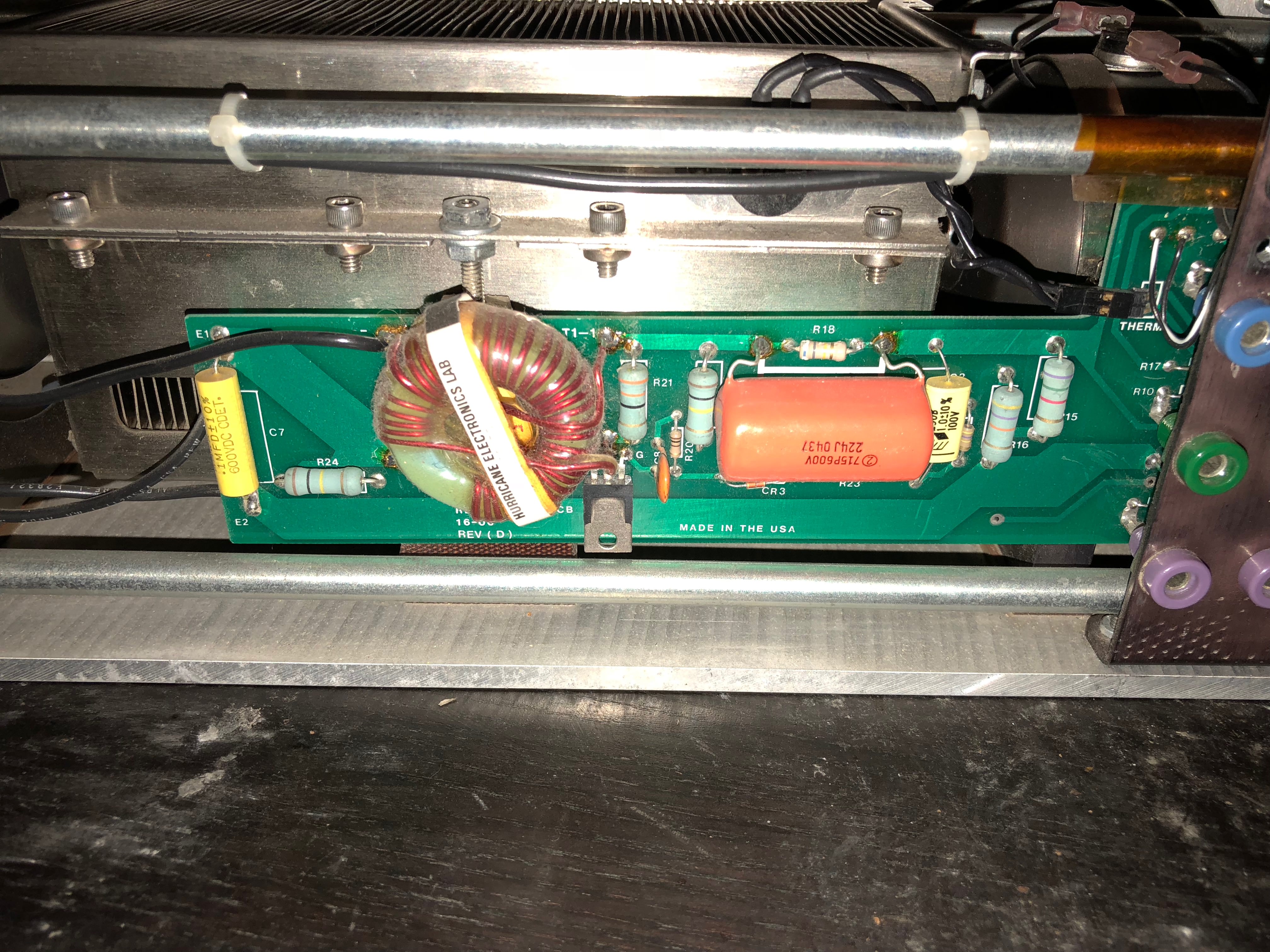 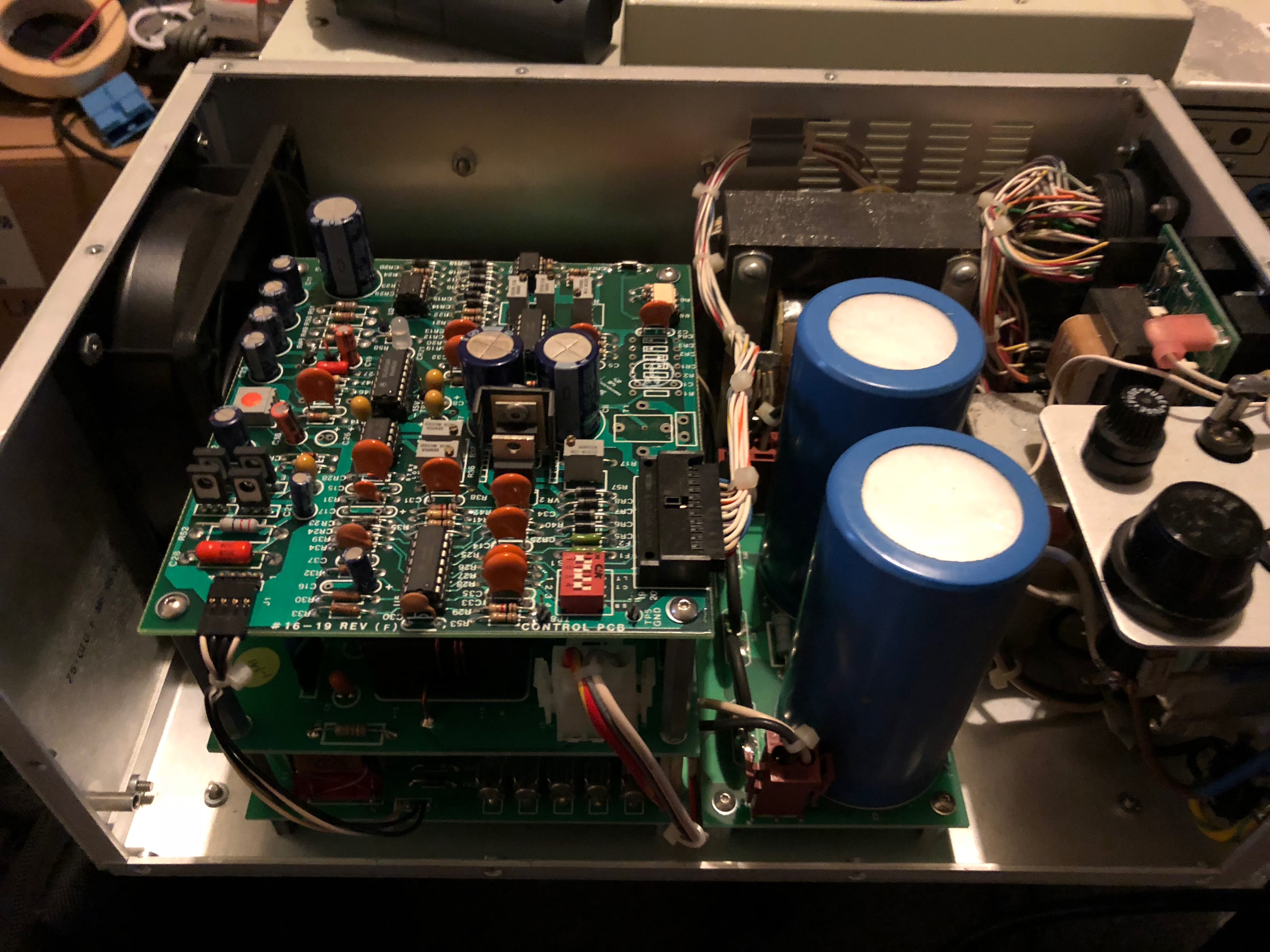 The "Brains" of the PSU. This is what makes everything run. 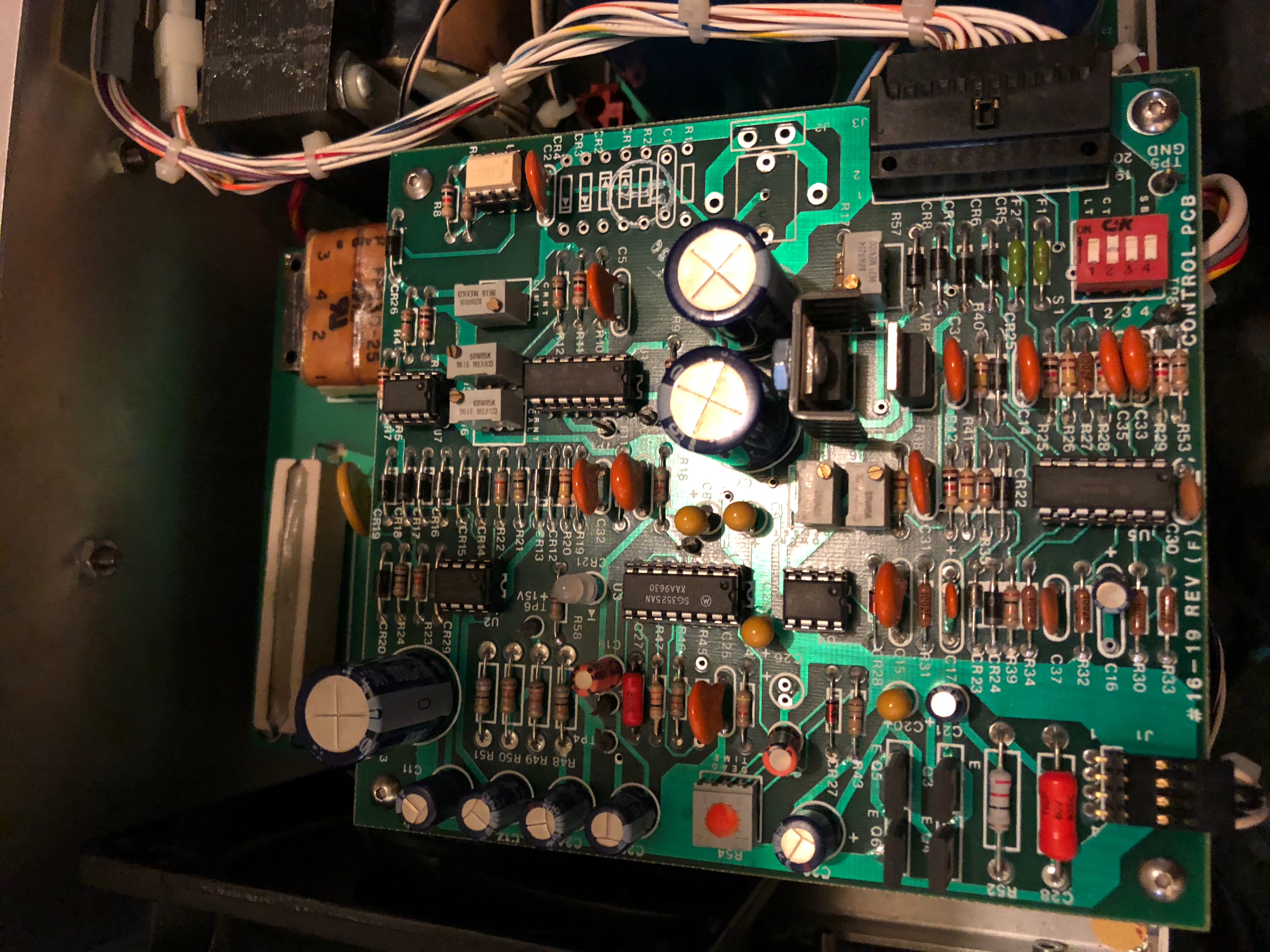 Heres the middle board, this contains the boost supply, hall sensor for current monitoring amongst other things. 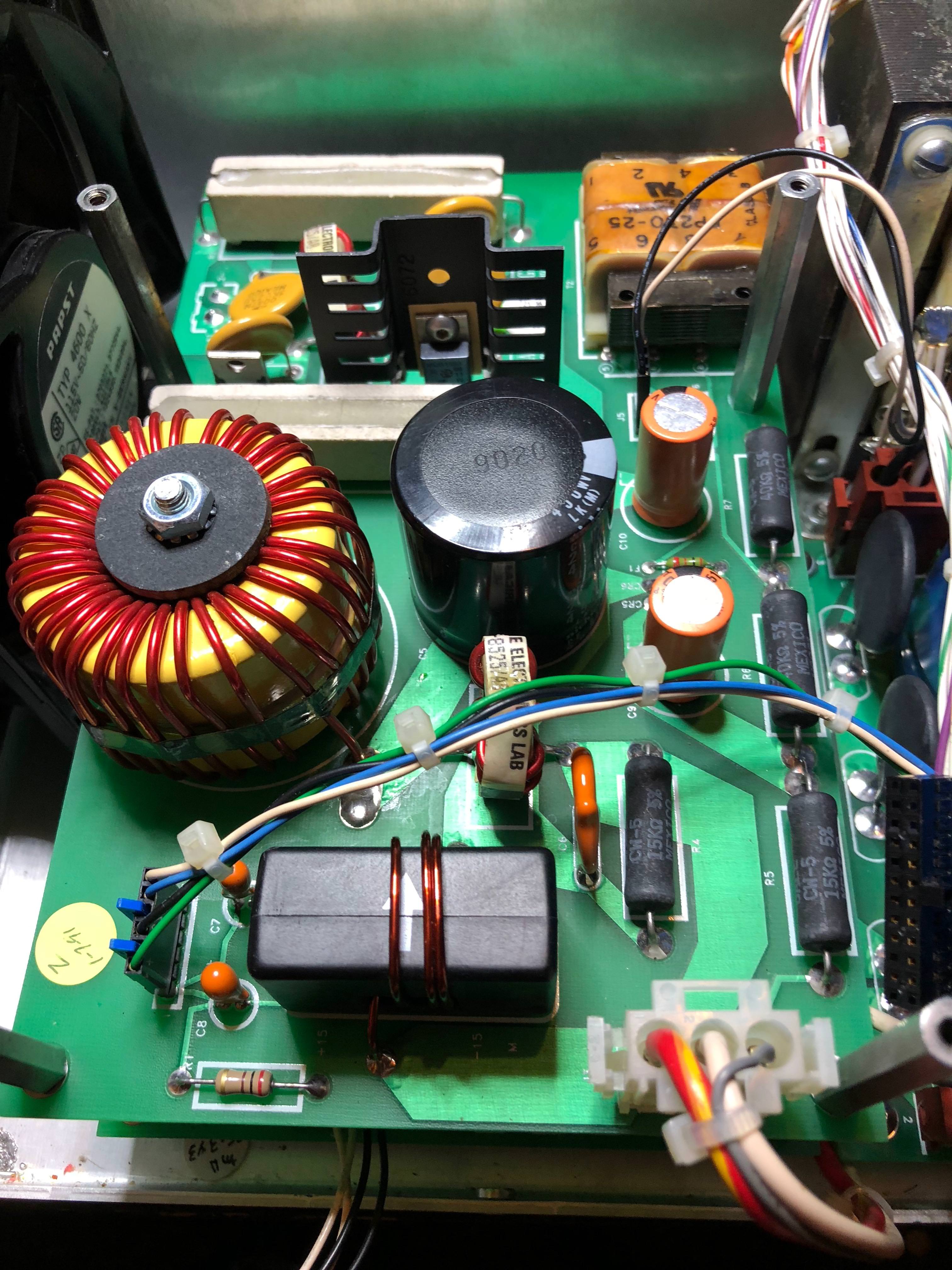 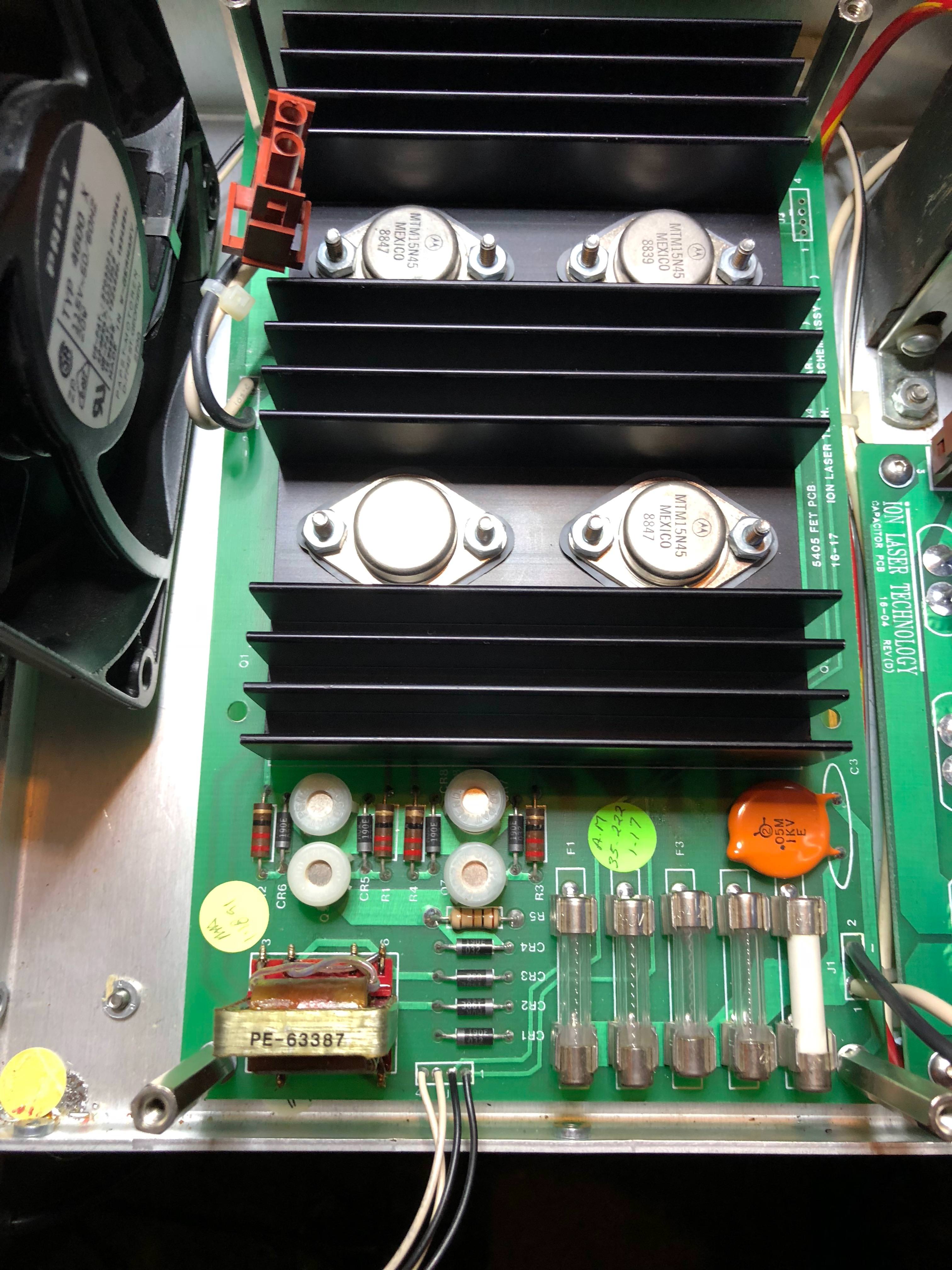 Edit: PSU is now converted - but looks like laser start board needs a little TLC. Probably a dud SCR. Will replace it later.
Last edited: Nov 29, 2017

Sorry for the double post. Today I mapped out the fan pins, so now I can wire in my fans when I get them (I already have the top fan). I just need to move the tap from 115V to 240 to run 240V fans. The hour meter also runs off this, but it has a universal rating. I also gave the insides a good brush with a paintbrush to remove all the dust. While cleaning I found a dead arachnid inside - and fished him out - must have called the laser his home at some stage

Bonus! I Scored the funky remote off ebay! so I'll be able to control the laser power and put it into run/standby and monitor the interlocks.

I also scored a 240V supply - this will help heaps as I'll be able to easily copy the wiring scheme inside to match on the 210 supply - thus turning it into a 240V one as well. I can't back convert to a 115V supply though, so I can't offer it to someone in the states as the 115V one has extra bits to boost the supply DC voltage to 380V before being regulated by the switcher. 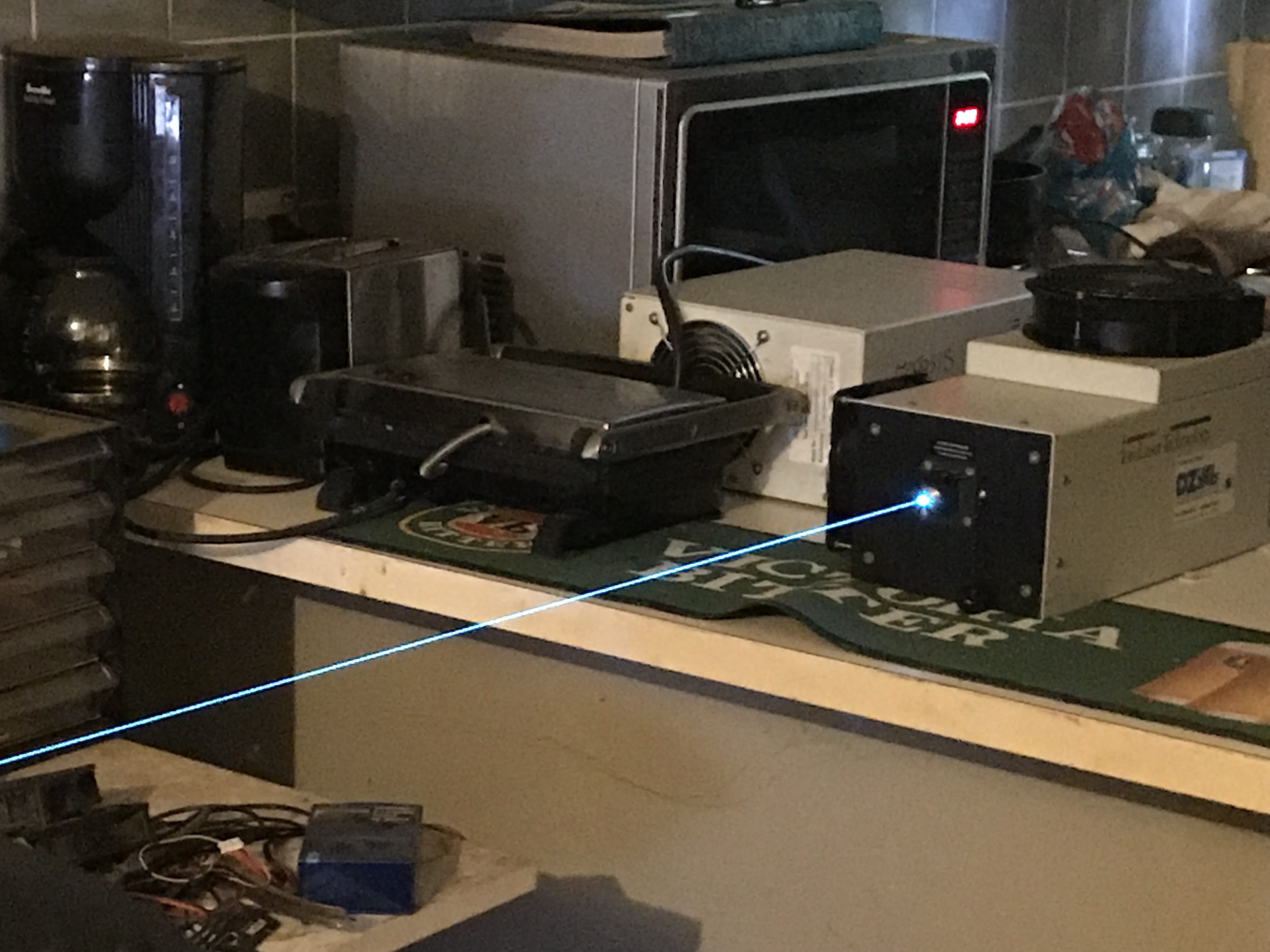 Thats at full noise - 10.9 A - around 150mW and climbing according to the jacks - no smoke or fog, thats just dust particulate in my dusty apartment LOL! I just gotta get the fans working properly - the box was way hot when I shut it down - I thought they were working but that was just the fan in the PSU! - oops! At least I beat the thermal interlock. So still has issues, but only minor. IT WORKS!!!!