I’m ordering a laser today. I’ve gone back and forth so much on these my head is spinning, but I’m pulling the trigger today.

There are two hosts I will own, without a doubt, in the near future, both from Sanwu:
•The Red (Cu) Guardian
•The Ranger

The thing is, I can’t decide which to get first, and what combination of wavelengths and wattages I should get for the two. I do know I want a Blue/Cyan and a Green laser.

I will almost certainly be purchasing the 1.6w 525nm Sanwu Ranger (although there is a combination I can think of where I wouldn’t). I can’t even imagine what it will look like in the sky, but I REALLY want to see it. There is something extremely attractive about the idea of having the world’s brightest pocketable laser (that I’m aware, please correct me if I’m wrong though) at your fingertips.

Here are the combinations/configurations I can’t decide between of the two lasers I will be purchasing (one will be purchased today, and the other in the near future, i.e., < 3 months):

So, as you can see, the last combination would be the only combo where I don’t end up getting the 1.6w 525nm. The first combination is the only one where one of the two lasers I’d be getting (specifically the first, which is significant) would be substantially less powerful. Getting that Red Guardian at some point is very important to me because I think it would be really cool to EDC with the “Copper Olight Warrior Mini” I just ordered (pictures below): 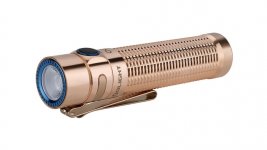 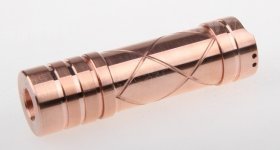 So I want to know just how powerful the >1w lasers I listed are. What does that number mean for me? Can I look at the dot on non-reflective surfaces safely? Are they safe to use inside? Etc etc. I just need some context. I really like the idea of the continuously adjustable power on the Ranger for the powerful wattages. If I get one of the more powerful diodes in the Red Guardian host, I think I would get the multi-mode version so that I could turn it down if I wanted. If I get the 150mw 192nm in the Red Guardian I’ll just get the single mode, since I’d prefer the simplicity of it.

I want to know what y’all think I should get. I have a feeling the recommendation will probably be to start with the 150mw laser til I get a feel for them, but it seems like a waste to get that low of wattage in a beautiful host that can handle a lot more. With that said, the plus side would be that I could run that 192nm continuously until the battery ran out if I wanted, and not have to worry about duty cycles, since that host was made with much more powerful lasers in mind. Still, I

Let me know what y’all think. I’m all ears. No matter what, I’m buying a laser TODAY.

Thanks in advance for the help/insight. I know I’ve been going on about this purchase for the past few days, but they’re not cheap, and I want to get it right.

1w lasers are VERY dangerous, just looking at a 1w laser on a wall can give you eye damage. even getting a reflection in your eye for a fraction of a second can give you bad eye damage. i suggest that you get a lower powered laser i would say less than 100mw but its your choice tbh. if you really want an interesting laser, look for a lower-powered, uncommon wavelength laser pointer. if you have quite alot of money to spend, you can try to buy a cni glp 473nm or 589nm laser ($300 and $500 respectfully on average). if you want to look for something more affordable, i suggest you make your own laser pointer with some yellow/yellow green modules from lasence they have 575nm yellow lasers ($65 for multimode 8mw, $80 for TEM00 8mw and $200 for 20mw), 561nm yellowish green lasers ($25 for 6mw, $85 for 20mw) and 545nm lime lasers ($15 for 8mw and $50 for 40mw) note : those are modules not pointers so you will have to build the rest yourself, the modules do come with a driver board though also those are dpss modules and they cant be used in to cold/hot environments.

Thank you for the insight, @Sowee7 ! It does in fact help, and I appreciate it.

Ok guys. So I couldn’t decide what to do. My solution is to blitz and buy both lasers at once.
I took a screenshot of my shopping cart but the file size is too big to upload, and I can’t figure out how to shrink the files (easily/quickly)

So, that’s a fat chunk of grip, at least for me. But I’m ready to do this. I’m extremely excited. But before I pull the trigger, I needed to ask just a few questions:

I didn’t get batteries because I’ve heard that can increase the chances of your lasers being confiscated. I could not stomach it if that parcel was confiscated and I was out all that money. Is this still true, about not ordering batteries with your lasers? If so, do y’all have any recommendations on specific batteries or websites?

Do those laser safety goggles look correct? As in, will these keep me safe from the lasers I’m purchasing?

Does Sanwu ever offer any coupons/promo-codes/discounts? I signed up for the newsletter in hopes I would get like a 5% off coupon or something, but no luck. This is a really expensive order and anything would make a big difference to me. @Podo ?

Do y’all see anything I’m doing wrong, or that you would do differently? And recommendations in general?

Any input is exceedingly and wholeheartedly appreciated. I want to make sure my ducks are in a row here.

I finally said “screw it” and placed the order! Got the Sanwu 1.6w 525nm Ranger in host style #8, and the Red Guardian 150mw 492nm. I also the X3 Beam Expander and one green tritium vial for my Ranger. Oh yeah, and I also got some PPE to make sure I’m safe while operating that Ranger: 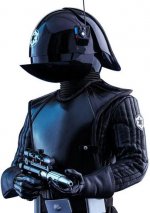 Can’t wait to get ‘em in the mail and fire them bad boys up. I’ll be sure to (attempt to) write a good review on them. Just know it’s going to be more qualitative than quantitative.

Thanks for the help.
Ryan

Edit: fixed the erroneously listed Red Guardian wavelength. I had written it as 592nm instead of the 492nm it actually is. Thanks for the catch, @farbe2

PineyTinecones said:
I finally said “screw it” and placed the order! Got the Sanwu 1.6w 525nm Ranger in host style #8, and the Red Guardian 150mw 592nm. I also the X3 Beam Expander and one green tritium vial for my Ranger. Oh yeah, and I also got some PPE to make sure I’m safe while operating that Ranger:
View attachment 72920

Can’t wait to get ‘em in the mail and fire them bad boys up. I’ll be sure to (attempt to) write a good review on them. Just know it’s going to be more qualitative than quantitative.

150mW at 592nm would be nice, nice deep Yellow!
However i doubt that you ordered that!

farbe2 said:
150mW at 592nm would be nice, nice deep Yellow!
However i doubt that you ordered that!
Click to expand...

Fixed! Thanks for the catch.

Guys, I am in major need of assistance with ordering some batteries for these two lasers I just purchased! Please help!

There’s a lot more to these batteries than I first realized.

Im pretty sure I need the 35mm unprotected 18350 for the Guardian. But what about discharge rating and capacity? I noticed that the more you go up in discharge rating, the lower the mAh capacity is.

I’m shopping on 18650batterystore.com right now because I saw it listed on @ArcticDude ’s Guide. In my cart currently I have 4x Epoch 9A 1100mAh 18350’s. Is this a high enough discharge rating? The only other 18350 they carry is the Vapcell’s, and apparently those have gone downhill. At least in their 18350 offerings.

Will these work for the Ranger as well? I cannot find anything that states how long of 18350’s I need for the Ranger (again, the Epoch’s in my cart are 35mm). Honestly I don’t even know if they make protected 18350’s like they do the 18650’s. That may be a stupid question.

and on to the 18650’s-
In my cart currently I have 2x Molicel 35A 2600mAh 18650’s as well as 2x Epoch 15A 3000mAh 18650’s. Both kinds are the 65mm unprotected ones, and not the 70mm protected ones, but I don’t know if I’m supposed to be using the longer ones instead. Does the Ranger use the 65mm unprotected 18650’s? Also, what kind of discharge rate do I need for that thing? 35A is waaay higher than most everything else I was seeing, and so of course the mAh reflects that. Would I be better off with the 15A ones that have higher capacity? Also, is it true you can use 2x 18350’s instead of 1x 18650? What would be the benefit of that? Also, is Epoch a good brand? I didn’t see it mentioned in the guide, but it seems pretty highly rated/reviewed.

Also, I was going to purchase the Opus BT-C3100 V2.2 4-Bay Digital Battery Charger to charge my batteries. Is this a good charger? Will it serve me well?

Thank y’all so much in advance. I’m trying to do my own homework on this stuff but good golly there’s a lot of info to dig through. It’s dizzying!

PineyTinecones said:
Fixed! Thanks for the catch.
Click to expand...

Now THAT would be a unique wavelength ;-)
L