Here is another experiment: knife edging of two beams from these 2x NUBM36.

To my understanding it was an easy way to KE 2 beam packs. Not super sharp like it could be done with special prisms Thor is selling but OK for me.
And I had to turn one of the chips to make them both vertical because horizontally the beam did not pass well between mirrors in such a compact installation. Now by adjusting kinematic mounts both beams can be parallel or combined into one spot on the wall like on this picture.

To Junkers and FAP:

After my inquiries the seller added this Optically Contacted PBS to his shop: 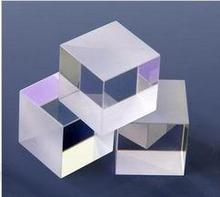 I do not understand why the damage threshold is given for 1064nm. But I am going to buy one cube and check it out.

And why Thor does not sell these High Power cubes for 450nm? Seems that it only has DPSS and gas lasers wavelengths in the list:

I think Thorlabs will cater to requests but their prices are already high enough..
L

I would like to write to Thorlabs but the email given for requests on their site seems to be "not existing" even after I enter into my account.
If you are in Germany, could you try to write or call them and ask why do not they sell OC PBS for 450nm?
L

I was not writing here for a long time because in the summer it was better not to sit home. Not done may things but at least there is one test what I can add to this old thread now.

After several months of waiting I finally received the 1 inch big Optically Contacted PBS for 450nm from this ali shop and could start playing with it.
This time from precaution not to burn it as it happened to the ordinary PBS cube I played with earlier, I started by installing it at 20 cm distance from emitters. Then gave 1-2-3 A currents for 30 sec. Then put it closer and closer (10-5-2.5 cm) and repeated same thing each time looking at the cube to see burn marks to appear...

And to my satisfaction it has stood well. Optically Contacted really means that it can withstand 2x 100W beam packs for 30 sec at least. The cube just got 5 degrees warm each time I passed 200 total W through it and is working really well.

However, these 200W focused at 200mm were still not enough to burn through a 2mm thick piece of stainles steel. Could make a hole through a 1mm thick one but 2mm looks too thick for it.

One bad thing - the price was 330usd in May when I first wrote to the shop about making it for me and now when I asked to send me a 2nd one, the guy says that MF costs rose this year in China and it would cost 360eur now. I ordered the 2nd one anyway, a decent PBS at same price as NUBM36 whose beams it is supposed to combine looks logical to me.
Cheap PBS for cheap lasers, costly ones for high end lasers...

Thank you for your hard work and sharing the results my friend. I may copy you, but try to put 4 arrays together.
L

This week I have received the 2nd 1" Optically Contacted PBS for 450nm. Tested it and it works as fine as the 1st one.

This Lighten Optics from Beijing seems to be a really trustful seller! And it has things which Thorlabs does not even have!

Now I can start thinking of combining 4 arrays, with 2 PBS and then Knife-Edging this could work... but the HS has to be really large...

You could get it only slghtly tighter by KE.

The side by side spacing is ok, but the far field vertical alignment/convergence could be better, when I knife edge with multi modes I align the far field bars as much on top of each other for effect as I can get them, also the beams fast axis divergence is so aggressive but that's another issue......still they are not bad for what they are and for up close work they do pretty well, for rough cutting, but in the far field these are limited by the aforementioned factors.

My 35 array came with one weak/blown chip as you can see.