Here I'm again, with another crazy project
Finally I ended a project that I started at the beginning of this year.
As usually, I have spent a lot of moneys. This time, not for killed diodes, but to adapt a beam expander to the Zaser
head. The lenses was also a big problem: the power was so terrificant and concentrated in a very small line that have
melted the coating of one of the beam expander lenses.
But now, let's start from the beginning!
This is a Zaser black anodized custom version. It has a slighty bigger head (in diameter) and has one more fin: 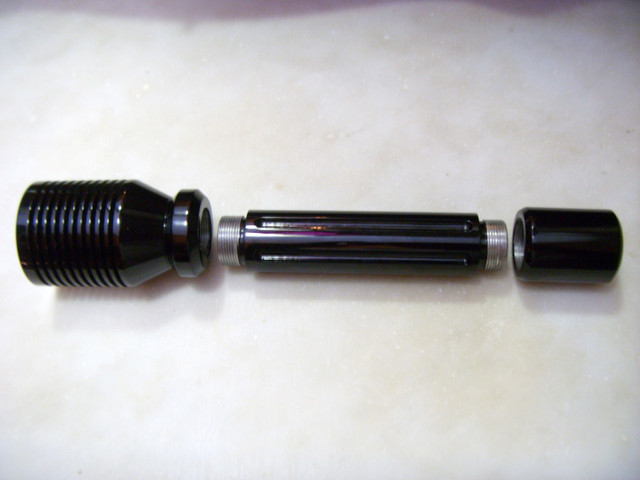 This is the head of the Zaser.
With the help of an handmade reamer, I have carefully removed the unneeded black anodized part inside the diode
hole, to assure a better heat transfer between ther copper heatsink and the aluminum head: 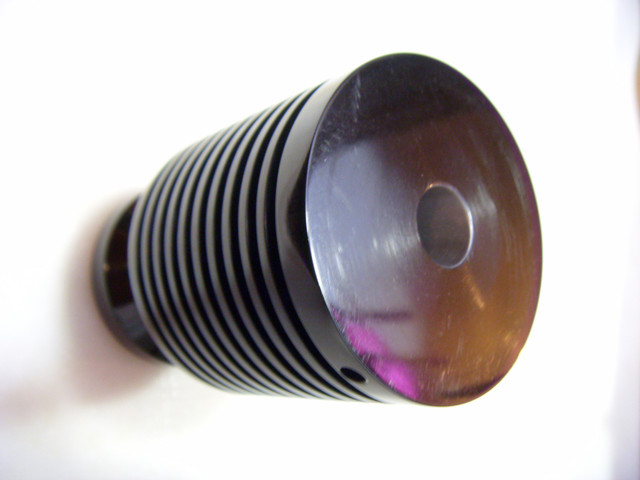 This is the special custom pill. Mrcrouse has made for me a rock solid and well built special pill for my Zaser, because
I needed a solid surface to put the driver, with good heat dissipation: 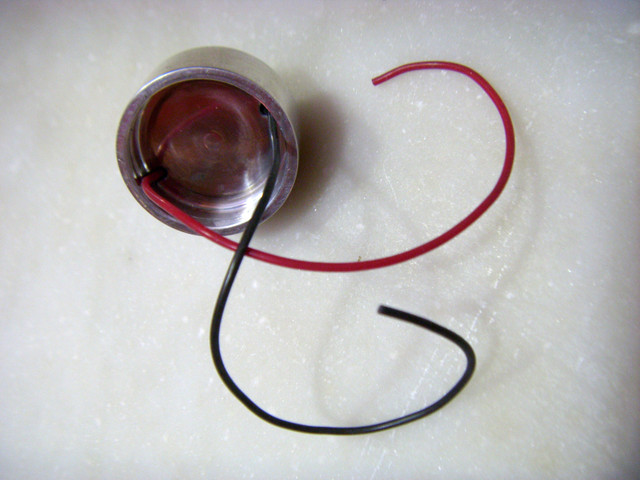 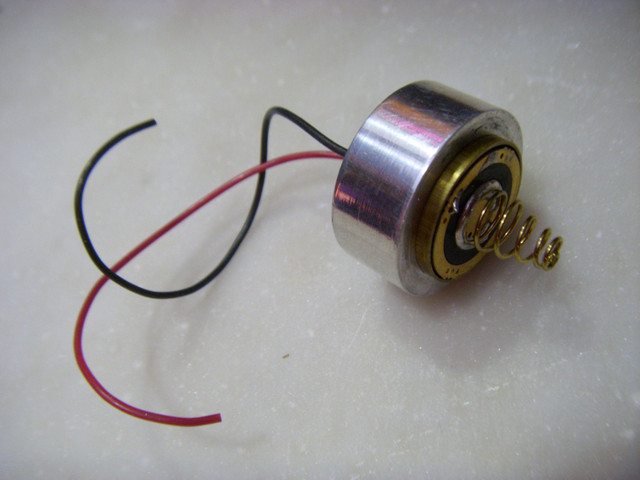 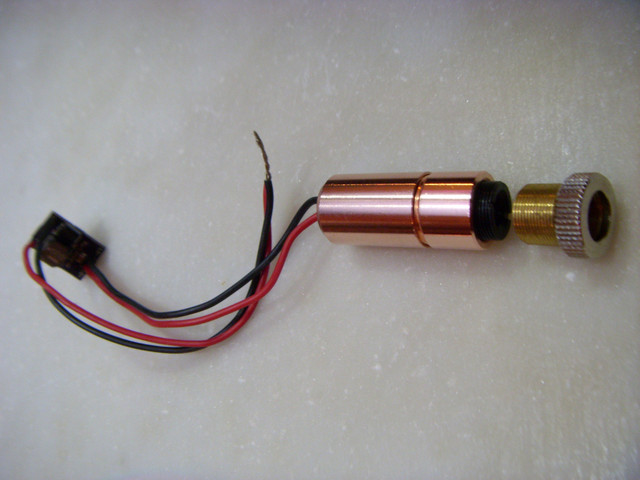 The driver placed inside the custom pill and glued with alumina thermal compound: 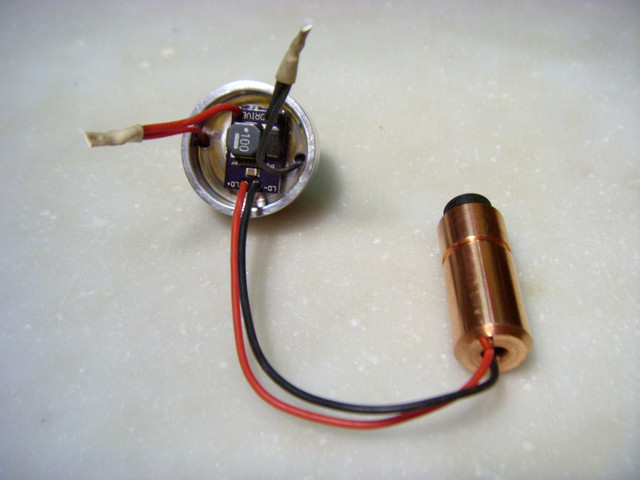 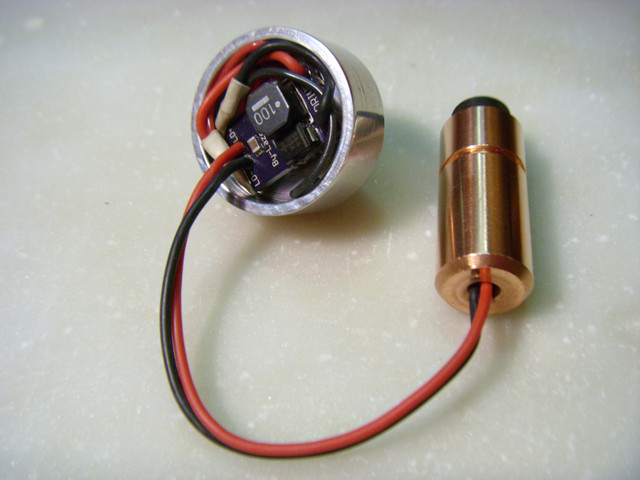 Diode and pill+driver in the right place (the pill is locked in the head thru a thin threaded ring which pushes the pill
against the inner end of the head): 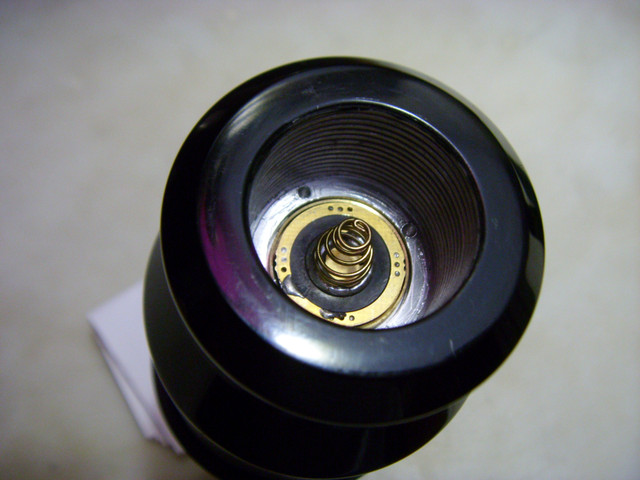 The other spring in the tail cap part: 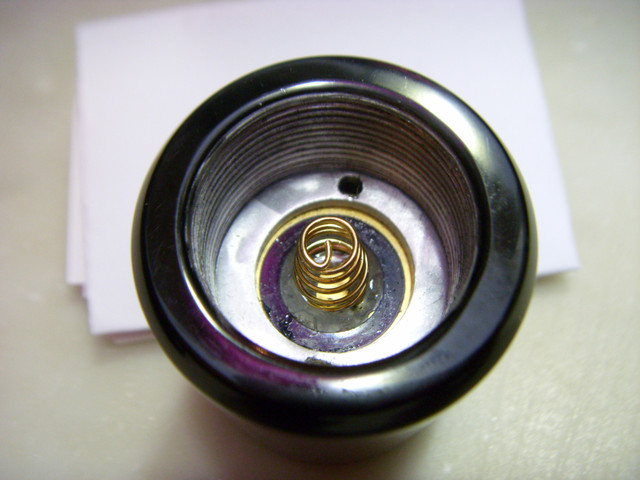 A piece of acetate foil to eliminate any battery rattle inside the host: 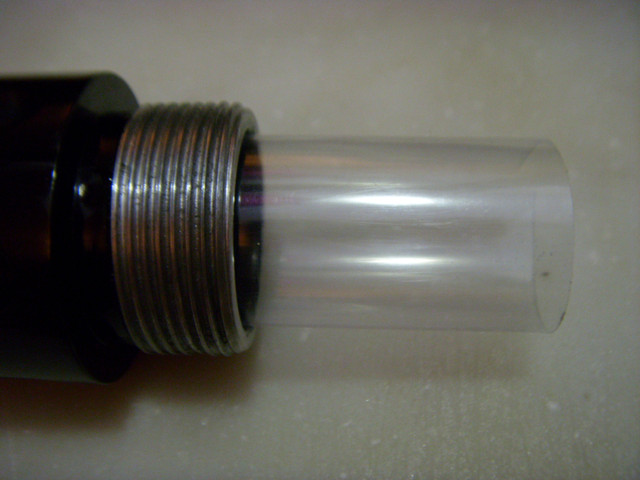 All the pieces ready to be assembled.
All the three lenses of the Laserglow Hercules Beam Expander was unmounted, decoated and recoated with a new
custom filter frequency range (from 440 to 460 nm), and reassembled: 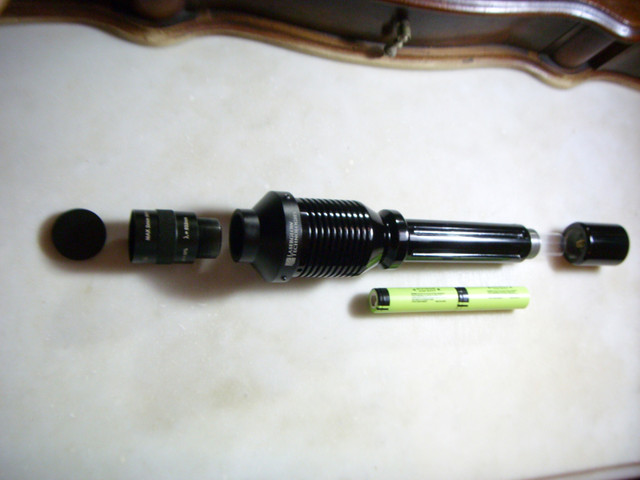 The creature assembled and mounted in a small high-quality Manfrotto tripod+clamp: 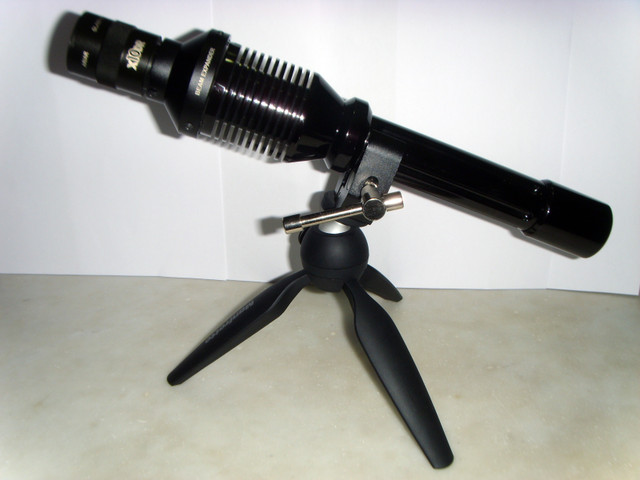 The performance graph without the beam expander: 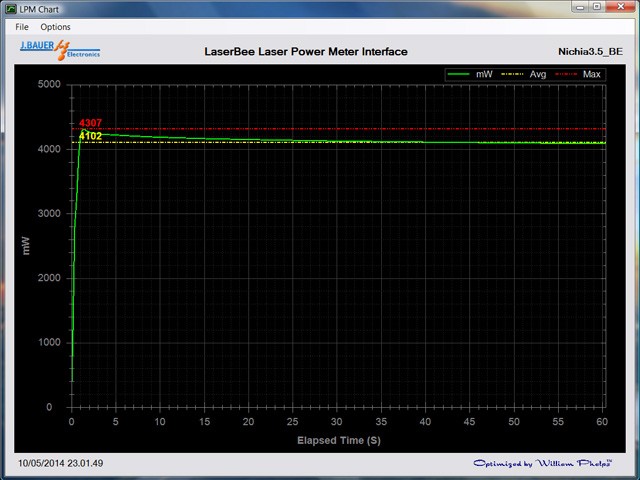 Shots in the night sky (10 sec exposure, sorry for the fuzzy photos and the different beam color, but only the
laser had the tripod, not the camera): 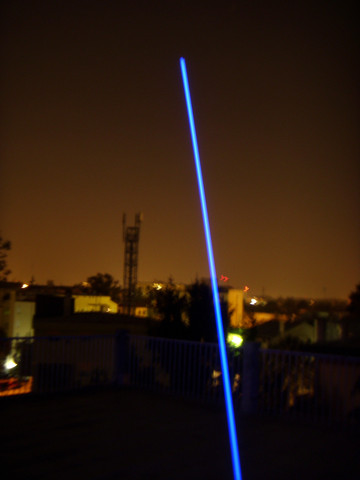 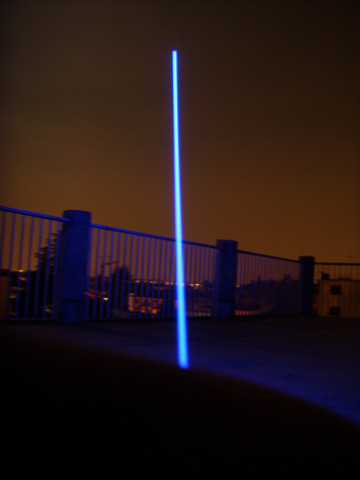 And now, the demonstration of the terrific injuries of a 4.3W diode output power collimated to a very tiny point.
I used a 80 grams sheet with a light green color:

this is not an handheld, this is a scary weapon!
Even shot against the white plaster ceiling of my room the laser leaves a nasty black mark.
From my room window to the garden entrance there are about 70 meters.
If I point the laser against a dry leaf resting on the asphalt near the entrance, the leaf starts
to smoke and then transforms into embers!
Anyway I'm very satisfied of the final result!
To realize this project, I sacrificed some items, such as one lens and another beam expander.
As a sort of bonus, I want to bring knowledge to another variant of this build.
Initially it was my intention to use a special beam expander built from two different expanders: a piece from
Laserglow Hercules Beam Expander and the main body from the Jetlaser Beam Expander.
Those were the nice results: 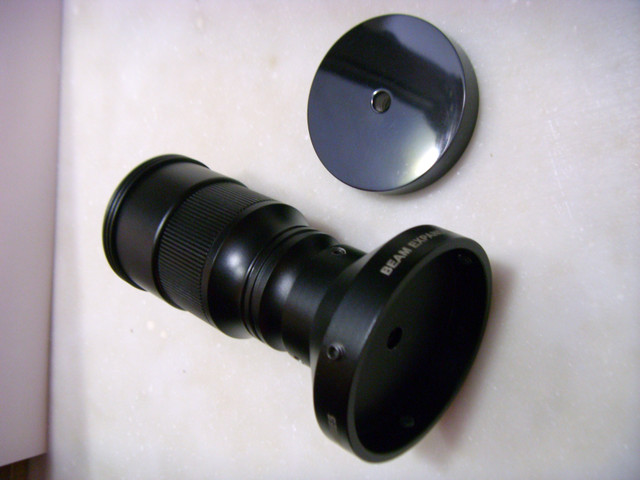 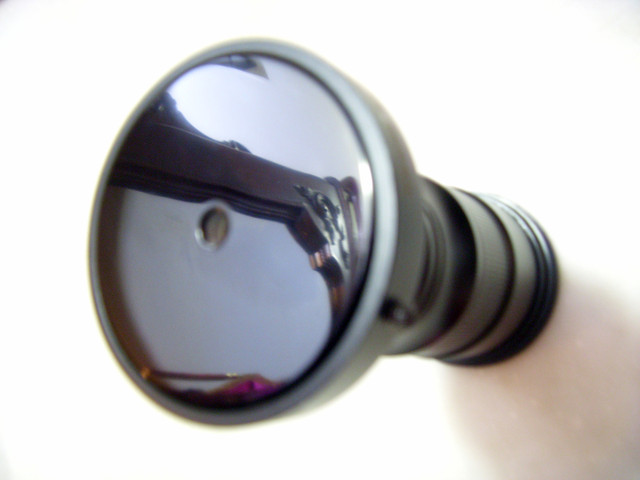 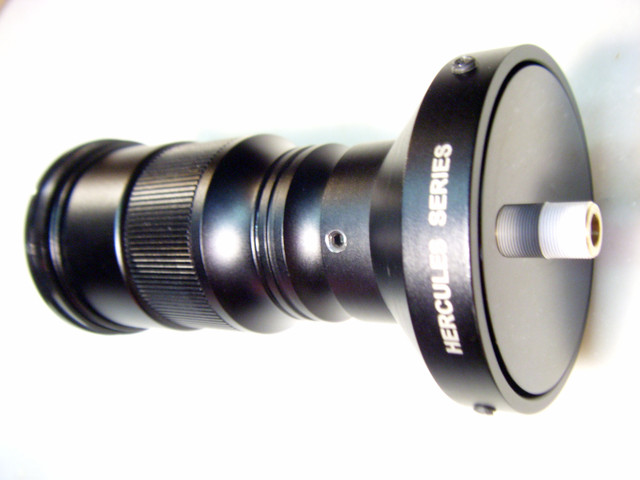 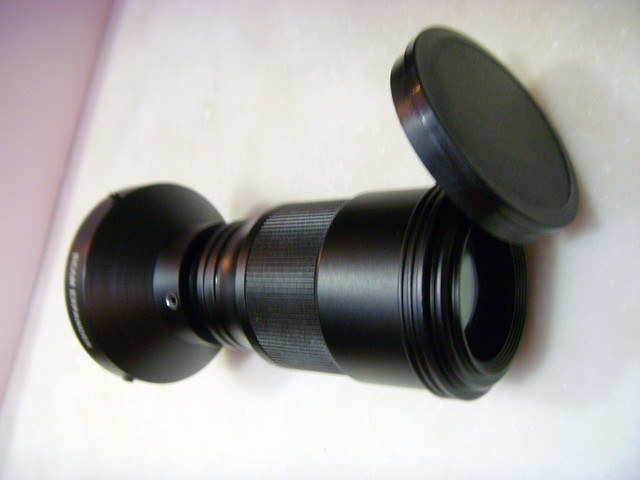 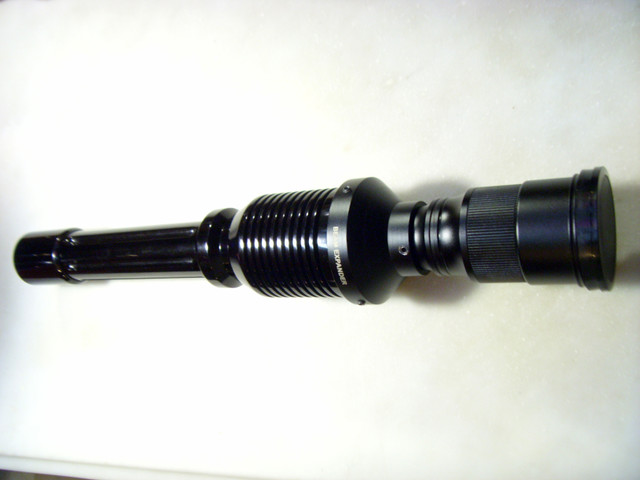 Unluckly, the Jetlaser beam expander had a very long focus, so I was unable to focus a collimated beam
even at 10 meters away from the aperture.
Thus, the handheld appears to be very unbalanced toward the beam expander.
It was a pity, because this beam expander is built very well, it is cheap, and the lenses
accept also the 445 nm frequency without the need of recoating.
However, with the last solution, I obtained a well balanced handheld with a big range focus.
And since I have two fine regulations (the 405 G-2 lens barrel original focus regulation and the Laserglow
beam expander regulation), I can vary either the input and the output beam, so I have the choice to have
a precise millimetric range from short to middle, or from middle to infinity

And now, as usually, I wish to thanks a lot:

- Mr. Jordan of DTR shop for his quality evergreen diodes, drivers and lenses;
- Mrcrouse for his professional craftmanship and the ability to solve every issue and to satisfy every strange requests;
- Laserglow for its moddables beam expanders;
- Marco Bottaro from Outlet Glasses Company (Italy) for the professional decoating and recoating procedure;
- The walls of my room ... :crackup::crackup::crackup:

Other crazy projects are coming in my dirty mind, stay tuned 'till the end of this year. :beer:

Kisses to everyone!
Richard.

Awesome work. One correction though it is a 3.5A driver not a 2.4A driver. Anyway great build. Thanks for posting.:beer:

Correction done, thanks for the help :beer:

I've been thinking of doing something with the same diode. Were there any other hosts you considered using before picking? Also, by ramping up the current, do you think you could've reached 5.5W?

Beautiful piece of equipment you have there! Be careful with it though, I set my curtains on fire years ago with a 1200mW blue!

Love the correction optics at the end! Good job.

I've been thinking of doing something with the same diode. Were there any other hosts you considered using before picking? Also, by ramping up the current, do you think you could've reached 5.5W?
Click to expand...

I think that Ricktrent could have some nice builds for You

Some new spectacular shots by night in hi-res with tripods and better exposure: 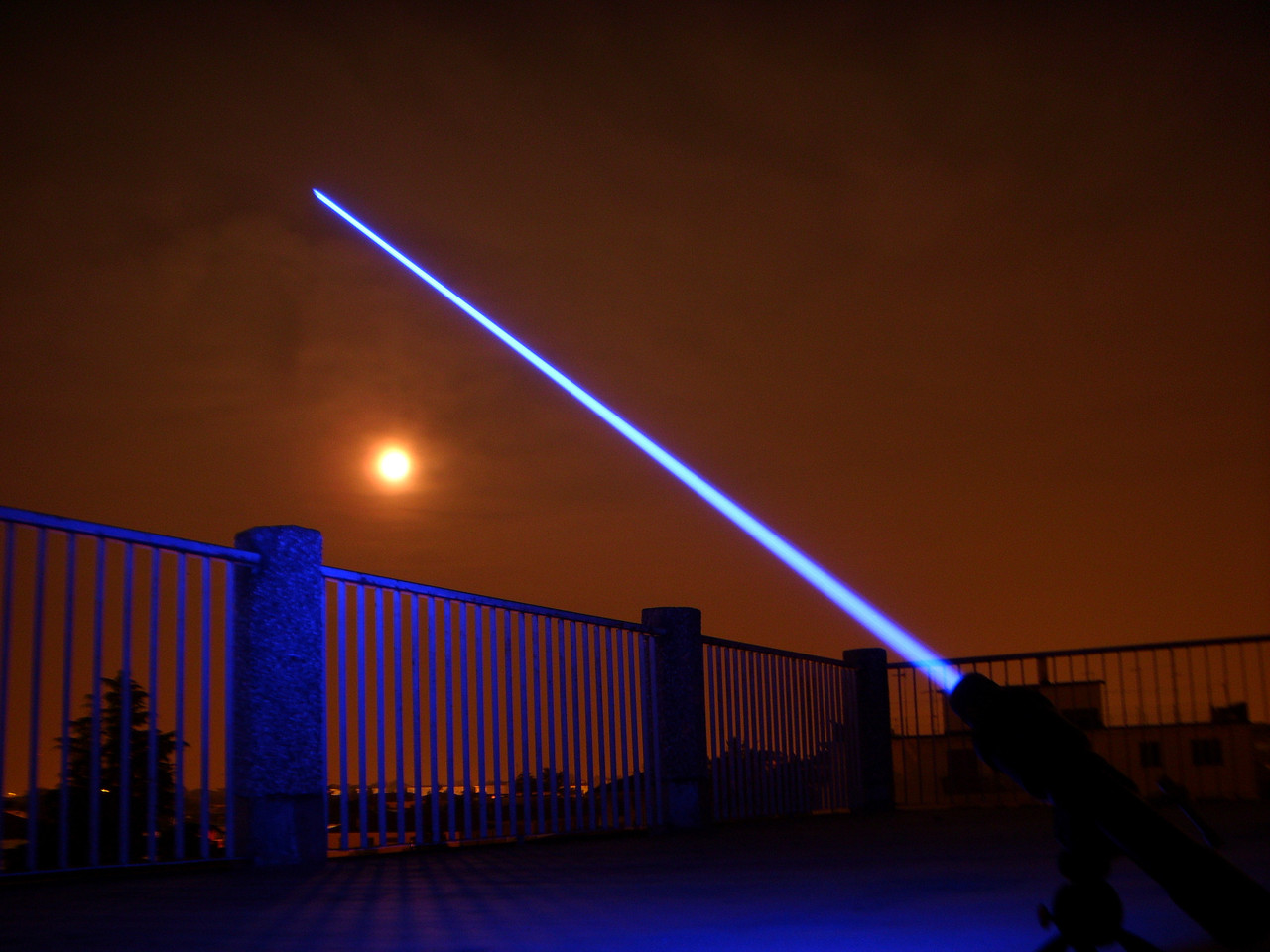 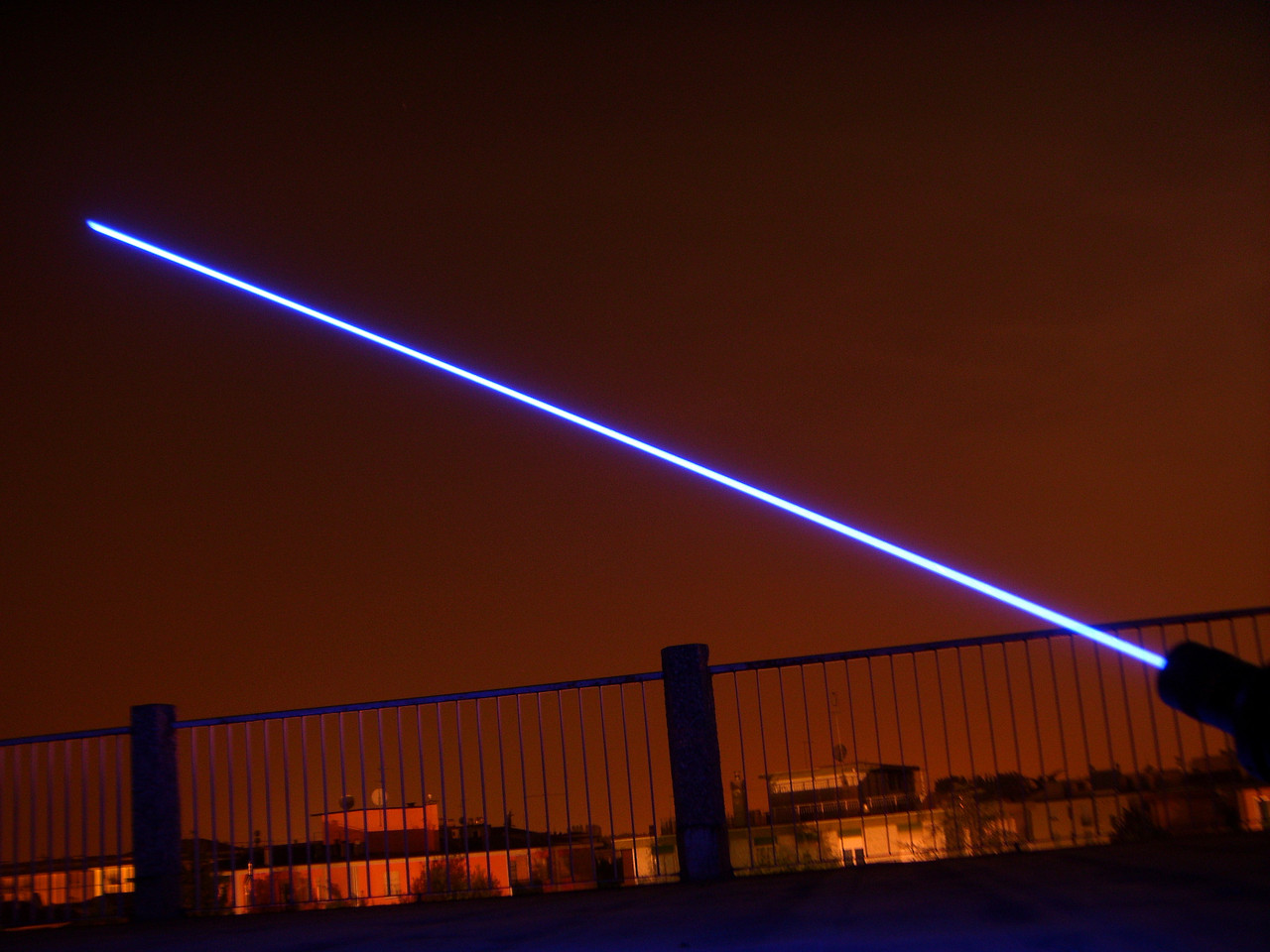 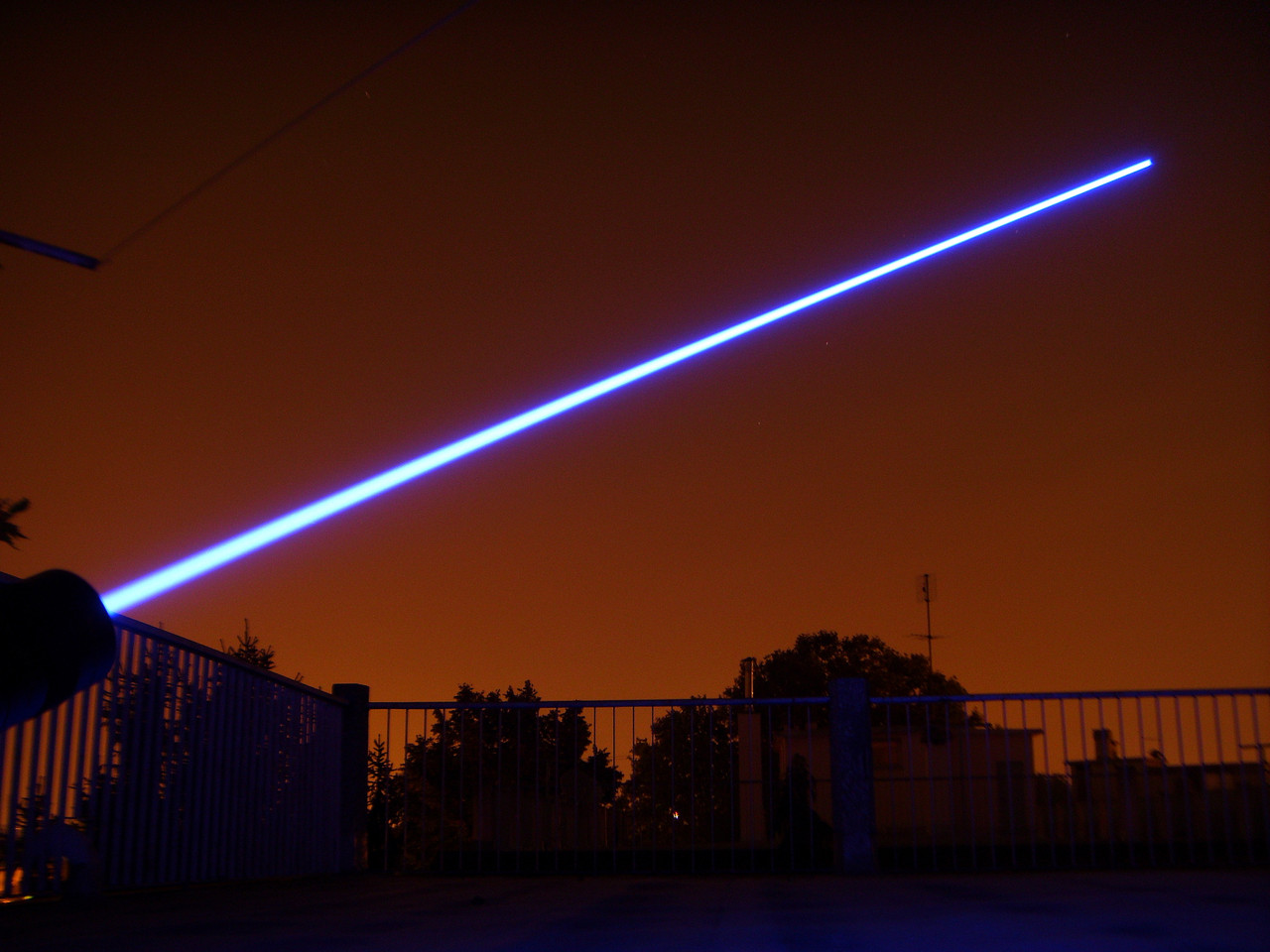 :drool: that's magnificent. What duty cycle do you estimate for it?

After one minute the Zaser is slightly warm and I shut off it for safety. I think that during the cold seasons I can reach 2 minutes.

how is the dot at long range? is it still a flat bar/rectangle or now a little more round? 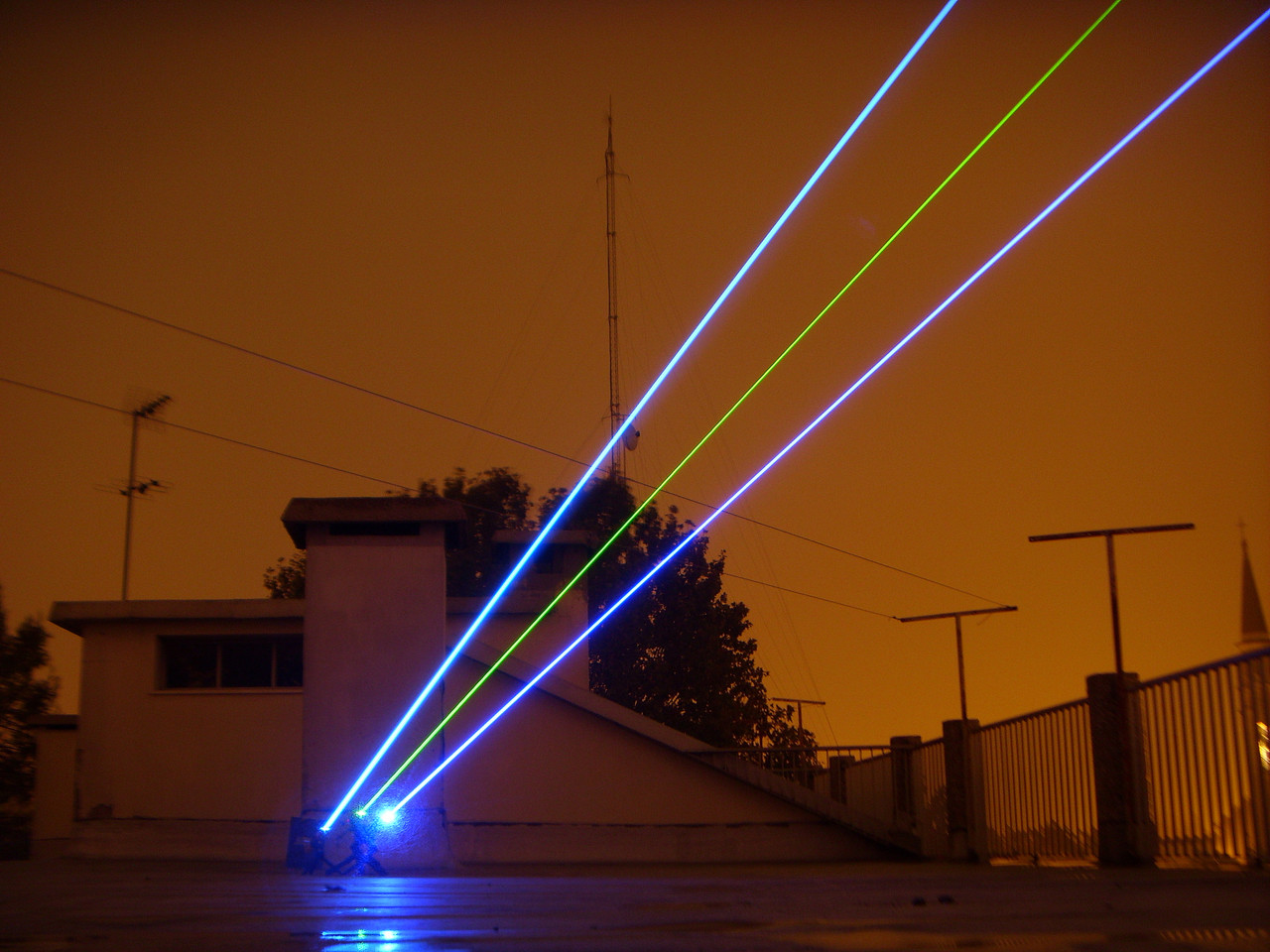 Beautiful build ! As always, exquisite attention to detail. I really enjoy your build threads. Great work adapting the beam expander. Bonus points for that ! You have a good eye for what a finished product will transform into. Can't wait to see what you come up with next ! I bet if it ain't a 10 it's a 9.9

Lol :thanks: a lot for Your kindly words.
I have three threads to do: the 4W c-mount red stubby build (if Lazereer does the miracle before the end of the world :crackup, the 1.4W 520nm Zaser XL polished version, and the video for my custom build rotating platform for rotating beams :beer:

Minamoto Kobayashi said:
Lol :thanks: a lot for Your kindly words.
I have three threads to do: the 4W c-mount red stubby build (if Lazereer does the miracle before the end of the world :crackup, the 1.4W 520nm Zaser XL polished version, and the video for my custom build rotating platform for rotating beams :beer:
Click to expand...