About 4 months ago I commissioned to CDBEAM777 a really hard-to-realize mod: adding corrective optics and Linos BE to a Zaser XL modified version.
In few words, a modify over a modify :na:
The childbirth was long, arduous, painful and expensive, but finally the little baby came to light!
CDBEAM fight various obstacles during its construction, obstacles that I avoid to list otherwise could clog the bandwidth

1. Design/machine an assemble which will mount on to a Zaser head and which will contain a set of 6X Cylindrical optics ( Plano concave and Plano convex) and will incorporate into the build the ability to mount a Linos beam expander on the very front end.

2. The optics should correct the majority of the astigmatic output delivered by the NDG7475 diode. The goal is to achieve an X/Y aspect ratio as close to 1:1 as possible and therefore deliver a minimal divergence.

3. Design/machine a Cylindrical lens mount unit which incorporates a sliding/translating component (trobone) which allows adjustment between the Plano concave lens and the Plano convex lens. This will be labeled as the RBT unit and be machined from 6061 Aluminum.

4. Design/machine an adapter to function as the mounting platform for the RBT and to be positioned between the Zaser host head and the Linos beam expander. This will be labeled as the H-BE and be machined from 6061 Aluminum.

6. Utilize a clear Acrylic Tube to act as a exoskeleton/ framwork to mount the H-BE and RBT within the tube. The tube will act to align and clamp the H-BE and RBT and to display the internal optical corrections.
7. Assemble and align all components to achieve both a correct beam of minimal divergence and a centerized beam axis to present to the Linos first input lens. 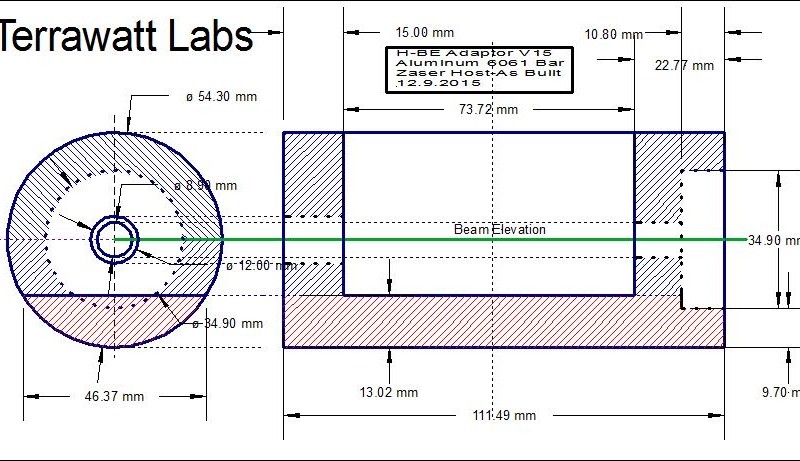 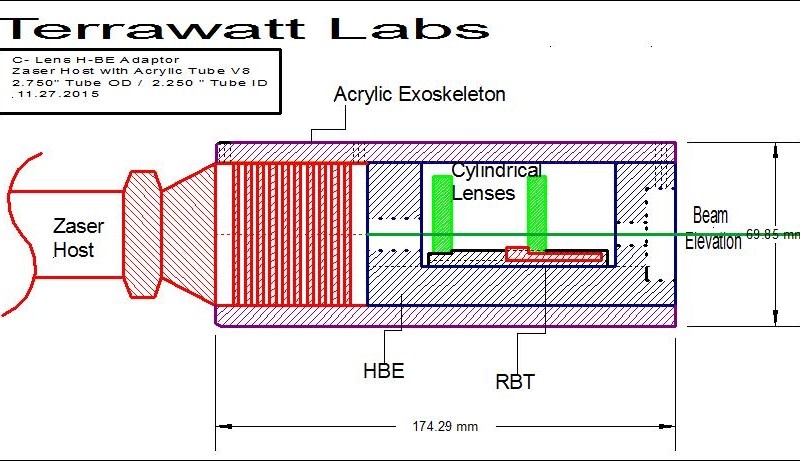 The "trombone" part (a CDBEAM idea, very useful to move back/forth one of the corrective optic lenses without the needs to unglue them): 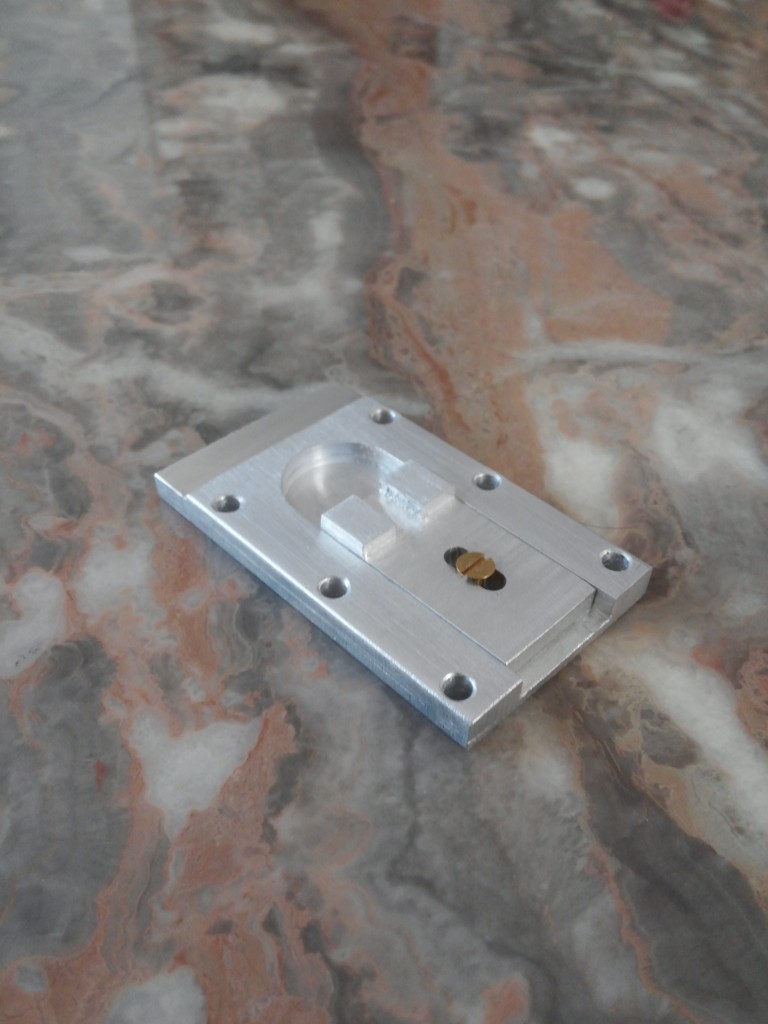 The corrective lenses glued over the trombone surface: The add-on well-machined aluminum container where every part will be mounted: 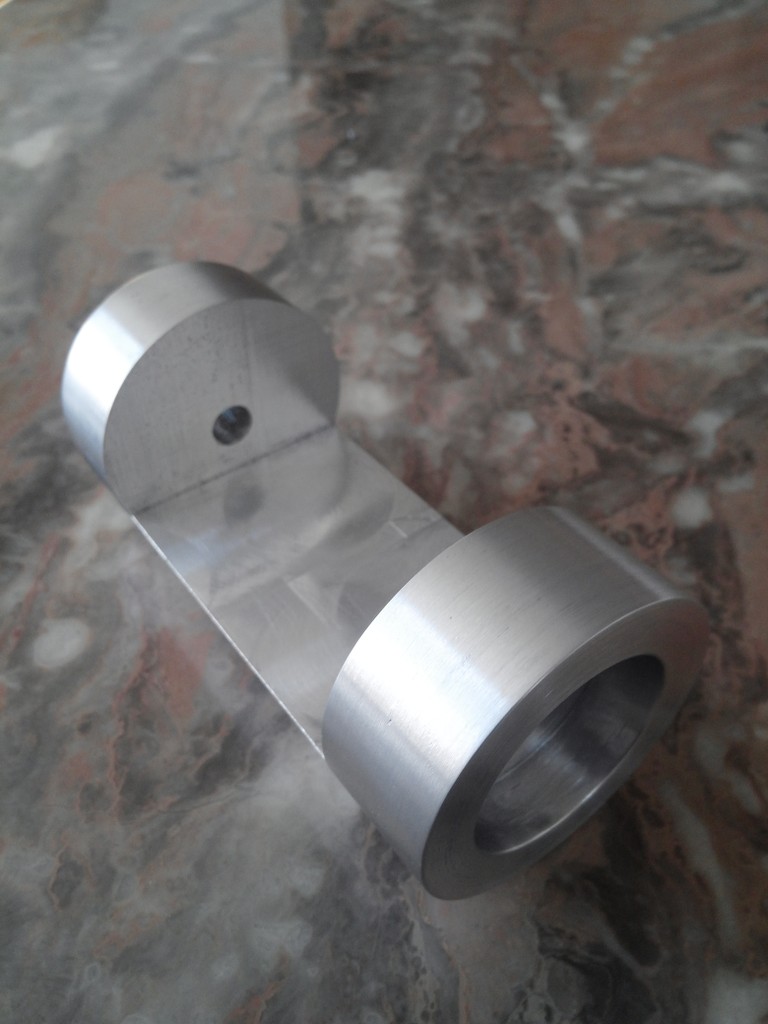 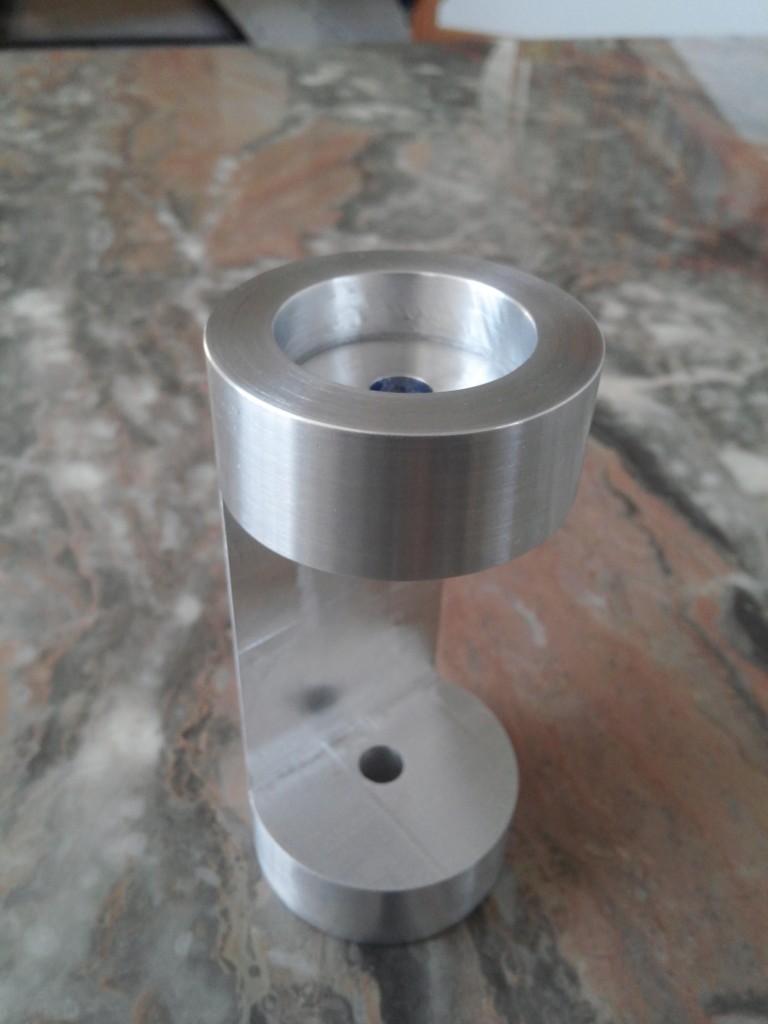 The acrylic tube ready to be machined: 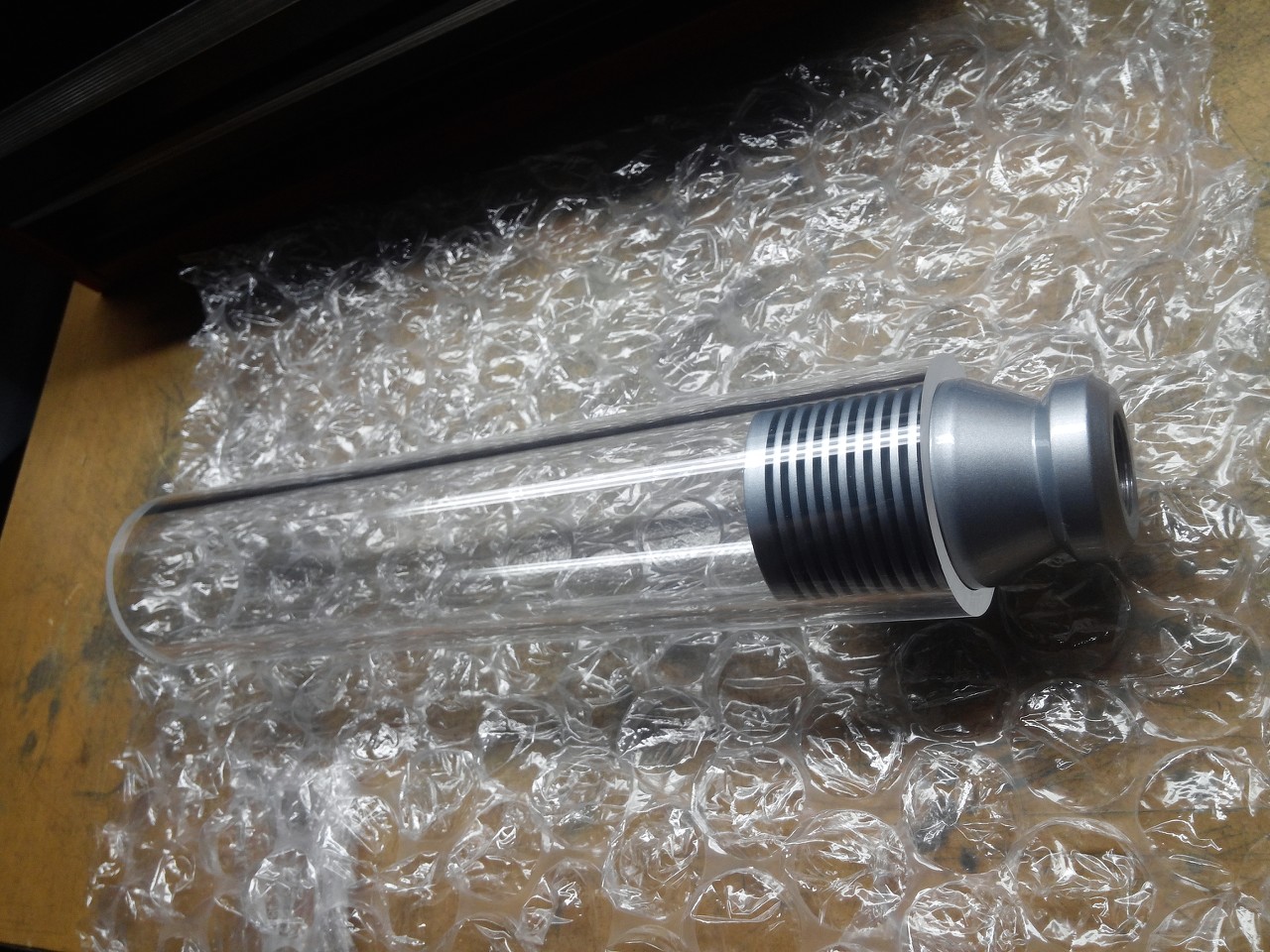 The shortened acrylic tube with chamfers, holes and nylon-tipped screws: 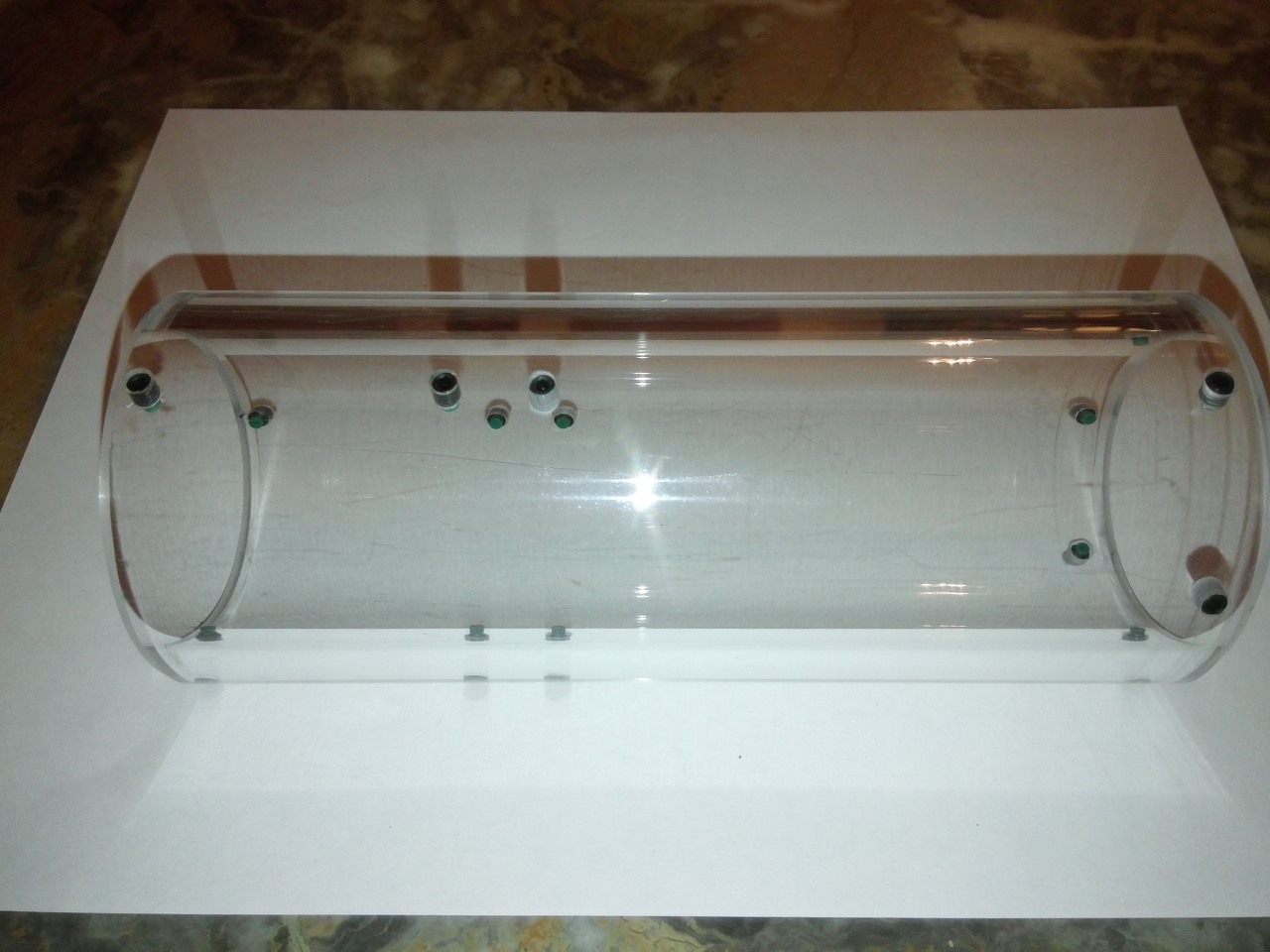 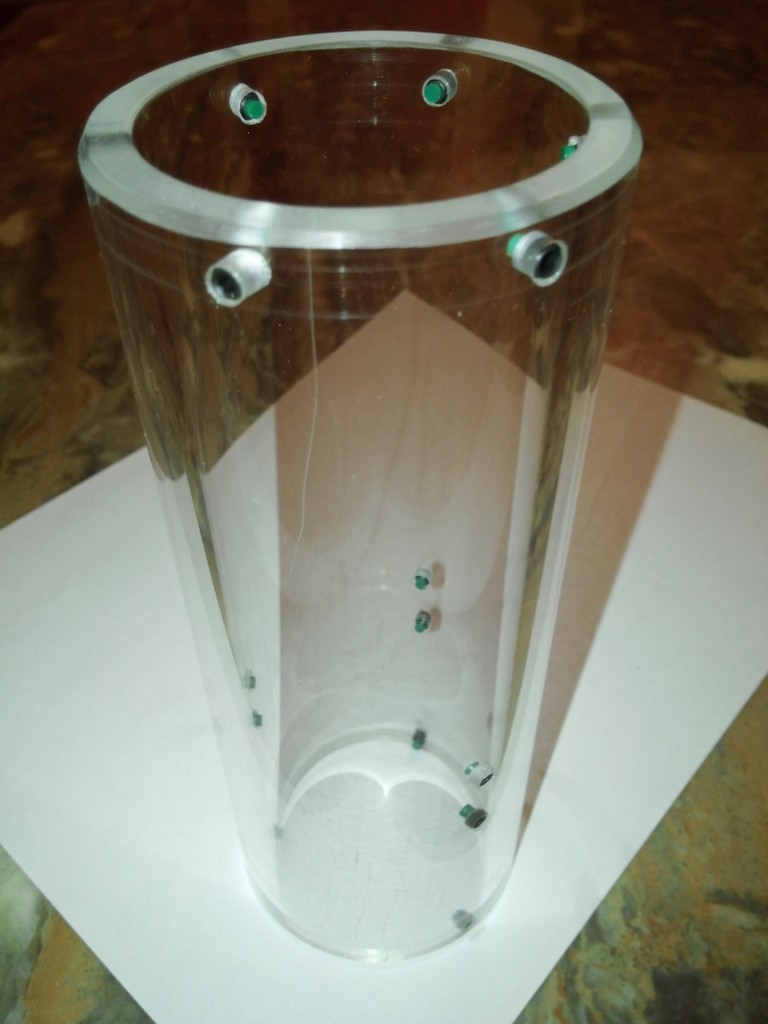 All the parts ready to be assembled: 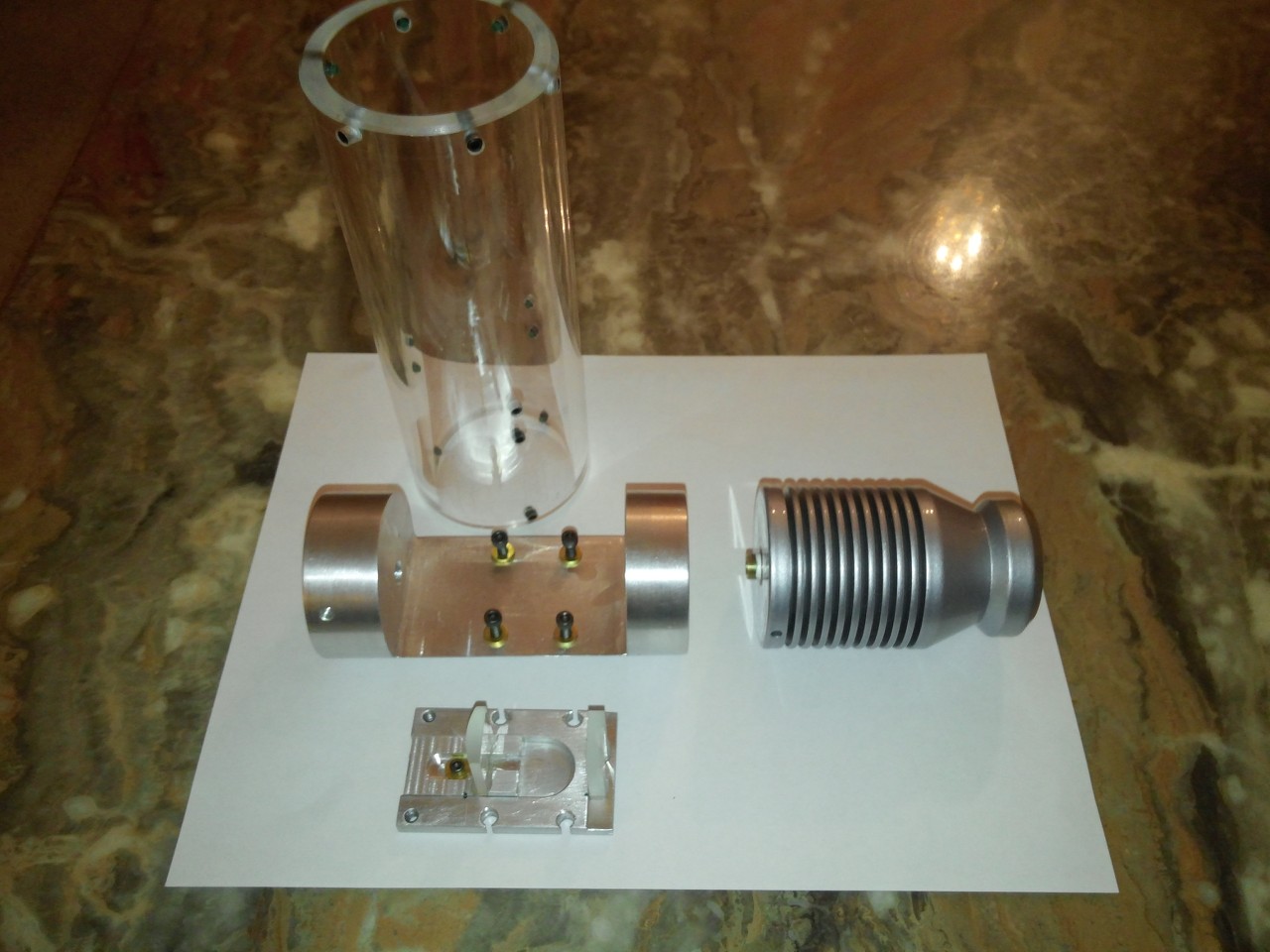 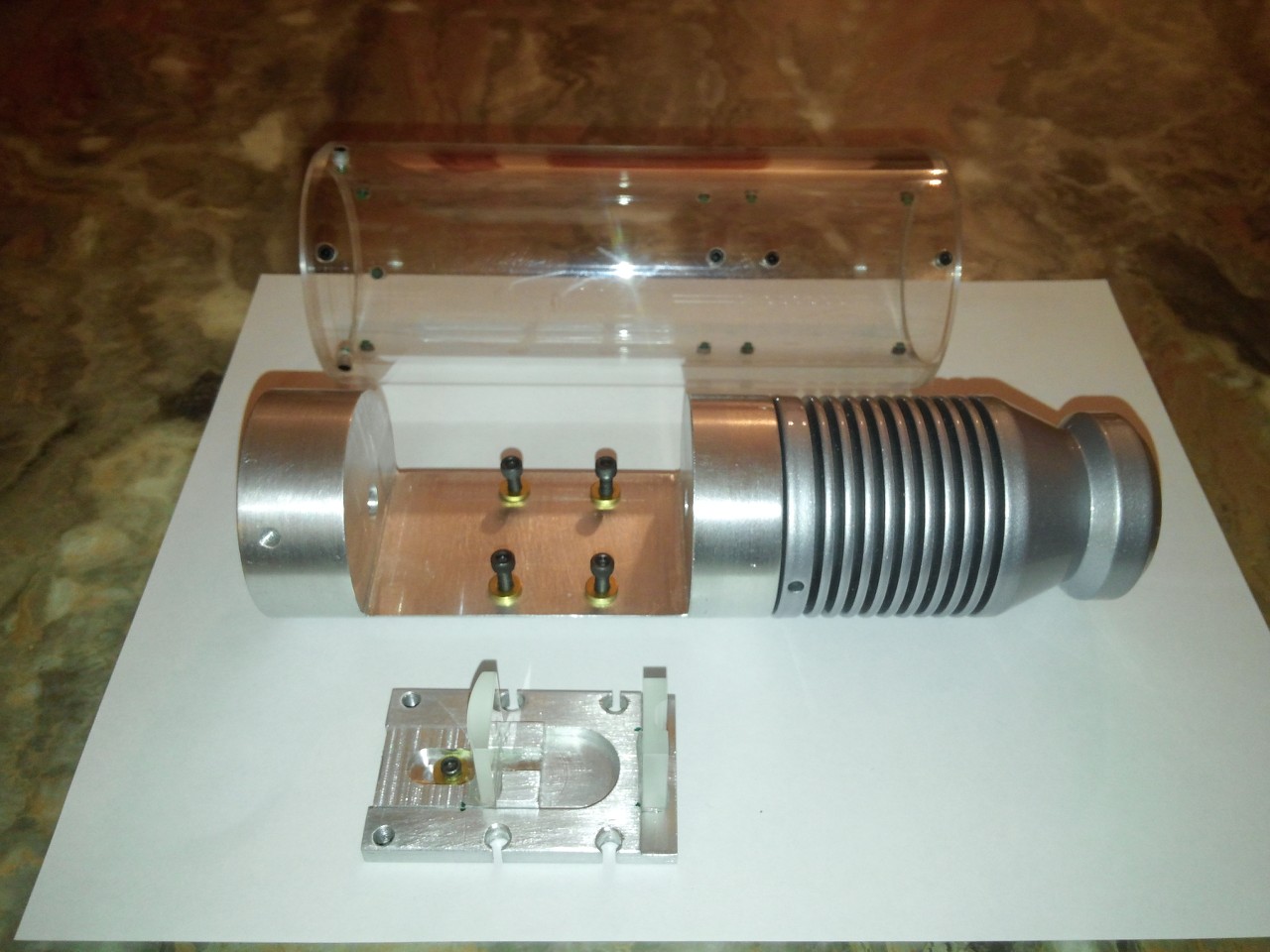 The "trombone" with correction lenses locked inside the aluminum adaptor: 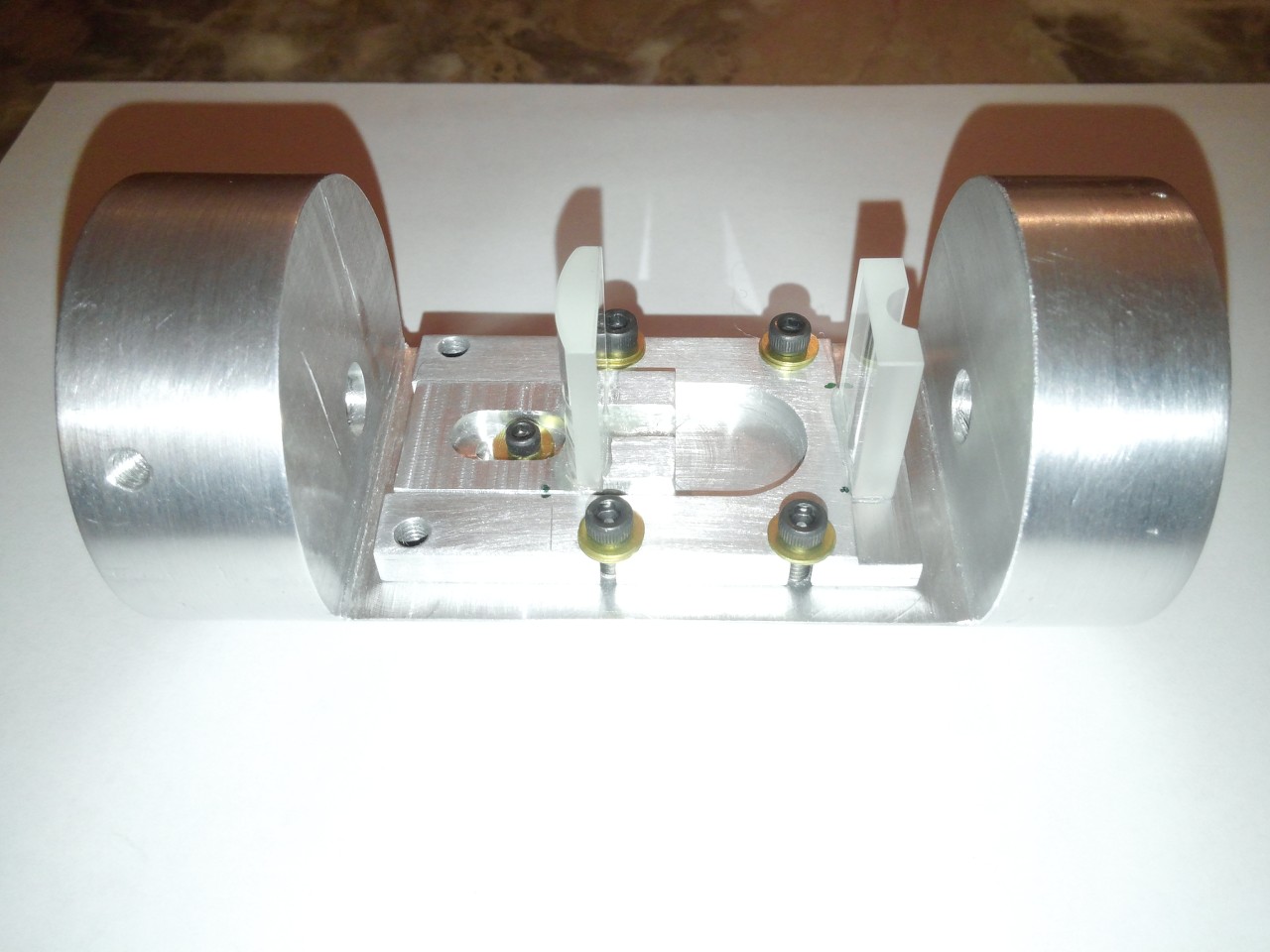 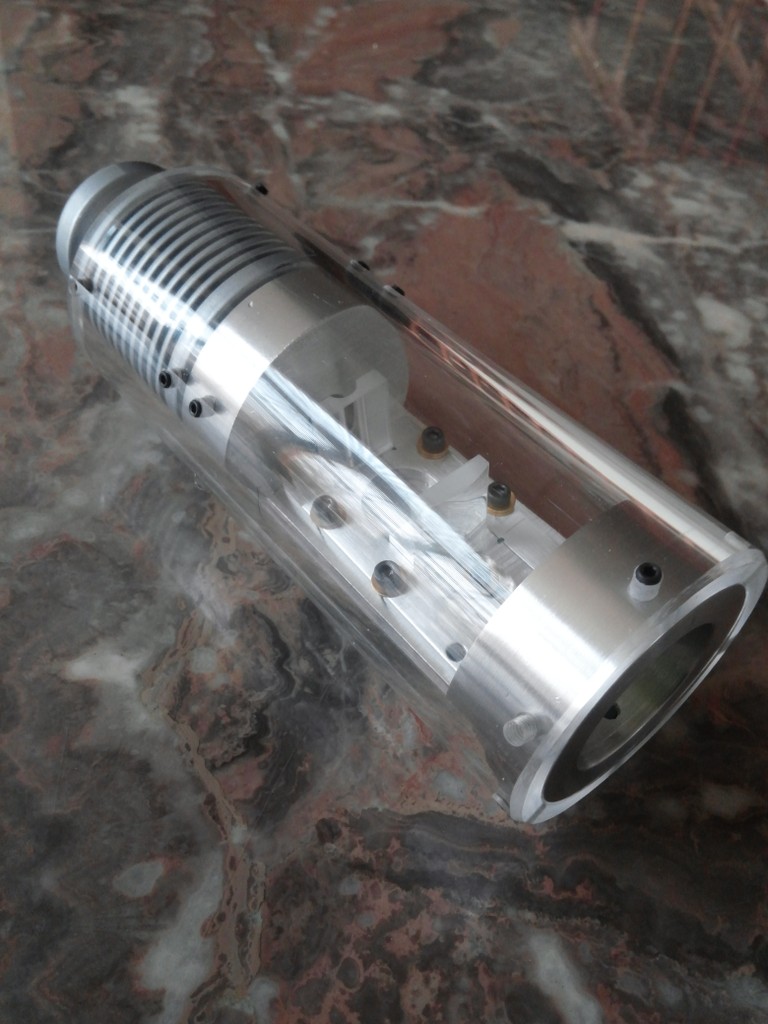 The head is alive: 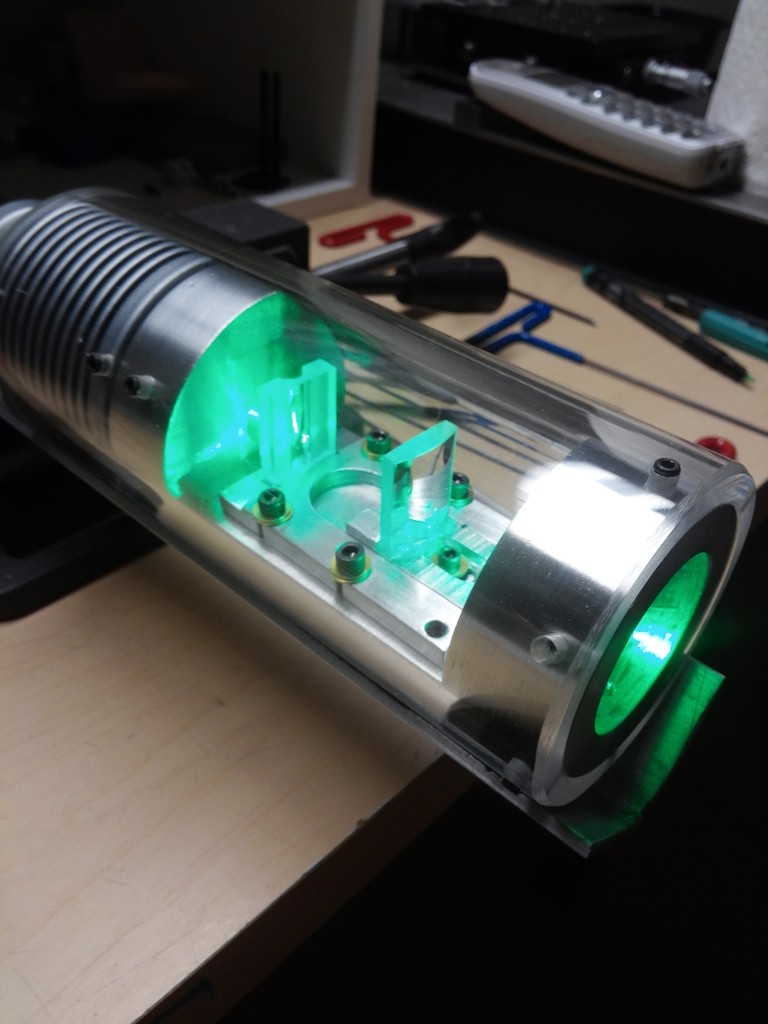 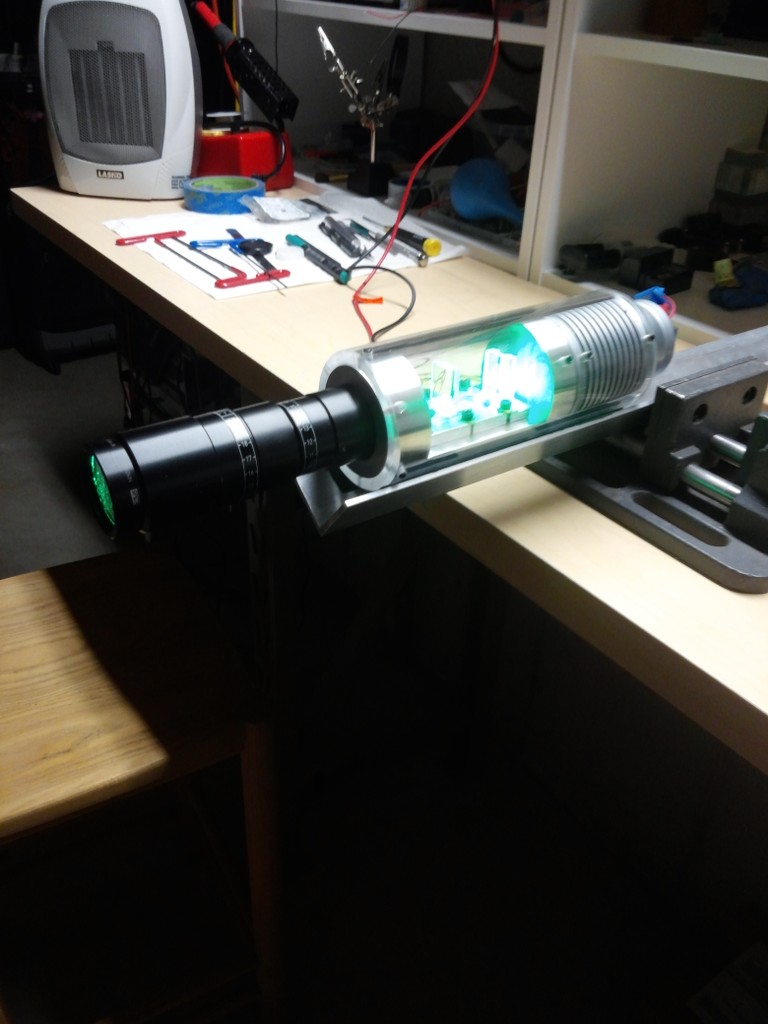 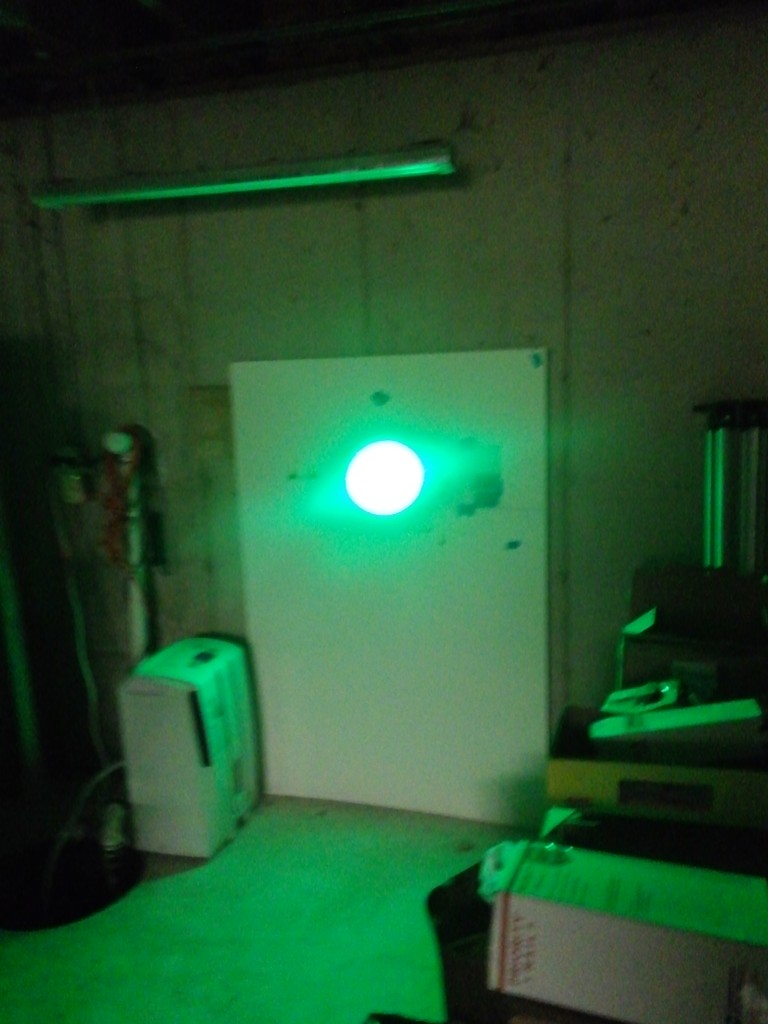 The ZACOP mounted on PEDCO ULTRAPOD II with Manfrotto superclamp: 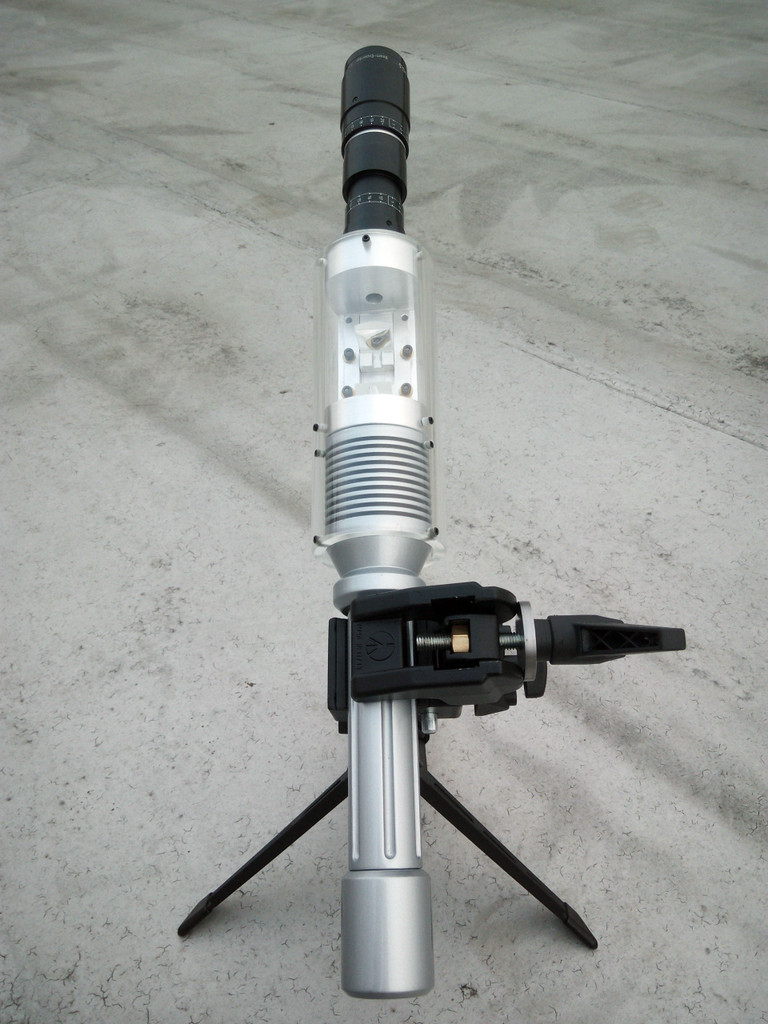 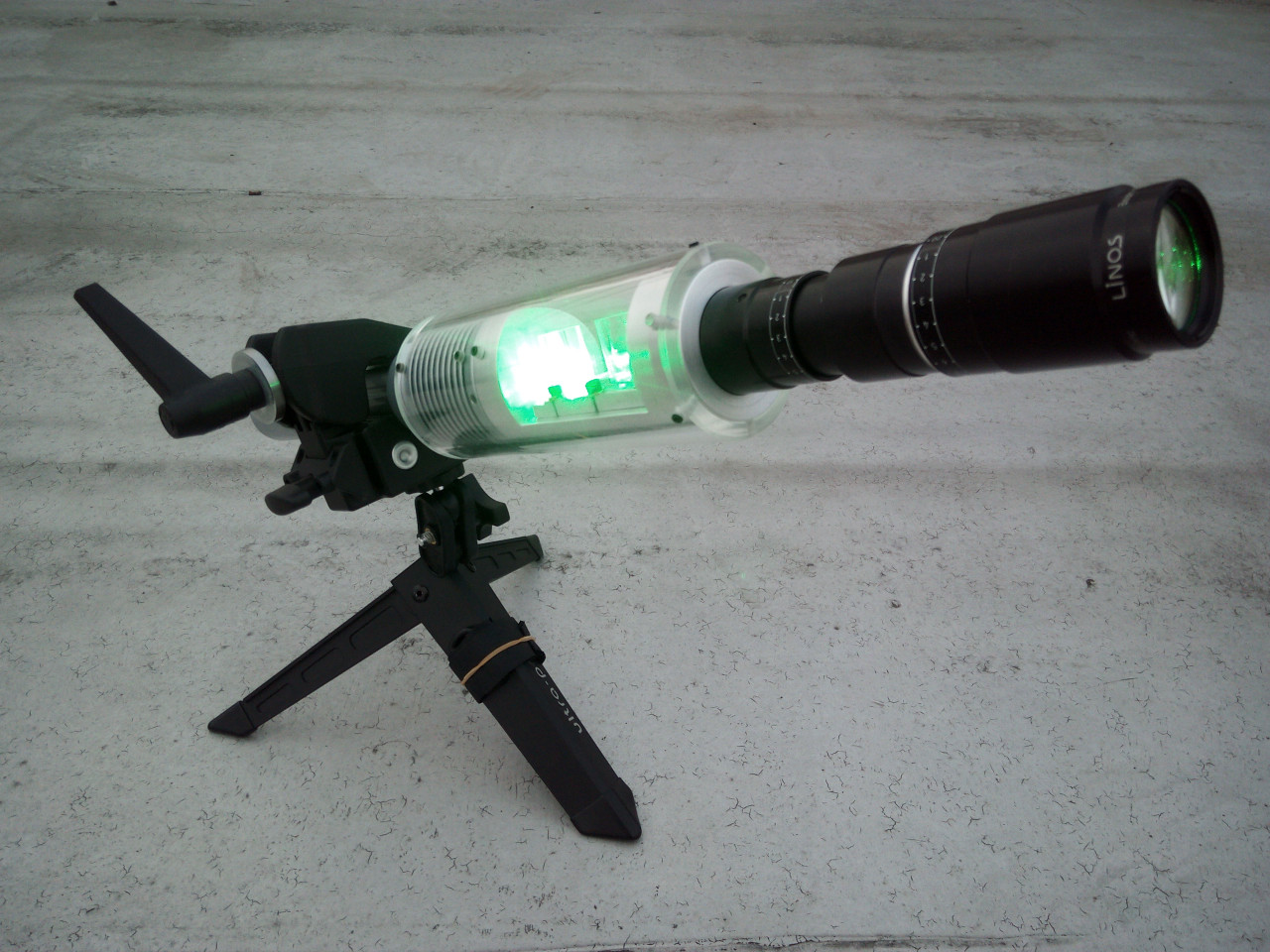 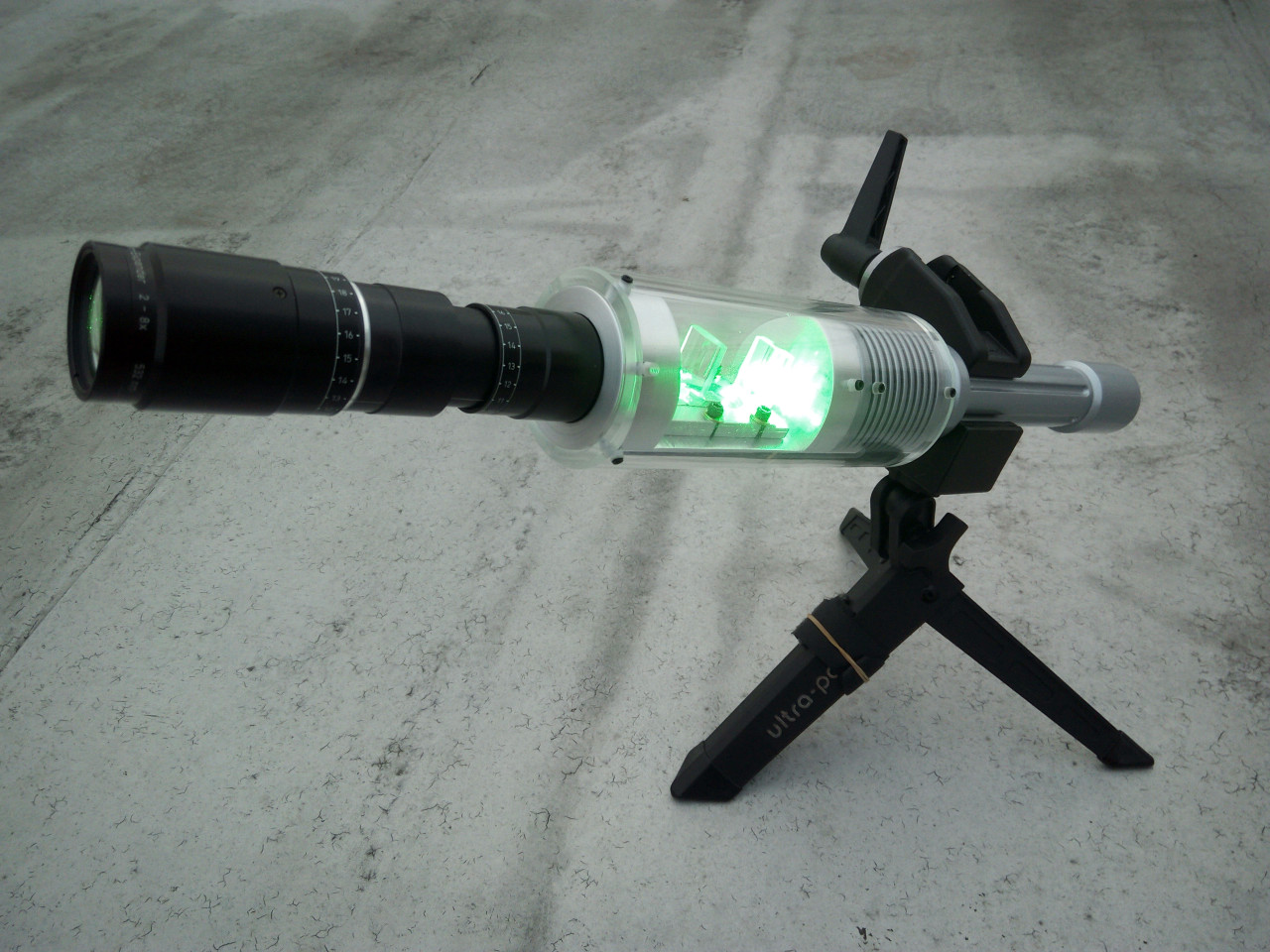 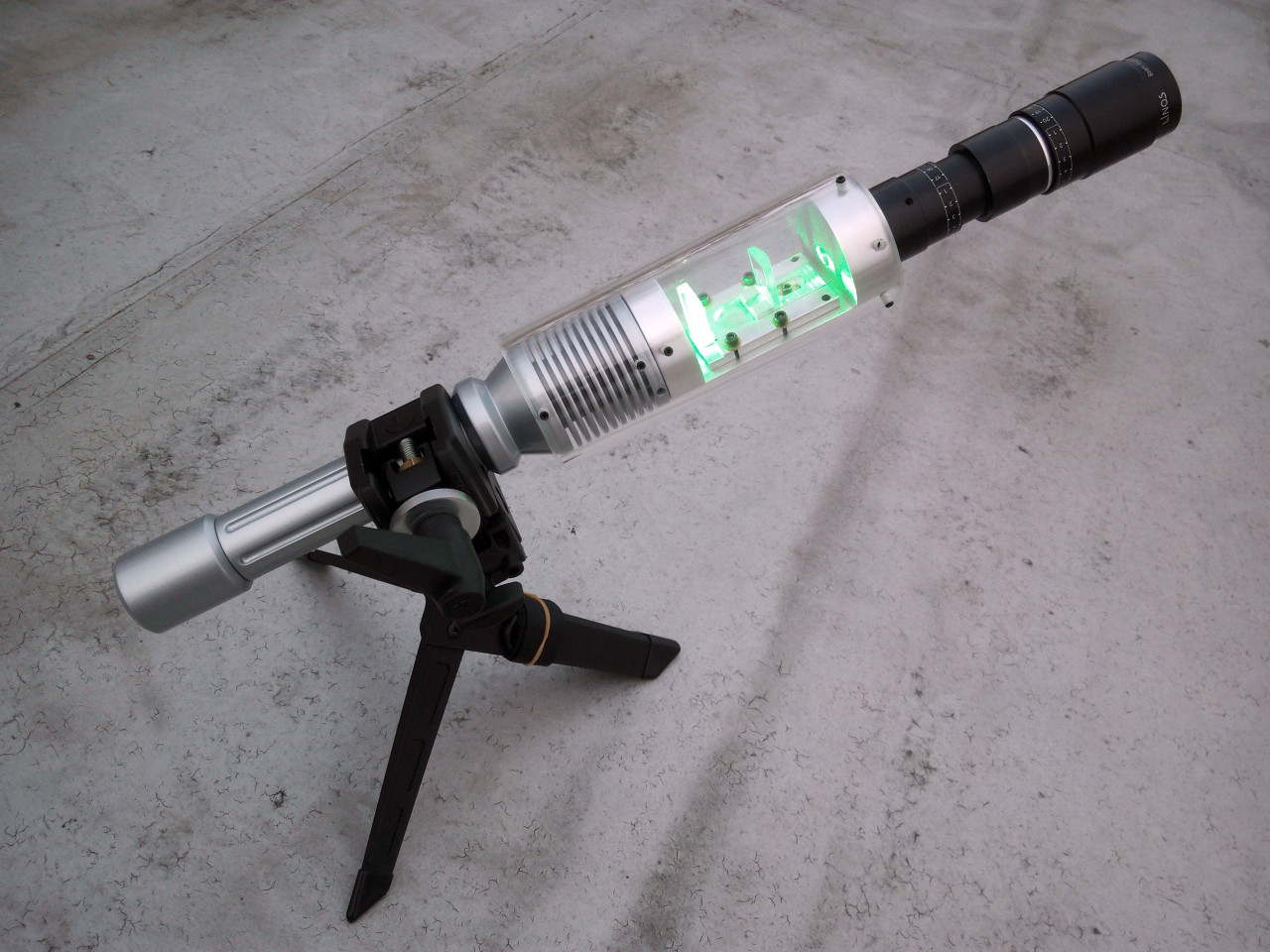 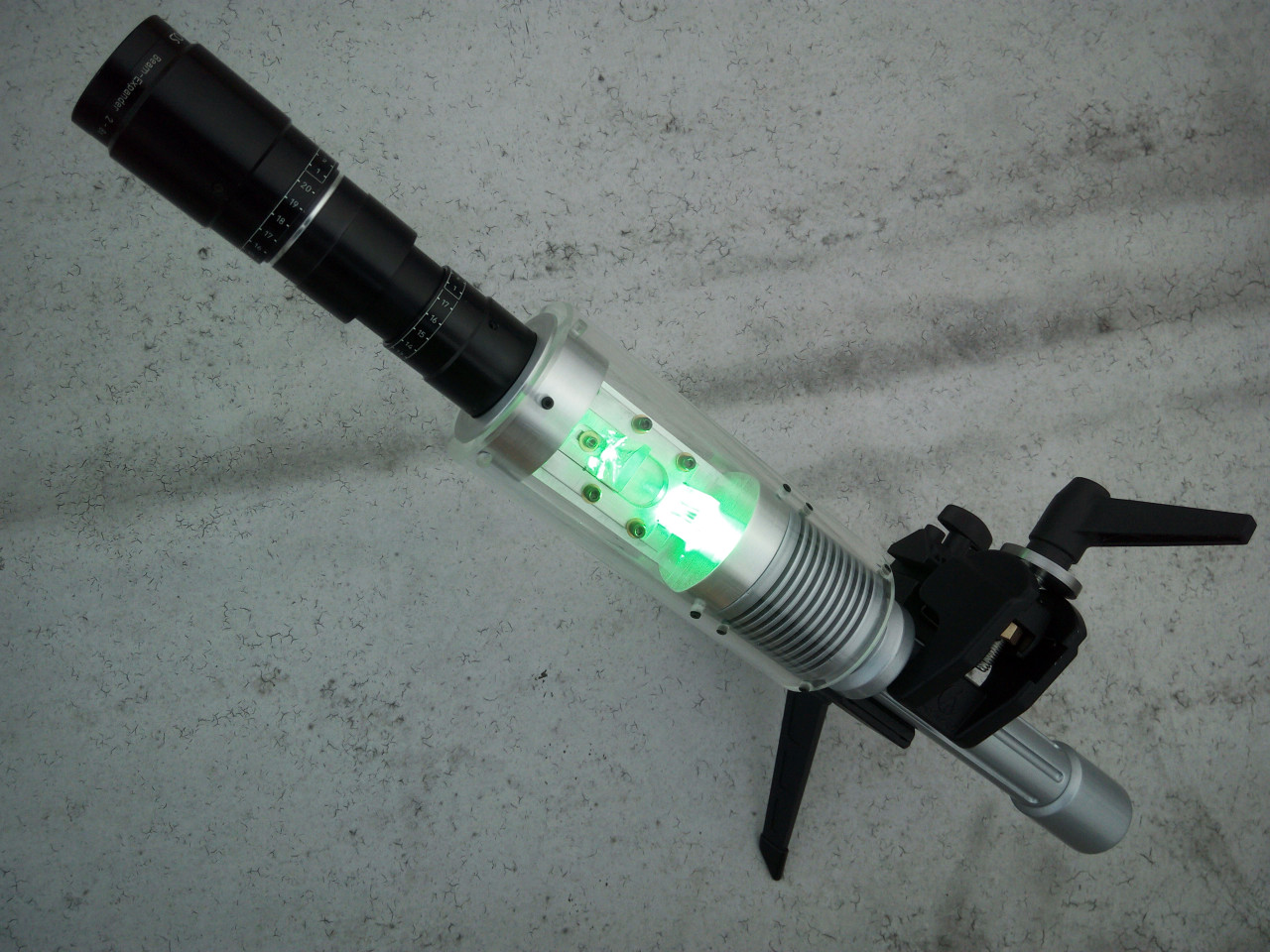 The most awesome beams ever seen: 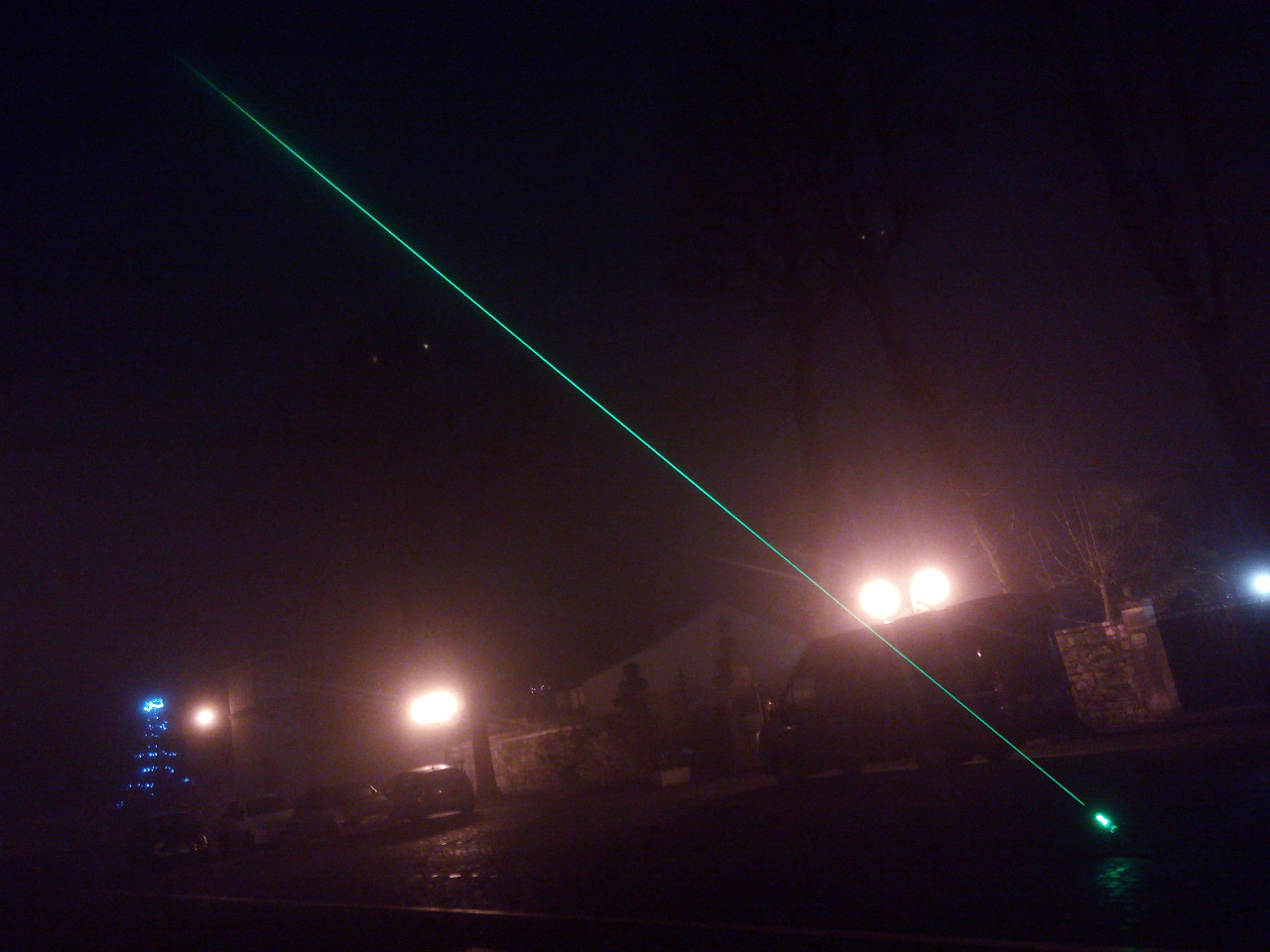 What You can see is the real beam bright. No long exposure was used!

The precision of a tiny rounded and collimated dot at 300 meters from the source: 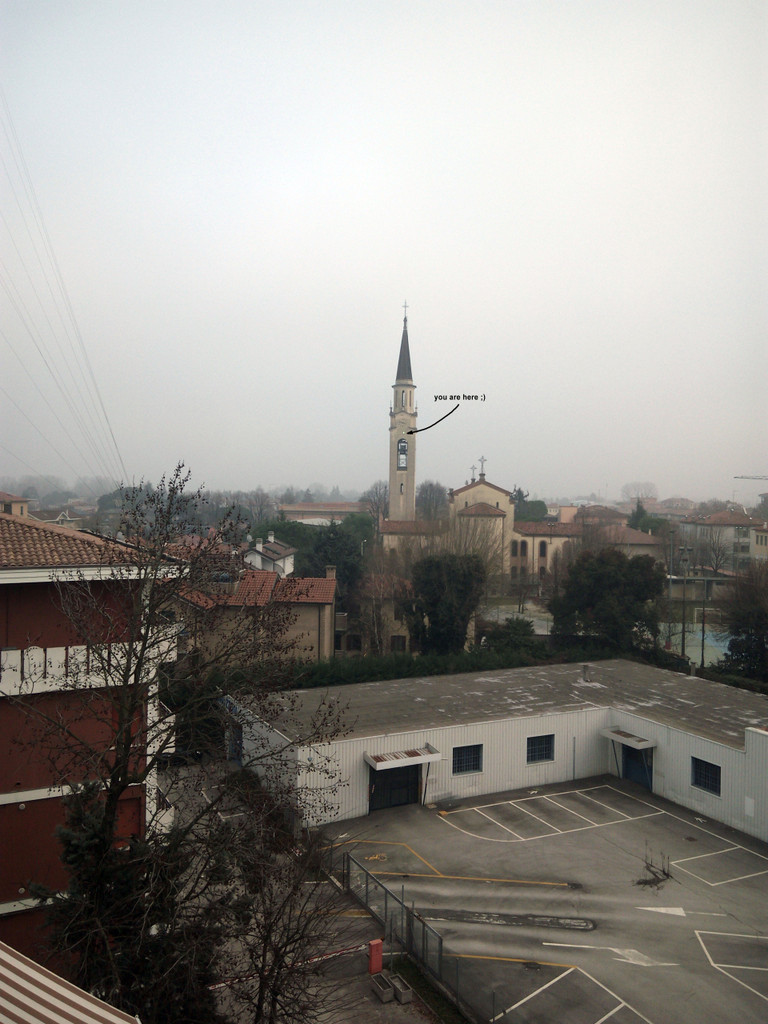 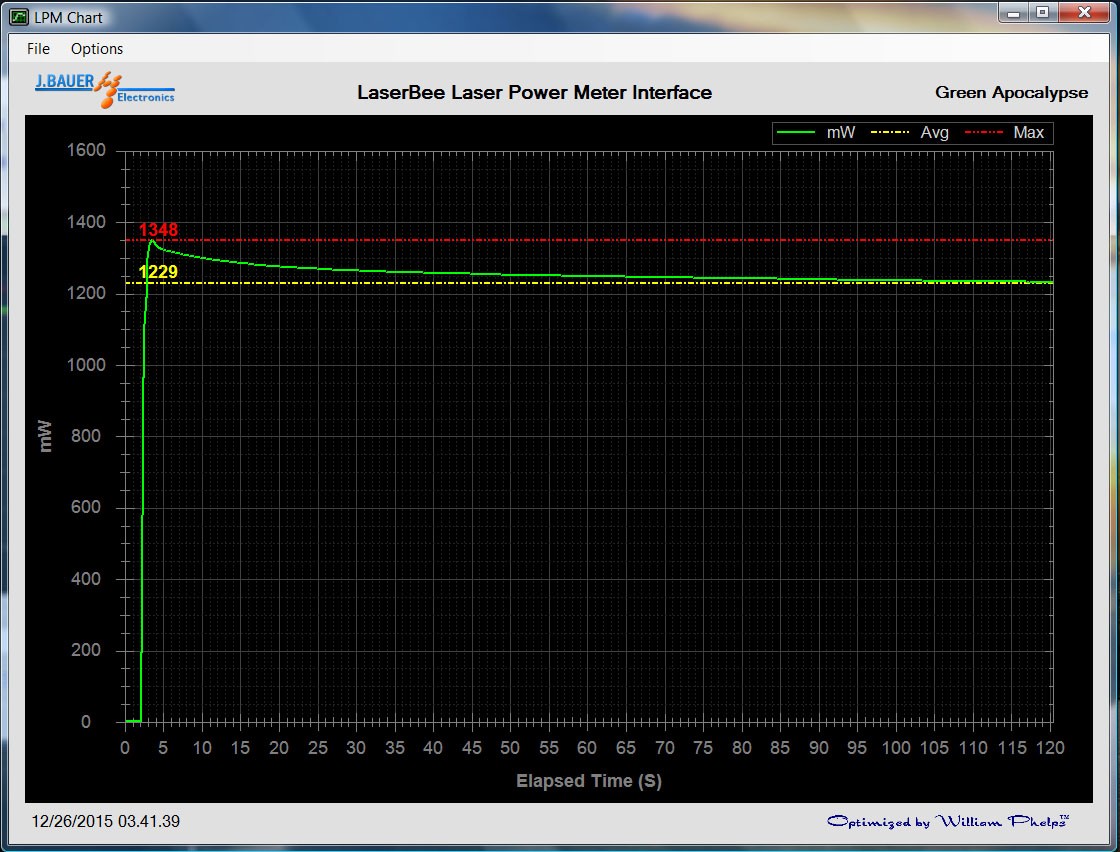 The power of a tiny rounded and collimated dot at 3 meters from the source:

Conclusions.
What I can say? The photos speak for themselves!
This is the most powerful, best corrected and best collimated green laser ever! This is surely the pearl of my entire collection!
This time I must to endless thanks CDBEAM777 for his incredible work.
Many thanks also to:

- CDBEAM777 (YES, again!!! );
- MrCrouse for his evergreen (modified) Zaser;
- Compagnin company for the silver metallized professional car paint;
- DTR for the diode and the driver;
- Linos company for the awesome beam expanders;
- Alaskan for his helps to found good Linos on eBay and to send them to me;
- Pedco and Manfrotto for the rock solid tripod and clamping mechanism

That is some truely fine laser p☆rn Minamoto, you continually outdo yourself!
A+ for the ZACOP cannon!

Merry Christmas and Happy New Year to You and to all the forum users !!
Last edited: Dec 26, 2015

That is awesome, CDBeam does some very nice work and it's good to see these MM diodes can produce a good looking beam.
I still haven't started working with my cylindrical correctives yet, but I know it's going to be necessary in our future.
Thanks to both of you for helping to lead the way. :gj:
Last edited: Dec 27, 2015

That is the most beautiful thing I've seen in so long! What I would give for something like that. I wished I had the knowledge in optics to build that. CDBEAM, where do I send the money?! Lol. :bowdown::bowdown::bowdown::takeit:

What is the output like without the BE and are you expanding the less divergent axis of the diodes output or reducing the divergence of the more divergent axis? I understand we need to square up the beam, but which way is the cylindrical pair being used to even out the divergence?

That was just awe inspiring. Thank you for sharing it. I can't rep you again, but you certainly deserve it.

People have told me the definition of fast and slow axis both ways, even looking it up it seems to vary, I just say more divergent and less divergent axis.
I have cylindrical pairs but have not set mine up yet, I have not been working on lasers much over the holiday.


Is this correct or backwards for the cylindrical pairs?

Or should I be expanding that beam and use the 2nd lens to lock it in where the axis's diverge evenly?
Last edited: Dec 27, 2015

Very cool, I didn't see this thread until RCB pointed it out to me, nice!

Excellent write up !!! Superb photos !!! Inspired joint design work !!! Hmmmm....who are the Rocket Scientist's that designed this ?? hahahaha !!! :na: I was privileged to be part of this project !!

OK...as far as Cylindricals....we are expanding the slow axis....to match that of the fast axis !! I know this sounds bass akwards....but...this is what we are doing...trying to make both the divergence of the X axis...and the Y axis...as equal as possible....for when they are unequal...or asymmetrical....or astigmatic....... we end up with a bar...not a round cornered square....that looks like somewhat a circle..

Optics are funny that way....sometimes....hard to wrap your head around !!!

I wished an established member would make a "10 best custom builds of all time" thread, because this one would definitely make it on there!

I think there are a few opinionated threads here some where that feature favorite builds, unique builds, expensive builds, etc.
this OP would be up there!
Pman started this threads that's been pretty popular:
http://laserpointerforums.com/f72/post-your-pics-unique-builds-no-one-else-has-92404.html

There have been a few top build I can think off off the top of my head,
Ahh, there was a RGB that was adjustable, big hit. That member has been quite for some time.
Someone built a 488 diode build with a 488 LED iirc.
http://laserpointerforums.com/f42/488nm-direct-diode-20mw-cni-pgl-iii-c-custom-build-88160.html
Personally I am partial to janders duel 411 builds and that has a similar theme to this build.
Last edited: Dec 28, 2015

Down with Umbrella said:
I think there are a few opinionated threads here some where that feature favorite builds, unique builds, expensive builds, etc.
this OP would be up there!
Pman started this threads that's been pretty popular:
http://laserpointerforums.com/f72/post-your-pics-unique-builds-no-one-else-has-92404.html

There have been a few top build I can think off off the top of my head,
Ahh, there was a RGB that was adjustable, big hit. That member has been quite for some time.
Someone built a 488 diode build with a 488 LED iirc.
http://laserpointerforums.com/f42/488nm-direct-diode-20mw-cni-pgl-iii-c-custom-build-88160.html
Personally I am partial to janders duel 411 builds and that has a similar theme to this build.
Click to expand...

Thank you very much! I love Pmans thread, also that 488 is so beautiful! The adjustable RGB is one of the lasers that got me into this hobby! I'll have to take a look at the dual 411's you've mentioned.

I was thinking something like a vote for the 10 best builds, then placing them in a permanent list (until a new one comes along, to take a spot) I think it would be competitively fun, and make folks more apt to make a "fancier," for lack of a better word, design; and to put them on the forum.
You must log in or register to reply here.
Share:
Facebook Twitter Reddit Pinterest Tumblr WhatsApp Email Share Link