That was great, Jeff. It reminded me of all the NASA flights in the 1960s through the 1980s. I missed this today, so :thanks:

Too bad about the center core but the landing of the outer two was mind boggling. I thought it was CG for a minute!

The outer 2 landed slightly staggered rather than exactly together because they were concerned that the radar could interfere between the 2, but it worked perfectly, you can see the rockets jet moving right/left, very impressive.

The landing of the boosters was very impressive. That was something I had not seen before today.

Well, they have had some practice, still it was very impressive, the center was low on fuel and could not quite make the drone ship so it hit the water near it at 300mph but some of it was said to be salvageable.

The 2 outer sections were both used before and landed before, however they are all series 4 and they are going to series 5 so the center was not going to be reused anyway, but it's always good practice.

Check out " How NOT to land a booster "

I saw the launch yesterday....
What impressed me was the simultaneous
landing of the boosters...
Too bad the main section didn't make the
expected landing.
Great new technological stuff just the same...

The Wright brothers also needed many test
flights to get it right...

lasersbee said:
The Wright brothers also needed many test
flights to get it right...
Click to expand...

Agreed, the best things are never the easiest and don't usually work first time. It take hard work and perseverance to achieve things like that.

That's for sure, 'practice makes perfect', and they're definitely getting better at it.

@RCB, that's a great video, thanks for sharing. :yh:


One thing is for sure, they have given the re-entry issue a lot more thought than this poor guy! :crackup: 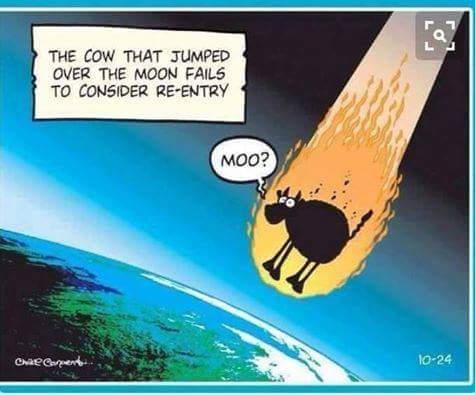 Hey Paul,
I too miss the broadcasts of the Mercury, Gemini, and Apollo missions. Network TV used to interrupt shows to show it. And watching Walter Cronkite explain everything was a big part of it too. Another favorite part of watching the broadcasts was the simulations they would show us to explain things before the age of computers, like a 50's sci-fi fi movie. To this day I still have all of my National Geographics from the sixties and seventies that dealt with each mission of Mercury, Gemini, Apollo, and all of the ones from Viking missions and Voyager missions. Brings back great memories of when I was a kid

Just a phenomenal accomplishment yesterday! If anybody watches the show "Young Sheldon", about a month ago Sheldon came up the math and showed NASA how to land a rocket booster. They said the idea was good but they didn't have the technology to do it in 1989 (when the show takes place). The show ended with Elon Musk about to be interviewed about successfully landing a booster rocket. Right before the interview is to come in his office, he hides Sheldons notebook implying he "borrowed" the idea from Young Sheldon work almost 20 years.

Wow, that brings back a lot of old memories, I still have all my old Nat. Geo's also! :yh:
Their will never be another Walter Cronkite that's for sure. Back then as soon as the rocket got out of camera range, anything visual relied on those simulations.

Some day millions of years in the future, long after humans have gone extinct and remnants of our civilization are mostly eroded away, some aliens exploring the galaxy will find that car floating in space and just be like "WTF was going on here" lol.

Hopefully a few more countries can step up to the plate so there is some more competition and maybe even another full space race. Get the level of interest in space back to where it was during the 60s/70s so that more resources will be put into space exploration. I am really hoping that extensive missions and exploration of Mars, Europa, Titan, and Enceladus are done during my lifetime.

Yes, Walter Cronkite had the trust of the American populace. It was always a joy to watch him report the news and when he turned against the Viet Nam war, LBJ remorsed that he had lost the country if Walter was against it.

Ears and Eggs said:
Some day millions of years in the future, long after humans have gone extinct and remnants of our civilization are mostly eroded away, some aliens exploring the galaxy will find that car floating in space and just be like "WTF was going on here" lol.
Click to expand...

Other than catastrophic nuclear self annihilation on
Earth... I can see the human race sprinkled across
our Galaxy and exploring it in millions of years...

My father had an office on 5th avenue so he was able to take me to the ticker tape parade for John Glenn after his flight. I remember everything about that flight including the heat shield scare. The steps for the moon shot were worked out long before it actually occurred. As a kid, I memorized as much as I could and actually used to have dreams that I was going to the moon!

When you think about those early flights and compare them to this one as well as the challenges to returning three boosters in one piece.... it is incredible. So many different moving parts all having to function with a zero percent failure rate. I remember reading something that I have never forgotten. If cars were built with the same reliability that was required of the parts that comprised the Saturn V, that it would not require a maintenance check for 100 years.

While perhaps that might not be literally true, there is certainly some truth to it. This brings us of course to the understanding that although it might be possible, built in obsolescence dictates that such a car will never be built....unless you make it yourself.

But where is CE5?
Did he go for an space travel or what?! :thinking: