Shiny Chromed all copper Sinner host with a 1.5W NDG7475

It was just around Christmas when I had saved up funds to buy a nice shiny new laser and host as I had my eye on the 1W 520nm as my favorite color is green. I never got around to posting anything on the unit so here it is.
The host was purchased from Sinner and is called the Cypreus-IIb. It is an all copper host with copper module. The module screws in tight and holds a standard 12mm module that slides in very tight also. Took a lot of effort to push the module in but boy does it transfer heat well. It's pretty amazing how fast heat transfers through the entire unit so quickly so if your looking for some serious heat-sinking ability one of these babies should be seriously considered in the running.
I've seen others buy them as straight copper but Sinner offers a thick chromed version (which I obviously purchased) that makes the whole unit look nasty bright and is very classy. I figured brightest diode with brightest host and it sure didn't disappoint.
I like to build units but this time I purchased the whole complete module from Jordan (DTR). It's set at 2.4A (X-Drive) and looks like this:

Here's the extra sink I purchased with the unit. Basically it means you can buy a bunch of them and run whatever you want in the host with an easy change: 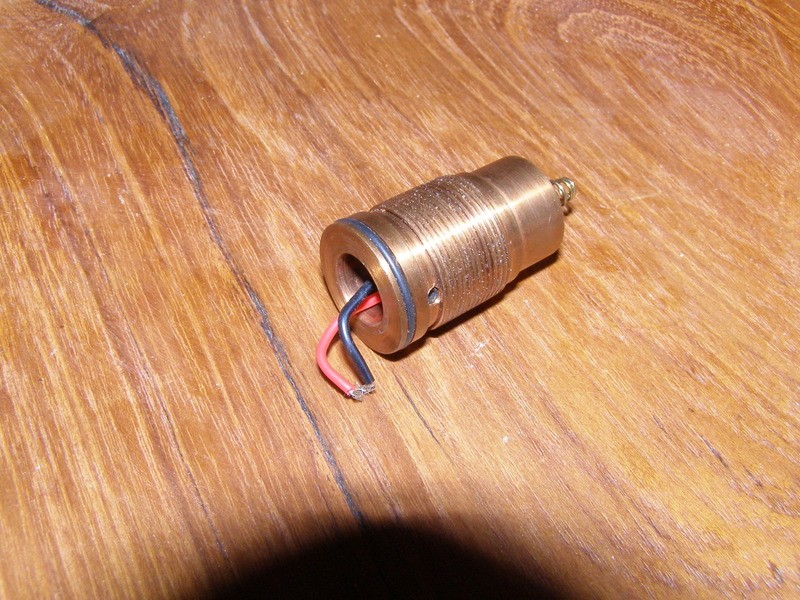 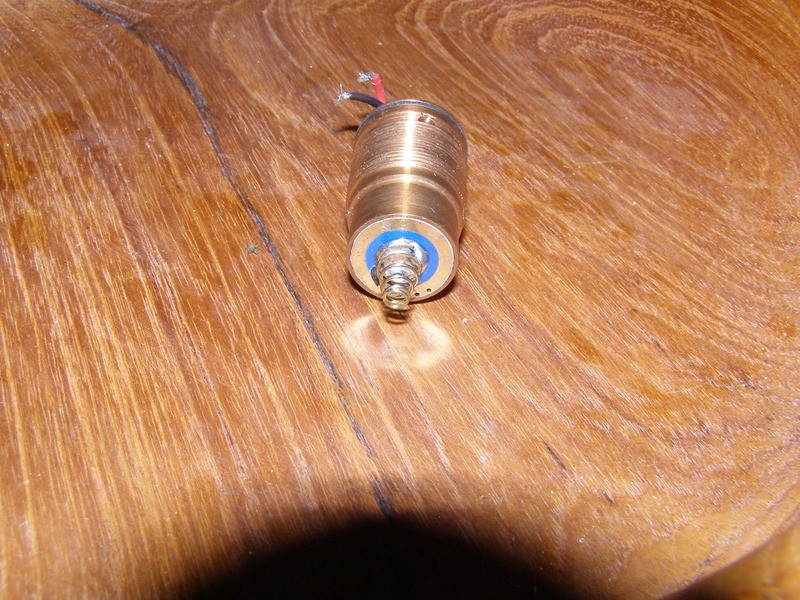 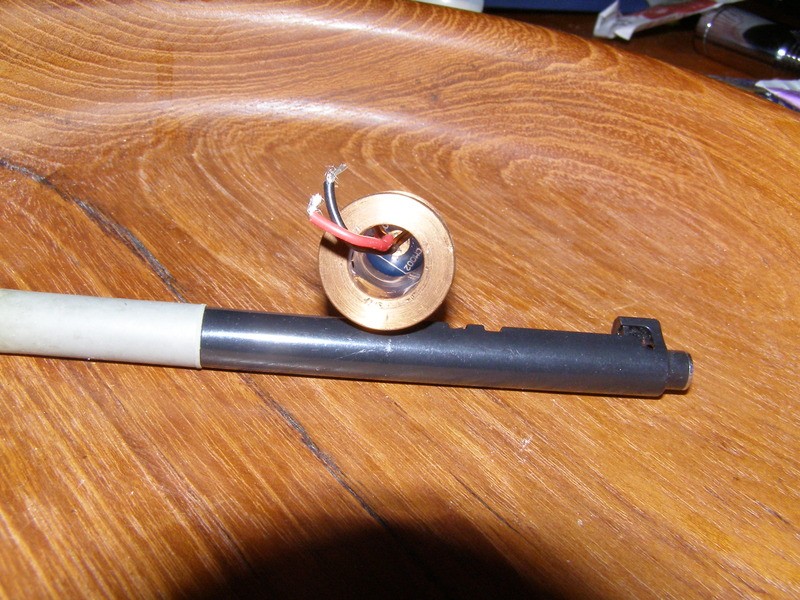 Weight of the sink: 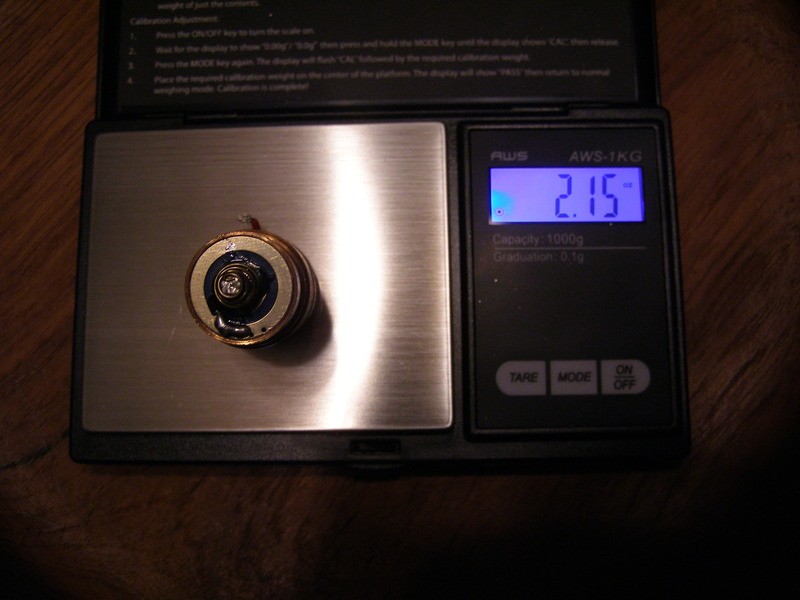 Weight of the unit with batteries: 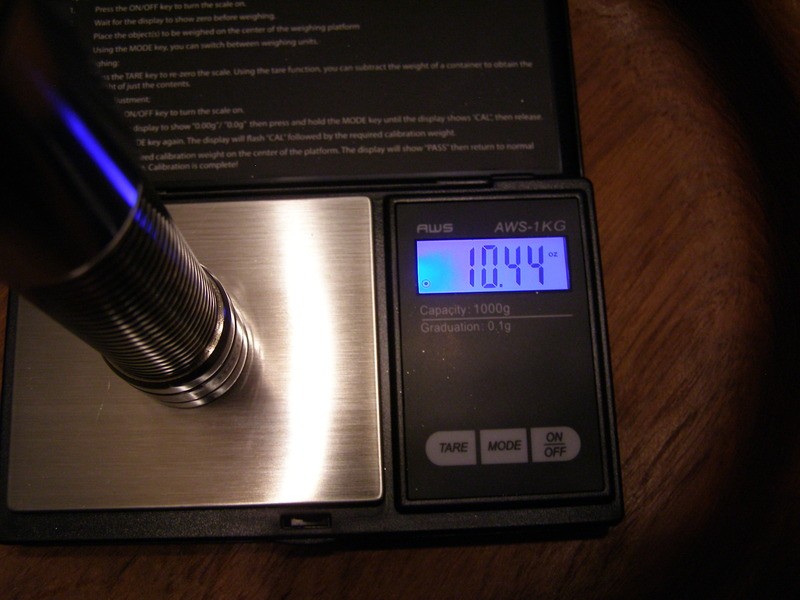 Various pics of host. Hate how the pics make it look like it's got pits or scrapes though because it's really just smooth shiny. I should have taken a cloth to it before taking the pics: 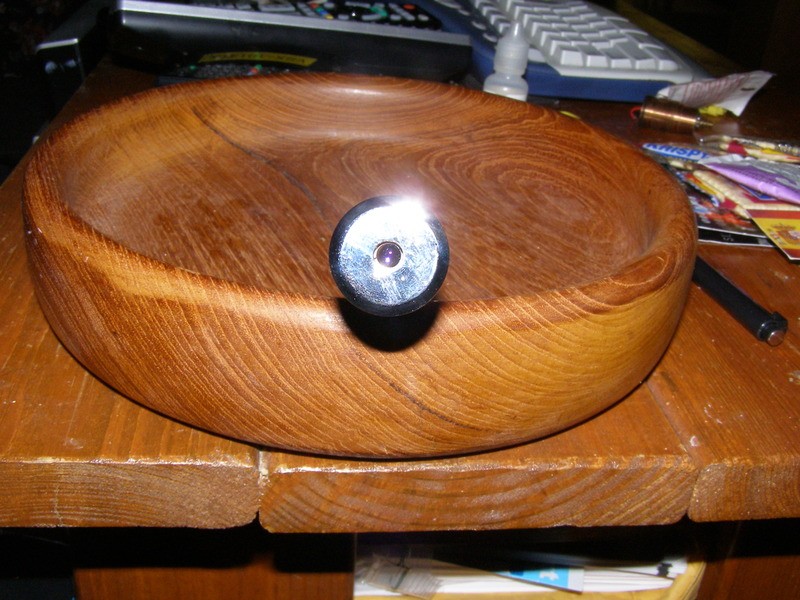 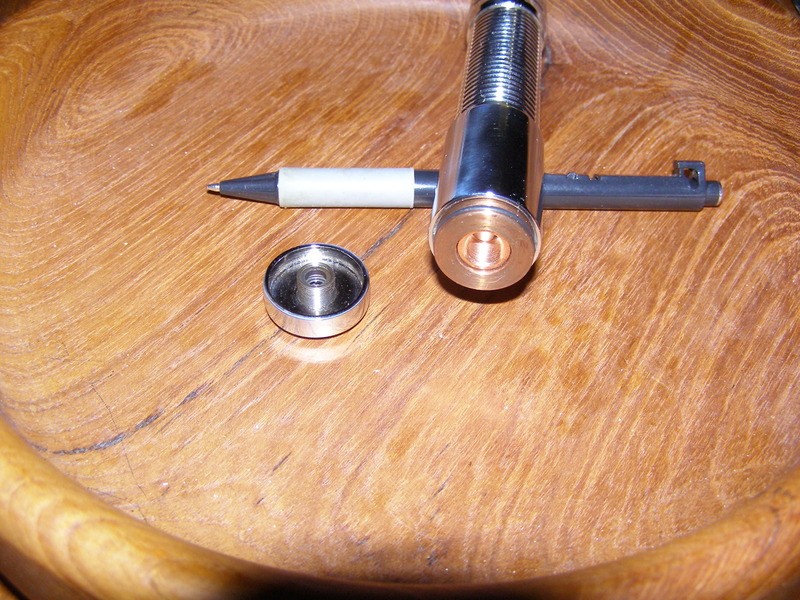 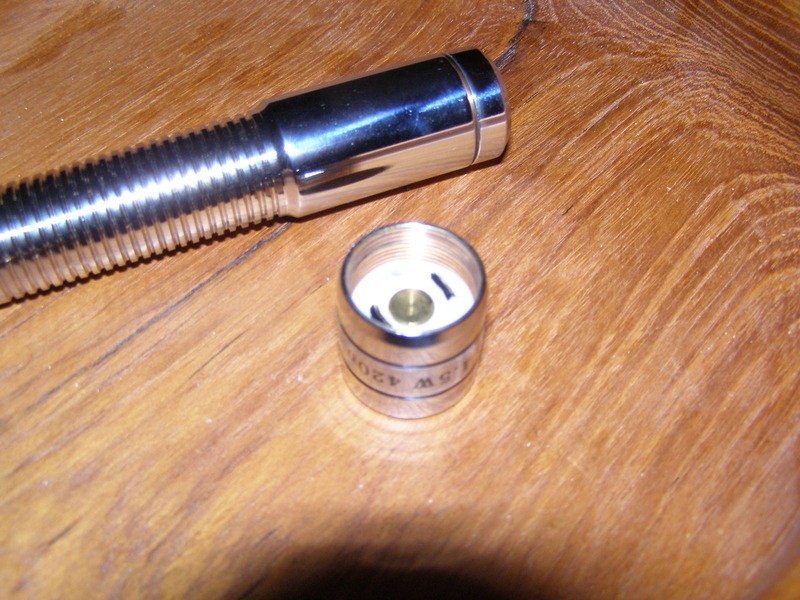 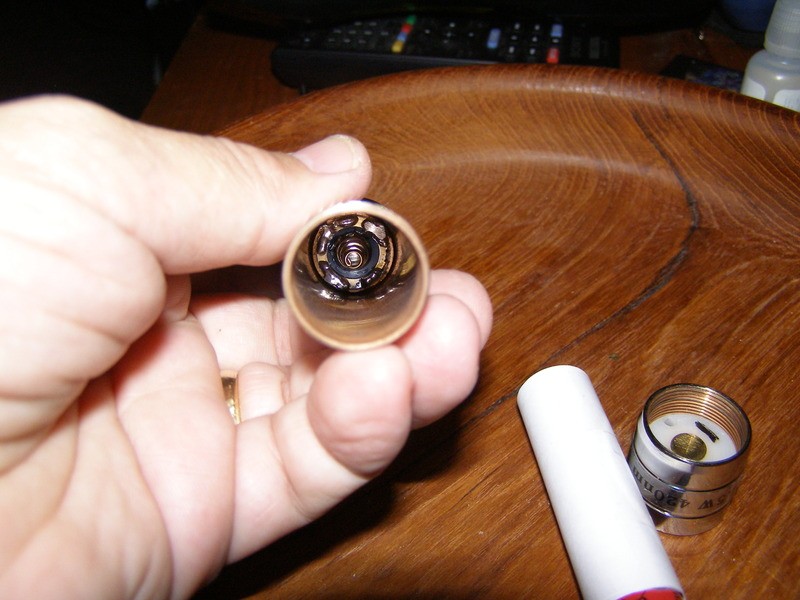 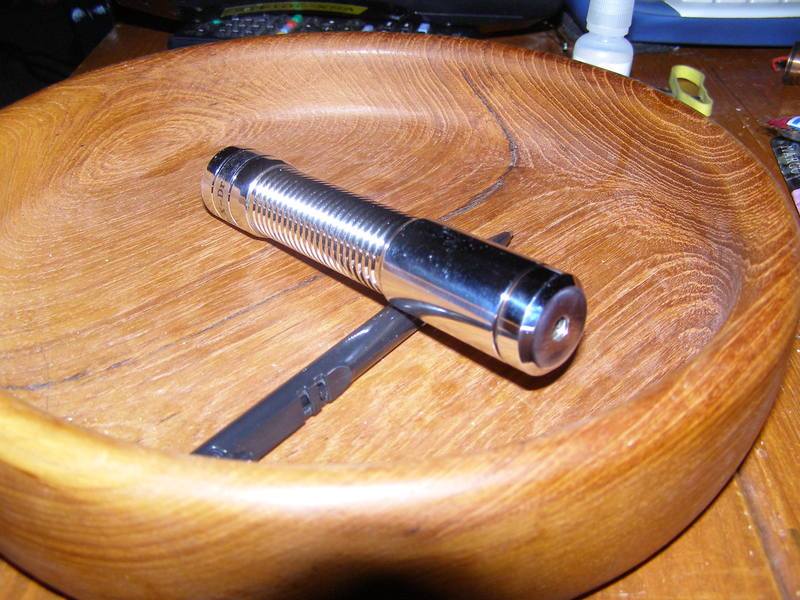 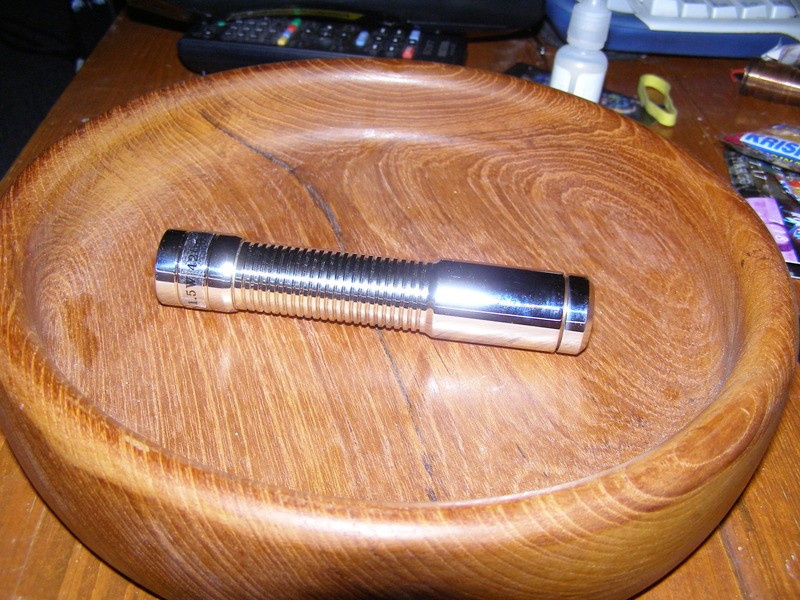 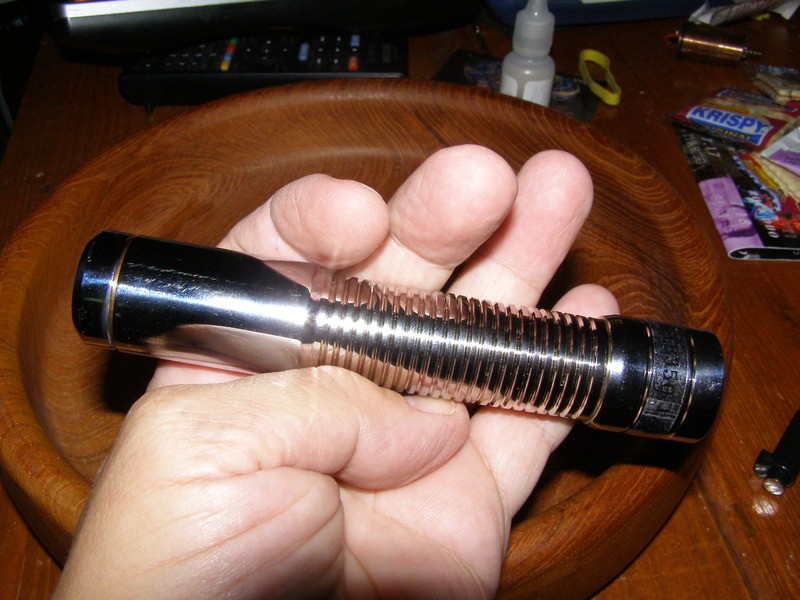 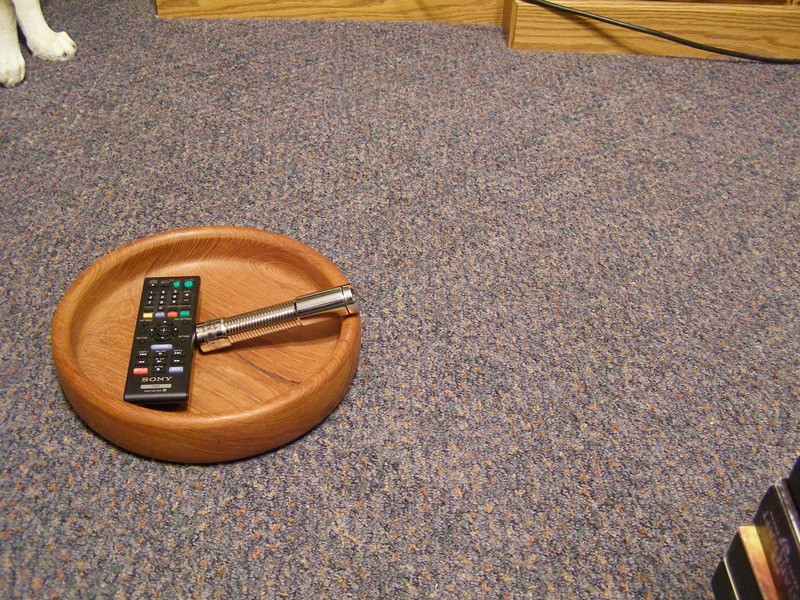 Pay no mind to how the camera I used picked up the brightness. It's pretty much stupid bright. The camera certainly adjusts to how bright it is because it's WAY brighter in person. This first pic is right beneath (4) 60W bulbs and you can see how the beam is very visible: 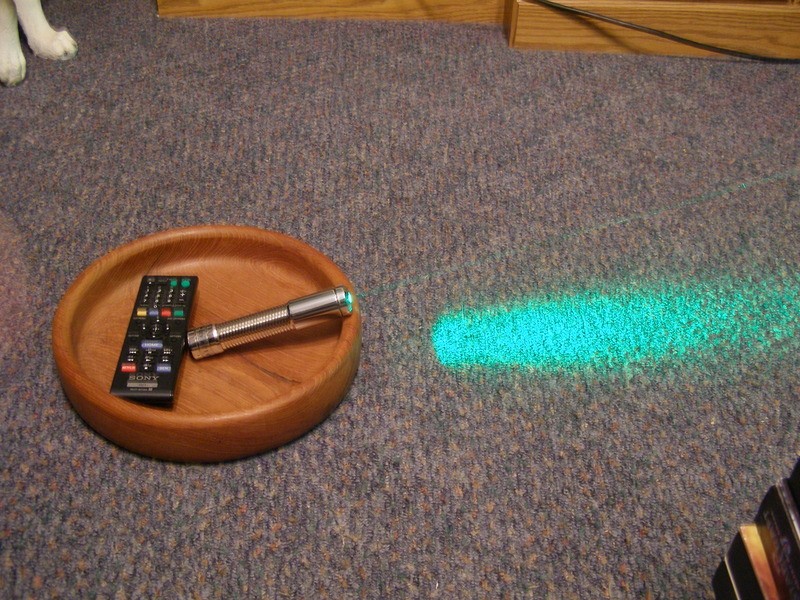 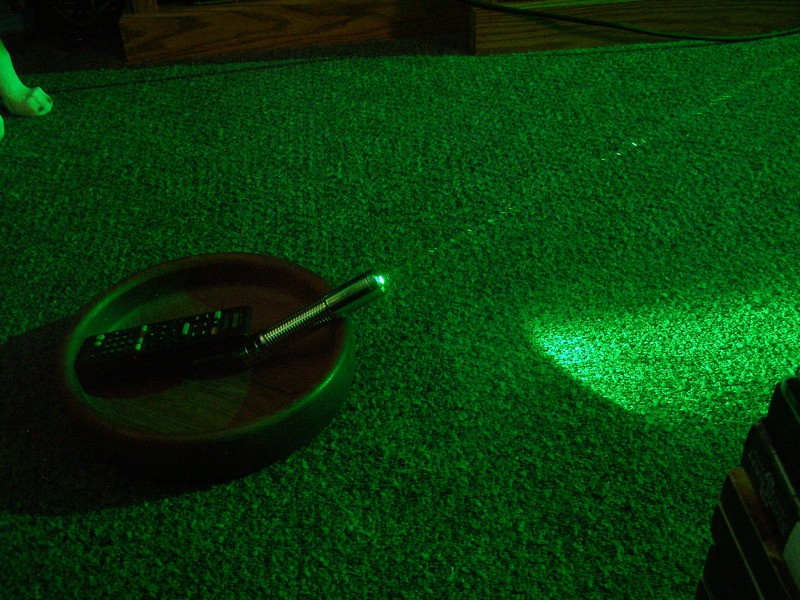 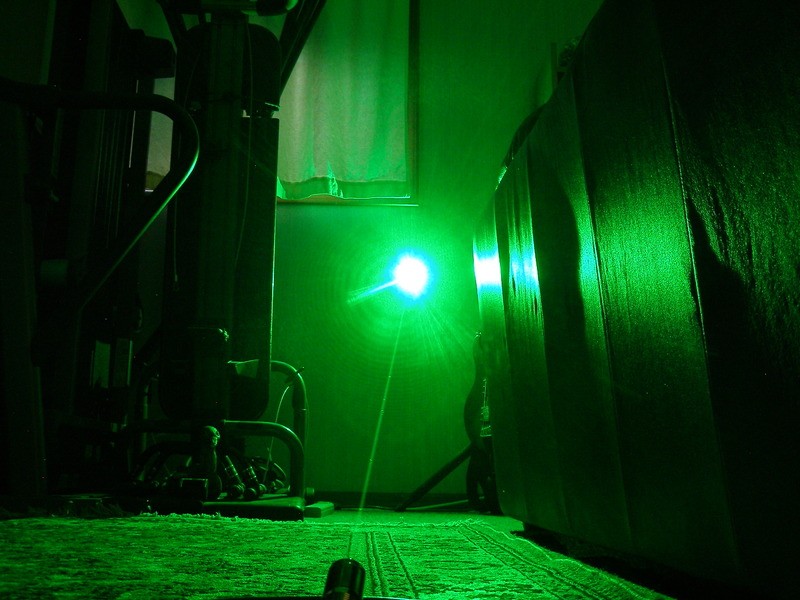 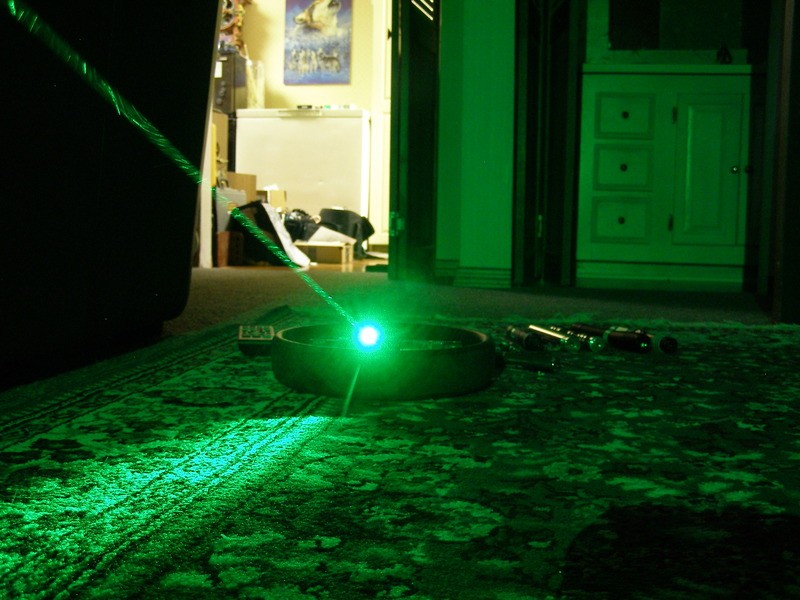 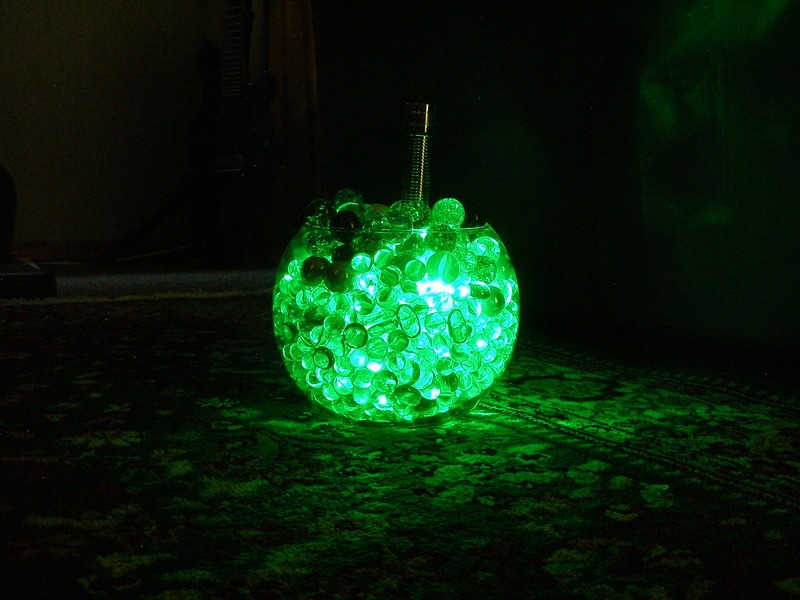 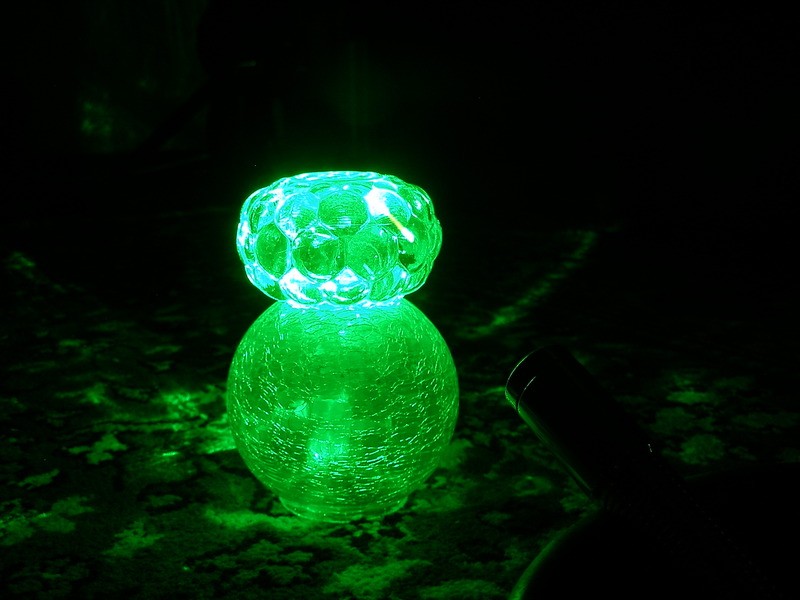 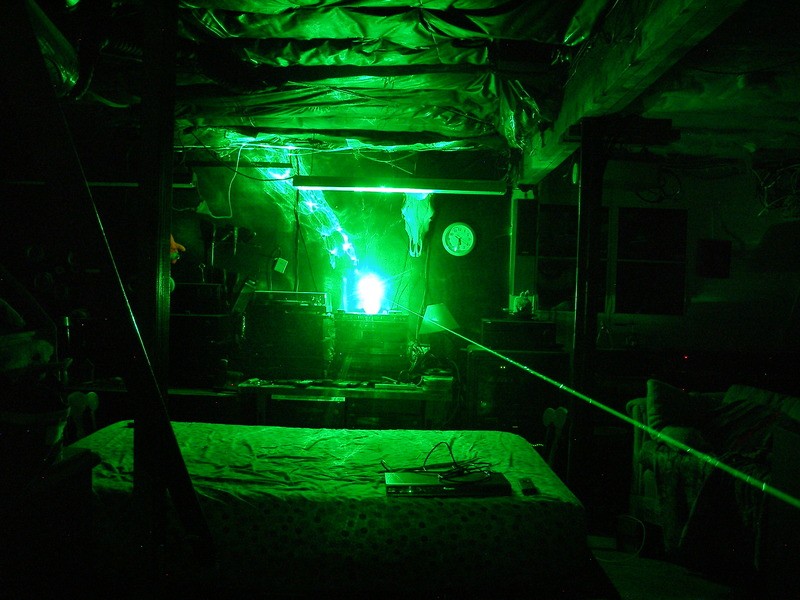 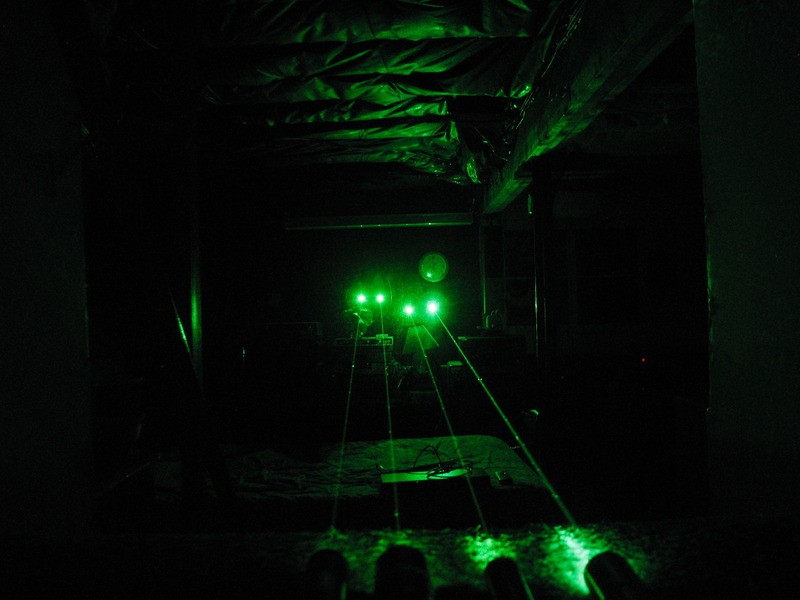 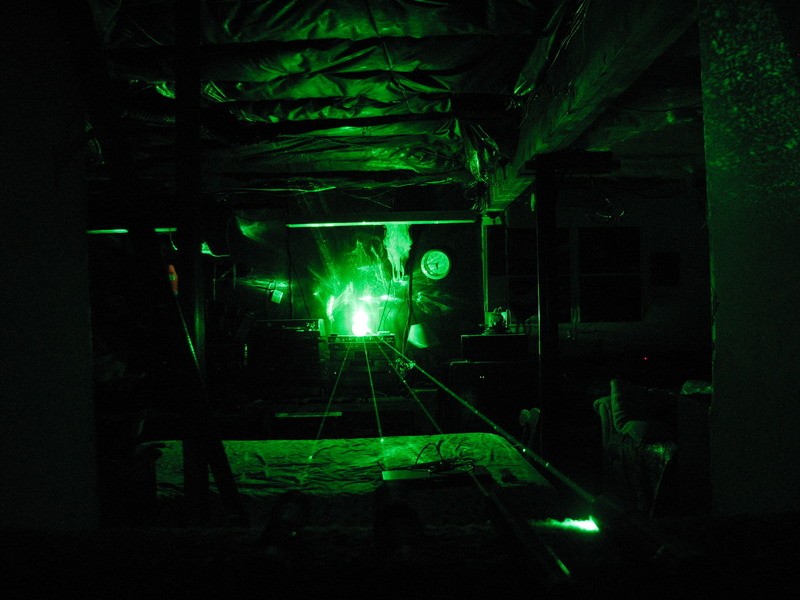 Pic with just the 520nm first: 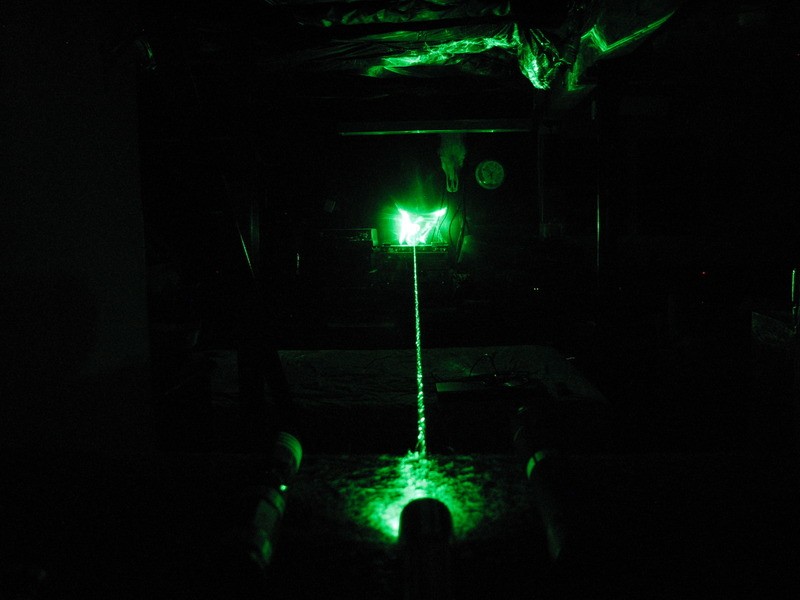 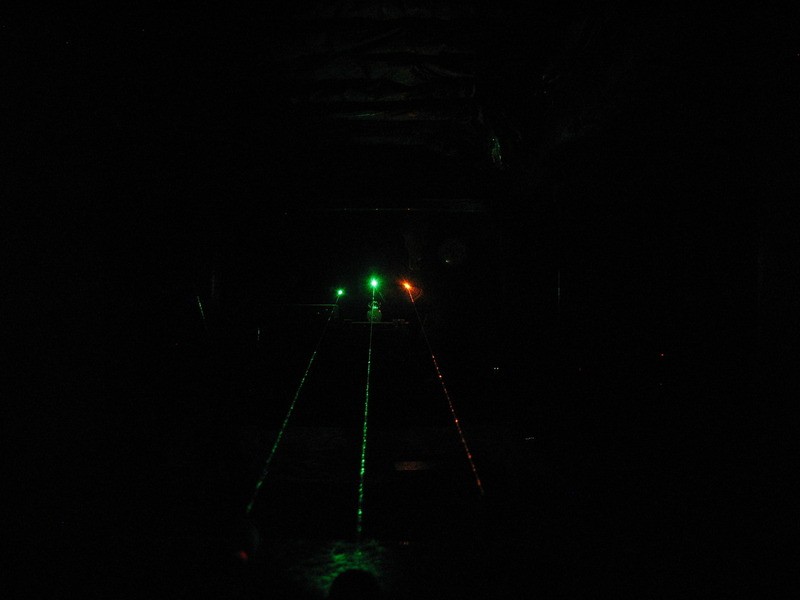 Dang, she purdy! I love that chrome finish. Never seen a bad looking host from sinner!

Thanks a bunch guys. Chroming that host changes the look dramatically in my opinion. Have to reiterate how well the host absorbs heat. You feel it start to warm VERY quickly. For the size the host is very heavy in the hand. Great substantial feel to it.
I also posted a few reds in the red section. Not a lot of detail but they show you can make some nice units on the cheap. Seems people aren't interested in lower powered units anymore though as there was hardly any notice given to it.
Last edited: Aug 27, 2015

Nice work Pete! How was it building something bigger than a pen? Good choice on the chrome finish too! +3

Nice build! I love the color and pictures. I have the same host and diode, but am yet to combine them. What kind of duty cycle are you getting with this?

I haven't tested for duty cycle yet as I rarely turn it on. In fact, the longest I've yet to run it at one time was for the pics today and I don't think it was on for more than 20 seconds at any time.
Hey, I've built a LOT of units that arent pens lol. In fact I have a bunch of other builds I haven't posted yet. Had a spurt of energy today so at least I was able to get this one done. Somehow managed to post the red ones too which is pretty amazing for me.
If you take a look at the reds here you will see the first cone head build anyone has put up to my knowledge. I also built a 1W A140 into one that I also haven't shown yet after having Ehg make me some heat-sinks which you can now get with the unit from Moh.
http://laserpointerforums.com/f50/few-inexpensive-red-builds-94811.html#post1376210
Last edited: Sep 9, 2015

Nice build Pete! The host fits the 520nm very well imo. Just wondering one thing, how is the chrome version compared to the standard copper one? I remember the copper one usually have a few small dents along with some small differences in color.

Thanks for posting it! Will rep as soon as I'm on my PC.

Don't see any flaws in my chromed one and I don't think it costs that much more for it to be chromed. I remember buying it when Sinner had a special sale on some units at Christmas.

Nice build pal I have built a Sinner Cypreus3 host with a NDB7875/2.4A SXD driver with ramp up. And I put his beam expander on the host also. He make some top shelf hosts.
I have a post in 445 or optics on my build , think I'll build another Sinner with the same exspander . My 465 build reads out to a 470.16nm in a 2-D cell Mag light mod that I built .
Awesome build Pman check my post out on the exspander 10x.

I'll look for it in a bit. Thanks

Beautiful laser!!!. I have the same host and diode but in polished copper and set to 2.2A (X Drive), very bright indeed. I love that host. I have a NDB7675 1.4W 462nm that I want to overdrive and I think the chrome host you have would be a perfect candidate. Enjoy your laser.:beer:
Last edited: Sep 3, 2015
You must log in or register to reply here.
Share:
Facebook Twitter Reddit Pinterest Tumblr WhatsApp Email Share Link