the striker series is bigger but is it very very big?

for you guys who also have lasers that also needs to rest after a minute, is this bothersome and annoying?
or is it something you get used to?

love to hear your opinions
thanks in advance

Whay do you need 3 at the same time--maybe get one and go from there.
It only depends on what you intend to do with it---is 100% up to you- if 1 minutes is good for your purpose than it is is fine.

You can always get both 1 Striker 470nm and 2 of the smaller ones for the other wavelengths and outputs.
is it big? The web site gives the dimensions---get a ruler or measuring tape and figure it out.

Why would it matter what anyone else thinks, wants, or does?

Something you might want to keep in mind is the Challenger2 you can carry most anywhere in your pocket, while the Striker is like a 2-D or C cell mag lite. Hard to carry in your pocket. I have both, they are top notch. You’ll be very happy. The duty cycle you do get use to. Best wishes and enjoy and be safe.
Last edited: Jun 13, 2018
G

Sanwu makes great quality lasers, you can't go wrong with either. But, if you want one that you can easily carry around with you, go with the challenger.
Q

is 4w and 5w 570nm a big difference?
because im leaning towards the challenger 2
G

Do you mean 470nm? and no not that much difference at that very high power level..
Q

Really leaning towards the Challenger 2
Because if you put the 3x beam expander on the striker series it will be massive overkill
Last edited: Jun 16, 2018
G

I’d recommend a beam expander on those higher power diodes as it’ll reduce the high divergence typical with them.
Last edited: Jun 15, 2018
Q

QiQi said:
the challenger 2 is fully made of copper so that should be a better heat conductor as well while the striker is made out of stainless steel
Click to expand...

:crackup: Nothng to say and just posting the above as a joke?

Do you even bother to read the Sanwu web site product descriptions?
From the Sanwu web site Striker page--
"Ultimate heat sinking -- Starting with a substantial 40mm copper heatsink within inside which surrounded by another huge aluminium heatsink, together the Striker maximizes the heat-dissipation-efficiency a handheld laser could possibly achieve without active cooling." "Duty Cycle - Unlimited"
From the Challenger II page : "Duty cycle 405nm, 470nm (60 seconds on & off), Other wavelengths (Unlimited)"
Last edited: Jun 17, 2018
Q 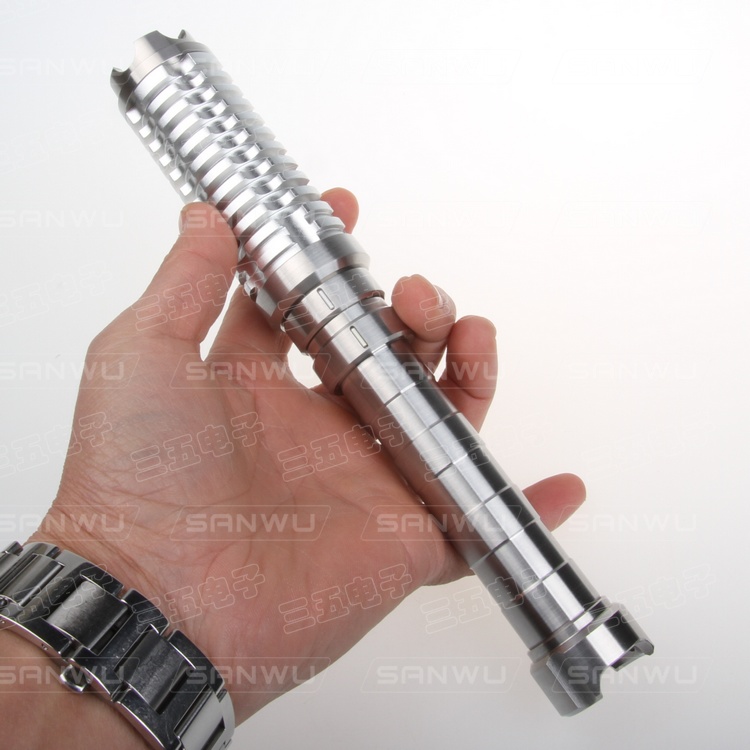 No because the voltage will simply not be enough to power it properly. In the smaller configuration you will need to use 2x16340 or 2x18350 which will come to the same size as 1x18650 but have the same voltage as 2x18650's. (Obviously capacity will be smaller than 2x18650s)

OMFG YES!
francis just confirmed that's possible to have the 1x18650 configuration if you want to
that means 2 x 18350 batteries will also work with the size of 1 x 18650 for no power loss
making the full power of the striker series into a somewhat handheld challenger 2 size


- THANK YOU SANWU FOR MAKING THE PERFECT LASER -

NarwhalZ said:
No because the voltage will simply not be enough to power it properly. In the smaller configuration you will need to use 2x16340 or 2x18350 which will come to the same size as 1x18650 but have the same voltage as 2x18650's. (Obviously capacity will be smaller than 2x18650s)

Glad you’re happy with sanwus selection, I guess they have a boost driver and a buck for their saber series.

But please combine some of your posts, you have double posted multiple times.

Make sure you get safety glasses as well.