This is a long page with at least 20 images on it; dial-up users please allow for plenty of load time.
Somebody set up us the bomb.

The Mini Purple Class Laser Beam Black Keychain is a violet-emitting, directly-injected laser. That is, it produces violet laser radiation directly, without the need for messy, fragile nonlinear crystals like those green laser pointers and the amberish-yellow and blue ones as well. It uses a a single AAA cell -- not two AAA cells like most other "pen-style" laser pointers and laser modules do.

It comes in a handsome brass body with a black finish and chrome colored bezel, tailcap, and spring-loaded "lobster claw" keychain attachment.

To get the laser to turn on, first be certain that there is an AAA cell installed. If there isn't, then install it (see directly below), and THEN you can go irradiate something.

To change the battery in this violet laser , unscrew the tailcap, and set it aside.

Tip the used AAA cell out of the barrel and into your hand, and dispose of, recycle, or recharge it as you see fit.

Insert a new AAA cell into the barrel, flat-end (-) negative first. This is the opposite of how batteries are installed in most flashlights, so please pay attention to polarity here.

This is a self-contained laser , and not a flashlight meant to be carried around, thrashed, trashed, and abused - so I won't abuse it in the name of science like I might abuse a flashlight.
Lasers are meant to be loved, not punished!!!

This is a directly-injected laser, who's active components are the inverter circuit, the laser diode, and the collimating lens. So it should withstand accidents better than a DPSS (diode pumped solid state) laser - the type of laser assembly found in yellow (593.5nm), green (532nm) and blue (473nm) laser pointers. These lasers have several additional components (crystals, filters, etc.) in the optical train, and you can knock them out of alignment by doing little more than looking at them the wrong way. And if any of these components are knocked out of whack, you'll no longer get your yellow, green, or blue laser beam.

Though you still do not want to intentionally drop your violet-emitting laser because it's a precision optical instrument.

Although there is a label on the unit advertising its output power as "(30-50)mW", there is no CDRH classification shown; eg. it does not read "Class IIIb" as it should.
This is rather expected of a product of non-US origin; sometimes known as the "Hoo Phlung Pu" brand. 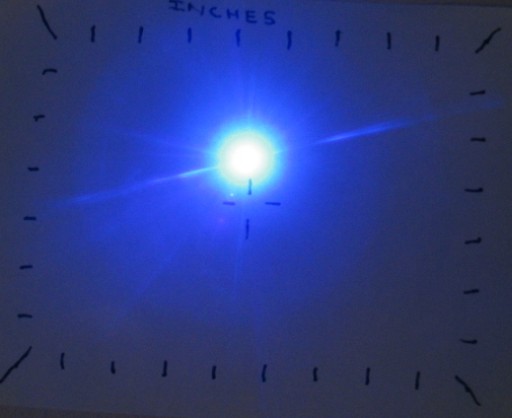 Beam photograph of this laser on the test target at 12".
Beam image bloomed ***SIGNIFICANTLY***.
I deliberately photographed this in somewhat low daylight to help reduce image blooming!!!

That white & blue color does not really exist; the spot appears to be a very deep royal purple to the eye.
Digital cameras have a tough time at these wavelengths.

And yes, I know that the colors purple and violet are two different critters, but the phrase "royal violet" would not make very much sense; however, most everybody knows what "royal purple" looks like.

Purple is a mixture of red & blue; violet is a spectral color, encompassing wavelengths of ~390nm to ~410nm. 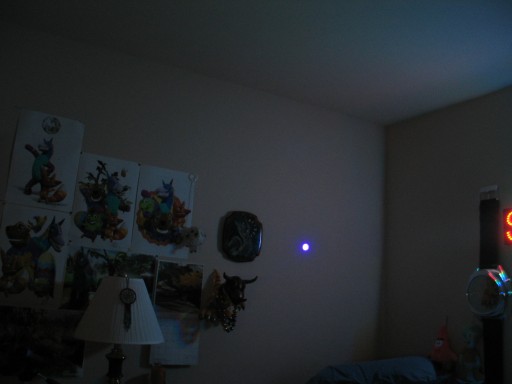 Beam photograph on a wall at ~10'.
Again, that white & blue color does not really exist.

Those colored graphics toward the left are my "Viva Piñata" posters, and that clock on the right that looks like a gigantic wristwatch is my Infinity Optics Clock.
You may also be able to see one of my SpongeBob SquarePants plush (Squidward Tentacles) and a Digimon plush (Greymon). Normally, a Patrick Star plush (from SpongeBob) would be hanging next to Squidward, but he was down here at the spectrometer for a test of his own.

Spectrographic analysis of the Blu-ray laser diode in this product.
Wavelength appears to be ~405nm, which is within specification for the type of laser diode used in this laser.

Same as above; but spectrometer's response narrowed to a band between 390nm and 410nm.
This shows that the wavelength is 401.10nm.

Spectrographic analysis of the fluorescence of a uranated* glass marble when irradiated with this laser.

Spectrographic analysis of fluorescence of the 2009 NIA Commemorative Insulator in uranated* glass when irradiated with this laser.

*"Uranated" - infused with an oxide anion of uranium, *NOT* piddled (peed) on.

Commonly referred to as "Vaseline glass" because it has
a distinct pale yellow-green color when not being irradiated.

These charts show the somewhat ovoid beam profile;
this is consistent with directly-injected diode lasers.

Images made using the ProMetric System by Radiant Imaging.

I have decided to rate this wonderful little laser five stars!!!


CONS:
Just the usual suspects for laser modules/pointers - nothing that affects rating

BTTT: Added a spectrographic analysis.
B

is it as bright with NiMH than with fresh alkaline ?
i have bought this one and this is not the case:
50mw Mini Blue Beam Laser Pointer With Keychain

Took over 6 months for anyone to comment?!
Love highly detailed reviews. Read many reviews on your site, didn't know you had an account here.

BKarim said:
is it as bright with NiMH than with fresh alkaline ?
i have bought this one and this is not the case:
50mw Mini Blue Beam Laser Pointer With Keychain
Click to expand...

Generally nimh will not provide the same performance as fresh alkaline batteries, so the answer is no.
B

"Generally nimh will not provide the same performance"

even with an good driver (that seems not to be here) ?

If you're looking at a laser with a good driver.. it won't be running off of AAA's

For the one you ordered, you can try tossing a 10440... may kill it, or may not. I usually do with all the cheaper greens, but it is a risk.

Besides... we're assuming there is actually a driver, there isn't always..
B

i just tried with two NiMH, and the host is hot now...
what's getting hot: diode or driver ?

Could be three things.. host, diode, batteries themselves.

How long was the laser on for?

Generally those shouldn't be run for more than a minute at a time MAX.
B