After moving a lot of lasers out of my house to the exhibit in Tempe, I had to rearrange everything else to accommodate the voids and disruption. I finally found a display cabinet to replace one taken away, and have filled it with some cool old plasma tubes and a few heads. The bottom shelf holds Spectra-Physics models 112 (long) and 115 rf-excited He-Ne heads and a TRG model 513 "Biolaser" ruby head (for use on a microscope), all from around 1964. Beatlemania lasers! To the right is a dye laser head made by Chromatix (an early spin-off from Spectra-Physics), and also a Metrologic He-Ne tube from 1969.

The center shelf (l-r) are a Bausch & Lomb He-Ne, an RCA argon ion tube in resonator, an RCA He-Cd tube in handling cradle, an American Optical He-Ne on mounting brackets and with the covers removed, and a He-Ne laser simulator made for a Bell Labs communications demonstration kit. These are all from the late 1960s or very early '70s.

Top shelf in the case is a Britt argon ion tube from the '80s at the rear, and an unused tube from a late-'60s Korad KG-22 flowing gas CO2 laser in front of that. In front on the left is an unused Spectra-Physics model 950 tunable sealed CO2 tube I assembled and filled during my first job with lasers around 1982. To the right is an unused tube for a Spectra-Physics model 164 argon laser.

The old Oriel rail on top of the cabinet holds He-Ne heads from the late-'60s, made (l-r) by Perkin-Elmer, Quantum Physics, Metrologic, and Edmund Scientific (actually made by Metrologic). 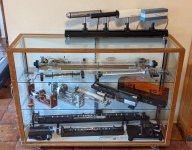 I've followed your posts here over the years Anthony, and am really happy to know of someone who's built all those lasers. If you're interested, I have a bunch of sealed CO2 tubes like those below, from the remains of the line made since the very early '70s by Sylvania, GTE/Sylvania, Spectra-Physics, and Line Lite Laser. I have the processing recipe for both long and short tubes, and even have the fixture used to hold the tubes for potting the rubber support between them. Be great for them to go to someone to finish or modify into something creative. I knew the glassblowers who made them and know they'd like to see them used. Some of them are busted trash I just can't throw away. 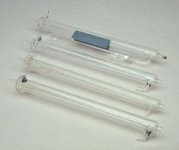 Here's a pic of the filling station around 1983, at the transition from S-P to LLL. 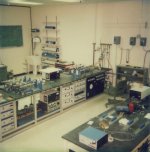