conceptcar3 said:
True “republicans” disavow morons like Brad rafensperger you total buffoon. He is not a republican, he is on your side! Lol think mcfly. Do you have any ability to think critically and for yourself or do you just eat up what cnn spoon feeds you? There are tons of “republicans” who are really just as far left as you, Biden, and Obama. They are also complete morons. Anyone can call themselves a republican. John McCain and the recently deceased Colin Powell also called themselves republicans, but they were the same deep state globalist shills you Obama and Biden are. They are not in line with the principles real republicans stand for.
Click to expand...

I am not a Brad Raffespereger fan as he has helped to disenfranchise voters in Georgia that don't vote Republican. His ONLY saving grace was that he did look into the 2020 election and found absolutely no massive fraud that would have overturned the results there. I get my news from my subscriptions to the New York Times and the Washington Post, so not CNN. But, CNN has won many followers and are a reputable news outlet. John McCain was a Republican candidate for president and Trump's railing on him was the main reason he lost Arizona. Colin Powell was a remarkable Republican spokesperson who was admired by people on both sides of the aisle. He didn't care for Trump either, but Trump was a narcissist who lied constantly while in and out of office.

Trump had to give 4 and 1/2 hours of under oath testimony about the suit filed against him back in 2015 about people who were protesting his candidacy and were assaulted outside of his Trump tower by his own security staff. It is a shame it took this long to get this all started, but expect him to be under oath again soon.

Yesterday the House 1/6 committee voted 9 to 0 to hold Steve Bannon in contempt of Congress. The vote will now go to the full House to vote on. Bannon wasn't even a part of the Trump administration when the insurrection on the Capital happened on 1/6/21. Trump has no presidential privilege to invoke as that can only be asserted by the sitting president, so Trump no longer has this privilege.

Liz Cheney had quite harsh words for Bannon and Trump yesterday. She said Donald Trump seems to have been involved in the insurrection personally. It will then go to the DOJ to hold Bannon in contempt.

lol as you said, bannon wasn’t even a part of the trump administration when the capitol protest happened. (It was not an insurrection, you have diarrhea of the mouth and lie continuously)

Certainly some interesting priorities at the State Department these days. 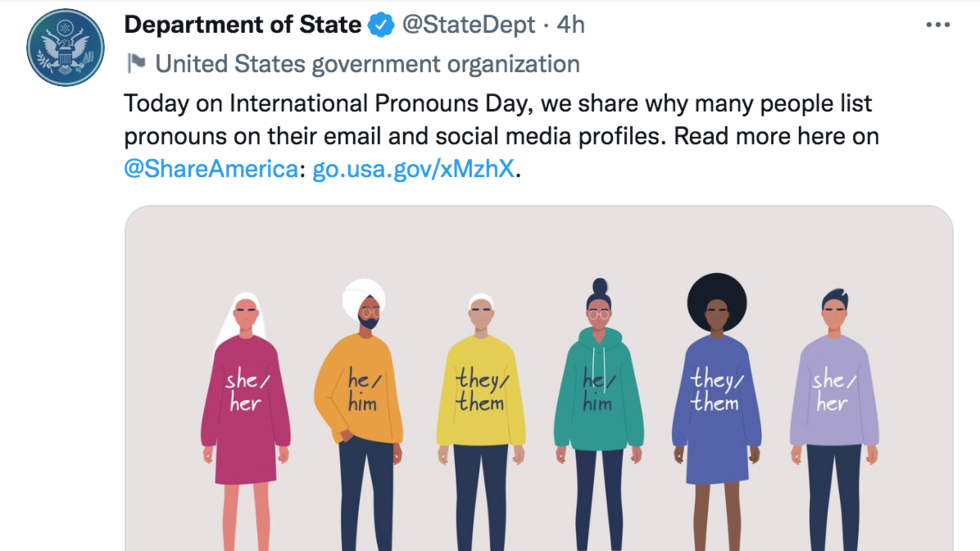 The US State Department has left critics wondering about its priorities after its Twitter account took time to educate people on the use of preferred pronouns while marking International Pronouns Day.


Some great responses though.

The Biden admin. has been ordered by the court to reinstate Trumps successful Remain in Mexico policy.
Biden has said they will do so in November.......
Meanwhile Biden is using private buses and aircraft to smuggle illegal immigrants into Americas heartland in the middle of the night.
As if this criminal activity wasn't bad enough the Biden admin. is abusing authority to persecute it's political opposition.

The Biden admin. has been an abject failure and is working hard to be a criminal admin. as well.

conceptcar3 said:
lol as you said, bannon wasn’t even a part of the trump administration when the capitol protest happened. (It was not an insurrection, you have diarrhea of the mouth and lie continuously)
Click to expand...

Bannon did say on his blog the day before the January insurrection that there was going to be hell the next day at the Capital and people should be ready to fight. He doesn't have the presidential privilege that he claims to have, but he certainly has some criminal issues coming his way. I guess we'll see once the House turns this over to the DOJ.

It's funny that some seem to think Biden has done illegal stuff as Trump certainly did that during his short tenure.

1/6 was just another mostly peaceful protest only without the widespread looting and burning, nobody is responsible for a few protesters who went too far except those protesters, yet the dems will try to make political hay out of anything because their inane progressive liberal policy is a failure.
C

Couldn’t have said it better. No one died that day except a protestor. During an insurrection, many people die. Calling it an insurrection is an insult to real insurrections and makes all democrats (including Paul) look like total dip-craps.

Pronouns day? You know something, maybe getting nuked by china will wake everyone up from this delusional state america is in
C

I truly hope that doesn’t happen. But seems like it could be headed to that.

China doesn't want to nuke the US they want to own the US and having the ability to guarantee mutually assured destruction is just part of the puzzle......bio warfare is another and we have been relying on China for far too much, the chips in those hyper-sonic missiles are US designed but made in Taiwan, that's how China has them.

We rely on China for far too much and Biden is doing nothing to protect America, quite the opposite, Biden has to distance himself from the progressive liberal extremist and start working for America, not pandering to the idealistic, unrealistic, moronic progressive agenda.
B

China is a mess. It's the largest country in the world, in terms of both population and international trade. It's also the country with the highest numeber of executions, and the only nations in the world where a financial crime can be punished by the government with the death penalty. So many people are executed in China, that the government has a mobile death van that drives door to door. Foreign relations are an absolute mess. Numerous sovereign nations don't even recognize the Chinese government as legitimate, and it's only been since 1979 that the USA did. China has ongoing border disputes with India, Japan, Vietnam, Taiwan (which doesn't even recognize China) and Bhutan (also doesn't recognize China as legit). The autonomy of the regions of Tibet, Inner Mongolia, and Xinjiang is hotly disputed. In fact, to combat the dissent among minorities in Xinjiang, millions of people were arrested based on their ethnic makeup or just their appearance ("your beard is too long, therefore you are a terrorist" was literally one example), and placed into indefinite spans of custody (life sentence) without any formal legal proceedings (i.e. the government does not like your parents or the way you look = life in prison without trial). Yet, China continues to be the USA's biggest trading partner.

Milosevic, Noreiga, Pol Pot, and many of the Congolese and Rwandan people involved in genocide have been tried and convicted, but we all know that Xi will never face any international trial for the genocide of the Uyghurs.

You obviously haven't looked at the massive violence that took place at the Capital on 1/6 and the many people who have already been charged with crimes there. I watched a tiny Fox News video where they claimed it was just a mild protest, but that was not the vast videos of violence that took place there. Even Republicans said that it was an insurrection while it was taking place and the day afterwards. You can try to spin it anyway you want, but it was what it was.

This is the most insane thing you've insane here. No one wants anyone to start nuking anywhere in the world.

paul1598419 said:
This is the most insane thing you've insane here. No one wants anyone to start nuking anywhere in the world.
Click to expand...

This is the most insane thing I've insane here? lol

That coming from a guy who praises unborn children killings.

Actually, I'm in favor of women being able to choose whether or not to keep a pregnancy. That is totally different from what you have claimed I've said here. Women still have a Constitutional right to safe and protected abortions and have had this right for nearly 50 years.
You must log in or register to reply here.
Share:
Facebook Twitter Reddit Pinterest Tumblr WhatsApp Email Share Link