Give me a break! Trump had both houses of Congress before the 2018 elections. Why couldn't he get it done then? That was two solid years of wall to wall republicans. Now, it is Democrats that are to blame? Nonsense! Democrats won't do what Trump wants them to do....that is the logjam. He had plenty of time to push his agenda before 2019. I don't know of any Democrats that believe the misdemeanor offense of crossing the border is a reason to separate children from their guardians.
Last edited: Dec 13, 2019

paul1598419 said:
Give me a break! Trump had both houses of Congress before the 2018 elections. Why couldn't he get it done then? That was two solid years of wall to wall republicans. Now, it is Democrats that are to blame? Nonsense! Democrats won't do what Trump wants them to do....that is the logjam. He had plenty of time to push his agenda before 2019. I don't know of any Democrats that believe the misdemeanor offense of crossing the border is a reason to separate children from their guardians.
Click to expand...

Everything Trump tried to do was blocked or challenged.
The Republicans had a majority in both the senate and the house until 2018 but a simple majority isn't enough to "control" either house. The dems refused to support any measures that had been proposed and the Republicans didn't have a large enough majority to overcome the dems obstruction.

Why didn't Obama fix the problem in 8 long years ?

I think it's always been about money and what it will cost, so doing the same that doesn't work is how it shakes out, but this kids in cages bullshit is just dirty politics, nobody has given a dam until there's something to gained from it, democrats didn't care enough to sign the boarder deal giving dreamers a 10 year pathway to citizenship, NO they want votes now or screw em, it's all bs, kids were not in cages just chain link fence used to make holding areas and Obama did the same, just not zero tolerance, it's dishonest political BS just like your impeachment that will fail.

Trump ran on the message that immigrants are bad and are all drug smugglers and criminals. It has been what he feels propelled him to power. Obama came into office at a time when the economy had crashed and he also wanted to take on health care. That was an issue every Democratic president since Truman had tried to solve. He was focused on those two things as he took office. He got the ACA passed, something no one else had been able to accomplish and after that he had republicans in majorities opposing him. But, even though there are always people in both parties that want to impeach any president they didn't vote for, he never came anywhere near what Trump will get by next week. Trump has been a divisive president from the beginning of his campaign and has never changed even a little during his time in office. Even when we have tragedies, he uses them to tout himself rather than trying to be the consoler in chief. He just brings out the worst in everyone. There is a best selling book out, "Everything Trump Touches Dies". That pretty much says it all.

Obama was the deporter in chief and he put kids into those same chain link fence enclosures.
The Trump impeachment is a sad sad joke only it's not even funny, just pittitiful and it will fail, Trump will not be removed.

One of the things I didn't like about Obama was the fact that he did deport many illegal immigrants, but he never made them wait in other countries while awaiting their court dates. That is all on Trump. While I'm talking about Trump, he also cheated on his many wives including his current one with Stormy Daniels whom he paid off during and after his campaign, he borrowed $1 billion to buy up gambling casinos in Atlantic City in the 1990s, but was defaulting on those so he opened an IPO, initial public offering, to sell stock in those failing ventures sticking many people with his debts and saving himself at their expense from poverty. He is and always has been a fraud and a failure. It is not surprising that he continues this in office to bring foreign interference into our next election, the reason he is being impeached now. His approval rating has never been above 45% and often has been lower and 94% of the US has said he thinks of himself over the country and 93% believe he wanted Ukraine to advance his political objectives. This is while his approval rating still hovers at 42%. Even when Clinton was impeached by republicans only 33% of voters were ever in favor of it while 52% have been in favor of impeaching this president. That is why republicans paid a price for Clinton that Democrats won't in 2020.

The majority of people polled now oppose impeachment, looks like your dirty dems have lost ground.

Comey is not off the hook and looks like Comey was wrong and then some.

That's funny. A new Fox news poll puts impeachment approval at 50% and opposition at 41%. In fact, that same poll sates a large majority believe the president abused the power of his office.....even higher than the 50% in favor of impeachment. That's your news organization, isn't it?
Last edited: Dec 16, 2019

WASHINGTON – As a historic week begins, a USA TODAY/Suffolk University Poll finds Americans closely divided on whether the House of Representatives should impeach President Trump. A narrow majority opposes a conviction by the Senate that would remove him from office.
In the wake of combative impeachment hearings, those surveyed oppose by 51%-45% a Senate vote to convict Trump on charges of abuse of power and obstruction of Congress. Though those results may be sobering – almost half of Americans support removing the president from office – they are a bit better for him than the survey's findings in October, when Americans split 47%-46%. 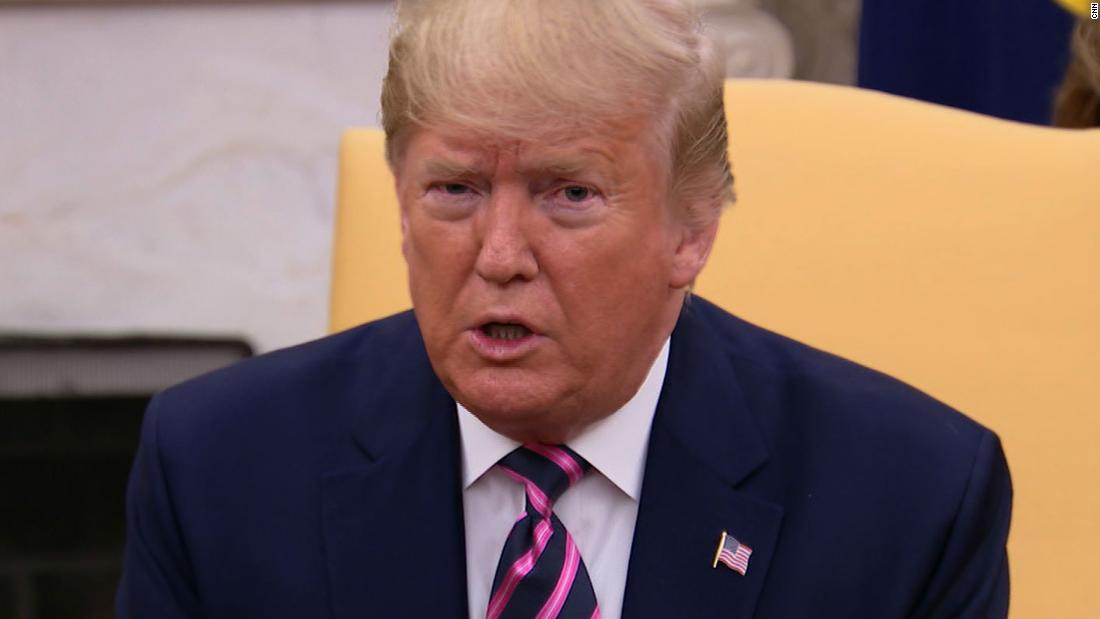 Half of voters support impeaching Trump and removing him from office, new poll finds

Half of American voters want President Donald Trump impeached and removed from office, according to a poll released Sunday from Fox News that was taken as House Democrats unveiled two articles of impeachment against the President.

cnn is fake news, actually they are flat out liars, still cnn says nothing's changed and USA TODAY says Trump has improved so either way all your efforts to sway the masses have worse than failed.

Bob Barr is going to drop the ax and some heads are going to roll, some rat fink lying heads.......and Trump will not be removed from office, this impeachment nonsense is a pathetic fail just like the Mueller contort, they tried to fix the election for Hillary, Hillary is the one who cheated and Obama used the intelligence agencies to help her cheat, they spied on Trump and the Steel dossier that Hillary paid for from RUSSIA was pivotal in getting a warrant to spy on Trump............and they accused Trump of conspiring with Russia, that's what Hillary did. There are DOJ investigations afoot, this is not over, not even close.


https://www.newsweek.com/fox-news-p...mpeaching-donald-trump-removed-office-1477340
None of your arguments are born out by your Fox News interview with Comey. Carter Page was never charge with a crime and the FISA applications have been a significant issue with Democrats for some time. The gist of the report by the IG stated that the FBI investigation was opened, predicated, on solid evidence and there are at least five Trump campaign and office holders that have been convicted of felonies now.

Don't try to make up your own facts, the people around trump were convicted of non election interference crimes mostly old skellingtons scared out of their closets, you try to conflate that but it's not anything to do with Russian interference, also the IG report is not as simple as you attempt to convey, there's a lot that's said and what's not said doesn't mean it didn't happen but you try to run with that too, there's enough there for an investigation in addition to the investigation by John Durham.......what has been done to Donald Trump is criminal and the real election interference was committed by Obama and Hillary with the help of the FBI.

It's funny how everyone around Trump has been picked over with a fine tooth comb but people like Maxine Walters who sure has a lot of money from somewhere don't get the scrutiny they deserve, but there will be more to come and you were wrong about the Steel dossier, it was a major part of getting the warrant to spy and renewing it when they knew it was fake, the Mueller investigation was an excuse to try and tear down Trump ( FAILED ) and everyone around him and I know many democrats could not stand that level of scrutiny, hell Hillary was slap let off the hook so don't act like the tearing down of some of the people around Trump means anything, it's just politics, dirty politics, but there will be more to come.

Fact is Mueller failed and now Schiff will fail and Trump will be reelected because Biden is a fudd and Warren is a dudd.

p.s. If what's been done to Trump had been done to Obama you would have been screaming RACISM RACISM for the last 3 years non stop.
Last edited: Dec 16, 2019

I suppose Cohen, Trump's personal attorney and fixer, isn't doing three years in prison for paying off Stormy Daniels on the orders of Donald in order to keep it secret during and after the election. You only pick a couple of people who are convicted of crimes done before they were in Trump's campaign and as office holders. The rest were convicted for crimes committed while working for Trump. If he weren't president right now he would be at least under indictment if not convicted too. The fact of the matter is Trump has ALWAYS been crooked and he has continued this in the White House. The Mueller report laid out at least five instances where he either lied or attempted to hinder the FBI's investigation. That alone is a felony. I fully expect Trump will be impeached this week. That is a stain on his record he is totally obsessing about, tweeting as many as 134 tweets about it in one day. Normal people would never do that. It is all about trying to defend the indefensible. He is nutty as a fruit cake. The guy thinks he can treat the office like a "reality" TV show.

Hillary was 100 times worse, hell the Clintons have a trail of dead associates back through Arkansas, Hillary tore down other women that her husband sexually assaulted, so what if Trump paid Stormy to make a movie, Billy boy was a monster and Hillary was the female Hitler, THANK GOD FOR DONALD TRUMP !!!

Trump has done a lot of good, who cares if he screwed a whore, I don't and I never gave a dam about BillyBoys blow job, I didn't like a lot of other things but his play time with Monica I thought was something we didn't need to hear about, but when you hate someone then any little thing is a big deal.....to you......in this case......but not the other....when it's your guy it's different......right.....hypocrite much
Last edited: Dec 16, 2019
You must log in or register to reply here.
Share:
Facebook Twitter Reddit Pinterest Tumblr WhatsApp Email Link