A self-described "hardcore leftist" was arrested Friday for allegedly issuing a call to arms online to recruit like-minded individuals to join him in violently confronting pro-Trump supporters expected to gather at the Florida state Capitol in Tallahassee on Sunday, just days before the... 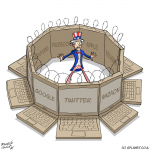 The vast majority of rioters in the Capital on 1/6/21 were MAGA supporters. Just because Fox News states that one left leaning person called for a protest in Florida doesn't mean that it would be anything like what was seen 12 days ago in the Capital. Trump's approval rating is at an all time low of just 34%. In less than two days we can see real leadership for a change in Washington. Trump's highest approval rating during his time in office was just 49%, not even half the country. Good riddance Donald.

I see a dangerous trend of labeling patriots and conservatives with derogatory terminology, this is not the path to healing in the wake of a stolen election.

Already just the talk of Bidens liberal policy is having an ill effect.

Hoping for a huge turn around soon. Paul, if just one MAGA person had entered the capitol like that, they would be responsible, no doubt. The ANTIFA and BLMers were breaking the window and leading the way in, instigators, but of course, they should have done that, right?

RedCowboy said:
Already just the talk of Bidens liberal policy is having an ill effect.

Sheer madness. People that have no respect for the immigration laws of their target would-be host country, will have no respect for its other laws and only cause more trouble. Understanding this shouldn't even be a matter of political position. It's too basic for that. The only reason I can think of why the extreme left supports this is because they want the trouble.

Wakrah said:
Hoping for a huge turn around soon. Paul, if just one MAGA person had entered the capitol like that, they would be responsible, no doubt. The ANTIFA and BLMers were breaking the window and leading the way in, instigators, but of course, they should have done that, right?
Click to expand...

The numbers of MAGA flags were greater than the numbers of American flags among the rioters in the Capital on January 6th. Hell, next to that were the Confederate Battle flags, making White Supremacists the next greatest number of rioters there. I doubt a single Antifa or BLM person was there, but Trump supporters have a narrative to keep up. The lies about a stolen election were being promoted by Trump back in September, but he lost this election by so many voters that to believe that strains credulity. The funny thing about all this is Trump is trying to fly out of town tomorrow and wants to have a celebration of his presidency at the airport at 8:00 A.M., but it doesn't seem like he can get many RSVPs. Many people who have been denouncing Trump for years have gotten emails to come and bring 5 people with them, but it doesn't seem like anyone is gong to show up past the staff members they will get to fill their ranks.

" We imposed historic and monumental tariffs on China, made a great new deal with China, but before the ink was dry we got hit with the China virus. "


I feel great sorrow for our country and resolve to fight along with millions of fellow patriots to preserve our Freedom over these next 4 years, I honestly feel like my dog has died, a loyal protector who loved us will be replaced by a lifelong beltway insider, a senile child sniffing pedophile puppet and his swarm of party co-conspirators will attack us, but we will only push back harder.

Freedom will ultimately prevail for we are Americans but regrettably we will have to endure a time of learning for young voters who have been brainwashed by liberal educators who have exploited fears and used race baiting to spin a false narrative, most of us know President Trump loves all Americans regardless of color/race/gender/age but our young voters have been deceived and our election was stolen by way of a widespread media hate campaign and outright fraud.

The struggle ahead may be long but have faith for the fire of Freedom burns in every American heart and it will only be a matter of time until our next renaissance, a rebirth of American pride and dignity will again be felt by all Americans of all color/race/gender/age but not until we endure these next 4 years, it's a shame that the liars and manipulators have used race baiting and hate against us to such effect, it's a lack of religion in so many young Americans lives that has allowed the deception to prevail.

The vast majority of Trump supporters are good people who love their children and don't have a racist bone in their bodies, the slander against 74,000,000 Americans is appalling and it won't bring Americans closer together, if we are to heal as a nation we must ignore the real racist who use race baiting and hate to deceive for political gain.
Last edited: Jan 20, 2021

The tariffs on China have and will backfire on American hightec industries. 94% of the worlds supply of ITO, InGaAs, CZT comes from China and is nearly impossible to replace with materials from other countries.

In half an hour Biden will be sworn in as our 46th president. I hope Trump will be fading in our rear view mirrors and just remain a stain on our democracy. Republicans are now having to deal with the lies and and damage Trump did to our country. That won't be easy and they deserve the shame that will hang over their heads. Good riddance Donald Trump.

The Trump error is over, but not before Trump pardoned his spin master Stephen Bannon. Bannon was charged with fraud in his "Help Build The Wall" scam in which he pocketed more than $1 million personally. In fact Trump pardoned or commuted the sentences of 143 felons and indicted persons. If you gave to the "Help Build The Wall" scam rest assured that Bannon will hold onto a large part of that money and the wall is not going up as President Biden is putting an end to that. There is hope again in America. YES!!!!

To have a stain on something, you first have to have that something.
They showed Biden walking on stage. I can just hope at his pace he'll get to the White House in 4 years from now. BTW why is there a bulletproof glass between him and KAMALA? 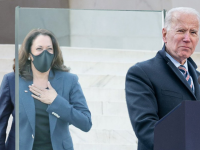 Democracy is messy. It always has been. But, what Trump did to it will takes years to get over fully. I'm embarrassed he was ever our president and I'm not, by far, the only person that feels that way. Three living presidents attended Biden's inauguration today...... Obama, Bush and Clinton. Trump wasn't missed at all. Carter would have been there, but for being ill.

Looks like Bill Clinton couldn't quite help but nod off for a bit during the speech though.

​
"Unity" LOL
Is he so swampified that he really imagines the American people are that gullible, stupid. incapable of accomplishing anything in life, brain dead, and unconscious?
Biden's "unity" looks like it means return of the super-swamp, playing Biden like a fiddle, meaningless deceptive drivel for the masses, and as much reckless spending and big government rule and rules as everyone in the executive and legislative branch can get away with, unfortunately.
Biden is no answer for anything---pretty clearly for his first couple of days Americans and America are an afterthought and certainly not a priority--only the left's agenda.
I guess everyone will see how much less they will have with time, how far and fast they lose whatever makes them happy especially those with very little.
Fairy-tale/make believe Ideals, notwithstanding.
We shall all see in due course.

Inaugural Address Spills Over Into Second Day As Biden Continues ​ 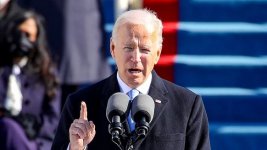 WASHINGTON—Carrying on breathlessly with no sign of soon stopping, President Joe Biden’s inaugural address spilled over into the second day Thursday as he continued to list the greatest issues facing the nation. “Child poverty, crumbling infrastructure, cyber warfare, wildfires, opioids, domestic violence, hunger, and homelessness plague our nation—not to mention sex trafficking, automation, hurricanes, obesity, and misinformation,” said Biden, who clutched the podium with both hands in exhaustion as his speech to the nation stretched into its 26th hour, continuing to list immigration, unemployment, offshoring, guns, the wage gap, and water contamination as just a few of thousands of challenges waiting on the road ahead. “Gerrymandering, the decline of manufacturing, sexual harassment, and food deserts. Chlamydia, the cost of insulin, water privatization, credit card debt, dog fighting, and teen drinking. High murder rates on indigenous reservations and rising sea levels and smog. Low teacher salaries, E. coli, data breaches, voter suppression, animal testing, and PTSD. Plus, you can’t forget the student loan crisis, lobster overfishing, the structural inequalities of the Senate, home foreclosures, the loneliness epidemic, toddler drowning deaths, cyberbullying, and suicide.” At press time, Biden had continued rattling off gang violence, robocalling, and asthma as EMTs transported the dehydrated president into an ambulance.
~The Onion- America's finest news source~​
Last edited: Jan 22, 2021

It's hilarious that you didn't mention Trump's tax break of $2 trillion for the wealthy. Republicans can no longer use the mantra of fiscal responsibility as they spent like drunks during Trump's time in office. And not for the things that the people needed either. Biden wants to help people impacted by this pandemic and its mismanagement by Trump and the economic collapse because of that mismanagement.
U

paul1598419 said:
It's hilarious that you didn't mention Trump's tax break of $2 trillion for the wealthy. Republicans can no longer use the mantra of fiscal responsibility as they spent like drunks during Trump's time in office. And not for the things that the people needed either. Biden wants to help people impacted by this pandemic and its mismanagement by Trump and the economic collapse because of that mismanagement.
Click to expand...