paul1598419 said:
Hell, the Trump statement that Obama was not born here was a racist call that a Black man had no business in the White House. He literally called Mexicans all criminals and Muslims were not allowed to reenter this country once Trump was inaugurated and provided an executive order making this so. The case brought against him in the 1970s against not allowing people of color to rent any of his properties...their applications were marked with a "C" for colored. The list is endless. The "Black Houses"!? Really? Thanks for making my pooint.
Click to expand...

Wait what?? How is that a racist statement?

He didn't say all of them were just the ones who were actually breaking the law by coming into this country illegally. Making the decision to prevent further muslims from entering this country was due to terrorists who have been doing attacks on the US. It isn't making the statement that all muslims are bad it was merely a precaution to prevent any who may be terrorists entering the country.

Yes I made a joke about the insanely racist statements made by your people. Paul I wish you would just go somewhere else. You're a massive hypocrite and you lie in an attempt to make yourself and people like you out to be good, humble people looking for the best interests of everyone when it is totally the opposite. You don't make points Paul, you make inaccurate statements and it's quite sad honestly.

paul1598419 said:
Hell, the Trump statement that Obama was not born here was a racist call that a Black man had no business in the White House.
Click to expand...

How is that connection even possible? If Obama were white and he accused him of being born in Poland, would that also mean he was racist?

He did not. In fact many Latinos voted for him.

paul1598419 said:
and Muslims were not allowed to reenter this country once Trump was inaugurated and provided an executive order making this so.
Click to expand...

He barred Muslims of some nationalities to enter and allowed others. You're not proving racism this way.

paul1598419 said:
The case brought against him in the 1970s against not allowing people of color to rent any of his properties...their applications were marked with a "C" for colored. The list is endless.
Click to expand...

Settled without a conviction. Searched for the "marked with a C" and found nothing besides it being from a testimony by disgruntled employee. You wouldn't accept countless affidavits, statistical abnormalities and actual photographed evidence that the election was stolen and we are supposed to accept the word of some guy? Even if that C mark story were true, in the worst case it's indicative of racial profiling which isn't racist by itself. It's simply a quick, inexact and low resolution method of separating the wheat from the chaff - tenants that are going to pay and those that aren't. Blacks had generally lower incomes. did they not..

He's right. The democrat party has sunk deeply into identity and gender politics. No need to be racist to acknowledge that fact.

Just saying paul, all of the dictatorships in this world, the worst of them, they boast having elections. So that's not enough to claim you're a democracy. You know you're living in a democracy when you can step up on a crate in town's square and yell your opinions without it costing your life.

“Senator Mitch McConnell, the Republican leader, has told associates that he believes President Trump committed impeachable offenses and that he is pleased that Democrats are moving to impeach him, believing that it will make it easier to purge him from the party, according to people familiar with his thinking. The House is voting on Wednesday to formally charge Mr. Trump with inciting violence against the country.”

Yeah, more Republicans are on board for impeaching Trump this time. Both is the House as well as the Senate.

The point is that no one would even accuse a white person of not being born here. That was a "dog whistle" used exclusively against Obama by Trump and was seen by many as a call that a Black man has no business in the White House. Well after Obama went out of his way to produce all birth certificates and the announcements of his birth, Trump was still using this to delegitimize his presidency. He is the holder of the largest fan base of White Supremacists ever in the USA.
Last edited: Jan 14, 2021

What a nonsense conspiracy theory.

There aren't even that many white supremacist left in America, just a few wackos here and there, stop trying to label Trump supporters racist, that's flat out bullshit and you know it, it's all about the black vote so you regurgitate the liberal propaganda, most of Trumps supporters are not racist, but looters who attack white people on sight are racist and so are people who use race baiting as a political tool, you race baiters are the worst racist of all.

“Senator Mitch McConnell, the Republican leader, has told associates that he believes President Trump committed impeachable offenses and that he is pleased that Democrats are moving to impeach him, believing that it will make it easier to purge him from the party, according to people familiar with his thinking. The House is voting on Wednesday to formally charge Mr. Trump with inciting violence against the country.”

I don't care if they impeach Trump, I would rather not have to vote for him again, Trump was quick to ban a piece of plastic firearm accessory and quick to throw due process out the window with redflag laws, Trump implemented more gun control than Obama and Trump did some dumb stuff but also a lot of good stuff, I prefer Trump to whoever is propping Biden up and pulling his strings but I don't think he could win again, it would be better for Republicans if he didn't run again so Impeaching Trump will be doing Republicans a favor because we don't need him running again and it will piss people off which will act to unify everyone for the fight ahead, so go ahead and impeach him. 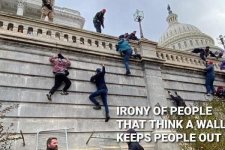 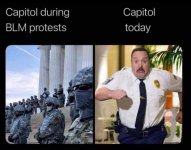 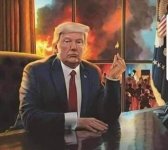 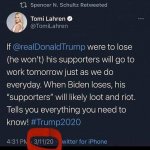 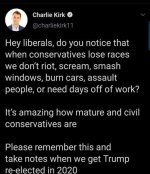 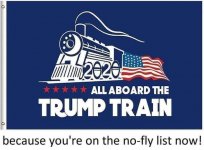 So now were all going to ignore the fact this election was stolen ?
I would call that extremely extenuating circumstances.
Besides this little flare up that happened at the House is really mild compared to all the liberal looting and burning we had seen last year.
This is very mild compared to what Biden/Harris could provoke if other democrats go along with it all.
We should be talking about doing a multi head investigation into this stolen election but we all know that can't happen, even if it did all we would get is a multi head cover up.

@ Shakenawake: Keep checking your mailbox every day for that universal income check........I just know Biden/Harris will be working so very hard to get you squared away........
Last edited: Jan 13, 2021

Far less Trump supporters believe this election was stolen from Trump. That is the Trump lie that Trump started back in 2015 and continues today. Of course Trump is always the victim. Many of his supporters do believe that. But, this election was never stolen. Unless you believe that people of color shouldn't vote. Trump does keep the love of the White Supremacists and they do turnout to do his bidding. None of the people who turned of to storm the Capital were antifa or leftists. They were all MAGA. Good bye Donald Trump. You should have never been here to begin with.

This election was stolen.

Americans of every color are entitled to vote, but only 1 vote per person.

What you want is socialism and your race bating is keeping racism alive for your own use, you race baiters are white supremacist by your actions and Trump supporters who voted for Freedom are victims of your racism. Biden is a racist and a pedophile, a criminal, a sexist and a liar but you could care less, it's all about socialism and all you pretend to care about is an obvious facade.

Erick Swalwell who was caught sleeping with a Chinese spy has been appointed impeachment manager, this impeachment is Pelosi seeking revenge, I don't think they will be able to get the votes.

How about impeaching liberal city Mayors who enabled the rioting, looting, burning and destruction in 2020 ?

BTW Are we all still in mortal danger from the covid pandemic ? Is impeaching a President with less than a week left more important than covid which is mutating while vaccines go bad before people can get injections ?

Just now the House passed the threshold to impeach Trump again. That was with at least 9 Republicans voting for it as the vote is not over. Impeaching Trump is about holding him accountable for inciting a combat on our Capital. Even Moscow Mitch seems to be on board this time around. Time will tell. He will go down as the worst president we've ever had.
Last edited: Jan 14, 2021

The final vote to impeach Trump is in and 10 Republicans joined with Democrats to impeach the Donald again. That was 232 in favor of impeachment. Looks like it will be up to the Democratically controlled Senate to hold a trial. I hope they move forward expeditiously as he needs to be held accountable for inciting a mob to take over the Capital.
Last edited: Jan 14, 2021

Hope we get the 2000 stimulus checks

if we do end up getting that 2,000 I think Jordan and Gary will be getting some of mine LOL!!!