I suppose you could say that name calling evolves into physical violence and that evolves into civil war even if it's a gorilla war which will be fostered and exploited by politicians to implement more control, politicians love to create a problem so they can " fix " it with new laws, new laws that suppress Freedom for the " greater good " but really only centralize power and enslave us all, but this started in colleges where students were told people who disagree with you are verbally attacking you by disagreeing and that you should use physical force against people who say things you don't want to think about.

People who refuse to address the facts and make up their own are just as bad if not worse than any name callers and people who lash out because they don't want to hear any opposing opinions are the worst.

The censorship that we are seeing will not make things better, it will only inflame angers and it follows along the lines of refusing to listen to opposing opinion, my fear is this is being done on purpose to create a problem too fix, but I expect democrats will push too far and start a fire they can't put out, I expect Biden/Harris are doing Chinas bidding trying to implement socialist control and disarm Americans and in pushing this agenda they will create backlash much bigger than they expected and bigger than they can deal with, it all comes down to the numbers, there's not enough " enforcement " to control tens of millions of people once they start marching in the same direction with pitch forks in hand and torches ablaze and that's where we going if we can't come to agreement on some big issues and push our politicians to represent us rather than deceive to control us.

More videos are coming out about the Trump supporters who stormed the Capital Building on Wednesday. The way there devolved into a mob is quite stunning. They started attacking the media, police, though you don't see any "blue lives matter" here, and Representatives and Senators. Democracy is a fragile thing and I'm glad to see that more of these people are getting arrested as they are identified. Yesterday there were at least 83 people under arrest and I expect that number to increase drastically as individuals are identified in this mob. This looked much more like a third world country than the USA.

I've seen and posted here too much evidence that suggests the actual agitators and indeed perpetrators were not exclusively Trump supporters, and that's an understatement. You have accused Trump of inciting violence without showing here a shred of evidence, paul.
On the other hand you have showed zero outrage when BLM/ANTIFA riots tore up your country for an entire year. Occupying cities, attacking federal buildings...and all that goes before even mentioning that the ones who called for that violence were KAMALA, PELOSI and other left wing witches.

I asked paul yesterday if Twitter was owned by conservatives and blocked Obama if he would still think it was ok simply because they owned the company..........paul did not answer and even if he did he would lie, fact is, if Twitter was conservative owned and they blocked Obama, REGARDLESS OF WHAT OBAMA SAID, paul would not condone this censorship and paul would call it racism, but when conservatives are infringed paul plays to the liberal agenda regardless of the facts, paul is completely agenda driven and patently dishonest to that end.

^Yeah, you can imagine what would happen if Obama or Kamala Harris got booted from Parler or something conservative run. The left would be SCREAMING racism so loudly that eardrums would implode across the country no matter what the context was.

Hunter Biden is a really really nasty guy. I'm not even going to say the actual word. Just that there's enough proof of it floating around in social media like Telegram groups and such, where the big tech can't censor stuff.
Also, I have grounds to believe his dad knew about it all along and this should be enough to disqualify him from being the POTUS.
just saying.

edit oh one more thing. I always had healthy teeth but I'll be damned if my natural healthy teeth were ever as beautiful as the job they did on him. Nice to know they can do magic today. 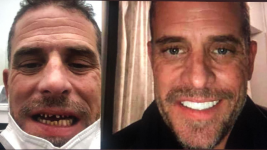 ANTIFA takes over streets in New York today and they are dressing up like riot police.

RedCowboy said:
ANTIFA takes over streets in New York today and they are dressing up like riot police. 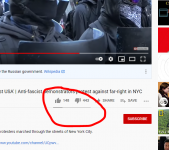 RedCowboy said:
ANTIFA takes over streets in New York today and they are dressing up like riot police.

H,
Fight fire with fire , send in the troops.
Rich

Well they do that the right to peacefully protest and we conservatives will be protesting plenty over the next 2-4 possibly 8 years, it's going to be a challenging time ahead but people are more determined than ever in the wake of this stolen election.

RedCowboy said:
Well they do that the right to peacefully protest and we conservatives will be protesting plenty over the next 2-4 possibly 8 years, it's going to be a challenging time ahead but people are more determined than ever in the wake of this stolen election.
Click to expand...

can't get this song out of my head for some reason

Surely you saw Trump and Giuliani and Trump Jr. calling out for the sedition of his supporters on the Capital. And they did so. Even Republicans are calling for Trump to go now. Tomorrow Trump will be impeached again.

No I did not. Humor me, please.
Also, you should listen to Lenny too.

This election was stolen and the American people will not forget it.

Senators and Congress persons legislate under our authority and their ability to legislate ends where our Constitutional rights begin, I expect we the people will be protesting again and again in 2021-2022 to remind our elected officials that they work for us and not Bloomberg and Soros exclusively, just how hard we the people have to protest is up to the legislators who overstep their authority which again is granted to them by we the people.

There was no sedition by the Trumps or Giuilani, they have freedom of speech too and are not responsible for the fraction of a percent of the protesters who went too far, then again some would say they didn't go far enough.
Last edited: Jan 11, 2021

It's amusing that the same people who refuse to accept clear and irrefutable evidence that the election was stolen, accuse Trump of causing the capitol breach without a single shred of evidence.
In fact Trump literally called for a peaceful protest. Here are the exact quote and video

https://twitter.com/i/web/status/1348463264326365187
When it became apparent that the capitol building was under threat President Trump released at least 3 separate calls, in tweets and video urging people to calm down yet they all were promptly deleted by the social network websites.
Lying is like a second nature to the extreme left and its media. They natively follow the guidelines of the red pigs from George Orwell's "Animal Farm" - President Trump's truth becomes the lie and their lies about President Trump become the truth.
Suffice to say neither Giuliani or Trump Jr. had anything to do with this either.