GSS said:
Off the recent cuff of postings and probably my only post here..
I watch the First 48 on A&E once in a while.. Why is it that Texas has the most lenient sentencing to criminals?
Iv'e seen first and second degree murder charges where the guilty only get 10 or 20 years tops.. This is insane.. How could a loved one of a victim deal with this??

When I lived in Texas it depended on who could afford the best legal counsel. Minorities often got the worst sentences for any crimes. I knew people who got life sentences for possession charges and Texas was leading all states in capital punishment. So, those who got 10 years for capital murder paid for it monetarily. Maybe things have changed in the past 40+ years, but that is certainly the way it used to be there.

Trump haters need to wake up:

It has to be different now?? Paul were you there in the middle 80's?? Wonder if your years in Texas had to be around the time of the Boston Celtic's draft pick of Len Bias and his death..
Low low level pot dealer's getting hardcore sentences for a couple grams of weed..

I was there in college during the 1970s. I was long gone by the 1980s. Yeah, people got life sentences for possession of drugs. Some for pot, but others for prescription drugs like demerol too. I don't believe anyone should been sentenced to life in prison for possession of anything. It certainly didn't work as a deterrent.

And, yes, we have all heard Trump rant about people he believes have crossed him. I have read the transcript of Trump's conversation and Adam Schiff read it verbatim. He didn't change a single word, but Trump has also focused his ire on the whistle blower, as if that person is not protected by law and Trump can do nothing to him or Schiff, as much as he would like to and no matter how much above the law he believes himself to be. It is all just a ploy to try to distract from the awful abuses he has conducted since entering office.

This guy is a rebel-rouser:

paul1598419 said:
I have read the transcript of Trump's conversation and Adam Schiff read it verbatim. He didn't change a single word
Click to expand...

Hi,
I usually don't add to political issues but since Hillary Clinton lost the presidential race the Democrats been on a witch hunt after President Trump.
Lots of money wasted on hearings etc. And not to forget a whole lot of sore losers . Further president trump been rattling the cage to get this country back into shape and not an easy job. Democrats been to comfortable to long feeding from the trough and giving things away for votes. Like when you take away a babies bottle before its done feeding. This is the new democrats symbol

RedCowboy said:
Verbatim........REALLY ?????
Even the liar Adam Schiff admitted his words were a " parody "

Schiff quoted this memo several times and I admit that I hadn't seen this one that you referenced on Fox. The one I was referencing was read verbatim, so I don't know what was left out in this Fox News clip. I'm fairly certain there was more here that they left out that would have given substance to the reason he said what he did, but don't have time to go searching for it now. Fox News has lost what little credibility they may have had by omitting pieces of quotes in the past to make something seem more damaging than it is or to defend Trump. The shame is that Trump supporters seem to only go to Fox for their news and, therefore, get only that spin of what is actually going on. But, the impeachment inquiry is not aimed at them, but at the other 60+% of the country who still have open minds. Daily the polls increase in the number of people who believe that Trump should not only be impeached, but removed from office. This has become a majority now and with the amount of new information coming out will likely only increase as time goes on.

Schiff is a liar who makes shit up, Trump did nothing wrong, CNN has ZERO credibility, pitiful viewership and people are getting tired of the fake crap, also the dems are likely to lose the house over this come the election and Trump will NOT be removed from office over this nonsense, but keep the hope alive.

The reason Trump supporters are saying that Democrats will lose the house is because that is what happened to republicans when they impeached Clinton. But, the two are not at all the same. This is much more like Nixon's impeachment than Clinton's. Republicans lost big after that one too. As I said before, I don't get my news on CNN. I go to PBS and the BBC, which do give factual stories without all the spin. I also subscribe to the Washington Post. They have the greatest credibility as they still have a very reputable investigative team and fact check everything before printing it.

Hi,
I usually watch OAN not any other news stations , the only time I watch FOX ABC NBC or others is to compare their views to OAN .
Seems that all the others are non credible and are susceptible to government proofing.
Rich

paul1598419 said:
The reason Trump supporters are saying that Democrats will lose the house is because that is what happened to republicans when they impeached Clinton. But, the two are not at all the same. This is much more like Nixon's impeachment than Clinton's
Click to expand...

It's the wet dream of every liberal Trump hater that anything against Trump will be like Nixon, but this is nothing like Nixon, it's just nonsense and it's not going to amount to anything.

Even my guy Bernie is on the impeach trump bandwagon over the Ukraine thing, but to his credit, he did at least utter the word "emoluments" when I saw him on with Stephen Colbert the other night. Wish he would have elaborated on that.

For the record, impeachment does mean being removed from office. But it has to pass the Senate with 2/3 majority. That didnt happen with bill Clinton and it won't happen with trump. He will beat it and get to play "teflon don" again I fear.

I really would like to hear all the trump people defend his position on Saudi Arabia more. Especially after all his rhetoric on them while campaigning. Seems he went from saying they did 9/11 to being their little bitch boy. He vetoed a measure that would have ended our support for the genocide in Yemen. School buses have been bombed with our bombs there as have open air markets so I can only conclude that trump endorses and supports terrorism. Guess it's ok when the victims are poor brown people that pray to the wrong god 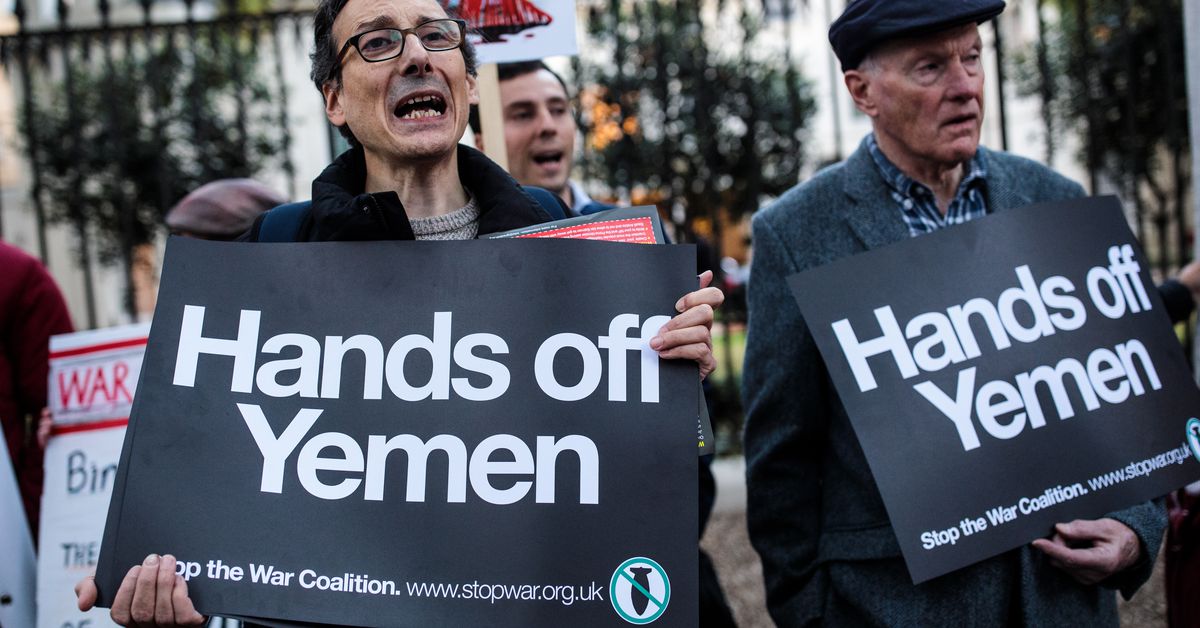 Republicans tried to weaponize anti-Semitism against Democrats to block the vote — and failed.

It is unlikely that Trump will be convicted since it takes a super majority to do so. But, I don't see him being able to say he's been vindicated, especially if a majority vote to convict.

When republicans tried to remove Clinton for lying about an extramarital affair, this was seen as highly political, but the polls are showing that this is not the case with Trump. Also, I've seen many political adds by Trump trying to get ahead of this, using his reelection money to finance this obvious misdirection of these issues. This is not at all good for Trump no matter how he tries to spin it. Too many people are paying close attention to this impeachment inquiry. And new evidence seems to emerge almost everyday.
You must log in or register to reply here.
Share:
Facebook Twitter Reddit Pinterest Tumblr WhatsApp Email Link