Here is a Power,Wavelength and a couple beam shots of the New 465nm NUBM07 Laser diode.

This is an Awesome diode with the highest wavelength we have seen so far stable with the highest power. I'd say its a "Sky Blue" diode running it at the Max Current that we typically run diodes at today. These Peak Higher then the 462nm diodes thats for sure.

This diode hits 470nm No problem. I bet we may even see some get closer to 480nm Before roll back.:wave:


Here is the Datasheet:

The back of the diode. It says 465 on it. (The diode was scratched when i got it like that but you can still make it out so its for sure a new diode we have never seen before)

Beam size near field is ~1.85mm x 3.2mm for the NUBM07E @ 3.5A. This measurement was taken at 10" from the actual G-lens. I used a dichroic mirror that passes the blue @ a 45 and measured the back reflection waste beam that comes off it. The image above is not spatial filtered. But just regular beams with G lenses. As you can see much better.

Power Tests are done with a G lens.

Here is a Graph for those that want to skip the images: 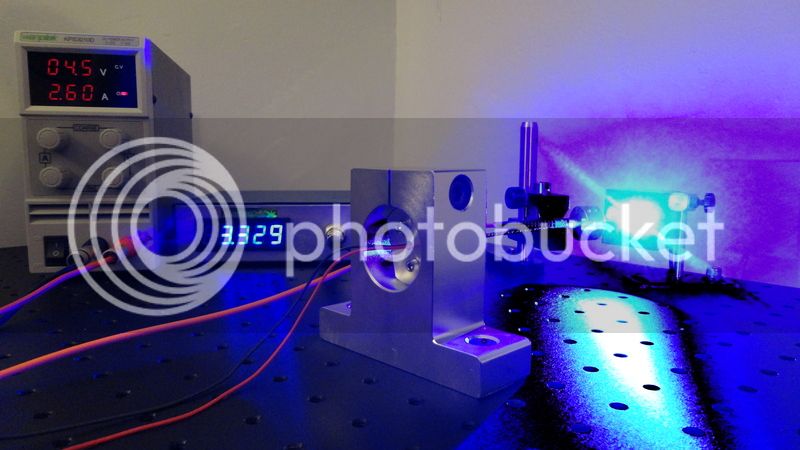 It is to be noted that the power test was done at a more realistic temp for Handhelds of ~30C-40C. If you are curious at 25C expect ~500mW more power in the images.

Right before Role back at this Temp:

Right after roll back if your willing to push it for Higher WL with risk of diode damage:

Again it is to be Noted and payed attention that the ROLLBACK will be at a different point if your diode is at a different Temp then what i show. Pretty much anything above 5A is not recommended IMO and with 4.5A being the MAX... The typical roll back i noticed is around 5.5A-5.8A at 25C. So if your experimenting to get that extra 1 or 2nm out of the diode just pay attention. I do know that at least for this diode it wont die up to 5.8A... Past that i do not know. Dint want to push it until i get more diodes in.


Here are a couple Quick Videos:


^With a Glimpse of the next diode i will be posting.


All in all this is a World Breaking diode. 470nm+ with a tighter beam profile then the other NUBMXX diodes give is Just plain awesome. With the Higher Wavelength that these give at a much higher power then the 462nm diodes its just something we have not seen yet. These are as close as we got to 473nm diodes and id say we are kissing right at the edge.

These are Not only brighter but also tighter beam then what we have seen in 3W+ diodes. So i think these would be a Great blue "sky blue?" addition for combining and maybe even a better option. What i can say is these are a much sharper line/dot then the other NUBMXX diodes and ill try to show that later. Very Similar to M140 when it comes to sharpness.... Ill be correcting this beam a little later and will post an update. I got too many different new diodes in all at once "like 8" to test and just been overloaded. So the more intense beam testing has been lagging but iam getting there.

Holy crud nice wish i had the kind of money to do testing like that.

Hot damn, that's one beautiful diode you've got there.:beer: Any idea if, and when these could become available?

These are Cool diodes thats for sure.

Yes they are available now on ebay but ill have some in for the store in alittle. Iam sure DTR will have them too.:wave:

EDIT:
I hope we find some high bin ones hitting near or above 480nm. I have not really pushed the diode past the roll back much but iam certain i can hit 480nm.
Last edited: Jul 20, 2015

Awesome! Did you decan it, or did it not have those wonky stock lenses on it?

That's not as expensive as I thought they would be, definitely not cheap, but at least you can keep your firstborn. :crackup:

Wow, for a near 480nm high binned one, I'd give up a whole lot of that power!

DROOOOOOLLL, this is a great news. As I mentioned in other DTR threads, we are seeing some great new diodes coming out in the year or so. Just great for hobbyist community.

I need to get money for lottery tickets first
This is some awesome stuff. Even 1 watt of sweet 480nm photons would be epic! I would love what some of the pros can do with these diodes. I hope they don't have the window problems like with the NUBM44... Thanks for sharing lazeerer! Will rep when I get to a pc

So these are about 125 per diode then? I'm definitely going to get one. This is the best blue diode so far! Someone pinch me this can't be real.

This is sure to be an amazing diode. I can't wait to one day see such intense sky blue in person. Thanks for the review. This diode will likely bump my other builds farther down the queue. Have you had the chance to test more than one to see what kind of wavelength range we can expect, or do you think this one is pretty representative?

Thanks Angelos for the excellent review !!!

Note that the extension is only a portion of the circle...and even where it does exist....there is a 2.5mm cut-back.

This cut-back then allows the bezel retainer ring to be screwed into the host body.

The one piece of Aluminum now functions as both a heat sink and a place on which to mount the optics !!! Cost of the extended heat sink= should be ...reasonable !!!...And the Optics...well...another 40~50 bucks !!!

VisibleGreen said:
Definitely need your corrective optics for this once I'm able to buy one
Click to expand...

Hmmmm ???? A simple , inexpensive solid host....like a Black-Maglite S2CO-16 might be a very reasonable host to start with !!!

I still have some 445's left over in my concert projectors I need to swap out, and can't wait for these to hit the shops. One of my 462's runs closer to 465, and the color is glorious....can't wait to see these in action. My older 445's are really starting to look lame by comparison. At 465 you're really starting to get that look of classic Argon, and it's amazing.

Curious what industry these diodes are coming from. For classic display projection 465nm is starting to get out of gamut for proper RGB use, so it must be another application.

These are awesome and I have some on the way for testing but i am very concerned about selling diodes you have to rip the can off to use leaving the dye exposed. I may not carry them till I can find a source with a regular can on them like the NUBM44's compared to the NUBM41's.
You must log in or register to reply here.
Share:
Facebook Twitter Reddit Pinterest Tumblr WhatsApp Email Share Link