Looks like Jordan added the NUBM05 to his site, it's been available in arrays for a while now but we haven't been able to get single units.
What are the specs on it? Divergence? Power? If it's >6W at 5A it might be a very good alternative to the NUBM44.

I found this one http://www.semicomvisual.com/wp-content/uploads/2015/04/NUBM05.pdf but its only in the full 8 block

I think DTR had said that the NUBM05 was basically a GBall lensed NDB7A75, but I could be remembering that wrong.

If so the 7A75 could be corrected with a cylindrical pair for a pretty good beam, the 7A75 is still expensive, so these could be useable at a better price, I wonder what the NUBM05 spot size is at 15 feet with the Gball in place.

At 15 feet with the Gball lens intact these are the spot sizes I have measured.

I would like to know the spot size of the NUBM05 with the GBall intact, it could be useful as is, but I won't know until I see, I was waiting for DTR to post test data at the bottom of his page as it says but I still don't see it, if it makes 5 watts and prints tighter than the 06 with the GBall on I would work with one with the GBall intact and see how it goes. 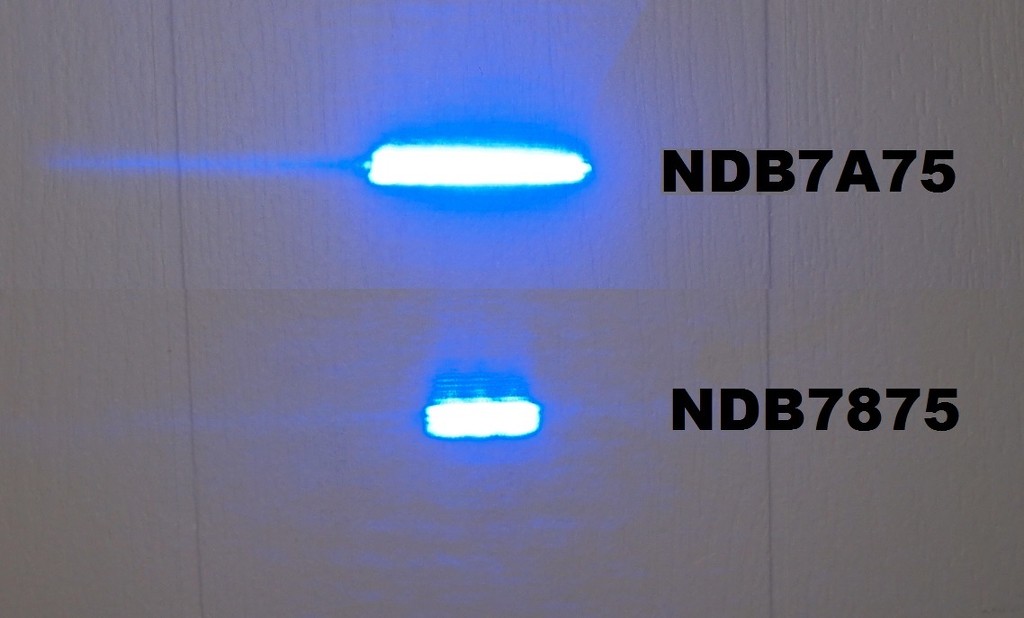 I just could easily find NUBM05 datasheet in ebay - it looks that many sellers are showing it now.

I have also seen datasheets for NUBM07 and 08 here on LPF couple of times.

I even have looked for and found the WL dependance on current for NUBM44 (in post 214 by Cyparagon, DTRs thread about 44 diode).

What I could not find is a datasheet for NUBM06. You show here, RC, that this is the one with the least divergence/power ratio and there is no dedicated thread to this LD which would have spec or some kind of graphed test results.

Is anyone registered on PL forum here? Maybe they could know something interesting?

With the Gball removed and at 15 feet with a DTR G2 lens.

Here is a 7A75 thread, I still would like to know what the spot size is through the GBall.

Has anyone done cyl correction on a NDB7A75? I wonder how they would do through a 3 element and podo 3X expander because I think the emitter is smaller like the 7875, usually stronger is better unless the spot is a lot tighter.

I took the PBS unit from my blaster, removed cylindricals and here you see both spots at 5m and 4.5A current. Upper line is from module with Gball, lower with G2.

Sure spot after G2 is more concentrated, but even after Gball the line is not such wide but a 10x25mm box. Maybe these Gballs are not consistant and can vary from LD to LD?
Last edited: Sep 17, 2016
L

Huh, it could well be.

Maybe the projector manufacturer can request what they want, there may be some standard options such as lens A,B, or C that they can order to be installed on their batch of blocks, I measured mine and you measured yours.

I had not removed my GBall when I measured the spot, if you had not removed and reinstalled yours then they must be different lens grinds because I doubt they vary that much in manufacturing.

My NUBM07 with a G2 at 15 feet makes a 16mm long line 2mm thick or slightly less depending on how well you focus it.

I use the DTR G2 except for 1 application I use a sanwu.

Is your top line through the G2 about 16mm long?

Wait a minute, my NUBM07 was 16mm long through a 3 element at 15 feet, not a G2, never mind that last question, I'm sure the emitters are the same, it must be the GBall is different from batch to batch depending on how they are ordered, I doubt the emitters would be any different.
Last edited: Sep 25, 2016
L

I looks that you are right in saying that Gballs can be different from LD batch to batch.

Now I have received 05 and 06 with Gballs from DTR and both spots at 5m look as squares like you described above in this thread for your 07 and 08 (50x75mm spots). The spot of 05 is smaller than that of 06 but not line anyway like 07 on my picture had.

What means we do not have to trust to the Gballs on any of LD types and replace them all by G-2 and use cylindricals to shape OR
use 3x Sanwu expander to focus the beam on the distance we want without any cylindricals (because the spot is almost square already).

What do you think?

In addition, the Gball of 06 focuses the beam at 20-30cm, then it diverges. I do not understand what the reason for such optics if it is supposed to be in PJ - to burn phosphor wheel, so the customer has to replace it every month???
L

Let me revive a little this thread with a new picture.

I received 2 NUBM08 from DTR: one with Gball and 2nd with G-2. And the situation with spots at 5m is exactly as with my both 07E: my Gball makes a very good 5mm wide line, not a 75x25mm square as your 08 did. Of course the spot with G-2 is 4 times more concentrated, but THIS Gball output can be corrected with optics into something decent...

Again, this confirms that one can by chance find many different Gballs with any type of LDs - same may happen with 05 etc. So there is no general Gball rule - only chances.