Modifying a Sanwu laser to have an orange beam?

I have a Sanwu Striker Saber (445nm, 1.6W) that I bought a few years back since I thought the idea of owning a laser that could burn things was cool. Now, I wish I had a nice looking laser that wasn't dangerously powerful. I really like the design and build of the Striker Saber, and was wondering if it would be possible to modify it to have an orange laser diode instead.

Maybe you can tell just by the post, but I'm not very knowledgeable on laser technologies, so I don't know if this would be feasible or possible.

Assuming you can take the pointer apart and remove the old diode, I am betting you could put a 638 nm orange-red diode in it, but the driver would surely need adjustment, maybe replacement. Might be better to just get with Lifetime17 and get a host from him to put a diode in.
D

Wakrah said:
Assuming you can take the pointer apart and remove the old diode, I am betting you could put a 638 nm orange-red diode in it, but the driver would surely need adjustment, maybe replacement. Might be better to just get with Lifetime17 and get a host from him to put a diode in.
Click to expand...

I was assuming I'd have to replace the driver anyway, which I'd have to do plenty of research on before attempting. I'm not particularly fond of the "multi-mode" driver it came with. The only reason I wanted it in the first place was because it had a low power mode, and a safety mode, where it could be locked into the low power mode. If I were to replace the diode, I'd go for something with a much lower power; 50mW max.

I like the host a lot and was hoping I'd be able to repurpose it, though I'm not sure how I'd go about removing the components.

I'd really like to get an orange/amber laser, somewhere in the 589nm - 605nm range, though those seem to be hard to find from what I can gather.

You can ask Sanwu how much to change the one you have---they have reasonable modification and repair charges.
The only choices and the diode wavelengths they offer and multimode or single mode switch electronics. The closest you can get is a 638nm red + simge mode electronics + shipping both ways if the had time and would do.

There are no direct diode amber/orange diodes 589nm or 605nm so you are SOL on that issue, only exists in your imagination.

They are hard to find because nobody makes them any longer. Occasinally a used one turns up for sale.
All 589nm and 593nm pointers are DPSSL and only one company ever made/offered them CNI in China, Everyone offering were just reselling CNI pointers which no longer offers or makes them.
On Sept. 30th, 2015 CNI officially announced that laser pointer and portable laser series products for SLA purpose would be no longer exported to the U.S. "from Oct 1st, 2015. The incoming SLA orders from American customers will be rejected. We sincerely apologize for any inconvenience caused!"
SInce 2019 CNI no longer shows any pointers or portables on their web site and Dragon Lasers, China a CNI reseller no longer sells them so...
Would assume they no longer make them or no longer accept new orders as CNI says but they will make and sell a 589nm module. Really, portables and pointers were a very minor/insignificant part of their business. CNI's real business being lab lasers and all of their other products. Pointers and portables became more trouble than they were worth especially with most all Countries making anything over 5mW amd some Countries 1mW, illegal to import or sell as items of commerce.

They will still make low power models like the GLP for old long established professional market Distributors/resellers like Laserglow Canada but most hobbist resellers who offered them now show them as "sold out" or "not in stock"
Laserglow still has a 589nm 5mW GLP pen listed for $689.00 if of interest to you https://www.laserglow.com/product/rigel-hv-yellow-laser-pointer

CNI does offer modules --you can ask them for a price and shipping on a 589nm module but it would not be cheap--last time I looked a PGL-H 589nm 80 to 100mW was approx $650 + $75 shipping you can see what they offer currently and ask them for price and delivery >>> here: http://www.cnilaser.com/Laser-Module.htm
Dragon still offer some CNI modules--they have a 10mW 20% stablility 589nm listed at $400 here: https://www.dragonlasers.com/ph-series-laser-modules.html

You would then need to get someone like Lifetime17 to make you a host. Would guess chances of anyone wanting to spend the time to evaluate fitting one to a Sanwu Striker to see if it can even be done with enough time and effort are minimial so...back to the mother ship. lol
Last edited: Mar 15, 2021 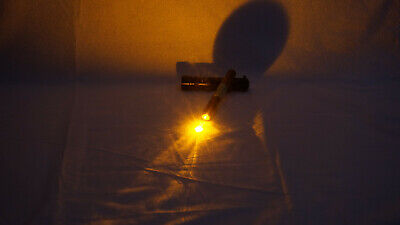 Find many great new & used options and get the best deals for 5mW 589nm Laser pointer (Like New) at the best online prices at eBay! Free shipping for many products!
www.ebay.com
E

Find many great new & used options and get the best deals for 5mW 589nm Laser pointer (Like New) at the best online prices at eBay! Free shipping for many products!
www.ebay.com
Click to expand...