This was really an endless nightmare, a neverending story.
After 18 waiting months and the same budget spent for an Hercules 600, I have finally in my hand a c-mount red laser with the new Lazereer ramp-up driver.
I prefer to avoid to list all the problems and issues that I have encountered, also because no one would ever believe a similar compilation of misfortunes.
The name "Jayzereer" was an invention of mine, in honor of the big work done by Jayrob and Lazereer.
So, the host has a massive 1085 grams weight (with cells), it uses 2x32650 6000 mAh Li-On black quality cells, it is rock solid, eye-catching and come with a generous aluminum heatsink.
The whole heatsink contain also the lens, and it is spinning, so to obtain the required focus it's enough to rotate the whole heatsink. This was a very good idea by Jayrob!
Here are some nice shots: 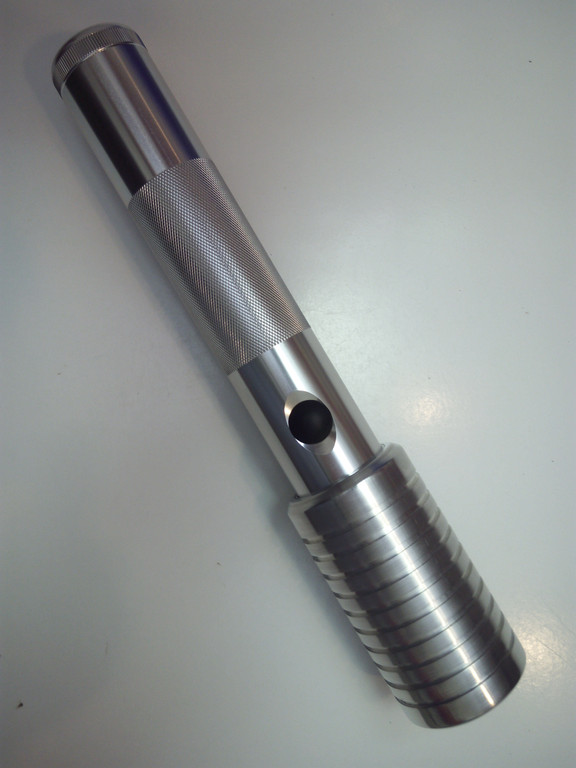 The headsink (head plus heatsink LOL): 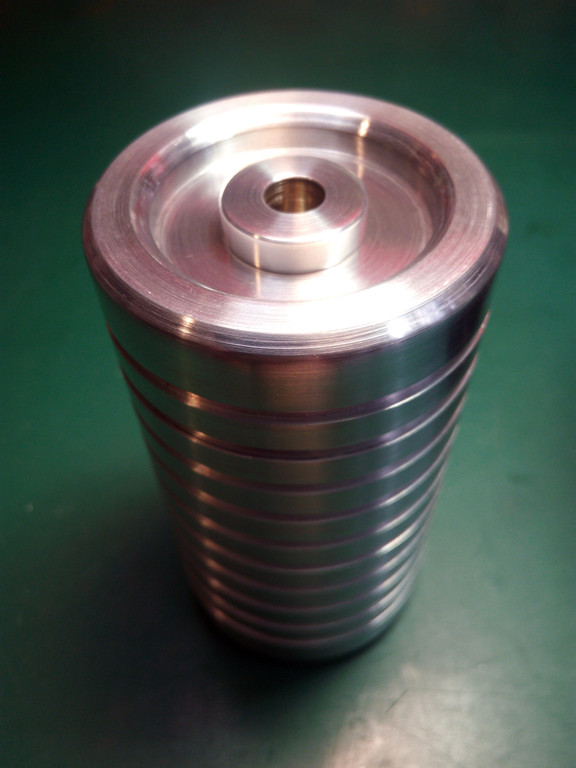 The long-focus lens inside the head: 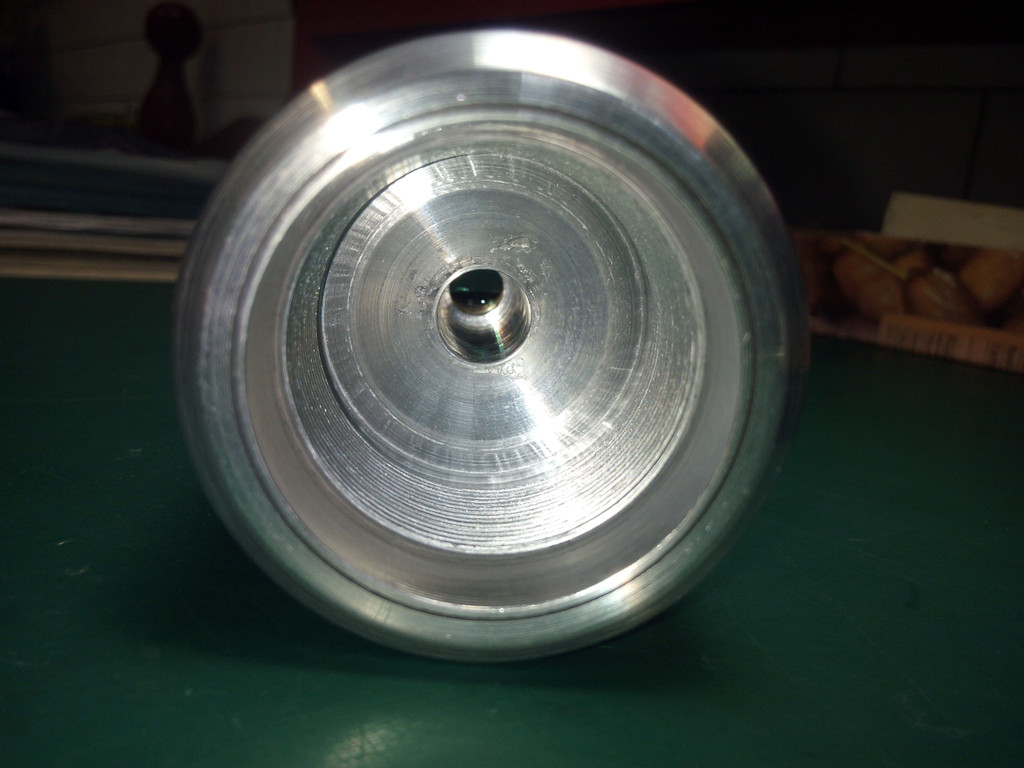 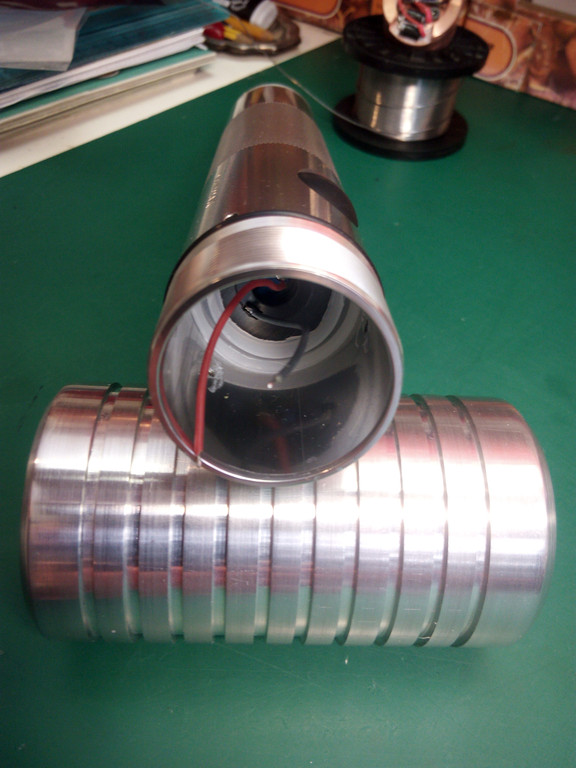 The host and the original tailcap: 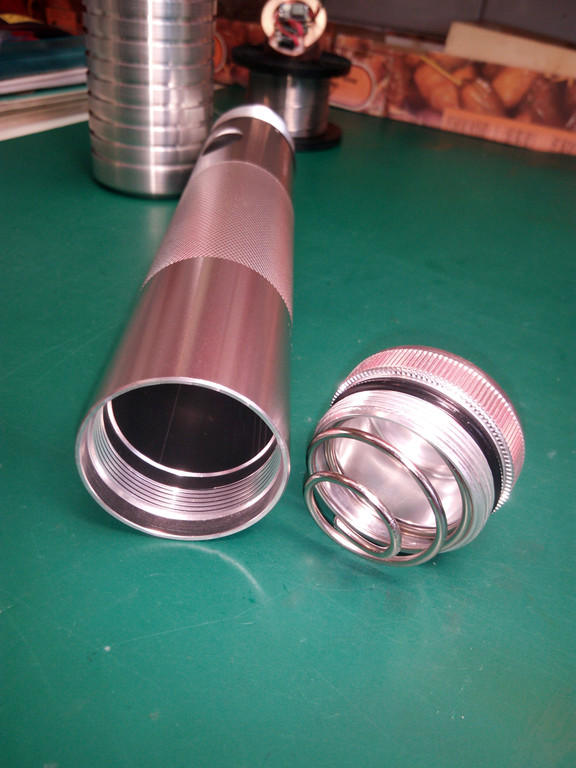 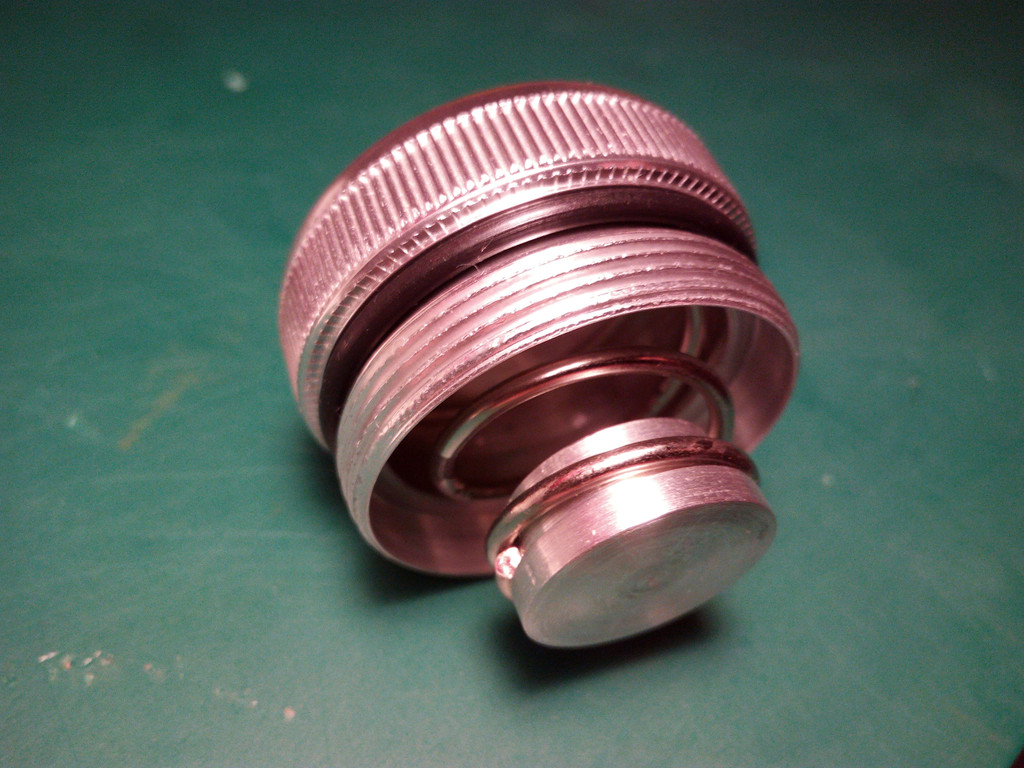 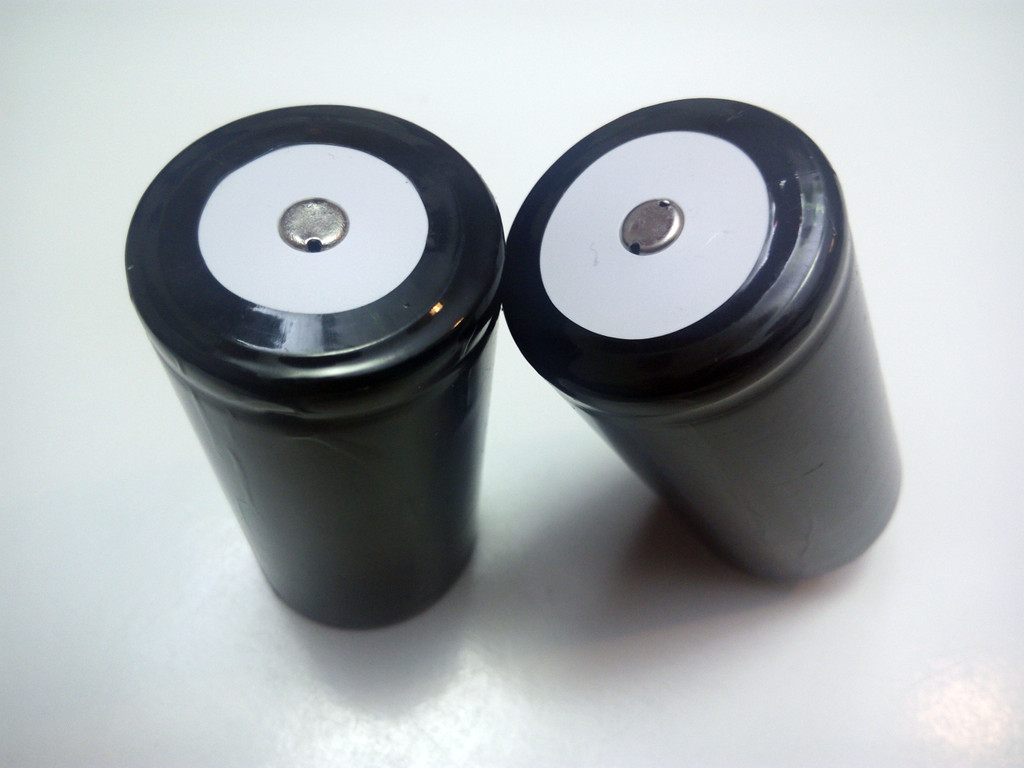 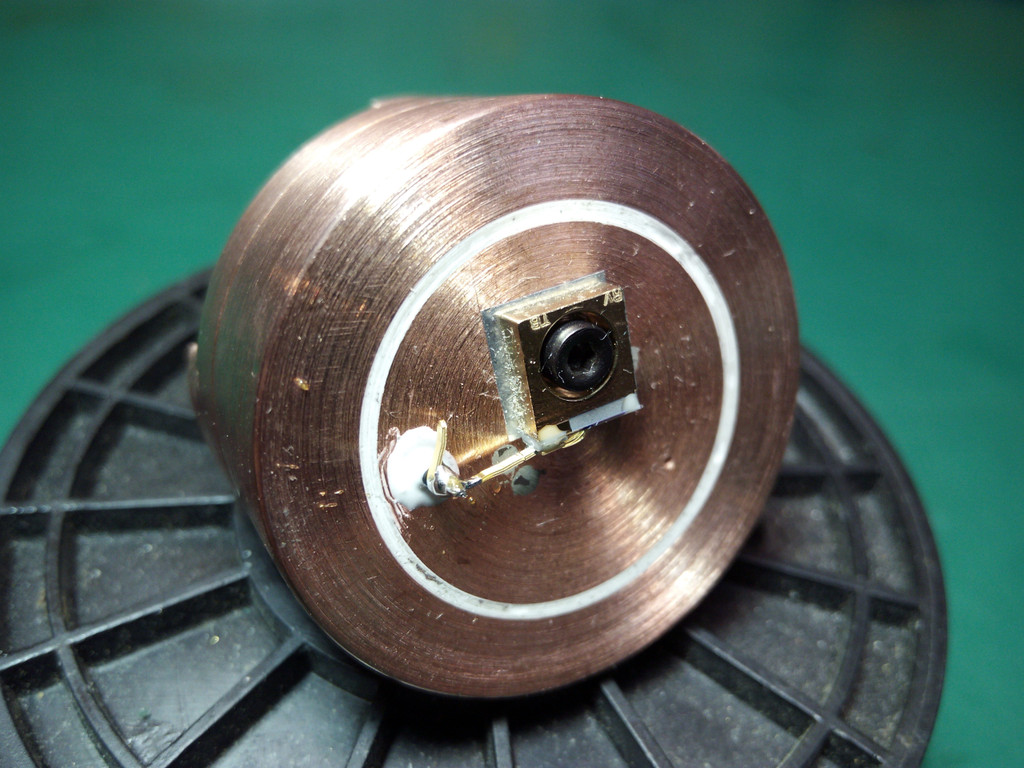 The heart of the device: the new Angelos ramp-up driver with two safety silicon diodes: 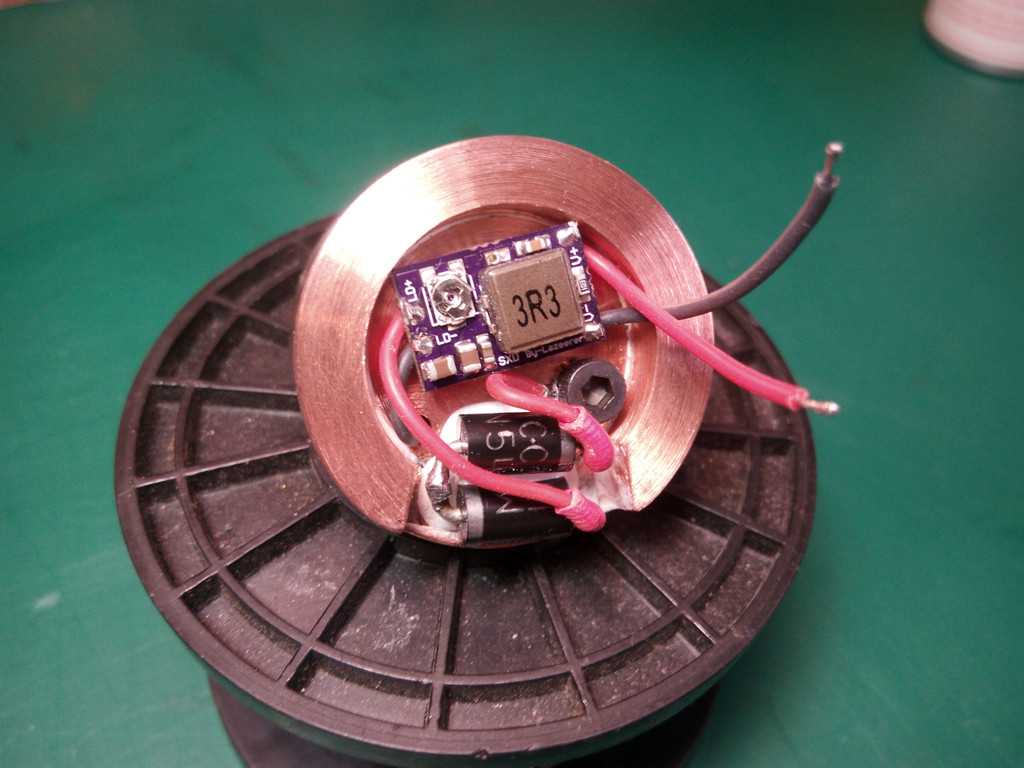 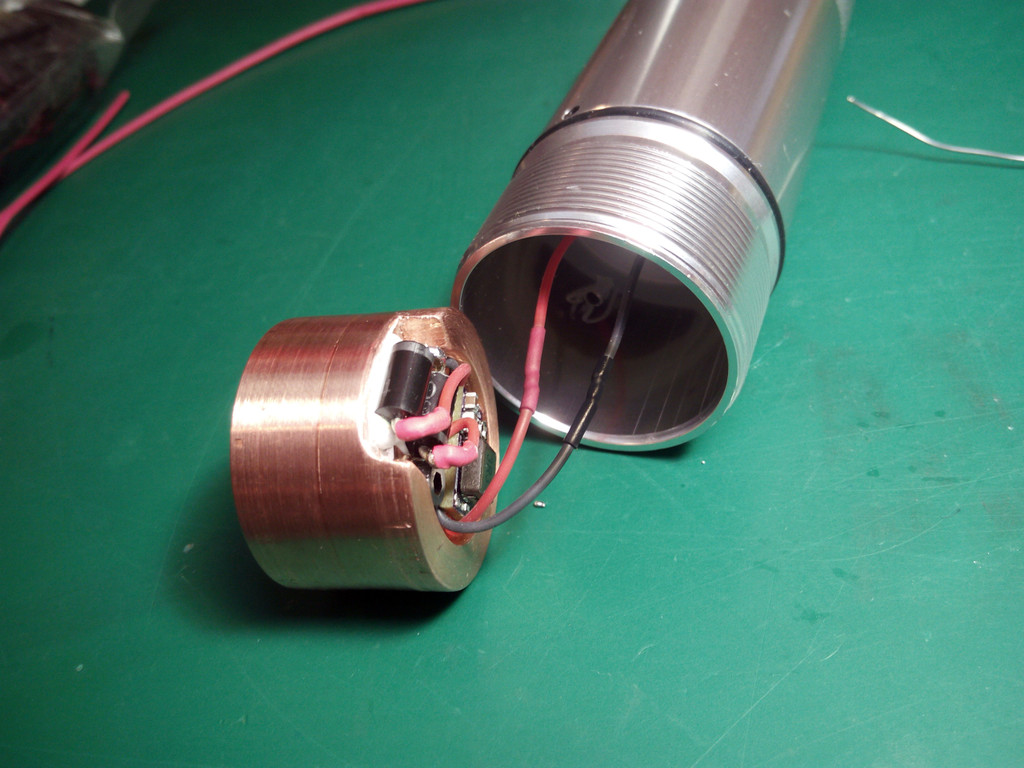 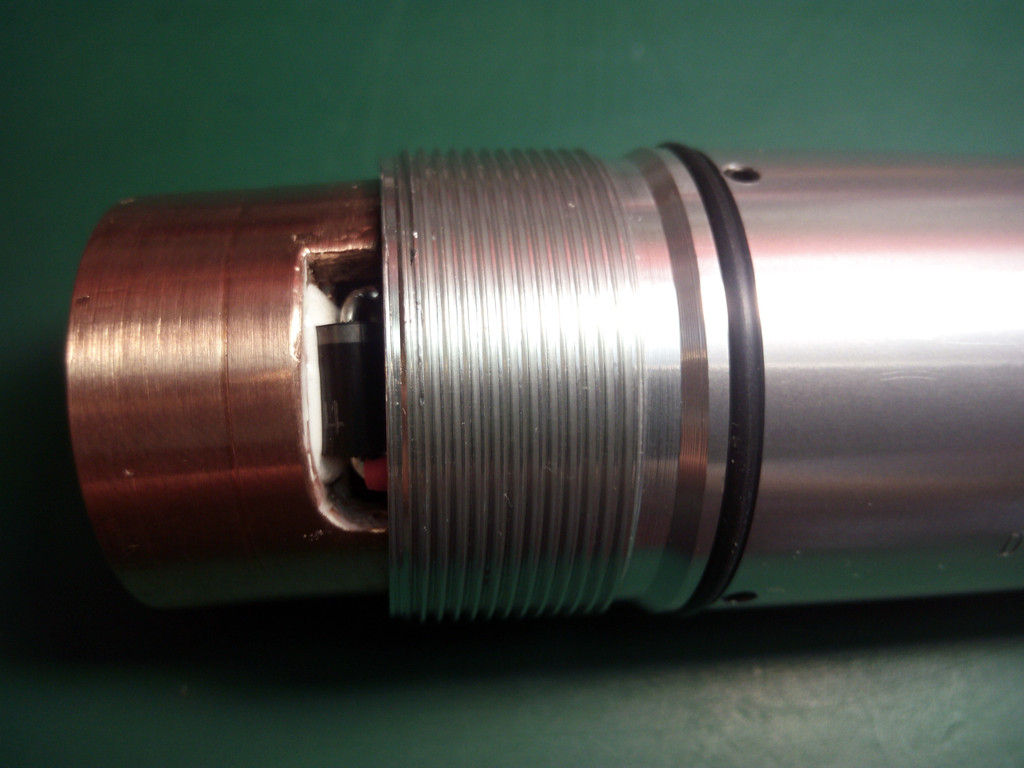 There was made three holes in the aluminum host to play with the (very little) gap of the copper heatsink, so there is the choice to centrate better the input beam inside the lens.

The beamshot inside my home (20 sec long exposure and some smoke): 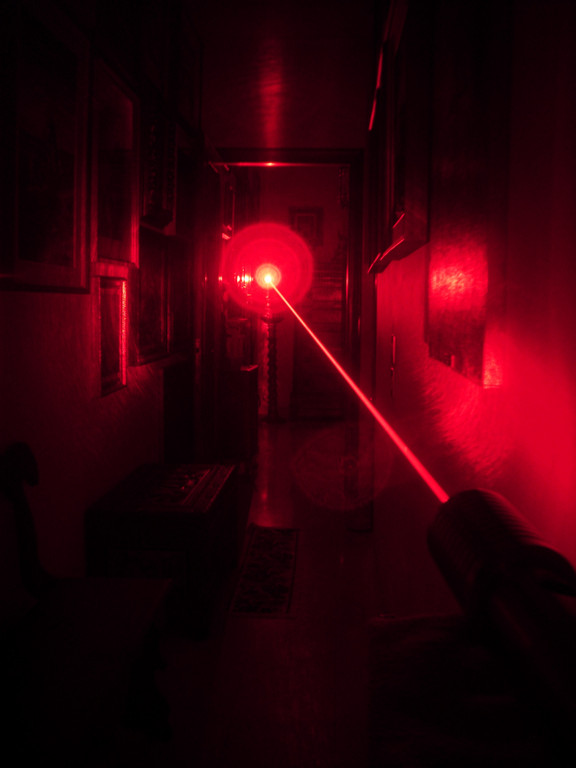 The beamshot outside (20 sec long exposure): 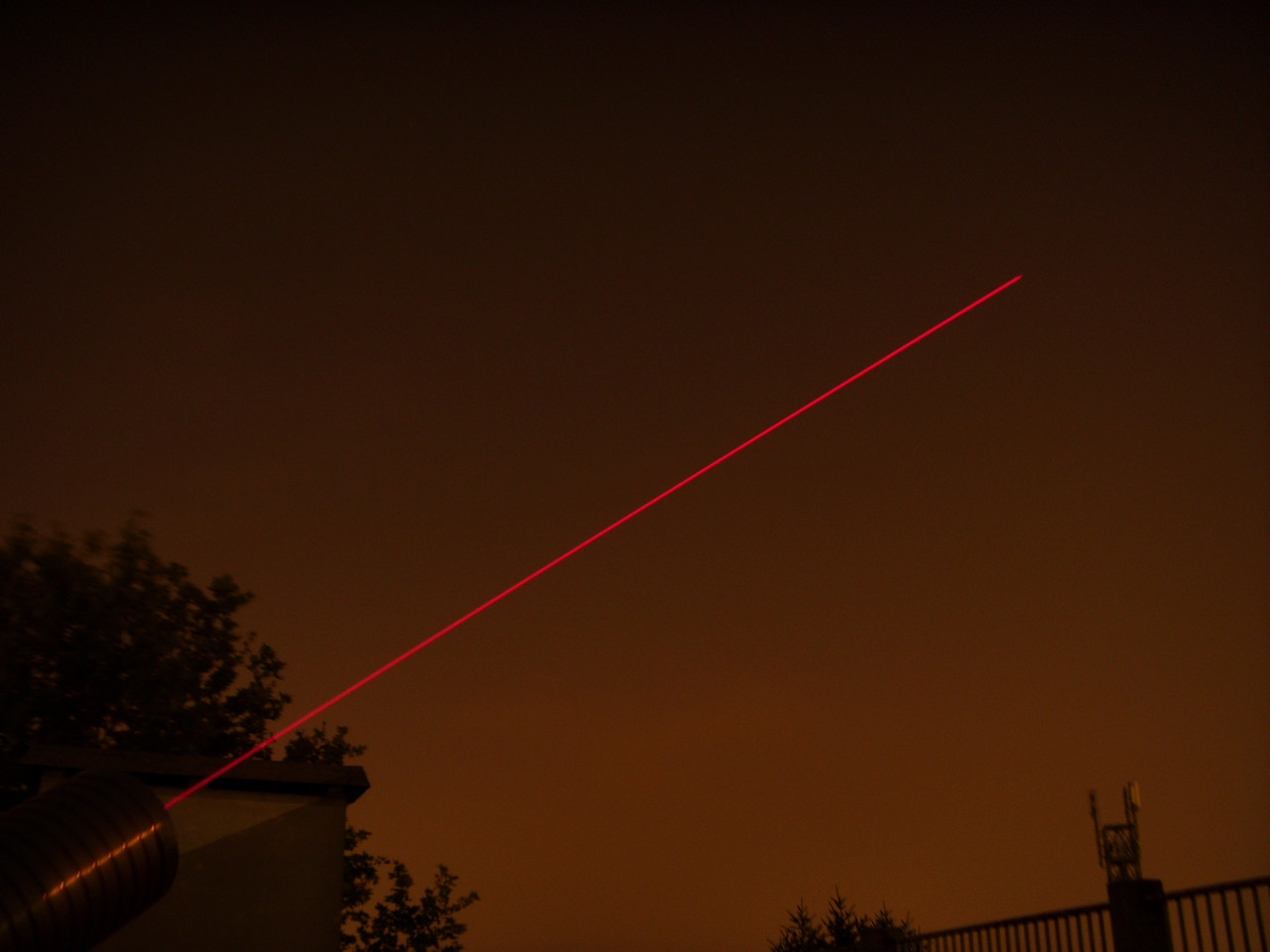 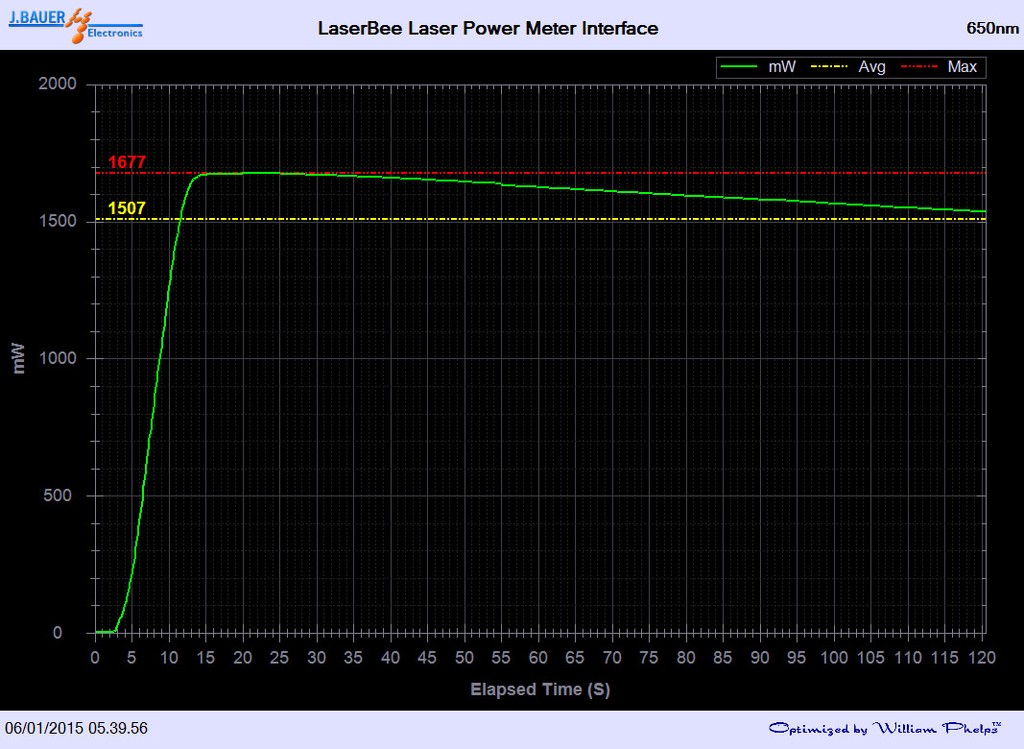 There is a 17 sec ramp up, and a 170 mw power loss during the first 2 working minutes.
Angelos told me that those red c-mount diodes are very delicate, much more than other diodes, so he has limited the driver current.
The diode is already at 10°C above the max temp allowed when it is off, so the chance to kill it if I try to increase the current in high, and since in the past I already have killed an identical 350 dollars diode, it is better do not reply the tragedy again!
Also, despite the indium foil, the copper heatsink and the external big aluminum heatsink, it is better to keep short duty cycle for the above mentioned facts.

Conclusions: this laser was done only for collection. The dot shape is between a line and a rectangle, it has a long range focus, it is not so visible, it is very expensive, it is delicate. It is not a laser for everyone.
If I had a time machine, surely I do not repeat a similar odyssey. I'm happy to have this laser working, but surely it will be a laser little used.

Thank you for sharing, looks great!

I want to do a build for a C-mount diode too but as a IR illuminator with the focus adjustable from a large spot to infinity focus. One big problem is I cannot find a suitable driver which can produce 15 amps of current at 1.9 to 2.2 VDC (although TLS is working on building a prototype for me, if it turns out well I can use that but I think I'm asking for too much from the device we choose to use).

I am very interested in knowing why you choose to isolate the laser diode from the body of the host, couldn't you just have the host common positive instead of isolated? Perhaps this is due to the driver? Do you have a link for the Lazereer ramp-up driver?

In another thread you once showed photo's of some laserglow beam expanders you purchased new which arrived with terribly scratched up AR coatings, you thought you would have someone re-coat them for you, did that happen? If so, curious who did the work and what they charged to re-coat the optics.

Hello Alaskan!
I have just replaced the two beamshot pics with better ones.

Uncoating and recoating the lens is not the best way to obtain good results. Usually this procedure uses hydrochloric acid at 100+ °C for more than an hour and this can degrade the glass surface.
The results is loss of power and an halo around the dot.
If You are interested, a company here in Italy is building for me the lenses mounted inside the laserglow beam expander. I have ordered 5+5 lenses without any kind of coating. Then I can choose what coating I wish to apply on the surface. The only problem in the LG beam expander is the small lens, and since the company is not able to duplicate it, I'm forced to do a decoating and a recoating.
Last edited: Jun 2, 2015

Very nice! Glad to see at least one of these diodes in a host without dying have you just had it sitting around for a while, or what?