Read the Q and A at the bottom.
Tactical Assault Rock from CroMagnum Arms International(CAI) NOW IN BLACK! | eBay
Last edited: Feb 7, 2013


InfinitusEquitas said:
When I was a kid, I, and all of my friends, used to have fake toy guns. At the time they actually also in some cases looked like guns, none of those orange tips, and funky bright colors.... wonder what she would make of one of our games, and us using water balloons as grenades.
Click to expand...

Yeah, toys back then didn't have any special coloring. I remember having a toy plastic dart gun (made c.1985) that was a scale-replica of a Beretta M9. The entire gun was made of black plastic with no other coloring other than some white on the interior of the barrel where the pneumatic housing was. Hell, I still have that toy on my desk.

I still want to get the Uzi that Deal Extreme sells. Then I can hold it in front of a bottle of pills with my hand out and a flashlight and say "PILLS HERE" like in Left 4 Dead. 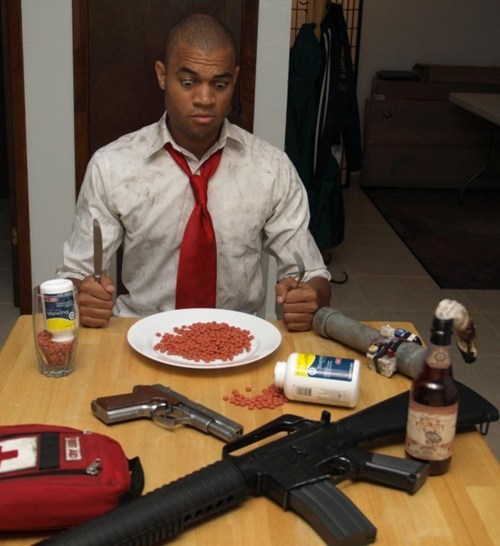 The brave boys in blue, at it again... shooting people by mistake... they will of course be punished with some therapy sessions, and "paid administrative leave" - known as a vacation to the rest of us.

And i thought the kick from my mosin was bad. Anyhow, all this gun talk is making me excited about possibly getting a mini 14 tomorrow!

bennett326 said:
cyp to continue from the other thread. im in highschool one huge building if you go outside someone else has to let you in.

my opinion, is the processes in which you go through in order to own a gun should be increased. pawn shops, garage sales, flea markets should not be allowed to sell guns. it should be mandated that if you own a gun you also own a lockable case or safe for it.

also i dont know what it should be but we should have a caliber limit. there is no need for .50 caliber rifles.

We use bolt action .50 cal rifles in Canada for hunting moose. :na:Caliber has nothing do with what is or isn't a "need".
Many .50 cals are also Black Powder. Also, a .600 nitro express is a big bore game rifle, should we ban those too... that's a 60cal hunting rifle used for buffalo
during the early 1900's.
Where does it end? You can't idiot proof the world.

Automatics should be under a restricted license. Period. People who want to shoot them should have the proper authorization for them. Banning them is stupid.
I know as a military collector I'd love to have an Valmet Hunter M-76, Vz58 (own 2 semi versions now), a Uzi-Carbine, Saiga IZ 137 AK, Colt M1911, Thompson SMG and a SAW (Belt fed).

In order to deal with violent crime, we need to stop making band Aid solutions to social problems and deal with their root cause.
3 of the worst mass shootings in US history have been as a result of untreated mental illness.
We need to treat mental illness differently and stop ignoring warning signs

Its all just razz to create a gun/ammo sales boom and it worked, even on my wife. I can't even buy the Speer Gold Dot ammo for my wifes new carry gun because they can't make it fast enough... I could not believe this .38 LCR is half the weight of my CO2 .177 BB gun

I will continue to use it for laser target practice, until it stops working
:lasergun:
Last edited: Feb 10, 2013

Thought this was an interesting idea.

It just made me laugh

I'd like to further support your opinion by this wonderful youtube clip :beer:
explaining why banning anything doesn't get the the route of the problem.
We in Canada, have been through what Piers Morgan explained, a ban on certain rifles and idiotic laws to "prevent future tragedies"...
this = a ~2-3 billion dollar waste of tax payers money and accomplished nothing except make a new class of criminal.
We are reversing this damage now under our Conservative Government.
We are getting (abiet slowly) our rights back as shooters:beer::beer::beer:.
85% of what Ted is saying I can totally agree with. the other 15% is American historical mistrust in Government/ (paranoia) which we don't really don't have. It's not part of our history. No offense to those American members here intended.
An armed society isn't an unsafe society. Look at Finland, Switzerland, Germany, and Denmark. All are heavily armed and have low firearm deaths.

Wow that was a lot of reading! I just saw this thread about an hour ago.
The bad part is a lot of people think that the "AR" in AR-15 stands for assault rife, but it doesn't it stands for "Armalite Rifle" the first company to manufacture military style weapons.

Where I live I have mountain lions walking into my yard, so do I want to just throw rocks at one that is on the attack? No I want my AR with my 20 round magazine.
What gets me about the shooting that started this whole mess is this kid killed his mom and stole her guns to commit the crime. Others have said that they knew he had mental problems, but nothing was done about it. He tried to buy a gun but was turned down, that should tell everyone something right there.

People want to talk about gun control had better take a look at Germany in 1934 when they started gun control and took everyones guns away. Look what happened there 3 million dead Jews because they couldn't defend themselves against Hitlers goons.
As we were told by Obama "not to judge all of the Muslims as bad, just because of the few extremists". But what are they doing to us with the supposed gun ban, we are being judged because of the few crazies that take guns and kill people. So now they want to take our guns, Obama needs to consider his own advice!

I have been shooting since I was 5 and have never killed anyone, I have had guns pulled on me twice, one of them is still in prison since he was a felon on parole and not allowed to have a gun. The 2nd one chickened out since he only had a .380 and I pulled out a 44 mag. "He who has the bigger gun wins".

People need to do a little research about guns and who is committing the crimes before they try to take a gun away from a law abiding citizen. Take them away from the criminals first before the legal gun owners and enforce the laws that are already on the books before making new ones.

That's really a great clip... thank you for sharing it.

Not just with guns, but in general, I'm opposed to any kind of additional restrictions.

Aside - I remember reading an article not that long ago, that the pace at which new laws are introduced from the Department of transportation, with regards to road safety has dramatically declined. The DOT is now trying to come up with new laws to introduce, to pick up the slack. Never mind that both cars and roads have never been safer, and traffic congestion has never been worse.

With regards to Nugent's paranoia/dislike for the government, I realize it seems kind of extreme, and sometimes it is, but it is far from unfounded.


00Giorge said:
People need to do a little research about guns and who is committing the crimes before they try to take a gun away from a law abiding citizen.
Click to expand...

Unfortunately that is exactly the problem. Most people aren't educated, and do not do research.

Of my group of friends, I'm easily the most versed when it comes to guns, and I consider myself to be extremely uneducated with regards to them.

Most do not realize at all, that the vast majority of guns out there are in fact semi-auto.

Virtually none understand that "assault rifle" is a meaningless title.

Unfortunately these people are a clear majority, and they are being pushed towards agreeing with disarming themselves.
Last edited: Feb 18, 2013