I'm with you on 45 acp. It really is a dream round other than the bulk it adds to compacts. But for me it shoots as clean and easy as 9mm. I have small hands so as I said beforem .40 cal and of coarse 10mm are not a good fit for me.

I buy my ammo mostly from CTD. They have the best prices I have found but like everywhere get sold out for bulk ammo. In fact Im swapping barrrels on my AR from 300 BLK to .223 because although there are now affordable 1000 round bundles of 300 blk the wait time is killing me. On ideal weekends I shoot 500+ rounds and have been on a 7 week hold over due to ammo lead time from Ozark. 1000 rounds for $400 seemed like 300 blk was now an option for steady training but this is getting frustrating.

I choose 9mm for comfort but also because I have the MPX. So when BLK is out of stock I can still train primary and secondary drills with my sig and Glock. I love the MPX but the Marine in me always wants to improve my skill set with the AR platform.

Im fortunate that my best mate is a retired Force Recon veteran who has been such a wealth of knowledge and helping me improve my skill set but the ammo cost is like other sports I have dove into is significant. But with our schedules not always aligning although we try for weekly days in the forest it often is once or twice a month. Bench shooting is fun but adding movement and primary to secondary drills, malfunction clearing, tac reloads ext is an absolute blast.

I bought 3 free standing target stands and a 100 pack of Vtac targets. If you haven't seen these targets google them. They are pretty cool. They have the standard milspec silhouette box man but then a photo realistic water mark human skeleton inside the box so you can see where you rounds are hitting. Helpful on pelvis shots and such. Link here
http://www.challengetargets.com/mm5/graphics/00000001/VTAC-P-1.jpg

Spent sometime at a shooting range a couple of weeks ago. Really can't say which of the two I prefer more, the 1911, or the glock 19. With either I can hit the center X circle at 30 feet. 1911 feels more comfortable, but the added capacity of the glock is hard to overlook.

Wasn't sure whether to drop this into the Win thread for the robber betting taken down, or the fail thread for that spectacular one handed gun knife technique, so here it is.

I call that a win myself. He sure took care of that robber.

:crackup: As soon as that fool broke out the knife to go with the gun, it was pretty clear he had no idea what he was doing. The Transformers mask adds to how ridiculous it is. Glad that customer got him.

That said, several people in the fast food industry I know have had to deal with this sort of thing, so I feel bad for them.

Yep, definitely a win for the good guys! :yh:
It's probably a good thing that an employee didn't step in and help, since they would be fired for violating company policy.

I wonder how the robber is doing?

I'm glad a lot of these bad guys are so very stupid, but that goes to figure.

I haven't been following the news as much as I used to, but with what happened in Vegas recently, feel it's worth bumping this thread.

We already have a Vegas shooting thread, this is not the right place for this discussion.

RedCowboy said:
We already have a Vegas shooting thread, this is not the right place for this discussion.

Here's a nice pic of some beautiful craftsmanship, otherwise known as "gun p0rn"! 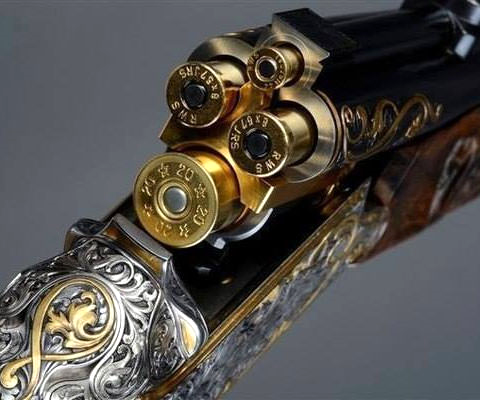 Guns arent the problem. People are

Can't say I disagree. But before you post please check the date of the last post. This thread has been dormant for 8 months.
Also as you are new here, please introduce yourself by creating a welcome post in the welcome section.

RedCowboy said:
I'm glad a lot of these bad guys are so very stupid, but that goes to figure.
Click to expand...

This is a very lucky thing indeed.

If you had a couple of biochemists going for maximum casualties of an attack they'd be discussing if it "success" should be a million or a billion, not 1000 or 100

It's fortunate that with greater knowledge and ability also comes perspective. To date 9/11 remains the worst terrorist attack, and though it is tragic it does give me some hope for humanity that nothing worse (terrorist related specifically) has happened in the US or Europe.


Guns terribly inneficient in the scheme of things. Even medium sized trucks have proven to be more deadly, and certainly IEDs.


Of the various forms of weapons I'll be the first to admit biologocal weapons scare the hell out of me far far more than any other.

Getting back on track though, Imho, the reason we keep seeing mass shootings is that we've made them popular. The media is mostly to blame, but it does not operate in a vacuum, and just shows what people want to see, and consume. So long as the killers are glorified by having their faces and names plastered all over, things won't change.


I do love seeing that as of late there's more of a trend on the heroes in these tragedies, and on the survivors. An aspect of that, that seems to be largely ignored, is just how many lives have been saved by people, teachers and students, with zero training, just their wits and bravery. Having an armed security guard or two, or ten, or making kids wear clear backpacks, and go through metal detectors won't help. It might prevent a few idiotic attempts, but in the larger scheme of things more focus is needed on perhaps arming some teachers, and training students in basic self defense.
You must log in or register to reply here.
Share:
Facebook Twitter Reddit Pinterest Tumblr WhatsApp Email Link