Purchased these two budget LPMs in early 2018' and now had them for more than 3 years, and thought I would share how they stack up and show the damage to the sensor area, after numerous years of use' - as I did also took some pictures while they were quite new and been lazing them with all the NUBM & NUGM diodes I got and I love the cheap nature of the tool when you using high wattage laser diodes.
so numerous NUBM A0, 05, 06, 07, 08 & NUGM3 + a lot of handhelds and OEM labby's.

These two LPMs were the absolute cheapest ones I could find, as I was sadly not fast enough to pick some of those NOS Ophir head back in the first half of the 2010s when these were sold at very lucative prices
But so far I have been very impressed with these two budget LPMs - as long as I have the price in mind - I have also taken my obvious precautions not to make an edging or pinpoint-beam spot on the sensor as it goes without saying that "cost-cutting corners" are cut as hard as you can' at these prices and also use one of these 1 USD rubber blow-devices' intended for lenses & camera sensors to simply remove dust on the LPM sensor-area as otherwise, intense lazing beams will tarnish it onto it. (all in all been careful with it)

I will use this thread to show the readings I get and if they are somewhat loyal, and on which diodes I clock them, and when possible show the voltage & ampere and hopefully that can put their performance into perspective, so please holla if there are margins that stands out and looks accurate or way off.
though on some of the older cheap Chinese handhelds from like 7 years ago, that Im testing below. I don't know what LDs are in them, if you do please share.

I paid a tad under 35USD for each with shipping from the Store Laser Pointer Store more than 3 years ago, but that price is not representative, to what I can see they are being sold for afterward and I guess the store owner was in a good mood, as I contacted him by the store email, as the normal customer I am, and stated that I wanted to purchase one of his new small LPMs (I reckon they were called Tornado) and he informed that the maker of these was ending their production' as the Pocket units with inbuild battery was obviously more convenient.
He informed' that he got a few ones left and if I purchased one of the battery-units, he would throw one of the last few units' in my order, - that offer I jumped on and been grateful that I actually have two units to take readings with.

I went for the green 7segmented displays' on both units for the high visibility, and I can read them clearly also with anti-green lazing glasses on, though it obviously takes some of the visibility.. overall been happy with that color choice, and here 3 years down the line, if I should screw one of these LPMs up and fry them, like fx trying to datalog from it (on the fly) in the hope I could graph it out in actual use.. - I would look into getting one again..and that does say a lot after having them for 3 years. 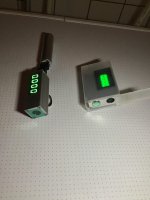 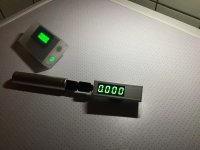 The battery units were 79USD normal price AFAIR, and the LPS store owner informed me that the price could get down to 69USD as there was a store-function implemented' that lowered it another -10 USD if you included any laser pen' - and it also included the ones to fx 2½ USD. (Gotta admit' very solid behavior in my book from a seller' when the store-owner informs the customer, on how he can save even more money, just after he just handed out the above LPM offer)

For the laser-pointer, I decided to go for the 50 USD 488NM stubby (with an included 18350 battery that is of surprisingly decent quality in my few amp load testing of that cell, it is usually almost straight-out-defective-batteries that are bundled with laserpointers, so way better 18350 cell than the norm., -
Concluded that 50 USD for the 488NM stubby was not too far from what the 488nm diodes back then costed in itself.
The 488nm 1x18350 stubby and some beam shots..(it peaks at 69-70nm on the Pocket and 72mW on the Tornado.. the narrow Tornado often comes in a tad higher than the Pocket-unit with inbuild battery. 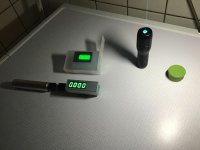 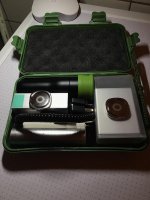 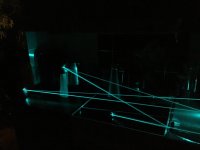 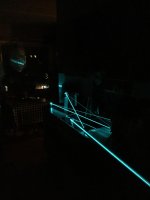 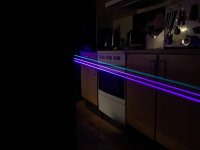 It looks like my final price for these 2 LPMs were around 33USD each' as there was also some site-coupon and cashback that took it down a tad further
they are not the same componentwise as far as I can tell.. the smaller unit often feels a tad faster in peaking. (Tornado)
though the battery unit which I believe goes under the name Pocket Laser Meter seems to have a faster display update rate' also not the same 7segmented displays that are used.
The Tornado updates 4 times per second.
Pocket meter updates 5 times per second.
Can be counted below on the YT vid if you put it into 0.25speed. 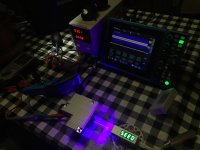 Here is a look down at the non-battery unit.
The sensor head' rests on what looks to be a block of aluminum to heatsink the sensor and the circuit board rest on the back housing on the right just behind the display, though with some isolating non-conductive material underneath.. Looks to be at least two pods as far as I can tell.. the used cable wires were of good silicone materiel' as I recall.
video

Here some pictures of the sensor area, while they were somewhat new (these pictures are taken in the first ½ year after I got them and is a good comparison-benchmark to the pictures I took yesterday after 3 years of use with numerous high wattage NUBM LDs, where most still had their native ball lens on, - and on some a thin aggressive beam profile even at fx 7 or 8 meters.
like fx NUGM3 or NUBM08 here below at 7meters. 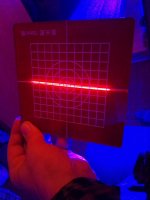 Sensor-area' when they were almost new (under ½ year old) 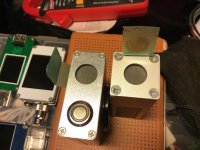 
Here is an LPM-test with an old laser pointer I made.. (many years ago).
Recall it's a 5.6mm diode from Techhood, likely an Osram LD and the driver was these very cheap ones from eBay that I adjusted very conservative for long run-times...
the hosts were some China-ones with surprisingly much aluminum-mass versus my paid price. and that I purchased from a factory in China that was willing to sell them partwise for next to nothing' with close to no shipping cost. (love lasers and fascinated by this beam of massless particles and can often find myself just sitting and watching these lazing beams while trying to comprehend' what is going on on a particle-level, but it can also be very expensive hobby' if your not on a strict budget)


Here' with one of these cheap 445NM laser pointers from China (were one of my first blue laser pointers 40 USD incl. shipping on an eBay auction in 2014, and it still works great)
1322mW and 1316mW

LPM Test with some old labby's from China 2015/2016 - 55USD# incl delivery to Denmark from the Chinese wholesaler Banggood (# on sale).
They were both labeled & sold as 2500mW units and it was the same listing i got both from, though with 4 months difference in purchases.
Looks identical from the outside, with an inbuilt driver.
but clearly not packing the same diode' the first 9mm and the latter 5.6mm.. (got no idea of which name/model they are)
One looks like it is in a cobberhousing and the other in brass, judging by the inner housing.
The power is from one of these QC / PD powerbanks with adjustable barrel DC from 3v to 24.6v with max 90w output that I use for most of electronic gear on the go, like Laptops, quadcopters, and even lasers.

An LPM test with a Nichia A0.
With the Pocket Meter with a linear bench PSU. 6225mW

The non-battery unit (Tornado) often comes in a tad higher 0.4%
Tested at the same time with the same PSU. 6259mW
The same differences I see on lower wattage, that the Pocket meter often delivers a lower reading than the Tornado.
On fx the 488NM stubby.. I get around 69-70mW on the Pocket Meter and 71-72mW on the thin Tornado.

Will test with numerous well-known diodes and different wavelengths and try to have the voltage and ampere present while doing it, as that will give a good indication if they perform somewhat loyal and in the ballpark where one would expect,

- at the end of the day, I did not pay a lot, ao my perspective is grounded in what I paid as a plain buyer. - and so-far these last 3 years' its been a pleasant experience, but let's see how they perform in other wavelengths, as when it comes to the blue'ish spectrum they are not bad at all for something this crude, and the results I been getting in other wavelength has also been in the expected ballpark, though I do recall I got a lower reading then what I expected on a red diode a few years back.. but it was in housing-rig (the one below as I recall)
- it was an 5.6mm Oclaro or Misubitshi and these red LDs that can peak not far from 1W - but it was in a rig, so did not look that further into it, but do have a new 9mm 1.2w red diode, that I will test with the linear PSU and see how it stacks up.

Same with the sensor area..- present versus what they looked like when I got them, as I am starting to see some minor glorying on the Pocket unit' that I been using the most as it is very convenient, and I love that you don't need a power bank and it holds power for ages, though when its finally starting to get very low, I reckon it can fluke the reading like you alos see on some DMMs and on the Pocket LPM you don't get any notice but it's pretty obvious when it does, but there is no significant drainage of the LIPO cell, so I reckon it can be in storage for years and it consumes very little in use.
Will take some close-up macro shots with "before and after" on the sensor area and also some video with a thermal camera in an attempt to display how the sensor-area deflects the heat on the sensor..

If an aspect of sensor-degradation is to be expected after numerous years of use' with high power lazing-diodes, which in my case are just under 7W and where many still have their ball lens on.. hmm likely I guess, - particularly at these LPM prices where they need to cut many corners.. though the actual readings are exactly the same, and there is no differences' when I check with my readings years back and remember to have the batteries in the same voltage-ballpark, as different battery-voltages will fluke the reading if you're trying to compare 1 to 1 ' to sense any drift or degradation on the sensor. 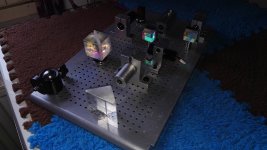 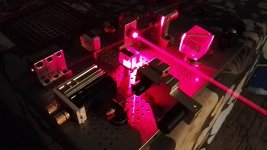