This is my first Sanwu laser (or any high quality, non-ebay laser for that matter) so it would be nice if somebody with more experience with their lasers, especially the Pocket series, could tell me if this is normal operation or not.
My gut instinct is telling me this isn't normal and that I've got a dodgy unit. I've watched video reviews and seen pictures of other people's Pocket series lasers and haven't noticed the same 'ring' being projected from their lasers.

I've taken two pictures. One with the lens screwed all the way on and one with the lens removed altogether. The strange 'ring' does not move at all while unscrewing and is even still somewhat visible after removing the lens completely.

I did email LaserPointerStore (where I bought it from) and they've then emailed Sanwu who have said it's "the Refracted light from the front part dust-proof lens". This isn't particularly helpful though as I'm not entirely sure what they mean by this. They also told me to "adjust the dot to a small one and see how it will be" which also isn't helpful considering the 'ring' leak remains regardless of how far the lens is screwed/unscrewed.

Can't see your pics, but try cleaning the diode window
A

Also, I have already tried cleaning the lens. Is the diode window the part attached to the laser, underneath the lens that unscrews?

Also, I have already tried cleaning the lens. Is the diode window the part attached to the laser, underneath the lens that unscrews?
Click to expand...

That is absolutely normal and mostly based on the lens they are using, Diode output shape and focus ring shape, most of my builds do that.
G

Nice to know this is normal behaviour. Was concerned I'd have to end up going through the hassle of sending it back to china.
E

If you send it back, the next one might be worse

Arstulex said:
My gut instinct is telling me this isn't normal and that I've got a dodgy unit. I've watched video reviews and seen pictures of other people's
Pocket series lasers and haven't noticed the same 'ring' being projected from their lasers.
Click to expand...

Your gut instinct is correct. That output is not normal for a Sanwu Pocket 150mW 520nm based upon reviews below of other examples of Sanwu 150mW 520nm Pocket lasers if it is the same at greater distances Return it if the output artifacts bother you.

Not sure what the problem is. Maybe laserpointerstore buys "seconds", or is a return or a fake-- who knows with them?
If it was sent me it would go back immediately and I would ask for a not defective or malfunctioning better example of a Sanwu Pocket laser with a clean output. If a better functioning example is not available then request a full refund.

Just ignore comments by people that do not own one and are just imagining it is normal based upon opinions and conclusions formed on the basis of incomplete information and no experience with a Sanwu Pocket 150mW 520nm.

It is not normal compared to the photo of one in this thread: https://laserpointerforums.com/thre...r-tri-beam-guardian-150mw-520nm-pocket.99720/

It is also not normal and nothing like the output in this more extensive video review with a lot of "dot" images:

Before you ship it back, see if cleaning anything helps. Again, I don't know enough about the pointer to rule out the possibility of some sort of inside reflections causing the ring (maybe the diode is mounted too deep?)

If you can fix it yourself, that would be ideal as I know sending a laser back for repair is just the worst (2x shipping wait, no guarantee of success, etc.)

That happens when the lens diameter/aperture is too small compared to the divergence of the diode. A poor matching which I see way too often here, and it could so easily be avoided if lasers stopped using lenses from 10 years ago.

Okay so I've been talking back and forth with Laserpointerstore and they have told me the following...
(I should point out this is the 50mw version and not 150mw, just incase that happens to make a difference.)

"We understand your concern.
The laser was purchased directly from Sanwu lasers, we didn't open the laser and they also gave us some accessories and we gave them to you too.
We have communicated with sanwu tech person and their suggestions is to clean the lens or adjust the dot, they have provided the cloth. it's not a defective unit.
We have experience the leaking light on other low power lasers. like 532nm green laser, I would say it's a little bit common, especially for those using optical lens. and this laser has 2 lens, which will increase the leaking chance.
Thanks."

From what I can tell they are telling the truth about it coming directly from Sanwu, based on the packaging and contents being exactly the same as those seen in video reviews and such. The laser was also perfectly sealed when it arrived.

I have cleaned both sides of the lens with isopropyl and a mixture of q-tips and a microfiber cloth. Nothing changed as a result of that. They keep saying to 'adjust the dot' but I'm not 100% sure what they mean by that as twisting the lens holder has zero impact on the leaking light. I have not touched the end of the host (underneath the lens holder) as I'm not exactly sure what I'm dealing with there. Looks like the end of the diode if I'm not mistaken.

If I had to guess, the ring seems to a result of the 'elliptical' shape of the beam (that you can see in my second picture) reaching the inner edges of the lens holder which, due to the host being shiny stainless steel, is being reflected out at an angle instead of absorbed. Please see this crudely drawn image as an example of what I mean. 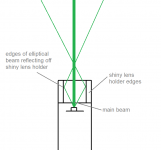 It could genuinely be a byproduct of it being a low power laser, since the versions seen in reviews and such are the higher power 150mw version.


Also I would like to make it clear the the 'ring' effect isn't as bright as it appears in the earlier images. I took them in a pitch black room with a sensitive camera. They were only intended to show the shape of the rings, not how bright they are.
Don't want to post misleading info is all.

This is the issue as I have found it: 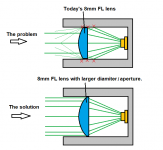 The only simple work-around until better sized lenses and holders emerge it is to swap the long focal length lens with a short focal length, but at the cost of higher divergence.

Your new Sanuw shouldn't be doing that, it might have the lens in backwards, have you tried turning it around ?

For your own builds you can use a shroud to soak up wide cast aberrations, a length of rolled up black card stock works well. 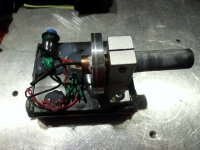 RedCowboy said:
Your new Sanuw shouldn't be doing that, it might have the lens in backwards, have you tried turning it around ?
Click to expand...

Good thought RC--might be the problem.

The "circle" should be less pronounced with the lower output 50mW unit than in 150mW unit.

Laserpointerstore is full of donkey dust and just blowing smoke your way.
The Pocket laser comes standard with one 3 element lens. Does not have two lenses. Ask Sanwu.