paul1598419 said:
I would never use alligator clips, but I do have transistor sockets that I use for the connection. This might not work well for 5 amp diodes, but for these new Sharp diodes it works just fine.
Click to expand...

Yeah, but you do this routinely so i think you can build a reliable test jig for things like wavelength binning

I just hint on making electrically solid connections for beginners, and if it doubt just solder the wires on already. Surely this is not practical when binning hundreds of diodes, but if you only have a few to work with i think it's a worthwhile precaution.

ALL current sources (with nonzero output capacitance) "go well beyond their current limit when the connection is restored" - not just bench power supplies.
Click to expand...

Obviously, but the ones that require you to solder the diode on there before being able to power it up prevent that problem. I would not be surprised if numerous laser diode drivers actually killed diodes if you connected them after connecting the power supply, the main feature is that this is often near impossible to do unintentionally

Oh, I have a NUBM44 diode I am going to use in a new host with an optical bench for cylindrical lenses and it will be soldered wires that go to my power supply as I set up the optics at a much lower current than I plan on running it at. I don't use transistor sockets for everything. Just when binning many low power diodes. And they do work quite well for this. No one wants to see tinned pins on a new diode.

Yeah, I can see why that would make them look like refurbs taken from used equipment or something like that.

Those transistor sockets are a perfect match in terms of dimensions though, so should make a reliable connection without soldering, at least it something that is not subject to mechanical loads (i wouldn't use it in a pointer, but for a test rig it's fine).

As for having the leads tinned - i'd probably take your word for it really myself, and not bitch about it unless you put leadfree solder crap on them that i'd have to get rid off

Cyparagon said:
What idiot wrote that? Yes, there's usually some residual voltage with a zero voltage setpoint, but it's on the order of millivolts. maybe up to around 700mV if it's really bad. But it doesn't matter how hard you try - You cannot kill a laser with millivolts, no matter the current behind it.

be back later w/ the white paper on diodes and destruction of them...

I don't care if he's a stranger. If he thinks a few dozen millivolts will kill a laser, and was confident enough in that nonsense to write it in a book, he's an idiot.

Hey Guys.
Acquired some linear bench PSUs numerous years back (#1) and reaching the limits 5.1A on some diodes were I would like to go a tad higher as my voltage on some diodes' is still quite low and looks like there is more optical-gain. and wondering if you can daisy-chain these to double the ampere, and a feature that usually are the norm for linear bench PSU that are multichannel. (like 2 channel bench PSU were each has a 3A limit and then you can take advantage of both channels and reach 6A)

On some, it is done by software and literally programmed into the menu system and on some crude variants, you need to' as I recall to ground-reference the channel or negative them? (unsure about this part in particular)
Somewhat unsure if I can do that' with the 2 Korad units I have, as they are not equal models in amp-power 5.1A and 3.1A.
Both are 230v Korad Liniar bench PSU with computer USB-control interface (P variants), one is a 31v 5.1A and the other is a 31v 3.1A model, so if you can put the amp in series, I should be able to reach around 8A. (5A+3A) - is it doable with my units?

Really don't wanna "try & error" with 230v mains-voltage, so if anybody has some info' if this is doable or been down this road, please let me know and how I proceed. (thx)
It's these two linear bench PSU. 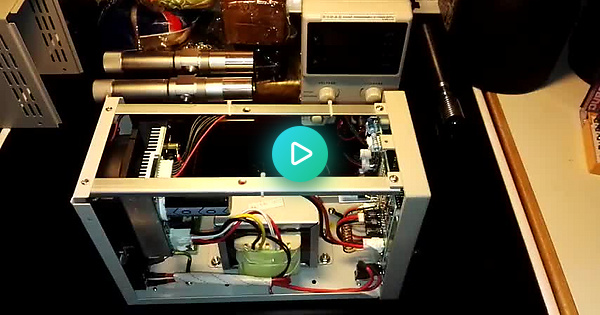 Imgur: The magic of the Internet

Yes, lab power supplies can be paralleled for higher current or series operated for higher voltage, just like batteries can. Some have interfaces that allow master/slave operation so one controls both, but you can just hook them directly together instead. It is not harmful to back-feed voltage into a PSU. For instance if you have them in parallel with one set to 5V and one set to 0V, the output will be 5V with the 5V PSU supplying all the current, and the 0V one sinking a little bit of current. You may want to practice on a test-load if this control layout doesn't sound intuitive to you.

Of course, if PSUs are mismatched in voltage rating, they should be only parallel-operated at a maximum voltage of the lower-rated supply. Similarly, if PSUs are mismatched in current rating, they should only be series-operated at a maximum current of the lower-rated supply. This also cannot be done to increase voltage indefinitely. A common rating is a maximum of a few hundred volts referenced to ground, but it depends greatly on the supply.

Thx Cyparagon for your input.
I been fooling around with it, here yesterday, and so far haven't blown anything up, that's always a good start,
I Am left with the impression that It's preferred to have one PSU in CV and the other in CC when doing parallel, as a general preference.
but in my testing even though I tried to adjust for this by keeping voltage a tad higher on one bench unit and current lower on the other, I often found them both in CC.
Any risk factor in regards to the PSU to have them both in CC
Though have not tried with diodes yet, it was primarily 50w and 100w resistors, and trying to get familiar with it..
The "series" in regards to voltage' was quite straightforward 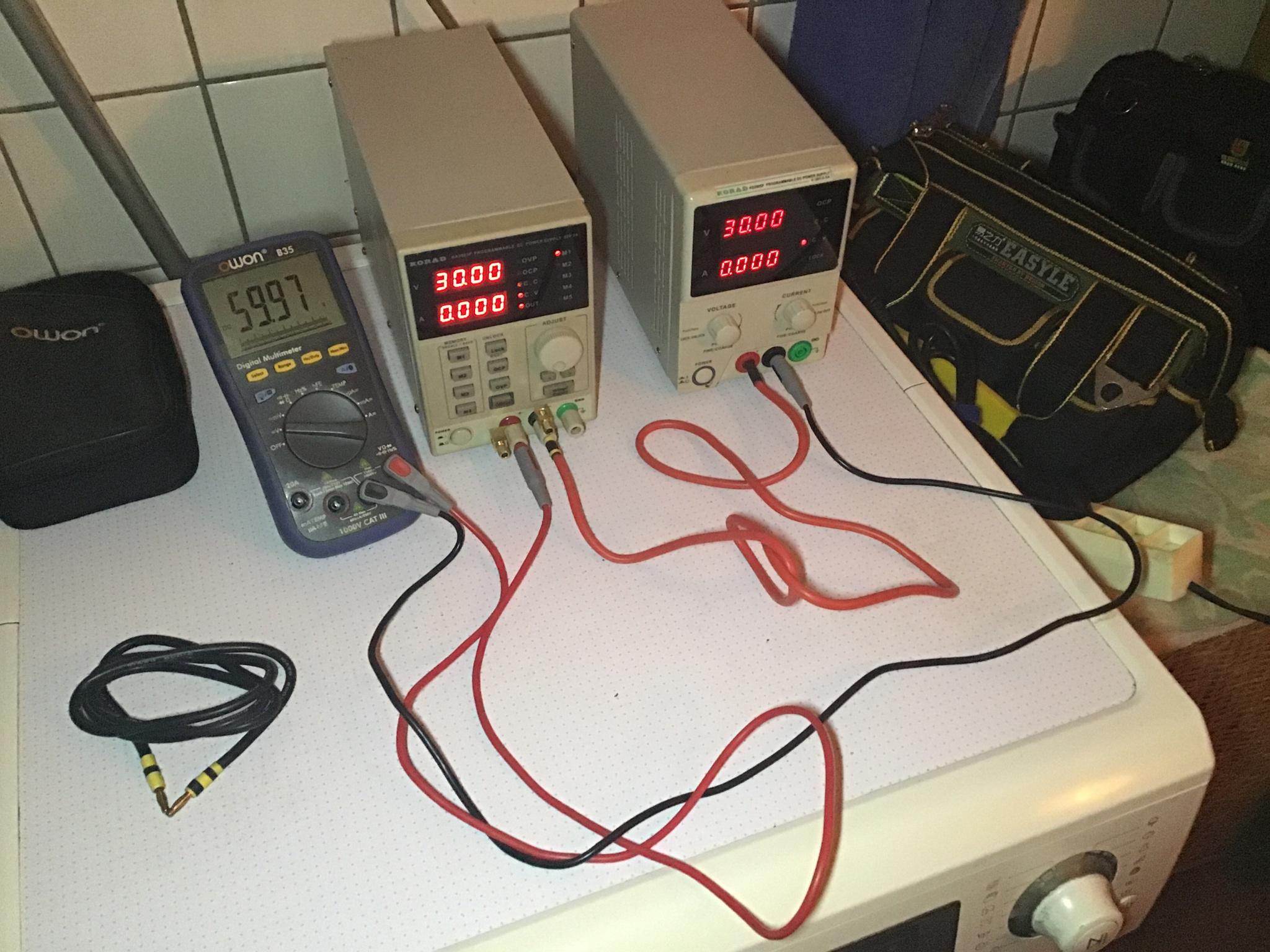 parallel with around 6 amp. 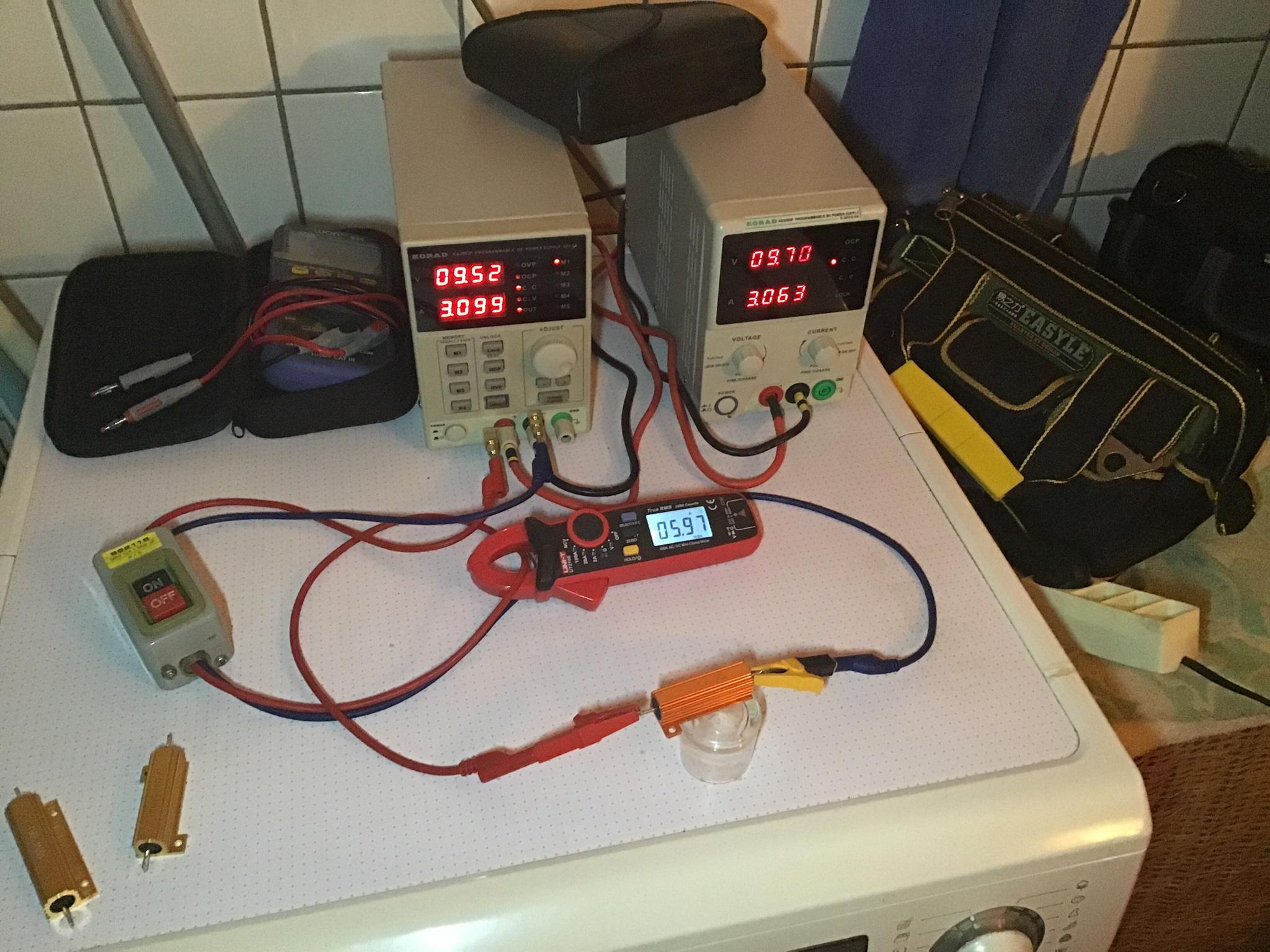 When I have a mismatch in one unit "max-current ability" between these two linear Korad-PSU, like in my case where one is 3.1A and the other is 5.1A (though both 31v and both same brand)
-and then doing parallel.. I notice in a brief moment that the setup was willing to go quite above and reach 3A on the low-current one and above 4A on the PSU that is 5.1A rated and thereby reach 7A. - what risks are there with going higher on one unit in regards to using the lowest one (3.1A) as a max current reference? (are there any kickback risk from the full output into the lesser or are you overdriven the lesser to some extent with the higher current of the other) 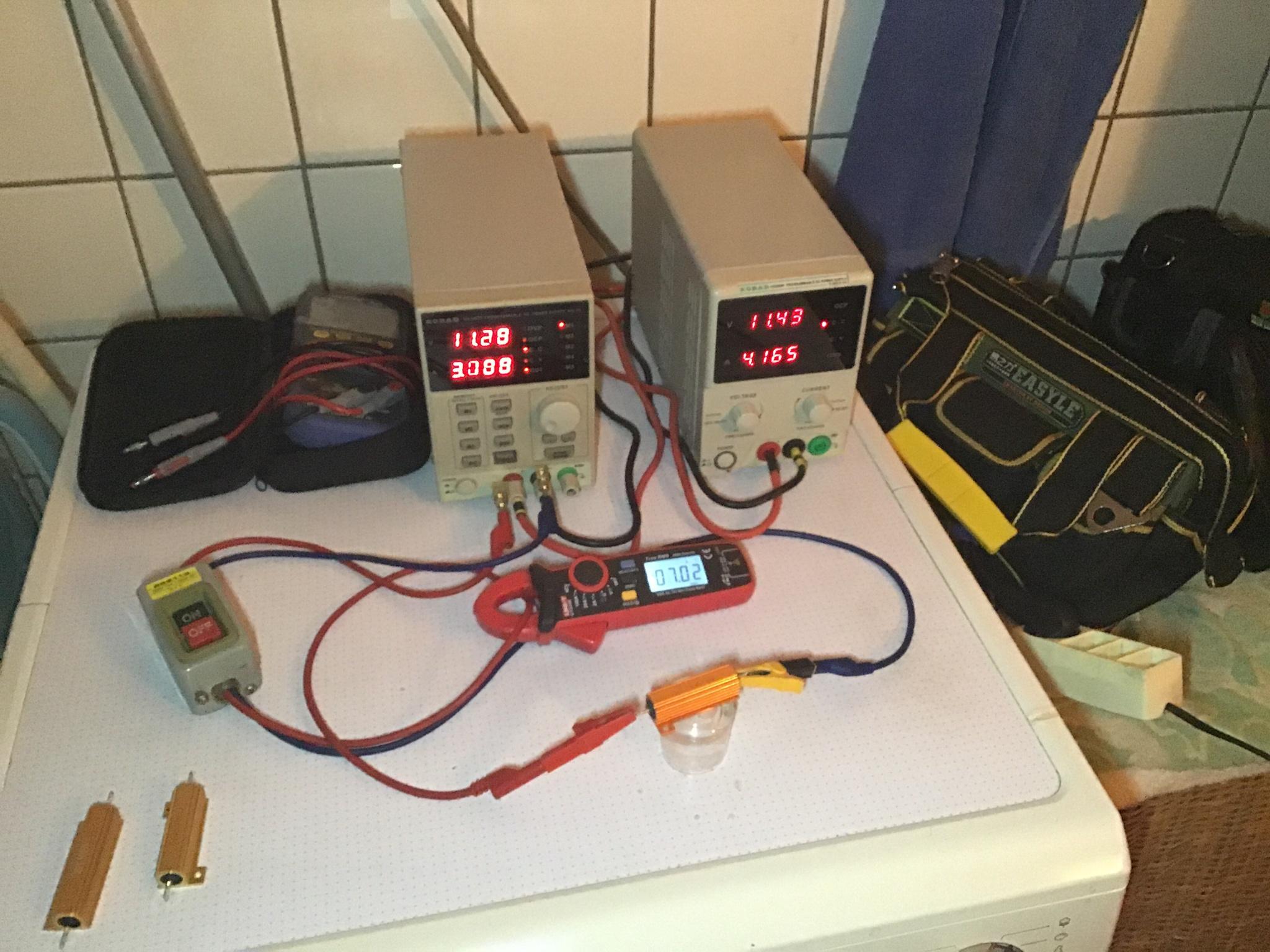 picture slide of one crude mobile-setup on top of the washing machine. (huh' don't judge, sadly no lab-bench-plateau here)
Picture-slide

Will try to put a scope on it, and see how the current and voltage-waveform & overall noise looks with these set-ups, before hooking up a fragile diode even though some diodes are becoming more forgiven.

But this is certainly not my alley, so mostly just trying to learn as I go,. 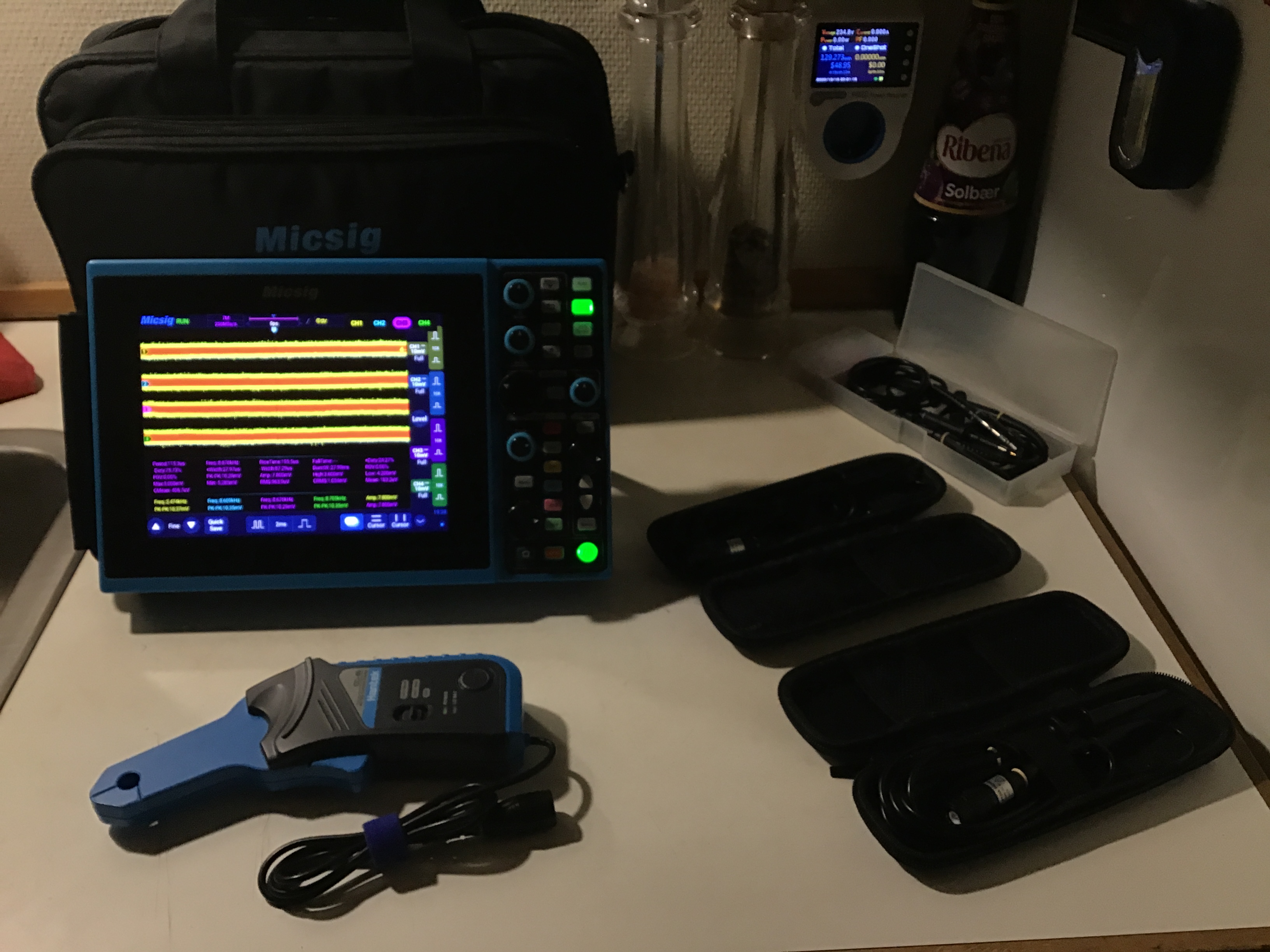 Your setup is fine. Current-capability mismatch doesn't matter for parallel setup. Having one delivering 90% load and one delivering 10% load is also fine.

Noise (in theory) adds with √2 if I recall. So if one supply was 5mV p-p, two supplies should be close to 7 mV p-p


Enchilada said:
I Am left with the impression that It's preferred to have one PSU in CV and the other in CC when doing parallel, as a general preference.
Click to expand...

That depends on the load. You can't have either in CC if the load is very light, and both will be in CC when driving a short or a laser diode.

With a more professional setup, what actually happens is the current-shunt measurement of the 'master' is amplified/scaled (often to 0-5V, but it depends) and sent to the current-set input of the 'slave'. In short: current-sharing. In this case, master is usually in CV and slave is usually in CC, but this too depends on the load.