So here's another 07E build that I put together that I will include some simple build steps for that are not in depth.

Here's the SXD-V3 driver heat sinked with a thick chunk of copper. The actual Arctic Alumina adhesive is very thin between the 5A driver and the sink but there's extra to make sure they are really stuck together as the sink weighs way more then the driver: 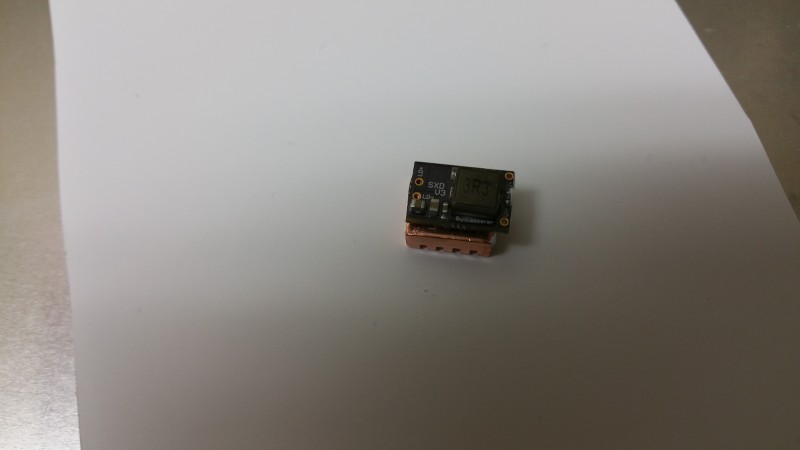 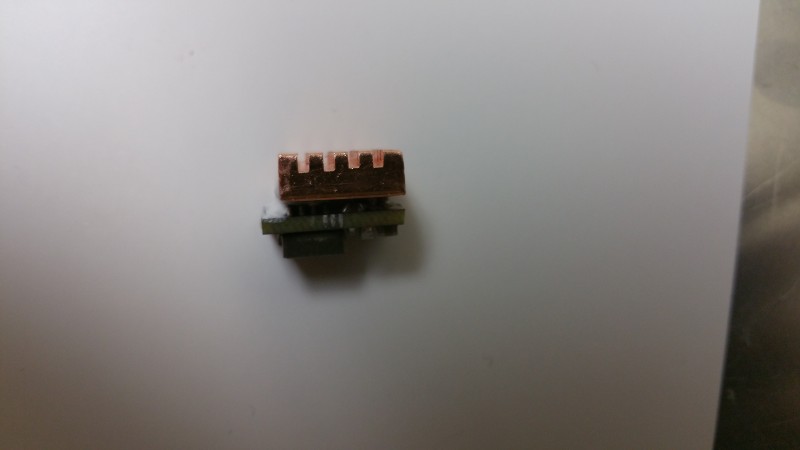 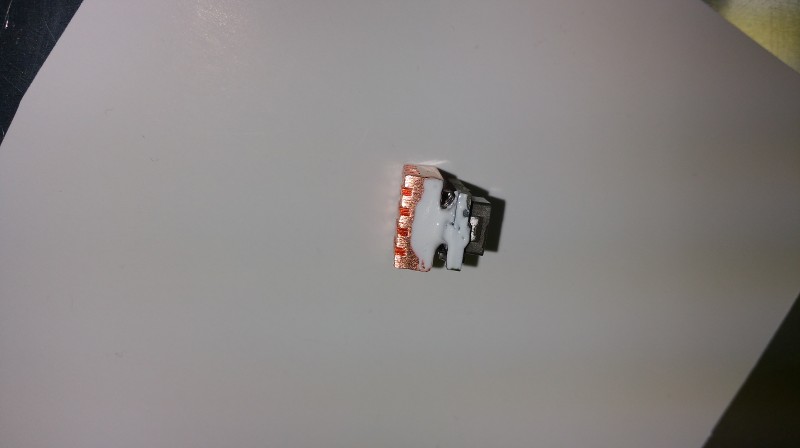 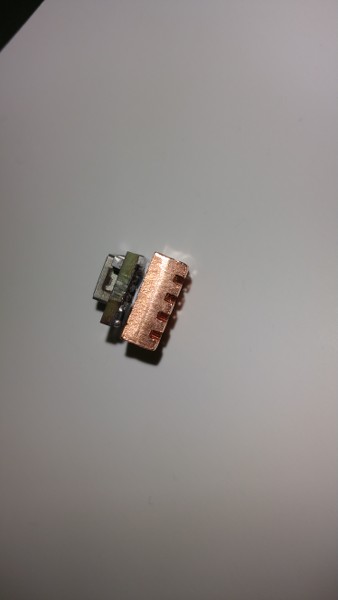 Diode is pressed into the copper module with a full back half and I will say I did not enjoy having to remove the g-ball/can: 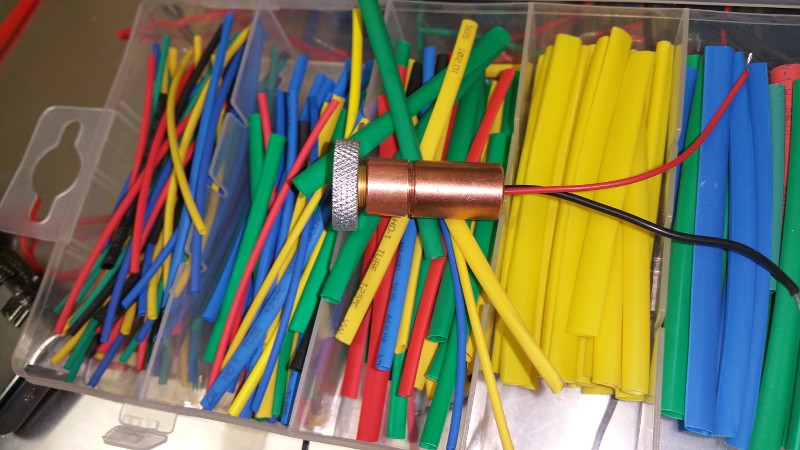 I pressed it into the heat-sink with thermal grease and then used Arctic Alumina again for 2 things. I used it to attach another full back half of copper and to make sure the module didn't move because something was wrong at the end of the sink as the threads would not allow the set screw to screw in to hold the module in place. I trimmed down the lip on the one side before I wired the diode to the driver: 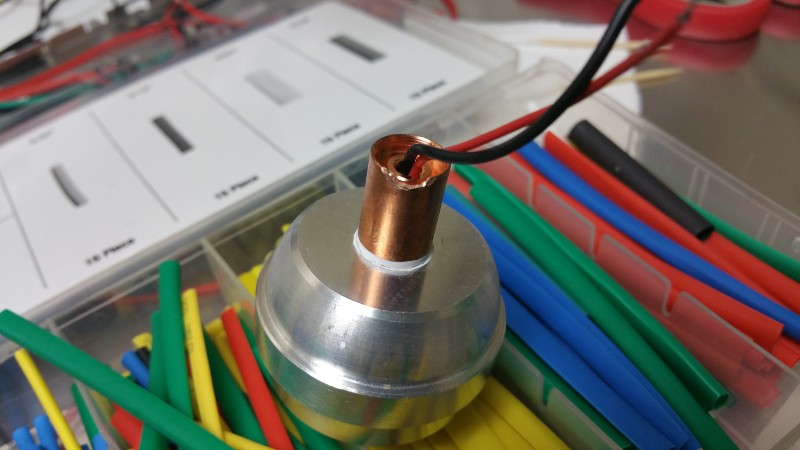 All wired up and you can see in these pics that I added extra sinks that touch both the back half of the main aluminum sink and also the extra copper back half as there was lots of room left in the host: 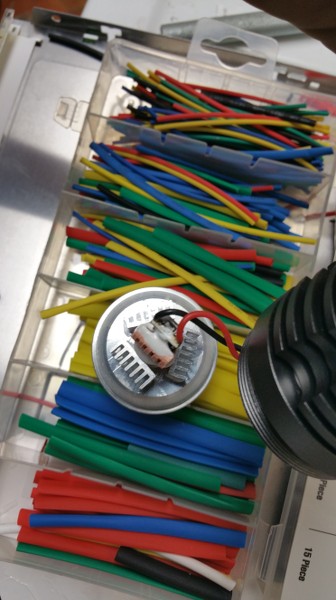 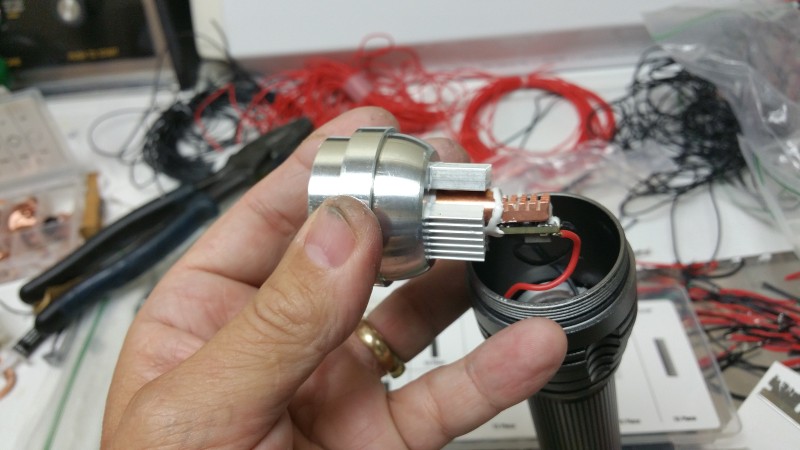 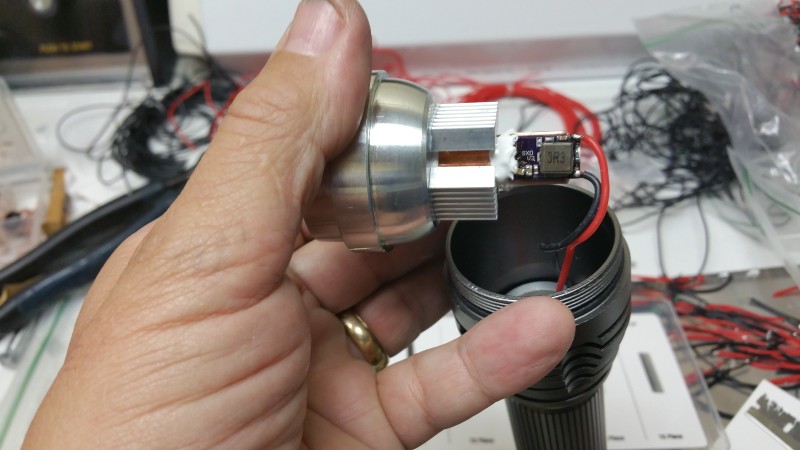 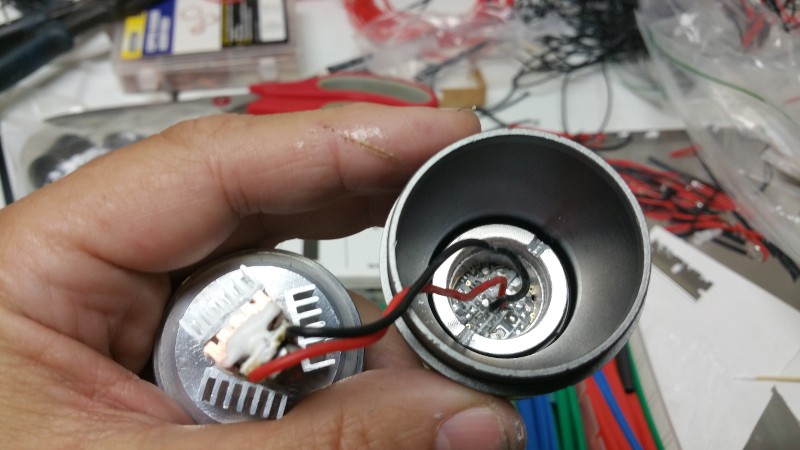 Finished laser labeled. Should be about 471nm. 5W+ 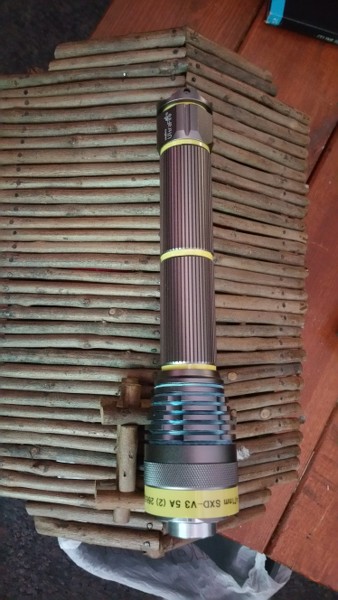 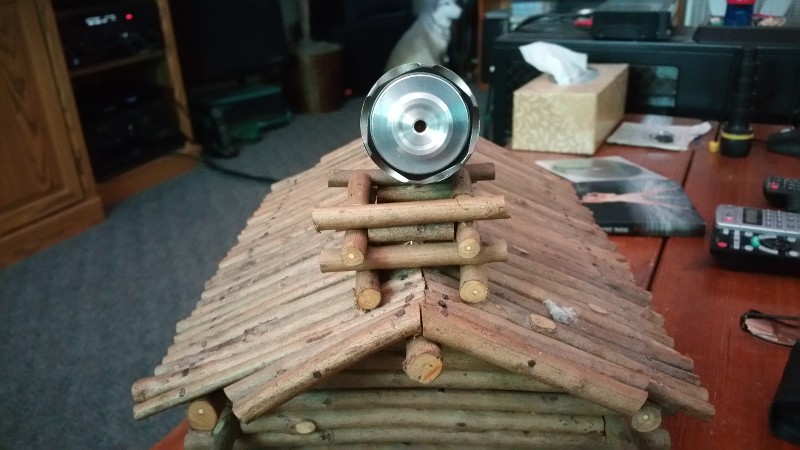 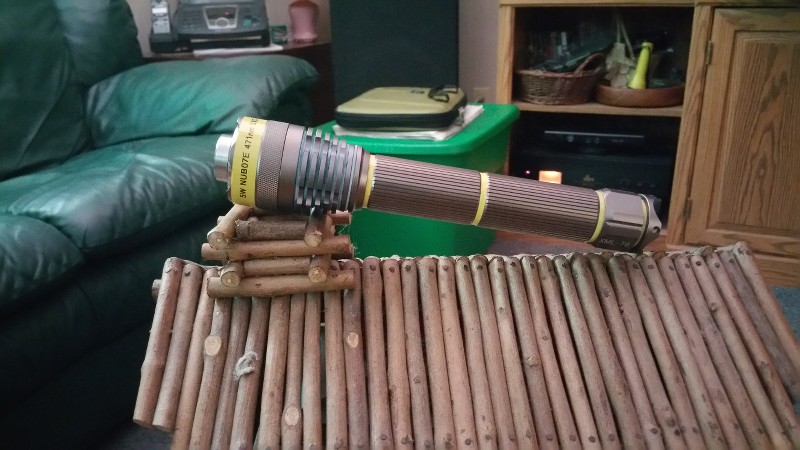 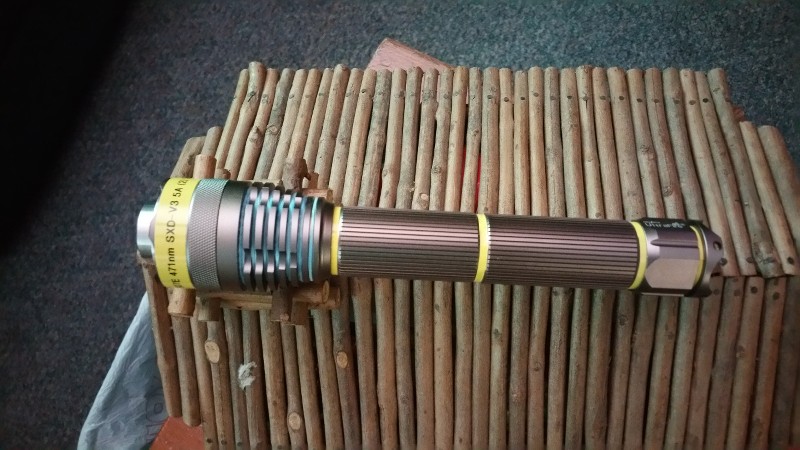 Here's a rarity. A Pman laser outside: 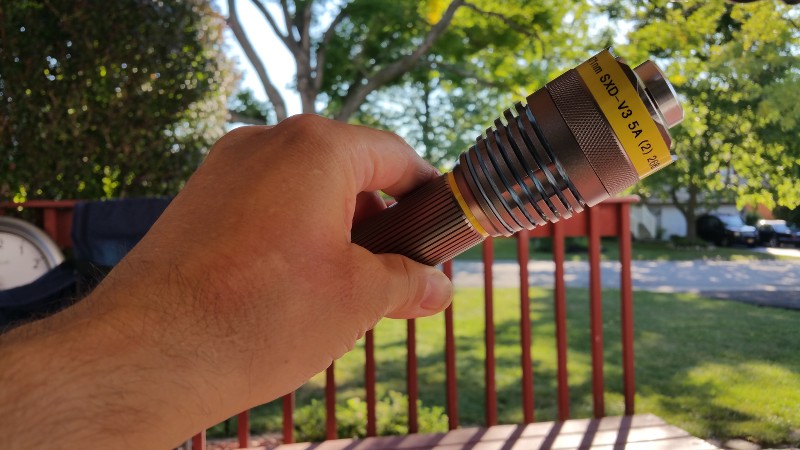 Lots of light out still but there's the beam: 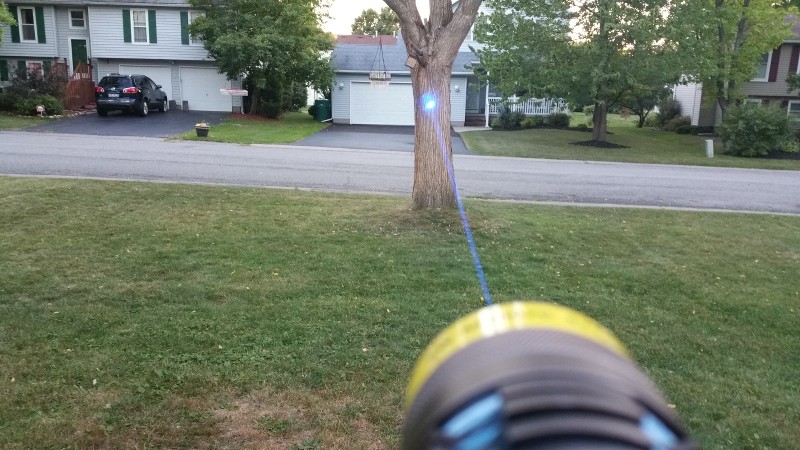 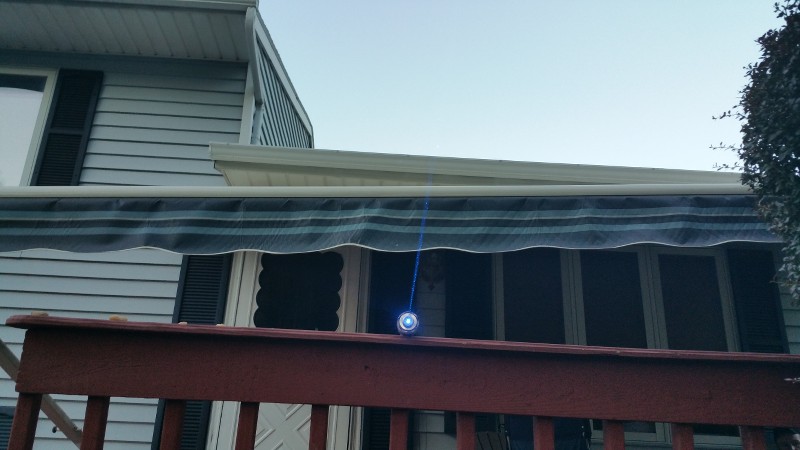 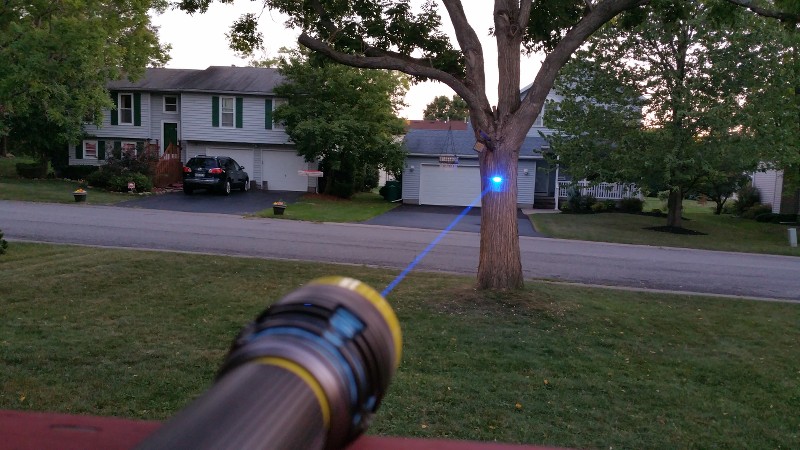 Sun is basically down. See how the real color is starting to show now: 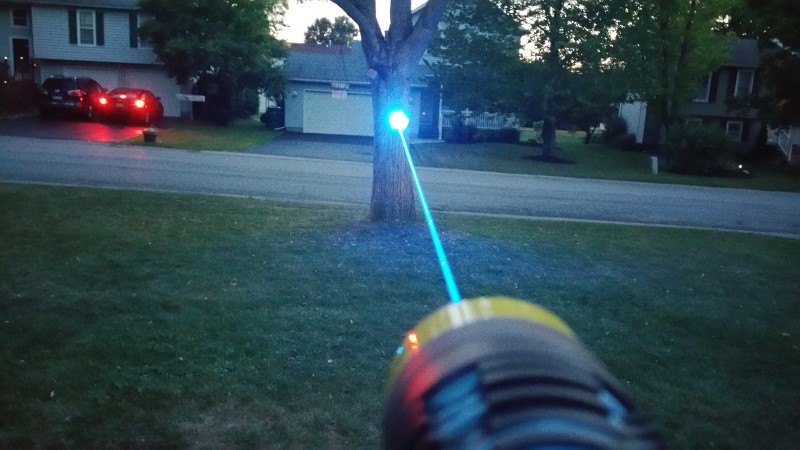 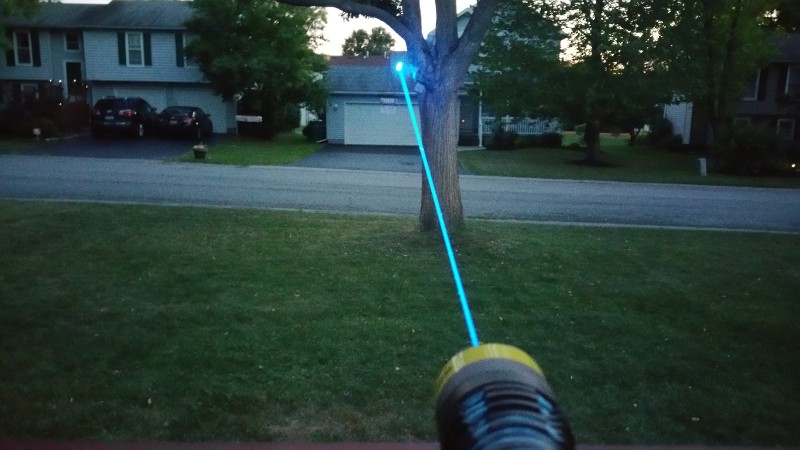 I'll be adding shots with my other 2 07E to compare so I'm saving the second post slot. 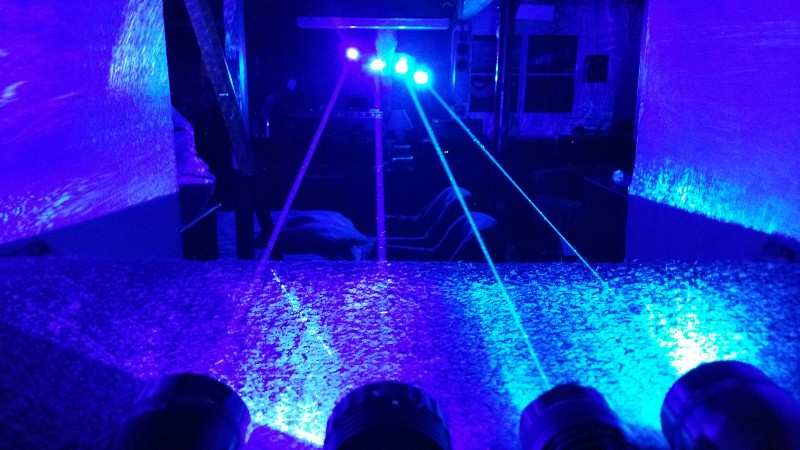 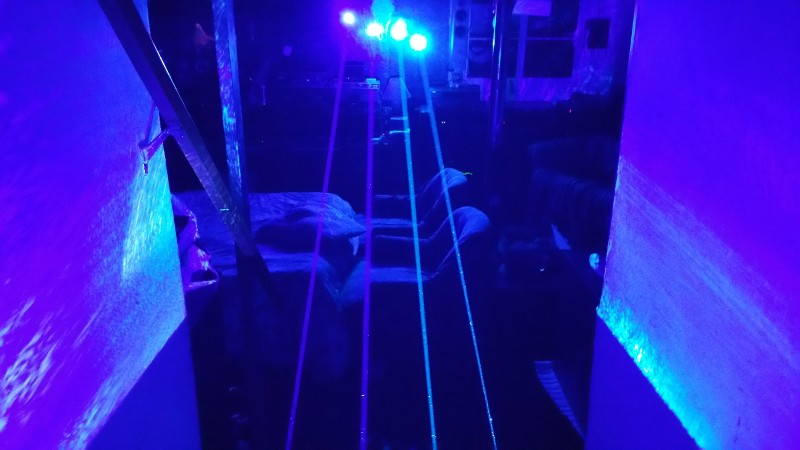 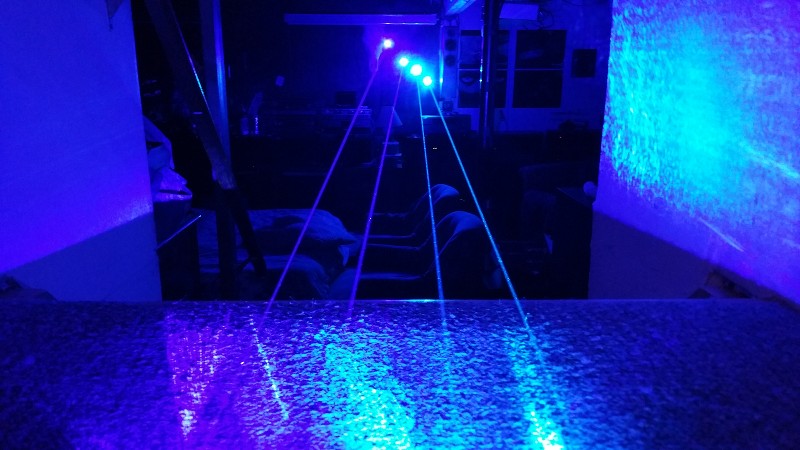 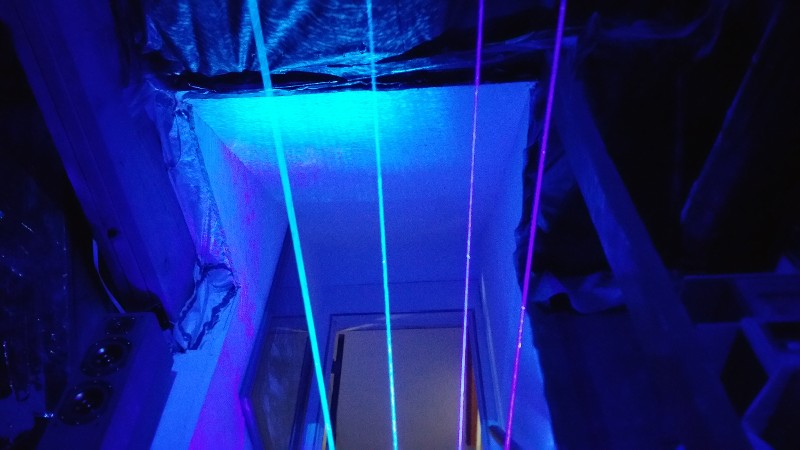 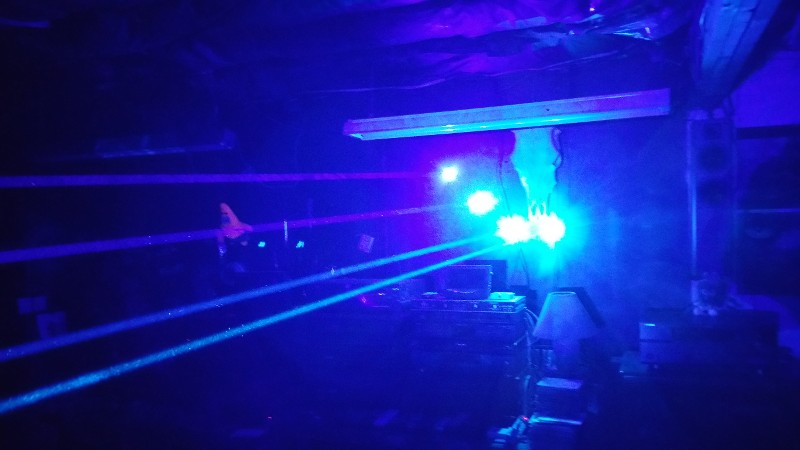 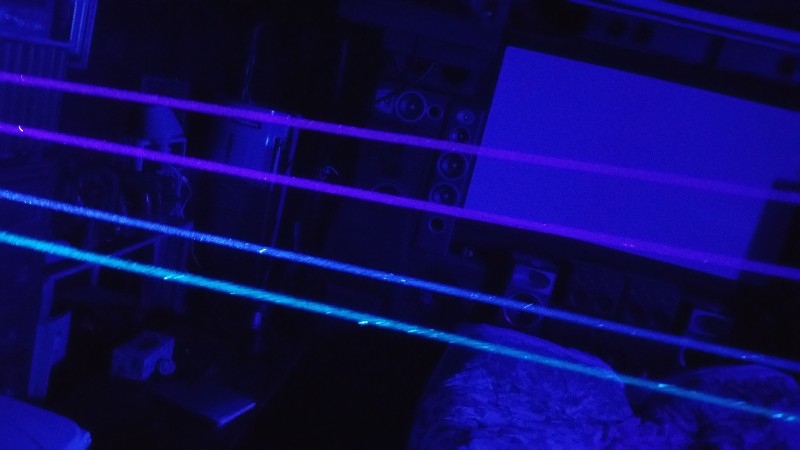 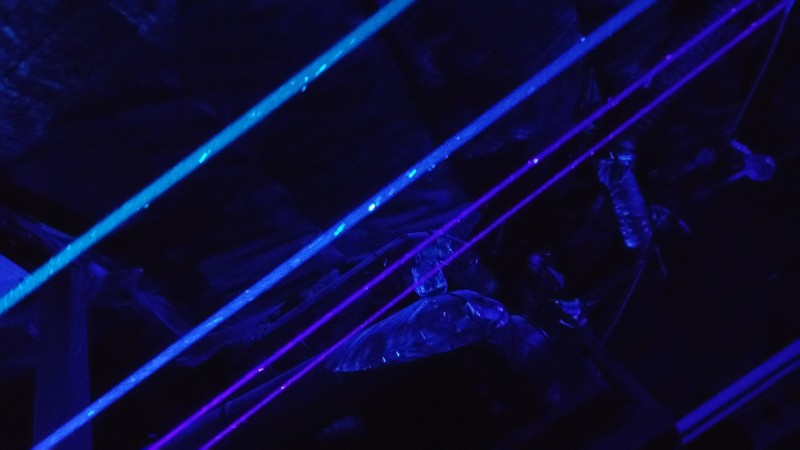 Nice work.
BTW, have you used a sanwu 3X expander yet?

Nice build I like it, believe I am leaning towards 07E for my PL-E host... but where did you get that huge heatsink for the mx-900?

Hey, what did that tree ever do to you?
#TREE LIVES MATTER!

Great build though and the outside shots are nice.
Last edited: Sep 6, 2016

Razako said:
Hey, what did that tree ever do to you?
#TREE LIVES MATTER!

Great build though and the outside shots are nice.
Click to expand...

Plus I think it set off his neighbor's car alarm
Love the heat sinking and that color:beer:

You can make your own easy, 1.5 inch round bar stock works, then you can attach to it.

Green with envy, :crackup: Har Dee Har Har, it's envious of those 5 watts too, I love green but the horsepower of the 515-520 directs is seriously lacking.
Last edited: Sep 6, 2016

I'll have to get back to all this but all 3 of my 07E are different colors. I have a 4.5A, 5A and 5.5A now. I also have a big problem as my desktop computer broke I've been working on it for hours but it's looking bad. Frustrated.
I broke down before my computer died and ordered a 44 as I already have a 4.5A driver.
Anyways, I have to figure out what I'm going to do at this point because I don't think its going to come back to life.

Another very nice laser build Pman.
Very cool to have three NUBM07E lasers at different current settings so that you can really compare the differing hues of the wavelengths at similar powers.

Where did you get the heatsink BTW?

Another powerhouse build for you to add to your "meager" laser collection! :crackup:
:gj:

Another well-documented build with awesome pics!
Thank you! :beer:

Interesting heatsinking.
So the color really looks like the last few pics show? It's beautiful.
What do the neighbors say?

Wells I got the comparison pics up and it was quite surprising to see that the new one has more green in it than the one pushed the hardest. You just never know what you are going to get.

My desktop is fried. Unfortunately everything was on it such as my email password and all my other passwords and I'm not going to remember what they all are. The hard drive works and I have it connected with a USB cord with an adapter to my old laptop. Anyone have any idea how I can find what my email login was from the drive or any other passwords for that matter? PM me. I'm kind of desperate to be honest as I need the emails. It has xp on it.

The heat sink came from Ehg I think when he was selling them or maybe it was Moh. Have one more left for the 44 I have coming. That one is the screw down back half type.
Last edited: Sep 7, 2016

Excellent pictures and step by step this time Pete. Those daytime shots, that's an accurate representation of the colour?! It's beautiful, I really think this diode is next on my list.
D

I really like the way the flashlight host looks. And who doesnt like the 07e. I would like to know more about that heatsink. I have 3 of these flashlights coming to me from the link you gave in one of your 44 how to threads. I really prefer the 12mm housing to go into a heatsink. I dont have all the proper tools for pressing diodes and a have a few loaded modules from Jordan waiting for a home.
You must log in or register to reply here.
Share:
Facebook Twitter Reddit Pinterest Tumblr WhatsApp Email Share Link