The cavity on the bottom (link) will make red, not sure how much though. The red output can probably do at least one watt out, maybe two, but due to the roll-off of the sensitivity to our eyes at the longer red wavelengths from 650 and up, I want a lot more output power than that to use the red section of this unit for that. I do however have a pair of recently acquired 10 watt red FAP diodes at 660 nm which have not been tested yet, they look new.

If you had these, what would you build with them? 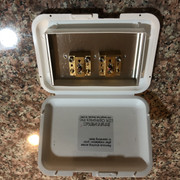 I was thinking PBS combining too, found them cheap on ebay but I imagine uber expensive from the manufacturer, they look new but need to confirm good.

If good, will need to use a long FAC lens and more optics to move the beam output to be less rectangular.

Alaskan said:
I was thinking PBS combining too, found them cheap on ebay but I imagine uber expensive from the manufacturer, they look new but need to confirm good.

If good, will need to use a long FAC lens and more optics to move the beam output to be less rectangular.
Click to expand...

If you can provide adequate test data on the pair, I would mount them directly to the copper slugs in my J20 hosts, use the largest copper piece I have, knife edge them, then combine them with a PBS NUBM44 v2 output, or just dichro mirror them with the 450nm 7W output, and get something like a bright pink output that's well expanded coming out the front (3-5x expansion), run all on 3*32500 cells or 2*32650 cells to retain the short grip style in my photo of the host that's gray and black. I shortened the handles as to not be 3*XX650 length but rather 2*XX700 length cells, max. Knocked about 60mm length off the original tubes. The switches they house, I remake using solid copper buttons, basically the whole host can easily support 30W output from diode lasers without breaking a sweat.

I actually have run dual boost-drivers fed with 24V input, each powering a string of 6x 6V XHP50.2 LEDs at 3.05A per string, which is about 40Vf per string, assuming 90% efficiency you're looking at roughly 265 watts total power inside the light, and it was able to handle this though after a few minutes it did get hot. With small slots between the fins milled and a high-static pressure small fan inside, with inlet and outlet separated by 3D printed internal ducting, this 265W could have been cooled to the point it would not become uncomfortable and therefore would not have to thermal-throttle power output ever.

One prototype arrangement of the host, which requires a lot more total work, as well as some custom pieces to act as battery-holders/airflow separation, it becomes possible to use 2 or 3 pairs of 21700 cells arranged side-by-side, as well as stacked, in the battery tube. The battery tube is nearly cut in half--two large slots run the length of the battery tube, which allow the 21700 cells (again, up to 6 in total for 11.1V 9600mAH pack, or two pairs stacked for a short 7.4V 9600mAh pack). The cells insert from the side of the tube this way instead of the end. This was prototyped to allow a smart Bluetooth PWM "brain" module inside the tailcap with wires running through the tube up into the head. However, what results from this arrangement, though somewhat odd, permits intake air from the very rear tailcap, past the batteries, pushed through heated copper components, to leave the front of the device, which actively cools the entire host rather than a portion like the head only. I am just trying to say that it is easily possible with this host to cool whatever your heart desires within the host.
Last edited: Jul 25, 2020

Alaskan said:
If you had these, what would you build with them?

I’d like to build a lab quality pointer (well, reasonably close to one) using PBS as you suggested too

Alaskan said:
I’d like to build a lab quality pointer (well, reasonably close to one) using PBS as you suggested too
Click to expand...

I'm thinking a spatial filter might really clean up the output if those have anything resembling a typical "bar" array output.. sort of mixes everything together "homogenizing" the output and lets you clip off any trash as well.
L

Exerd said:
Searched forum, no mention of this diode yet--which surprised me. It is not a triple beam, rather a double diode/beam multi-mode in 9mm package made by Ushio.

Here is the spec sheet PDF link from Ushio:

Apologies for replying to such an old post but...
So I ordered a Ushio HL63520HD directly from RPMC lasers so it cost a bundle!
Mating it with ACS4500UB set at the appropriate 2.4A. This ordered from DTR.
Using DTR'S 20mm case with aluminum back half so I'll be soldering the diode directly onto the driver and it will be floating not on a shelf since it's only at 2.4A.
Using host from Survival Lasers nothing fancy. Using two 3.7V 18650 batteries.
Anyway the diode is a duel emitter design which everyone tells me isn't great far away. Gonna start with DTR'S three element lense. Will post photos when done only just ordered all components.

Please if anyone has experience with this diode or duel emitter diodes share your wisdom with me. It has a two pin design, the anode splitting into the two emitters. Output is supposed to be 2.4w total. The diode has a huge aperture to it compared to what I'm used to so it looks serious!

Exerd said:
Searched forum, no mention of this diode yet--which surprised me. It is not a triple beam, rather a double diode/beam multi-mode in 9mm package made by Ushio.

Here is the spec sheet PDF link from Ushio:

Below are some shots of this diode. My camera gets particularly washed out by red light. The duel emitters are literally two sharp bar like beams(much sharper then the pictures show), each 1.2W to make a combined 2.4W. However ive tried a few diffetent lenses and can only change the shape of the beams from blade like to square not bring them together into one so its really two 1.2w beams. The shots here are using a three element lense but whether you use a G3 or G8 the beams remain very distinctly apart. The colour is 638nm of course and has a almost pinkish hue, QUITE PRETTY! They burn well when focused and I can get very sharp blade like beams even up in the sky when focusing. The diode is powered by a driver(from DTR) set at 2.4 amp as recommended by Ushio. DTR set me up with a 20mm heat sink and Survival Lasers the rest, S4X host etc nothing fancy. One very cool thing is that you get 2.4W total output from 2.4As so very efficient cool running diode. Sorry photos suck. Anyway surprised more people aren't into these duel emitter diodes, very neat diode.